After nearly exactly seven months of silence due to the global pandemic, the Winnipeg Symphony Orchestra once more filled the Centennial Concert Hall with the life-affirming sound of music, marking a triumphant return to the stage as it opened its 2020/21 season Friday night with Opening Night: Beethoven and Bach.

After nearly exactly seven months of silence due to the global pandemic, the Winnipeg Symphony Orchestra once more filled the Centennial Concert Hall with the life-affirming sound of music, marking a triumphant return to the stage as it opened its 2020/21 season Friday night with Opening Night: Beethoven and Bach.

The emotional first concert in its (A)bsolute Classics series that felt equal parts eerily surreal and feel good familiar fittingly featured WSO longtime concertmaster Gwen Hoebig, while essentially picking up where the Beethoven 250 celebrations left off early March with a pair of Back to Back Beethoven concerts. WSO associate conductor Julian Pellicano led the 90-minute (no intermission) program in lieu of Amsterdam-based maestro Daniel Raiskin, unable to appear on the podium this month due to COVID-19-related travel restrictions.

It became instantly clear that this is a leaner, meaner, streamlined organization that has responded with military-like precision to provincially mandated health and safety protocols, thanks to executive director Trudy Schroeder and her unflappable team. Some of those parameters include a scaled-down orchestra comprised of 40 physically distanced players — including its now-notorious “dangerous flutes” blowing behind large, protective Plexiglas shields — a capped audience size of 420 listeners generously spaced throughout the hall, carefully timed and monitored entries and exits to avoid lobby congestion, as well as ubiquitous hand sanitizer stations.

Bravo to all for these rigorous measures that kept this reviewer in particular feeling safe and secure, with an additional live streaming option — an impressive 350 “views” at press time — now available for those preferring to listen from the comfort of their homes. WSO Marketing and Communications Manager Claudia Garcia de la Huerta served as an affable host for this “very special night” from her seat at the front of the house, providing verbal program notes that often made the evening feel a live-to-air radio broadcast.

One of the silver linings during this season of COVID-19 has been garnering greater appreciation for what — or whom — we have right in our own back yards. The first of those Winnipeg-based musicians being showcased all year long is Hoebig, rightfully given pride of place who proceeded to treat listeners to her joyful performance of J. S. Bach’s Violin Concerto in E major, BWV 1042 that brims with ebullience and high-spirited optimism.

The violinist immediately launched into its first movement, Allegro with crisp attack and virtuosic runs, projecting her sound throughout the entire hall while navigating the unprecedented challenge of performing as featured soloist against an ensemble of players spaced two metres apart. Fortunately, Pellicano kept a taut rein on the musicians that ensured a surprisingly cohesive, and even intimate chamber sound despite a few early, minor hiccups that may have been alleviated by bolder basses.

The central Adagio is the beating heart of the roughly 18-minute piece, with Hoebig once again allowing her lyrical melodic passages to soar, underpinned by effective dynamic shading during this truly eloquent performance. She also dug in hard during the finale Allegro assai, proving once again that her incomparable artistry as one of the country’s finest violinists is going strong, now astonishingly in her fourth decade with the WSO that earned her rousing applause and cheers of bravo from the crowd of 369.

The late, Pulitzer-prize winning African-American composer George Walker’s Lyric for Strings became another gem, chosen by Raiskin to give voice and presence to Black composers and musicians, and inspired by the Black Lives Matter movement and global awakening to the perils of systemic racism.

The highly introspective work also provided a note of solemn contrast for the program, from its hushed opening through to final peaceful cadence, with Pellicano’s sensitive approach breathing life into its compact structures with its noble gravitas befitting the times.

The evening that opened with a lively rendition of Beethoven’s Egmont Overture bookended with the German composer’s Symphony No. 7 in A major, Op. 92 with a special nod paid to the respective brass and wind sections that made each of their exposed passages count, with (literally) no room to hide on stage as they performed as cohesive units despite the necessary chasmic spacing. When 21st-century ears are accustomed to hearing Beethoven delivered loud ‘n’ proud, it admittedly took a while to adjust to the lighter textures and decidedly more spacious, even buoyant sound.

However it also quickly became clear that this new normal performance offered Beethoven distilled, infused by the German composer’s indomitable spirit of resolve and resilience still intact and ringing throughout the hall.

The appreciative crowd seemed to agree, springing to their feet with more cheers and whistles through facial masks, as Pellicano took his own bow with his hand on his heart — a final, fitting image emblematic for a historic, and transcendent evening as the new season begins. 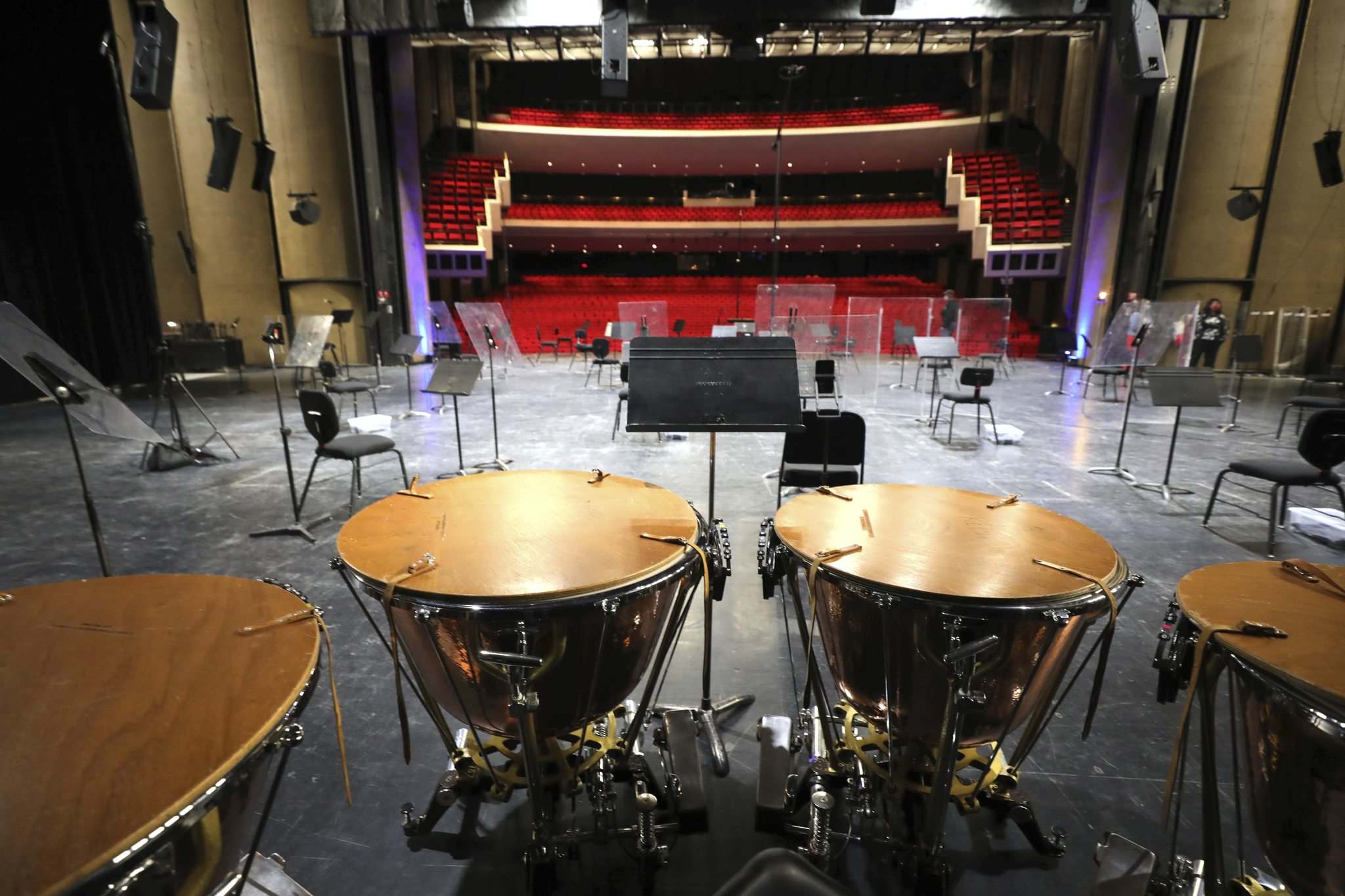