For the first time in his 15-year-career, Winnipeg illusionist Darcy Oake will literally be playing with reality.

For the first time in his 15-year-career, Winnipeg illusionist Darcy Oake will literally be playing with reality.

He’ll hang by his ankles five metres above the ground, bound by a straitjacket. Reality will be waiting — with giant metal jaws held open by a piece of burning rope — to devour him if he doesn’t get out in time.

“It’s a race-against-time type of effect,” says Oake, 24, who will perform the stunt at three shows at the Royal Manitoba Theatre Centre this Thursday and Friday.

Escaping Reality is his first full-scale solo show in his hometown. It’s also a benefit to raise money and awareness for the Bruce Oake Memorial Fund.

The magician’s older brother and only sibling didn’t escape from his own deadly trap of addiction. The eldest son of Winnipeg-based CBC sportscaster Scott Oake and his wife Anne, a nurse, died in Calgary of a drug overdose on March 28, 2011, at the age of 25. The former Canada Games boxer was one of 36,000 people who died from an overdose in North America that year.

“This is what brings me closure, doing stuff to keep his legacy going,” says Darcy, sitting in the cluttered Exchange District warehouse space where he’s been testing the jaws prop (which looks like something out of the Saw movies).

Bruce, older by two years, was his best friend. And while he may have been a hard-core addict, his brother says, he was also an athlete and a musician who grew up in the suburbs with a loving and supportive family who did everything they could to pull him back from the abyss.

“Addiction is not reserved for lower-class people. It has no prejudice,” says Darcy, whose right arm and shoulder is a tattooed shrine to his sibling. There’s a line from one of Bruce’s songs, the dates of his birth and his death, the letter B, and a guardian angel.

“When you’re an addict, your day, your whole life revolves around when you’re going to get your next fix.”

The award-winning illusionist from Linden Woods, who performed his first magic show at age 10, threw himself into his work after Bruce died, signing a contract for a run of shows that kept him on the road for nearly six months. The tour included a six-week gig at a casino in Slovenia — the “most tranquil” place he’s ever been to — and a stint aboard a cruise ship that sailed between Sweden and Finland that saw him perform nightly shows for four months straight, without a day off.

“It was perfect,” Darcy recalls. “It was almost like the universe knew what I needed. But I knew I couldn’t come home from that and not have something to work toward.”

The memorial fund is helping the Oake family find meaning in Bruce’s death, he says. Their goal is to raise enough money to build an alcohol and drug recovery centre in Winnipeg.

They want to model it after Simon House, a long-term treatment centre in Calgary with one of the highest success rates in North America — and the only rehab facility where Bruce had any lasting success.

Finding Simon House was “a gift,” Darcy recalls, after Bruce’s repeated attempts at 40-day treatment programs where he’d go in, get clean, get out and then fall back in with the wrong crowd and start the cycle all over again.

There’s a term that people use in the world of addiction to describe places like that for hard-core addicts — “rinse and wash,” says Scott Oake, sports anchor on CBC’s 24 Hours from 1979-89.

Bruce, whose drugs of choice ranged from crystal meth to OxyContin to heroin, was in and out of rehab four times, his dad says. His battle with addiction, which likely started with marijuana in high school, took him to facilities in Winnipeg, Toronto (a private and costly rehab centre), Halifax and, finally, Calgary.

“He wanted to have a better life, for sure. But what happens with a lot of kids that age is treatment doesn’t work the first time,” the host of Hockey Night in Canada says during a phone interview from the road.

“You’re young and you want to have the life that your friends do. You want to be able to have a few drinks. And he couldn’t do it. It was all gateway stuff for him. He would get out of treatment and think he was doing good and before you know it, he was down that terrible road again. He needed a sober living facility.”

Simon House, which is funded mainly by donations and run by former addicts, uses a three-phrase, long-term treatment plan. Phase 1 is seven weeks of full-on rehab that’s rooted in the AA philosophy and offered free of charge to clients. After that, clients pay $40 a day.

Phases 2 and 3 provide ongoing support into transitional housing and independent living. Clients must have a full-time job, stay clean and sober and share in rent, utilities and food.

Bruce got through Phase 1 and was into Phase 2 when he decided he was ready to go it alone and things unravelled again, Scott says.

“But that year he had there offered him the most hope, and in our mind, probably what a lot of young addicts like him would need — long-term places where you’re responsible to do certain things and you’re watched carefully for the first while.

“We want to make Bruce’s life mean something, and to establish a facility like that in Manitoba would do it.”

The elder Oake, who volunteers at Siloam Mission twice a week when he’s not travelling to assignments, says he and his wife were visiting family in Nova Scotia when they got the call no parent ever wants to receive. Writing his obituary on the plane, they decided then and there that they weren’t going to hide the truth about their son, and so they wrote that he had lost his battle with addiction. Oake also talked about it in an interview with the Globe and Mail published last month.

The letters and expressions of gratitude they received in the ensuing weeks from relatives of addicts across the country affirmed the family’s decision to go public, Scott says.

“Sadly, we lost our son, but if other people can learn from it, can know that it’s not a shameful thing and maybe make choices that help their loved ones, then it’s worth it.”

Darcy says if his big brother were alive, he’d probably call him an “idiot” for the “jaws of death” stunt — which he still hadn’t rehearsed in its entirety (meaning upside down with the rope burning) at the time of this interview.

It will take a crew of 10 people to pull off the Escaping Reality show, which will have a live video feed projected on to a huge screen, Darcy says, to “ensure there’s no trickery.” His signature bird act, in which he makes parakeets and doves appear and disappear, is also on the bill.

The St. Paul’s High School grad, who did his first paid Las Vegas gig back in March — and whose current performing style might be described as somewhere between David Copperfield and Criss Angel — turned down a two-month contract with a circus-style show at Expo 2012 in South Korea to focus on the memorial fund and to do this week’s show as a benefit.

There will be a segment about Bruce, and his family’s journey through the grief of losing him, but Darcy says the vibe will be positive, and that he’s not using the fund as a crutch to sell tickets.

“It’s a benefit, but it’s also a show I’ve had on the road for six months and have been working on and honing,” he says.

“We’re coming out with guns blazing with this one. Half the stuff I’m doing in this show has never been done in Winnipeg.”

— Addictions Foundation Manitoba (AFM, www.afm.mb.ca) has 23 offices across the province and two residential facilities in Winnipeg — a 36-bed men’s facility and one with 12 beds for women.

— In 2011, AFM provided service to 10,109 clients in residential and community and school-based programs. 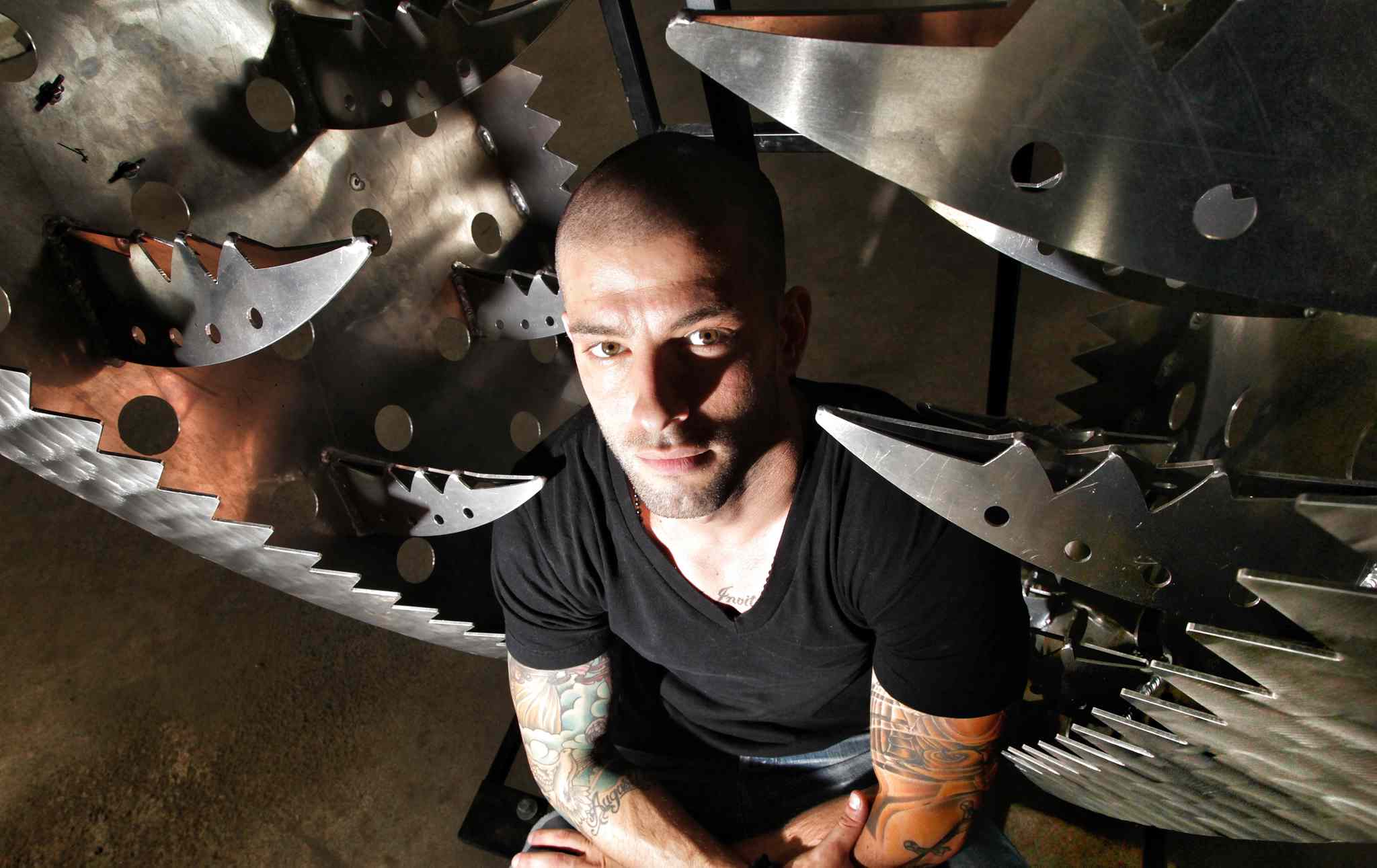