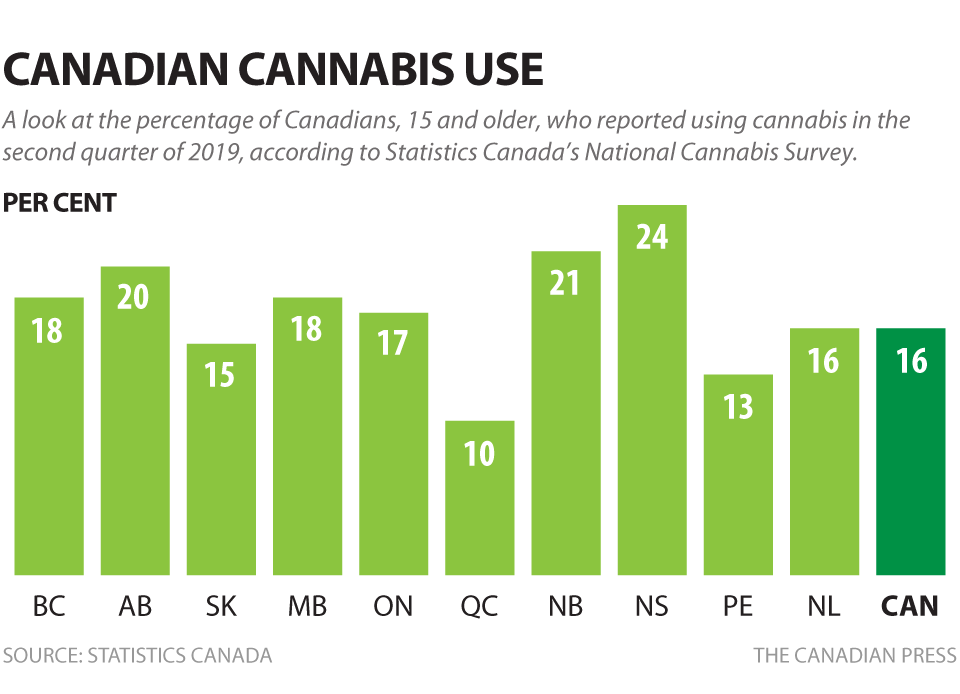 "Our sense was that we were almost at a saturation point, that people that were interested in using cannabis are using cannabis... Seeing those numbers not change, I think, is reassuring from a public health perspective," she said.

The statistically significant annual increase in cannabis use among the oldest group of Canadians didn't surprise Balneaves, either. She said an octogenarian recently approached her at a social event and asked if Balneaves would educate her bridge group about cannabis.

"She says, 'We usually have a glass of wine, but we're all saying, well, now that it's legal, and before we die, we want to try it'... In the older population, I think we're just seeing people feeling more comfortable with using cannabis, now that it's not an illegal substance."

The national data bureau's Thursday release also highlighted significant differences in the ways cannabis is used by Canadian women and men. Males used cannabis at a 21 per cent rate in the first half of the year, nearly twice the 12 per cent use rate for females.

The higher rates of medical cannabis use among females might "represent an idea that women may have a higher prevalence of physical and mental health symptoms for which they might use cannabis medically or therapeutically," Valleriani said.

"It could be that there are women who are just self-medicating with cannabis for untreated ailments," she added.

"But also, I think that there's something there that reflects that women are just more likely to rationalize, and think about, their cannabis use as medical. And I think part of that is around, consciously or not consciously, wanting to distance themselves from the stigma of substance use."

Statistics Canada found smoking is still Canada's favourite way to use cannabis, employed by 68 per cent of male users and 62 per cent of females. But, compared to men, female users were nearly three times likelier to use alternative methods of consumption, such as topical creams or orally-administered oils.

"Although a lot of our members do consume cannabis through inhalation, in addition to other methods, there is a widespread prevalence and curiosity in terms of other methods of ingestion, specifically making their own topicals or edibles," Brown said.

Updated on Friday, August 16, 2019 at 4:13 PM CDT: Corrects erroneous repetition of "per cent" in final paragraph.