VANCOUVER - Protesters against the federally-owned Trans Mountain pipeline gathered outside the Vancouver Art Gallery on Saturday to show the government and investors that opposition to the project is still strong and they believe funding it would be a "risky investment."

VANCOUVER – Protesters against the federally-owned Trans Mountain pipeline gathered outside the Vancouver Art Gallery on Saturday to show the government and investors that opposition to the project is still strong and they believe funding it would be a “risky investment.”

Signs that read “Don’t fund the Trans Mountain,” “Protect the Ocean” and “Protect the Land” littered the square in front of the gallery where a few hundred people gathered.

Rally planners from the Tsleil-Waututh First Nation’s Sacred Trust Initiative say this marked the first time since the COVID-19 pandemic began that Indigenous leaders have come together to publicly oppose the pipeline.

Rueben George, manager of the Sacred Trust Initiative, says the pandemic restricted gatherings and hindered their outreach, but that the rally will lift spirits and signal the start of more events and public outreach.

The federal government said in February that no more public money would go toward the pipeline as its new projected price tag increased to $21.4 billion.

George says the project now relies on funding from investors and the group hopes to send the message that it is a “stranded asset” and should not be built.

“It’s not a good investment, let alone the destruction that’s going to cause,” he said. “We have to wake up our country again. We have to do something to create change for our future generations.”

The federal government paid $4.5 billion dollars to take over the expansion project from Kinder Morgan in 2018 in a bid to almost triple the amount of crude oil moving from Alberta to customers overseas.

The pipeline expansion was originally expected to be complete sometime this year but the Trans Mountain Corporation also pushed back the projected completion date to the third quarter of 2023. It said severe flooding in southern B.C. last fall, coupled with the effects of the COVID-19 pandemic, forced the delays.

This report by The Canadian Press was first published April 9, 2022.

This story was produced with the financial assistance of the Meta and Canadian Press News Fellowship.

Trans Mountain to result in loss for government 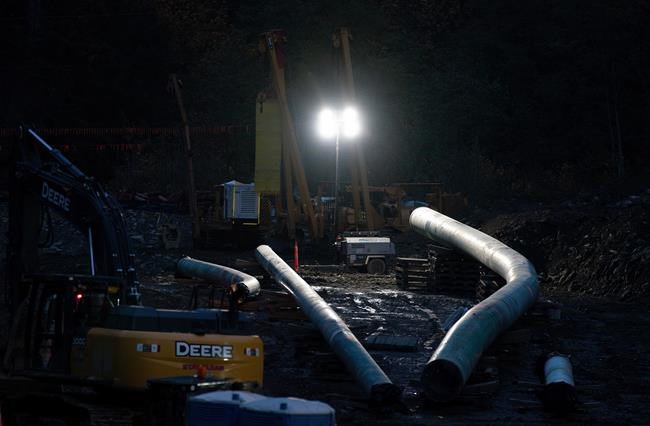