Port on the Prairies

WINNIPEG — You can call it organized chaos. But the vice-president of Winnipeg-based Richlu Manufacturing has an even more colourful description for the perfect storm of supply and demand that keeps the workwear maker humming along like a high-performance engine.

WINNIPEG — You can call it organized chaos. But the vice-president of Winnipeg-based Richlu Manufacturing has an even more colourful description for the perfect storm of supply and demand that keeps the workwear maker humming along like a high-performance engine.

"It’s spaghetti," says Gavin Rich, partner in the family-owned company that manufactures the workwear line Tough Duck, one of many lines sold worldwide.

"You’re talking about fabric that comes from Asia that could be manufactured there, in Europe or Winnipeg — it could be shipped back here or anywhere."

But without this complex and well-organized web of suppliers, manufacturers and distributors, the family-owned business wouldn’t be where it is today: thriving despite the odds and challenges it has had to overcome in recent years.

"Right now, having a quality product at a good price just gets you to the table," Rich says. A decade ago, those two attributes were a competitive advantage. But as manufacturing has quickly moved to Asia, Canadian-based companies have had to change the way they do business.

The process has been painful. Local factories have closed, workers laid off and most manufacturing now takes place overseas.

"How do you compete with China?" Rich asks.

The answer, he says, lies with logistics — the management of supply lines, a term with roots in military history, stretching back to Alexander the Great. Logistics have always played a critical role in military success. Armies are only as effective as they are efficient at moving steady supplies of food, weapons and other goods.

The same could be said for modern-day manufacturers.

Innovation in logistics has been the competitive advantage manufacturers such as Richlu have needed to compete in the global marketplace. But Winnipeg’s long history as a transportation centre has made the evolution easier for many Manitoba-based businesses than those in other parts of Canada.

"This is a city that is built on transportation and facilitating trade," says Barry Prentice, a professor at the Asper School of Business at the University of Manitoba. "We’ve been a gateway to the West, and more so, we’ve become a gateway to the U.S. after the free-trade agreement."

Since NAFTA came into being in the mid-’90s, trade with the Midwest and southern U.S. and even Mexico has steadily increased.

But Winnipeg’s trade advantage hasn’t been only its location at the heart of the continent. A strong foundation of infrastructure — robust trucking, the intersection of three railways and a 24-hour airport — has helped build and sustain the city’s track record as a national leader for logistics, transportation and manufacturing, says Winnipeg Chamber of Commerce president Dave Angus.

These sectors, however, have faced significant challenges, including location. Although it’s often stated that Winnipeg is in the centre of the continent, it is also farther away from major U.S. centres than Toronto, Montreal or Vancouver.

"Historically, our challenge has been we’ve been isolated from markets," Angus says. "But if you look at our catchment area in today’s terms, we have a fairly large catchment area from Chicago to Minneapolis to Thunder Bay and into Saskatchewan."

And Manitoba-based companies’ trade with the rest of the world has continued to grow steadily over the last decade. Global exports grew to $11 billion in 2007 from about $9 billion in 2003. The recent economic slowdown has had a dampening effect on growth, but the co-owner of a local third-party logistics company says Winnipeg is better able to weather the storm because many companies have become very resilient in overcoming persistent marketplace challenges such as fluctuating currencies.

"Over the last 10 years, I’ve seen more changes and swings to exchange rates and export than I’ve ever seen," says Jonathon Gershman, co-owner of G2 Logistics, a medium-size firm that does about 600 loads a month in and out of Winnipeg.

"Between the U.S. dollar swinging back and forth and its effect on manufacturing and exports as a whole, carriers can’t seem to find a niche they can be good at because every (financial) quarter is making them change."

Still, G2 has managed to grow every year since its inception in early 2000, he says, mainly because the company has been proactive in anticipating change.

When the loonie drops compared to the U.S. dollar, exports from Canada go up, and so does business from local Canadian clients, Gershman says. When the opposite occurs, G2 has to look for clients who could benefit from a strong U.S. dollar, bringing in goods from the U.S. to Canada at lower cost.

For many companies such as G2 and Richlu, what didn’t close them down made them stronger, Angus says.

"What our companies have done is invest in new technology, training and lean processes to get costs down and be more competitive," he says.

But Manitoba companies haven’t been the only forward-thinking players in maintaining and developing the province’s transportation and logistics strength. All three levels of government have been playing an active role in helping these sectors remain vital into the future.

Last year, the federal and provincial governments announced the creation of CentrePort, a 20,000-acre inland port around the soon-to-be-renovated James A. Richardson International Airport. The development is essential to the long-term vision of securing Winnipeg’s future as a transportation, distribution, warehousing and manufacturing hub.

"It’s probably going to be bigger than most people can imagine, simply because we don’t have a centre-port in Canada," says Kerry Hawkins, the recently appointed chairman of CentrePort Canada.

The notion of an inland port certainly is not a new concept. Several U.S. cities have built centre-ports in recent years for trade and regional economies, including Huntsville, Alabama.

"About 20 years ago, it was just a soybean field," Hawkins says about Huntsville. "Today, they employ about 20,000 people and investment is approaching $15 billion."

Hawkins says CentrePort Canada will follow a blueprint similar to Huntsville’s, building up infrastructure around the airport to create an economic hub to serve not just North America, but the entire world.

Already, many of the pieces to build a successful inland port are in place. Winnipeg is well-served by rail. The CP, CN and Burlington Northern Sante Fe lines converge here. And the city boasts some of the largest trucking companies in Canada, including Bison Transport, Paul’s Hauling Ltd., TransX and Reimer Express.

But the city’s airport, which has an abundance of runway space for transport aircraft and runs 24 hours a day, is the linchpin to CentrePort’s success.

"Location gives us the advantage of being the shortest distance from North America to Europe and Asia because the planes come over the Pole and refuel here," Hawkins says.

Combine all those assets and future growth of trade from shipping through the Port of Churchill, and the potential economic growth is enormous.

The big economic payoff may be a decade or more away, but already government funding is flowing. The provincial and federal governments have invested $212 million to build a four-lane highway directly to the airport from the Trans-Canada Highway to facilitate loading and unloading of air cargo. That cargo is expected to increase as business builds up around the airport.

"Transportation, manufacturing and trade go hand in hand, and that’s the beauty of CentrePort," Angus says. "We will be able to develop our transportation assets based on what manufacturers and organizations are looking for in today’s world."

Any plans to enhance Winnipeg’s economic strength is good news for businesses such as Richlu, which are increasingly reliant on efficient, fast and cost-effective supply-chain management to stay competitive.

"We’re still trying to figure out what CentrePort will mean for our business," Rich says.

"But anything that can get our product to our customer faster, more easily and without additional cost will definitely be good for business."

Manitoba-based logistics and transport players at a glance: 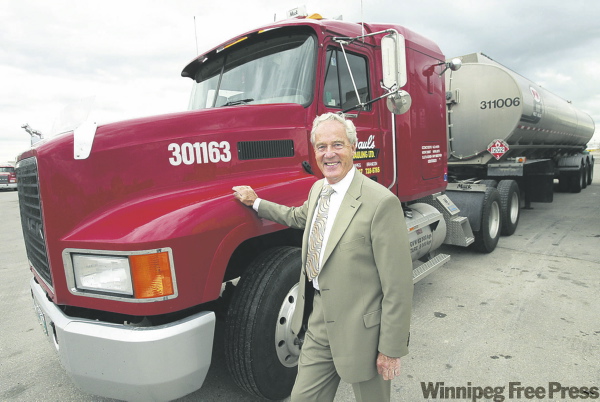