One of Winnipeg's oldest eateries was once home to city council

The wrecking ball will replace chicken balls at the Shanghai Restaurant building if city council allows the Chinatown structure to be demolished to make way for a housing complex.

The wrecking ball will replace chicken balls at the Shanghai Restaurant building if city council allows the Chinatown structure to be demolished to make way for a housing complex.

The owners of the King Street property want to wind down their business — one of Winnipeg’s oldest and best-known restaurants — and sell the 128-year-old structure to the Chinatown Development Corp., according to a city property report published on Thursday.

The corporation originally wanted to demolish the property and operate a surface parking lot on the site while developing a plan for a housing complex, according to the report.

However, the city stepped in and made it clear no demolition will be permitted until a firm redevelopment plan is developed and a building permit has been taken out, said Deepak Joshi, director of city planning.

“In the meantime, they won’t be allowed to demolish,” Joshi said. “But if they know they can get a development permit, they can put together a business plan and raise some money.”

Built in 1882, the year after Winnipeg’s first real-estate boom, what was originally known as the Robert Block was one of the Exchange District’s first mixed-use buildings, housing commercial spaces on the main floor and offices and suites upstairs.

Winnipeg’s mayor and city council occupied the main floor from 1883 to 1886, when the first city hall was under construction. Shanghai Restaurant was established on the main floor in the 1940s and still sports some of its vintage decor.

The stone and brick building was rated a Grade III heritage structure — the lowest form of heritage status — by the city’s historical buildings committee following an assessment in December 2009.

The committee wants to place the Shanghai on the Buildings Conservation List and protect it from demolition, noting it fills an entire block of King Street from Pacific Avenue to Alexander Avenue.

However, city property managers recommend council ignore that suggestion because the building’s “long-term economic viability is questionable,” according to a report that comes before council’s property and development committee on Monday.

“I don’t think there’s much hope for the current structure,” said North Kildonan Coun. Jeff Browaty, the committee’s chairman, who supports the idea of allowing demolition if the Chinatown Development Corp. has a firm plan to create housing on the site.

“I personally have fond memories of having my first Chinese food at the Shanghai and one of my last memories of (late Charleswood councillor) Bill Clement was eating there. It’s a neat piece of our history,” Browaty said.

Heritage Winnipeg opposes the demolition and said the city should insist on some form of adaptive reuse of the Shanghai building.

“They shouldn’t be going that far. Have they looked at other options for that building?” executive director Cindy Tugwell asked. “They do this all the time. Now we have to come down there and fight it.”

The Shanghai Restaurant’s manager declined to comment on Thursday evening.

Shanghai building can be demolished if site is redeveloped: city committee 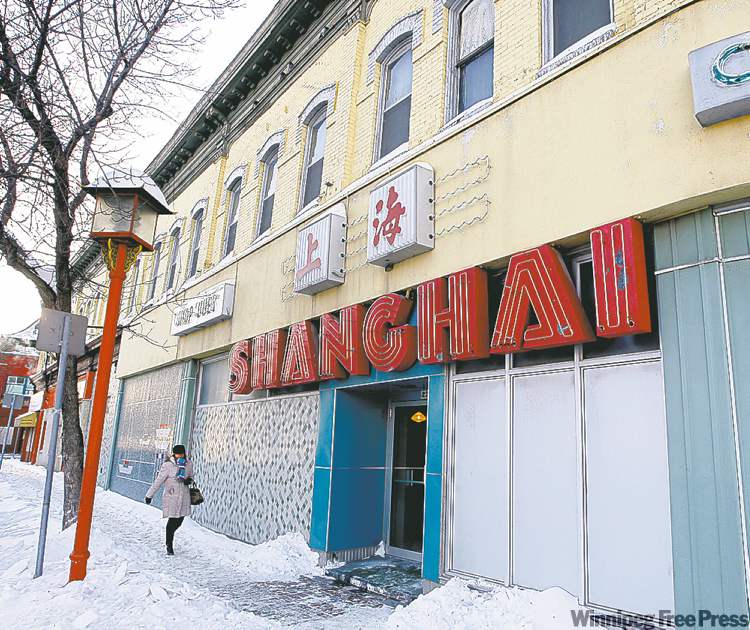 Original use: First known as the Robert Block, a mixed-use building featuring commercial spaces on the main floor and offices and suites on the second floor. Later renamed the Coronation Block.

Temporary city hall: From 1883 to 1886, housed council chambers and the mayor’s office during the construction of Winnipeg’s first city hall.

Shanghai Restaurant: Established on the north end of the ground floor in the 1940s.

Current prospect: The owner wants to sell it to the Chinatown Development Corp., which would demolish it to make room for a housing development.