Trying to sell the Atlanta Thrashers while continually losing money has taken its toll on the team's owners to the point where they may be ready to give up on the NHL in Georgia.

Trying to sell the Atlanta Thrashers while continually losing money has taken its toll on the team’s owners to the point where they may be ready to give up on the NHL in Georgia.

Thrashers co-owner Michael Gearon told the Atlanta Journal-Constitution he and his partners need new investor blood now or they’ll look to sell the team to a buyer with relocation plans.

“If we are faced with that as the only alternative, that’s what’s going to happen,” said Gearon. “I don’t think there is an ability to stomach another $20 million in losses. We just can’t do it. The reality is we need fans showing up and we need investors, or a primary investor.”

Gearon is a member of the Atlanta Spirit group that owns the Thrashers and the NBA’s Atlanta Hawks. The group has reportedly lost more than $130 million since 2005 with the franchise value dropping in excess of $50 million over that time.

One source described the Thrashers ownership situation as a “last ditch effort to keep the team in Atlanta,” and said the timeline is, “weeks and not months.”

Gearon appeared on Atlanta radio Wednesday afternoon and when asked if fans should be worried about moving vans pulling up to the rink at season’s end, he tap danced his way around the question.

“I have no intention of moving the team out of town and that’s why it’s important that we’re in a position to talk publicly about this and to appeal to our fans and the people of Atlanta,” said Gearon. “I’m not hitting a panic button and I apologize if it comes across that way… I just want to appeal to our fan base and people in the community to get on board with us.”

Gearon and his partners have taken their medicine in Atlanta for some time and the NHL is aware of their woes.

NHL deputy commissioner Bill Daly offered no comment on Wednesday but in January he talked to Winnipeg radio program The Illegal Curve about the Thrashers future in Atlanta.

“We’re going to have to look at the long-term prospects of that franchise, and if the determination is made that it can’t make it there, and can’t be successful there, then something will have to be done,” Daly said.

The NHL still owns the Phoenix Coyotes but believes closure on that front is imminent. It’s unlikely the league will entertain talk of franchise relocation until the Coyotes drama is over.

News of a potential sale and relocation of an NHL franchise will again kickstart talk of Winnipeg, Quebec City and Hamilton as possible markets.

There is plenty of hyperbole surrounding all three markets but a few undisputable facts.

Winnipeg is the only city of the three to have an NHL calibre rink.

Winnipeg has bulletproof ownership in the form of True North Sports and Entertainment.

The NHL and True North worked on a purchase agreement for the Coyotes last spring and league commissioner Gary Bettman has praised the approach of True North.

True North has a veteran and experienced hockey franchise operator in Mark Chipman, who has owned the Manitoba Moose for 15 years.

True North’s financial sheets are impeccable between the Chipman and Thomson families. The Chipman’s run a thriving empire based in Winnipeg while Forbes lists David Thomson as the world’s 20th richest man, with an estimated fortune of more than $19 billion.

Thrashers ownership is in the last year of its seven-year relocation covenant with the NHL. The covenant is a promise from owners not to move their franchise for seven years and is part of the consent agreement all owners sign when they buy a team.

Atlanta Spirit bought the Thrashers in March of 2004 and will be in position to request a relocation sale for this fall.

Daly's 'no comment' on Atlanta adds to NHL buzz 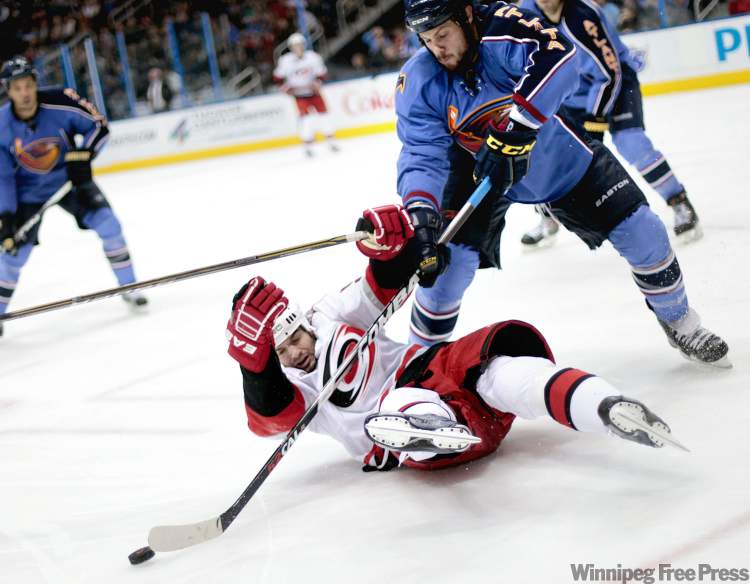 Fast facts on the Thrashers

Flames franchise was transferred to Calgary for the 1980-81 season

Owned by Atlanta Spirit, a conglomerate led by Michael Gearon and Bruce Levenson