At the top of their division with six wins in their first nine games, the Winnipeg Goldeyes are bringing their road show home to Shaw Park.

At the top of their division with six wins in their first nine games, the Winnipeg Goldeyes are bringing their road show home to Shaw Park.

More than 7,100 tickets have been sold for tonight’s 7 p.m. game against the Amarillo Sox, which will open Winnipeg’s home schedule and is the first of three against the Sox.

The Goldeyes met the Sox in the season-opening series for both teams, a three-game sweep by the Goldeyes in Amarillo National Bank Sox Stadium, May 18-20.

Amarillo (6-4) leads the South Division and is on a six-game winning streak.

“I think this is why a lot of guys want to play here, they want to see what the atmosphere is like,” said Goldeyes manager Rick Forney. “Hopefully we can cram 7,500, 8,000 people in here and create an environment that’s fun for our guys to play in and very uncomfortable for the Amarillo team to play in. I know they’re glad to get off the road and get back here. It’s a fun place to play, they know that and they’re looking forward to it.”

Goldeyes’ third baseman Amos Ramon, who technically has already played at home to open the season since he’s from Texas, gets another home opener as he now makes his permanent home in Winnipeg.

“We’re all excited to be home and to play in front of our home crowd, we’ve heard it’s probably going to be sold out. I don’t think a lot of these guys understand that Winnipeg fans are unbelievable,” Ramon said.

The Goldeyes got to play in front of a crowd of 6,616 school children in Laredo on May 23 but the place was nearly empty after the sixth inning.

“People don’t leave here until the ninth inning or when the game’s over. It’s going to be loud, energetic and I just can’t wait.”

With the Goldeyes expected to be down possibly three bodies due to the suspensions of left-fielder Jon Weber (two games) and first baseman Yurendell de Caster (one game) and Kyle Day battling a leg injury, there’s going to be some lineup changes.

“Being Canadian and playing a home-opener in Canada is going to be very special,” said David Narodowski, a Vancouver native and the only Canadian on the team. He got his first start on May 21 playing second base in a 5-1 loss to Laredo and has also seen some action at third base, first base, and as a pinch-hitter, pinch-runner and designated hitter.

“I’ve played a bit everywhere but if I have a chance to start, the pressure will be on me to show Rick what I have to offer. I haven’t really felt like I’ve been able to show what I can do with the limited time that I’ve had,” he said.

The Goldeyes gathered at Shaw Park on Monday night after a 27-hour bus ride back from Saturday’s game in El Paso, Texas, for a special reception with season-ticket and ticket-package holders. It was their first venture into Shaw Park since May 12 when the team departed for the 17-day road trip.

Forney has said “your team’s mettle gets tested” on the road that long so early in the season.

“We didn’t play our best brand of baseball for nine complete innings every day but they found a way to win games and win them late,” Forney said. “They showed a lot of grit out there and I was real proud of them.”

In three of their six wins, the Goldeyes scored the winning runs in their last at-bat.

— When left-fielder/designated hitter Jon Weber returns Thursday after serving his two-game suspension, get ready to see one of the league’s steadiest producers at the plate. Weber leads the Goldeyes with a .415 average and four doubles.

— Goldeyes pitcher Kaohi Downing is emerging early as the team’s ice man. Three of the six wins belong to him as a reliever and, also a capable infielder/outfielder, he can handle himself at the plate. He went 1-for-2 with a double and an RBI when he came into the game as a pinch-hitter in the 14-7 loss to El Paso last Saturday.

— Amarillo infielder Matt Tucker, the Pointstreak batter of the week, hit .515 and had 13 RBI last week against the Fargo-Moorhead RedHawks and the Laredo Lemurs. He had six extra-base hits including two home runs.

— Amarillo will have a difference face at first base from when the Goldeyes met the Sox in Amarillo. Cyle Hankerd, who played in all three Goldeyes’ wins there May 18-20, had his contract purchased by the Chicago White Sox. Alberto Espinoza, the team’s backup catcher, played first the past three games.

Weber, de Caster will be watching from stands 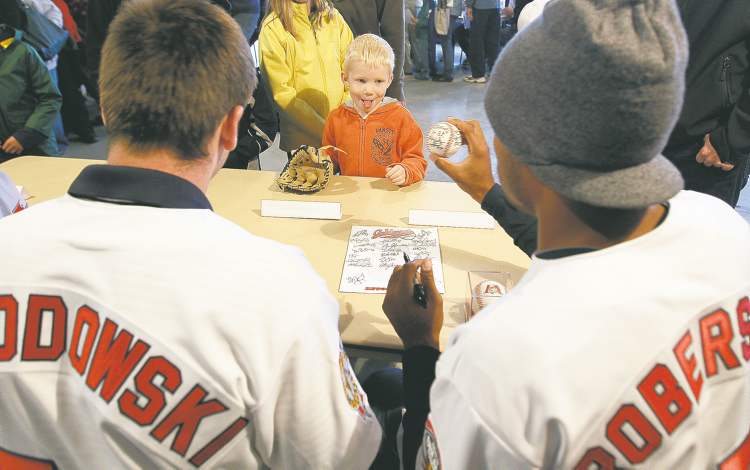