The Moment came with soccer victory

When I was a little girl, they still called hockey skates "boys' skates."

When I was a little girl, they still called hockey skates “boys’ skates.”

I learned this while shopping at a crowded athletic den in Winnipeg’s south end. A clerk arrived with a box of dainty white figure skates, but my wide child’s eyes were fixed on a different pair: big black ones with bold white swooshes and smooth toe steel.

God, they were glorious. They looked like television, and spotlights, and Stanley Cups.

“Oh, those aren’t for you. Those are boys’ skates,” someone said, and the gathered parents laughed.

Deflated, I sullenly banged my dainty white skates against the store bench.

I quit skating lessons not long after that. I’m 30 years old now, and I still have never worn a pair of hockey skates.

Things have changed, of course. In the years since my skate-shopping humiliation, girls’ hockey programs have proliferated across Canada. Still, that was just one of the million little ways women have been told sports do not really belong to us. From underfunded or flat-out unfunded girls’ athletic programs to beer ads that showed men and men only as sports fans, the messages added up.

“Not for you,” these little things whispered. “You don’t belong here.”

Despite these whispers, the growth in women’s athletics over the latter half of the 20th century was astonishing, and the Olympics especially gave women a road to greatness. My mother grew up in an era when filmstrips instructed girls not to run during menstruation; I grew up in an era where Cindy Klassen’s powerful strides propelled her into history.

Still, Canada waited for The Moment. We waited for that brilliant breakthrough when an entire nation dropped whatever it was doing to watch women play, the same way we’ve done time and time again for men’s hockey and the Grey Cup, Superbowls and Usain Bolt.

Maybe it’s fitting The Moment should happen in 2012, at an Olympics that was advertised from the start as being all about women. For the first time, every country sent a female athlete to the Games, and Canada’s Olympic team actually featured more women athletes than men.

Other moments that mattered: Gabrielle Douglas flew into history as the first black woman to win all-around gymnastics gold. A very pregnant Malaysian athlete, Nur Suryani Mohamed Taibi, willed her unborn child to stay still as she took aim with her air rifle. Women’s boxing made its Olympic debut this year, after a long and sometimes sexist battle.

And then, in the midst of all these hopeful storylines of inclusion, Canada’s national women’s soccer team went out and did our national dialogue one better: They made us think of glory.

Almost four million Canadians were riveted as Christine Sinclair and her team took on the Americans in an explosive Monday match; that was a higher viewership even than the United States, where a healthy 2.92 million watched on NBCSN. When the referee made That Call, the country exploded in sympathetic frustration.

For four days, these women dominated front pages and sports call-in shows, blogs and watercoolers. The country rallied around them and tuned in early Thursday morning to cheer them to bronze.

So this, then, was The Moment we’ve been waiting for. Years from now, we’ll remember how it launched Sinclair from respected captain into a Canadian superstar; when the FIFA Women’s World Cup comes to Canada in 2015, we’ll remember the storylines laid at these Olympics and be glued to our screens again to see them continued.

And we will remember it again 16 years hence, when some glowing young woman freshly decorated with a medal breathlessly tells a reporter: “When I watched the 2012 soccer team win bronze, I knew I wanted to be on that podium someday too.”

Because most of all, this was the moment where thousands of Canadian girls turned on the TV and felt the electricity of an entire nation’s hopes and realized they, too, belong under the brightest of spotlights.

Not me, though. I will never be an athlete, now. Too old, and — if I’m being honest — too sedentary.

But on Thursday morning, when I watched Sinclair and her teammates streak down the field, all fire in their eyes and an entire country caught holding its breath as they ran, I felt something I hadn’t felt in a long time. A flicker of certain memories, a tugging at the feet.

This winter, I’m buying a pair of boys’ skates.

Except this time, nobody is going to laugh and not a soul will tell me “no.” 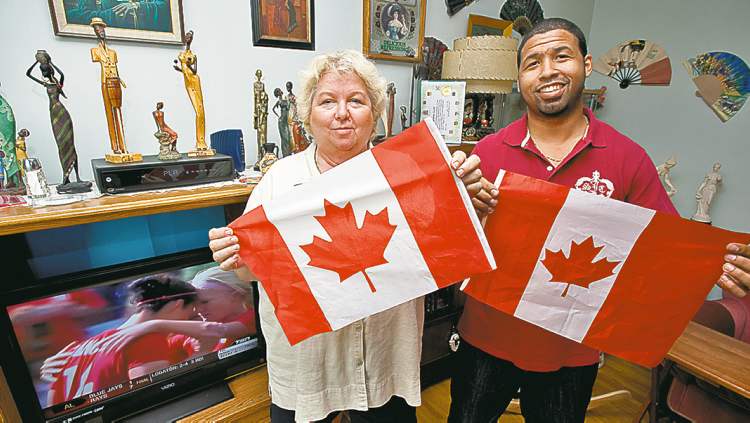 AS the Canadian women’s soccer team captured the nation’s imagination, fans voiced their delight on Twitter and comments on the Free Press website:

” ‘You play like a girl’ is probably the biggest compliment anybody can get right now.” — @justsherryj

“You are giving hope and excitement to many aspiring young girls. I know I have one who is outside kicking a ball against the fence right now ;)” — Sarah R

“Everyone remember this when tickets come out for the World Cup in 2015!” — KMC.

“Somebody get those girls some cigars and champagne!!” — Jann Arden

“I loved the moment that happened just after Matheson scored the game-winning goal and she grabbed the Canadian insignia on the right side of her jersey and held it out to look at it.” — Peter 12