It took $10,000 and a little persistence but Irv and Sandi Koch of Stonewall are now the proud new owners of Canad Inns Stadium's famous Appleton Rum Hut.

It took $10,000 and a little persistence but Irv and Sandi Koch of Stonewall are now the proud new owners of Canad Inns Stadium’s famous Appleton Rum Hut.

The couple, who have been Winnipeg Blue Bombers season-ticket holders since 1970, won the rum hut auction outside the Bomber Store at the stadium on Thursday and said it will definitely be put to good use.

It was a furious bidding war as Irv and another bidder fought for the right to buy the hut. The crowd erupted into cheers whenever either of the men raised the bid and an even bigger ovation erupted when Irv ultimately won the auction.

“I feel good,” said Irv. “We spent some time at the rum hut so I knew I wanted it. It’s probably going to eventually end up at the cabin out at Lac du Bonnet.”

Among those in the crowd, despite the freezing temperatures and heavy snow, were former Bomber greats Rod Hill and Chris Walby, who said from the start he was going to do whatever he could to raise the bids.

“I’m the spotter trying to get the bids up on this wonderful item and hoping to run into some people that will feel, out of the generosity of Christmas, to buy it and put it in my yard,” joked Walby.

Walby said there are good reasons the rum hut should be coveted by Bomber fans.

“Look at it. The thing is solid. It’s quality and above that there is a lot of history behind it and I think that is the biggest thing. Everyone has had a few Appletons there. It’s been a great gathering spot for years.”

The rum hut auction was the highlight of the evening but before being auctioned off, Bomber fans had the chance to bid on the section signs that once stood at Canad Inns Stadium. Not surprisingly, the section S sign got the highest bid of the night and was bought by Jay Porath for $300.

“It’s a classic piece,” Porath said. “You don’t get these opportunities everyday to get something so cool and so historic. I had to jump on it. It’s going right in my garage which is also my man pad.”

All proceeds from the sale of the rum hut are going to the Heart and Stroke Foundation. 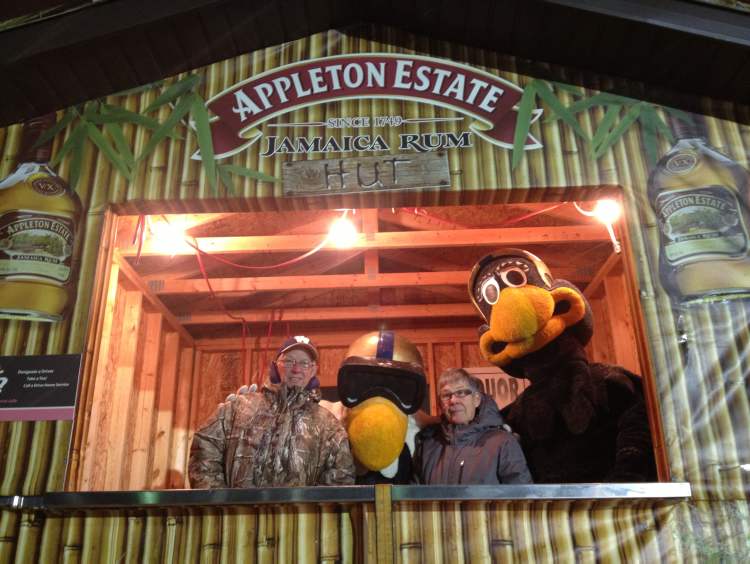