In an email exchange with the Free Press, Judt categorically refused the apology Robinson made late Friday afternoon, believing the MLA simply caved to political pressure from Premier Greg Selinger and critics within the Opposition party.

“I reject this false and insincere apology,” Judt wrote to the Free Press Sunday. “It’s nothing less than a stage-managed stunt by the NDP to get Eric Robinson off the hook.

“Anybody who saw how Robinson acted when APTN first reported on the racist email can see that the statement that was put out late Friday was not written by Robinson and doesn’t reflect his true feelings.”

The apology and its rejection stem from a Nov. 22 email exchange between Robinson and Nahanni Fontaine, special adviser on aboriginal women’s issues, which came to light via a Freedom of Information and Protection of Privacy Act (FIPPA) request Judt filed in December. In the series of messages, Robinson responds to a concern from Fontaine regarding a Free Press story about a burlesque-show fundraiser sponsored by a local clothing shop in support of Osborne House, a shelter for abused and battered women.

Robinson’s response indicated he did not see the story but would take a look at it. The last two lines of his email, lines that were supposed to be blacked out but are easily read when held up to the light, say:

“On the surface it is not a very good idea and moreover further exploits an already vulnerable group in society. It also further demonstrates the ignorance of do-good white people without giving it a second thought.”

On Thursday, a defiant Robinson told APTN he didn’t regret his choice of words regarding Judt and Osborne house. “No, absolutely not,” Robinson said to a reporter, “because you and I know there are a lot of those types around.” Later in the interview, Robinson stated he has “always spoken from my heart, I’ve always spoken what I felt” and that he “didn’t think he had to apologize” for the email.

“Somebody obviously did a lot of arm-twisting and spin-doctoring to get his name on this bogus apology,” Judt wrote Sunday. “He starts by praising the work done by Osborne House, but he can’t help injecting race into his comment by specifically referring to “aboriginal women who are suffering from the generational effects of discrimination and exploitation.”

“He says he ‘didn’t mean to offend anyone with the words’ he used. Robinson fails to say he never intended that anyone but his friends would read those words.”

Judt, who has filed a complaint with the Manitoba Human Rights Commission, says this goes beyond racial insensitivity for her and Osborne House, believing there’s an element of sexism at play within the Selinger government that underlines the issue. She wondered where the premier was Friday, and why the issue didn’t at least earn a similar response to the Dave Gaudreau incident.

Earlier this month, Gaudreau, the MLA for St. Norbert, made remarks toward Progressive Conservative MLA Ron Schuler that were deemed to be homophobic. Selinger stripped Gaudreau of his caucus duties the next day.

Selinger has yet to respond to the Robinson affair.

“When the deputy premier, who holds a much more important position in government than Mr. Gaudreau, was revealed to hold racist opinions which he openly discusses with government staffers, Greg Selinger is nowhere to be seen. What a double standard,” Judt wrote.

“When a man, Mr. Gaudreau, insulted another man, the premier himself jumped in to say this was not appropriate in the legislature or out. The conduct of Premier Selinger has sent a terrible message to all the women in Manitoba. When there are women being attacked, Mr. Selinger runs and hides from the press.”

This was not the first time Judt has made a FIPPA request involving Osborne House. Judt said government staffers have told her she was making too many requests, and her doing so made her and her funders look paranoid.

“After uncovering the content of the email that demonstrated Robinson’s racist attitude, and watching him try to cover it up, you can understand we wanted to know what else was being said in government about Osborne House,” Judt said.

Osborne House, which sees approximately 9,200 women annually, receives about $1.6 million per year from the province.

Did Deputy Premier Eric Robinson’s apology to Osborne House for his ‘do-good white people’ remark go far enough or is it time for Premier Greg Selinger to weigh in?

Premier stands by Robinson in flap over 'white do-gooder' remarks 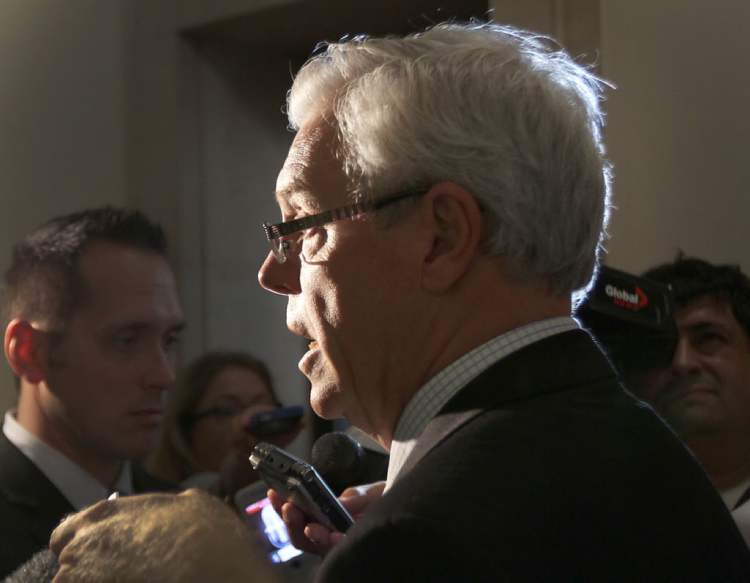 Dated Nov. 22, 2012, deputy premier Eric Robinson replies to an email of concern from an NDP staffer regarding a burlesque fundraiser in support of Osborne House, questioning the leadership judgment of CEO Barbara Judt. The last two lines of Robinson’s email, which was obtained in a package of correspondence through a Freedom of Information and Protection of Privacy Act request (filed by Judt in December) are blacked out, but can be seen when held up to the light. They read: “On the surface it is not a very good idea and moreover further exploits an already vulnerable group in society. It also further demonstrates the ignorance of do-good white people without giving it a second thought.”

“The work Osborne House does is important for our community, especially aboriginal women who are suffering from the generational effects of discrimination and exploitation. I did not mean to offend anyone with the words I used. I still feel the event was in poor taste and could have been better thought out, given the clientele of Osborne House are women who have been exploited and victimized. Upon further reflection and discussion with the premier, the words I chose in the moment were regrettable, and for that I apologize.” — a statement issued on behalf of Robinson Friday, a day after he told television network APTN that he didn’t regret his words and that he didn’t think he had to apologize.

Not only has Judt rejected the apology from Robinson, she has also filed a complaint with the Manitoba Human Rights Commission, calling the deputy premier’s remark a “racist attack.” Manitoba Premier Greg Selinger, who has obviously spoken to Robinson about the email, has yet to weigh in publicly on the matter.