Canada's destruction of indigenous culture was systematic and deliberate -- but was it genocidal?

When Charlene Bearhead decided to test out a radical word on a car mechanic from Calgary, she was braced for a backlash.

When Charlene Bearhead decided to test out a radical word on a car mechanic from Calgary, she was braced for a backlash.

It happened during a flight from Calgary to Toronto, when she started chatting with a guy who worked for Speedy Auto Glass. He asked what she did for a living, and Bearhead told him she travels across Canada teaching teachers about the legacy of Indian residential schools. Then, she dropped the G-word, explaining how the government’s agenda to assimilate indigenous children amounted to a genocide.

That’s a dynamite-laced word in Canada, a word at odds with the country’s notion of itself as a peaceful and diverse place, a word usually met with scorn.

“Instead, he says ‘So, in this genocide, what about this and this?'” recalled Bearhead. “He didn’t see it as an attack on him, but an educational discussion about what actually happened.”

That unlikely conversation gives Bearhead hope Canadians are ready for a fulsome national conversation about whether the treatment of indigenous peoples — the forced relocations, the man-made famines, the loss of land, the outlawing of religious practices and especially the removal of children over the last century — meets the genocide test.

It’s a conversation well underway among historians, political scientists and sociologists as well as First Nations activists, 350 of whom will join Bearhead next week at the University of Manitoba for an international conference devoted to the issue.

The annual gathering of the International Association of Genocide Scholars weaves together two academic trends that have so far barely trickled out to average Canadians — new and troubling research delving into the details of historic Indian policies, and debate over a broader definition of genocide that includes not just mass murder but also the deliberate destruction of one group’s culture.

Conference organizer and U of M sociologist Andrew Woolford says there is not yet a unified academic view that Canada’s colonial treatment of First Nations was genocidal, but that a consensus appears to be congealing.

That’s partly because scholars are taking a deeper look at the writings of Raphael Lemkin, a Polish Jew who fled the Holocaust and later coined the term “genocide”. He argued genocide didn’t only have to involve mass killings, but the deliberate destruction of a group’s essential foundations of life — the social and political institutions of culture, language, religion and economic pursuits that form a group’s identity and give them security and dignity.

The idea of cultural genocide is particularly important for Canadian First Nations because few mass killings or instances of direct physical destruction occurred in Canadian history. But, there are many cases of policies whose indirect intent was to destroy culture at the very least, and First Nations would argue the upshot was the same — the end of them as a people.

Tacking on the word “culture” somehow signals something was less than real genocide. Instead, scholars are arguing that destroying a group’s culture amounts to genocide plain and simple, with no need for a qualifier that softens the blow.

Scholars like Woolford go even further. If genocide should be understood as the “destruction of group life rather than lives within a group,” then in the case of Canada’s indigenous peoples, that means understanding what makes them a group, what defines their cultural cohesion, such as a profound attachment to the land and nature. So, in Canada’s colonial past, systematically depriving First Nations of access to their to land so European pioneers could settle and railways could be built, is genocidal.

All this is probably years beyond the Canadian public, many of whom are legitimately wedded on the notion that a genocide must involve mass killing.

But, even taking the most conservative definition of genocide, the United Nations convention that covers mostly just mass killing, academics and especially First Nations leaders are also making the case the Indian residential schools meet the test. The UN includes the forcible transfer of children as a key element of genocide, and that is clearly what occurred during the last century as 150,000 children were removed, often violently, from their families and sent to live in Christian schools. There, they were usually served substandard food, suffered remarkably high rates of disease and death, often endured physical and sexual abuse and taught they were inferior.

The University of Guelph’s David MacDonald, a key speaker at next week’s conference, says that’s a pragmatic place to start in a country not quite ready to take the next big intellectual leap that involves redefining genocide to include cultural destruction.

“I used the (UN genocide convention) as my standard because it is the internationally recognized ground floor for genocide claims,” said MacDonald via email from a research trip to New Zealand. “For an argument to stick in the minds of Canadians, I have avoided trying to reinvent the wheel right now. Once the UNGC genocide has been proven, which I think can be done, coming up with new definitions of genocide that better apply to aboriginal peoples will be a good idea, but to have some sort of national discussion we need a solid legal basis on which to proceed, and in my view that is the UNGC.”

But, it’s also not just about what happened, but how we remember it.

Scholars of traumatic global events, such as the long sectarian violence in Northern Ireland, say the losers suffer “a twofold curse.” First, they are the victims of violence, dislocation and trauma, and then the winners write the history and sanitize what happened.

That’s where the new research comes in, much of it bolstering the case for a Canadian genocide.

Over the last couple of years, some remarkable new findings about Canada’s colonial past have made headlines, challenging the way most people understand Canadian history and suggesting there remains a lot researchers don’t yet know.

Most explosive were the revelations last year that the federal government conducted nutrition experiments on malnourished First Nations children and adults, giving some vitamins, enriched flour and milk rations while denying others. Those experiments, which took place in the 1940s on northern reserves and in residential schools, including some in Manitoba, also saw students denied proper dental care. When historian Ian Mosby’s research made headlines, the federal government called the revelations “abhorrent.”

And, as the University of Regina’s James Daschuck recently chronicled, Sir John A. Macdonald deliberately used famine to clear southern Saskatchewan of indigenous people who were standing in the way of European settlement and the coming of the railway. Years of malnutrition following the end of the buffalo hunt and the denial of government food aid promised by treaties coincided with an epidemic of diseases such as TB that gave the government the upper hand and killed thousands of First Nations people.

More recently, millions of archival documents related to Indian residential schools were released by the federal government following a court case launched by the Truth and Reconciliation Commission. Already, TRC researchers have discovered at least 4,000 children died while in residential schools and have documented a government education policy deliberately designed to eradicate First Nations language, religious faith, cultural traditions and ties to the land. What other historic revelations lie in those piles of new documents remain to be seen.

So far, most academics acknowledge Canadians have been roundly dismissive of the notion that Canada was forged from a genocide perpetrated on its original peoples. One B.C. researcher said the term is often met with “rejection, anger and attempts to silence, shun or discredit.”

But, it’s also a word aboriginal peoples say describes neatly not just what happened over the last century, but what’s continuing today.

That includes the dramatically high rates of poverty-related diseases such as TB on reserve, the recent and startling revelation that there are 1,200 missing or murdered aboriginal women in Canada, the treaty claims left outstanding for generations, the huge rates of child apprehensions and youth suicide rates that are five to seven times higher than among non-aboriginal youth.

It’s a term some First Nations leaders, including Manitoba Grand Chief Derek Nepinak and former national grand chief Phil Fontaine, use with force. It was an undercurrent of the Idle No More movement, and Court of Queen’s Bench Justice Murray Sinclair, head of the Truth and Reconciliation Commission, believes residential schools amounted to a genocidal policy, though the commission itself has so far officially shied away from making such a declaration.

Last summer, the Canadian Museum for Human Rights raised the ire of aboriginal peoples when it decided to follow government policy and avoid naming Canada’s treatment of indigenous peoples a genocide.

Most researchers said that was unfortunate, a missed opportunity to reflect modern thinking, spark a debate and lead public opinion.

If Canadian institutions are reluctant to use the G-word, Charlene Bearhead says average Canadians are more open. As she lectures to students, teachers, academics and others, she said most people are still learning about the most troubling bits of indigenous history that have been shrouded for years. More information invariably leads to a willingness to consider the word.

If nothing else, the next generation, armed with a fuller historic picture, will lead the change.

“It’s probably faster and more effective to start with the next generation than fighting entrenched approaches based on denial.” 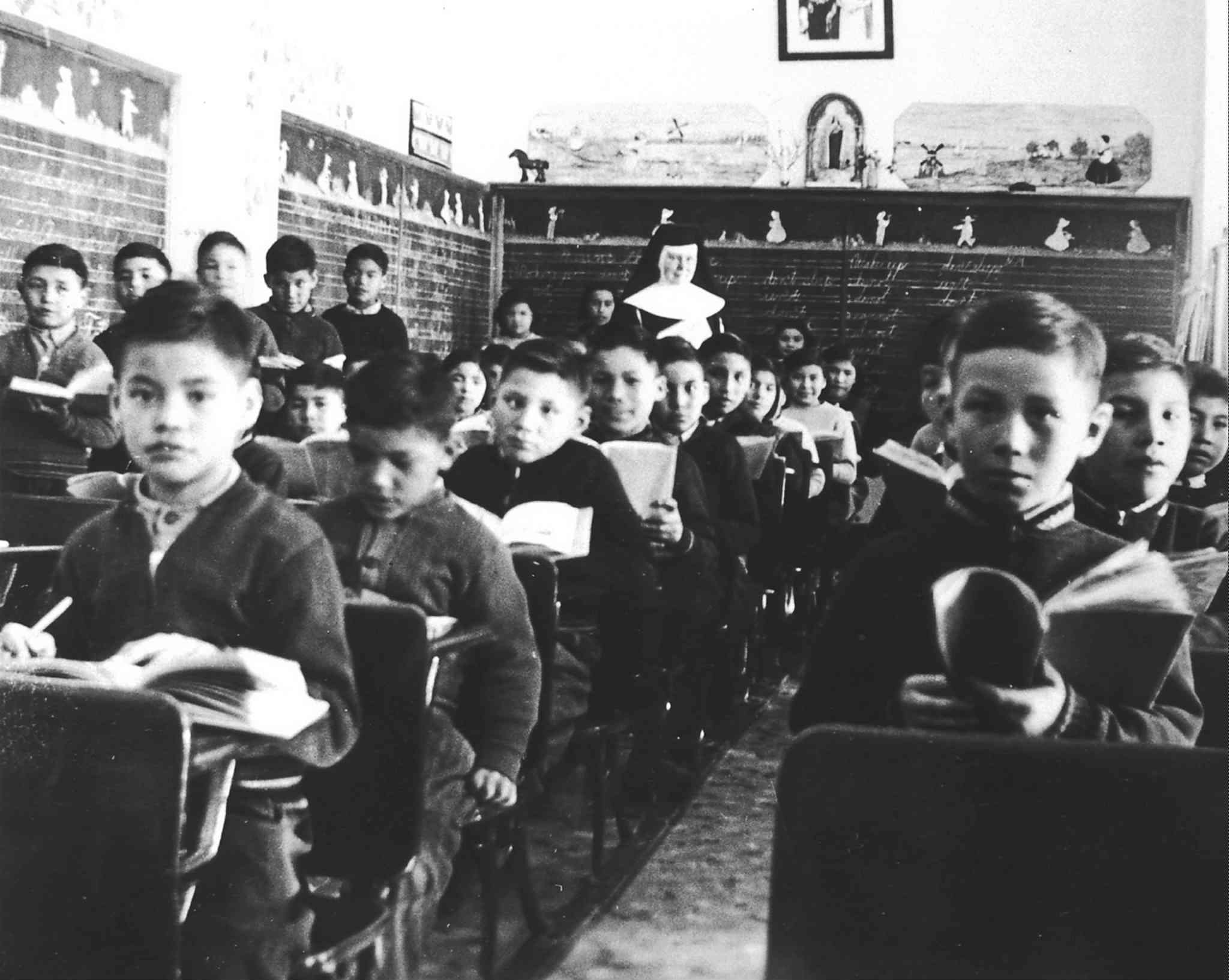 Passed in 1948, it is widely seen as a narrow definition born of compromise.

Genocide means any of the following acts committed with intent to destroy, in whole or in part, a national, ethnical, racial or religious group, as such:

(a) Killing members of the group.

(b) Causing serious bodily or mental harm to members of the group.

(c) Deliberately inflicting on the group conditions of life calculated to bring about its physical destruction in whole or in part.

(d) Imposing measures intended to prevent births within the group.

(e) Forcibly transferring children of the group to another group.

The Polish Jew, who lost dozens of family members in the Holocaust, first coined the term “genocide” during the war and later was key to the creation of the UN convention. Recently, scholars have looked back on his work, teasing out Lemkin’s more nuanced view that genocide need not involve only the mass killing of a group.

“Generally speaking, genocide does not necessarily mean the immediate destruction of a nation, except when accomplished by mass killings of all members of a nation. It is intended rather to signify a co-ordinated plan of different actions aiming at the destruction of essential foundations of the life of national groups, with the aim of annihilating the groups themselves. The objectives of such a plan would be disintegration of the political and social institutions, of culture, language, national feelings, religion, and the economic existence of national groups, and the destruction of the personal security, liberty, health, dignity and even the lives of the individuals belonging to such groups. Genocide is directed against the national group as an entity, and the actions involved are directed against individuals, not in their individual capacity, but as members of the national group.”