With body and soul

It’s 12:44 p.m. on a Thursday afternoon and, while downtown office workers are returning to their desks after lunches and errands, professionals of a different stripe are hard at work in a studio on Graham Avenue.

It’s 12:44 p.m. on a Thursday afternoon and, while downtown office workers are returning to their desks after lunches and errands, professionals of a different stripe are hard at work in a studio on Graham Avenue.

From Beijing to Winnipeg 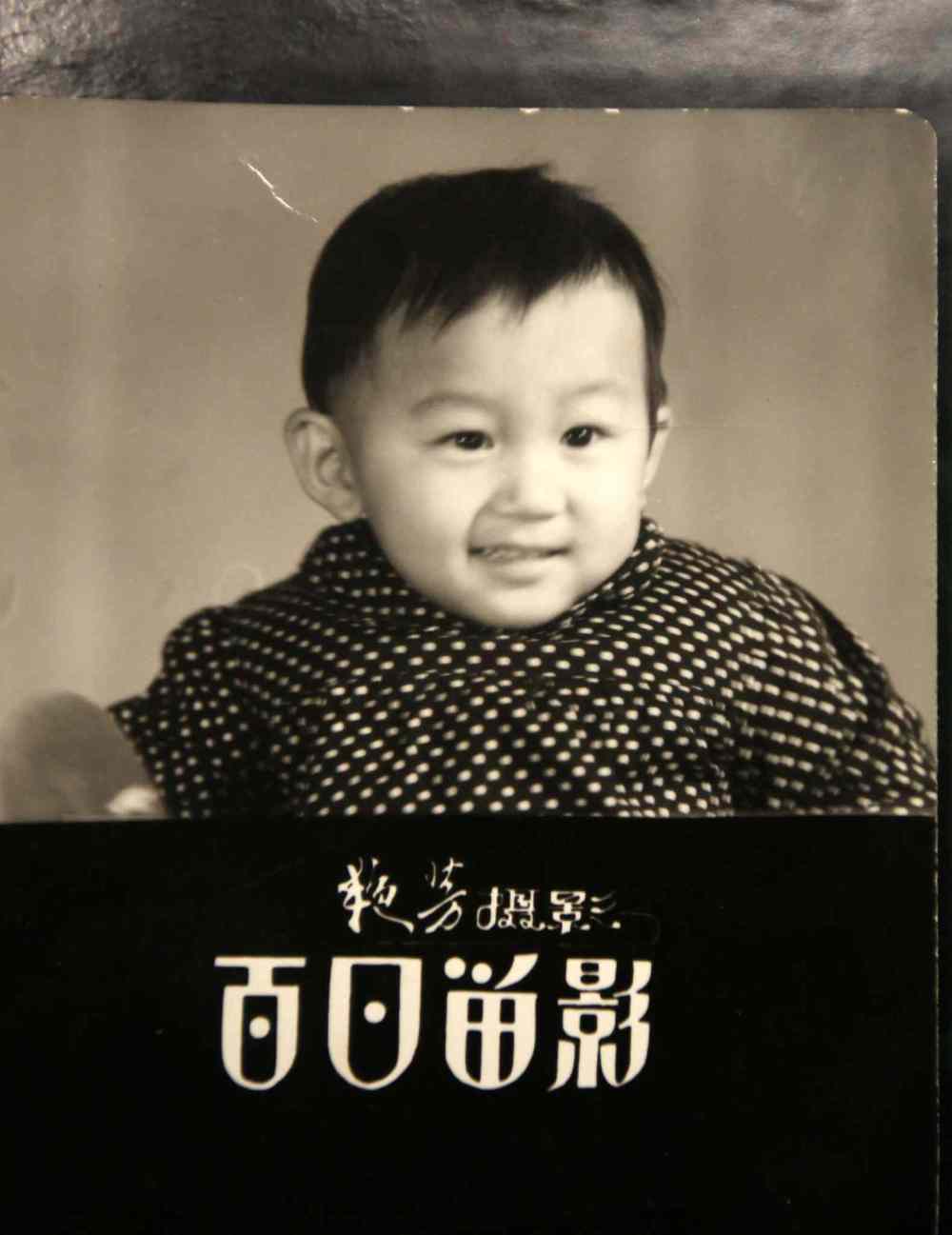 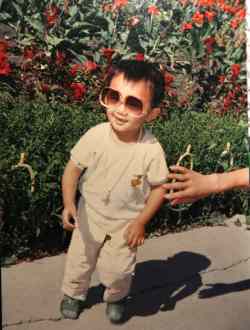 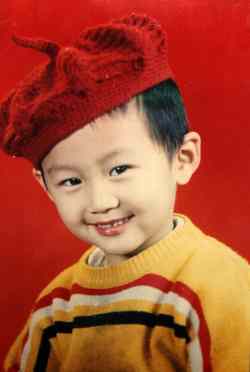 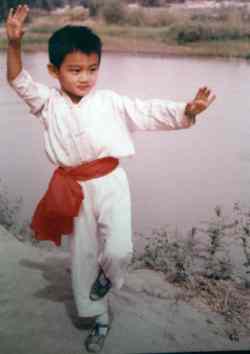 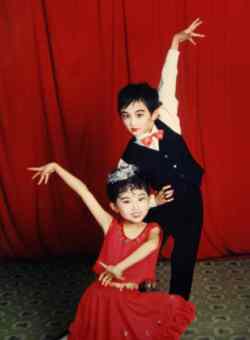 Born in Beijing, China, Liang Xing trained in classical ballet and contemporary for seven years at the Beijing Dance Academy.

The company dancers of the Royal Winnipeg Ballet are gearing up for the early March run of Swan Lake, the centrepiece of the 2014/15 season.

Opening night is less than a week away, and the mood in the rehearsal is one of quiet focus.

Corps de ballet and second soloists, clad in an off-duty mix of tutus and Lululemons, stretch their taped toes and long limbs around the perimeter as soloist Sophia Lee, who is dancing the role of Odette/Odile, and principal dancer Liang Xing, who is her Prince Siegfried, work their magic in the centre of the room.

Xing and Lee are magnetic dancers on their own; together, they are sublime, as anyone who saw October’s season opener Going Home Star can attest.

To see these dancers in a rehearsal setting, their backs and brows glistening with a thin layer of sweat, is to be reminded that they’re not just artists, but elite athletes.

One’s eyes tend to stay on Xing. The long, lithe 26-year-old dancer from Beijing has made people sit up and take notice.

After spending one season with the RWB as a guest artist at the behest of senior ballet master Johnny W. Chang, he was invited to join the company as a principal dancer in 2014.

For André Lewis, RWB’s artistic director, Xing had all the qualities he looks for in a new hire.

“He’s got this incredible body. At a professional level, he’s got it all — he’s got good feet, good legs, good stature. He’s good looking. He’s got good technique. He’s still fairly young, but he’s very expressive. He’s done it for a long time. Every time I look at a dancer I look at the entire package. Especially when they come from the outside and not up through the company.”

Xing comes to the RWB from the National Ballet of China, which he had been with since 2007. Before that, he studied at the Beijing Dance Academy for seven years.

“He was a principal dancer with the largest company in the country,” Lewis says. “That’s something significant.

“When I met his artistic director, I thought she was going to waste me and beat the flip out of me for taking him away. But she just said, ‘You know, I understand. He just wants a better life.’” 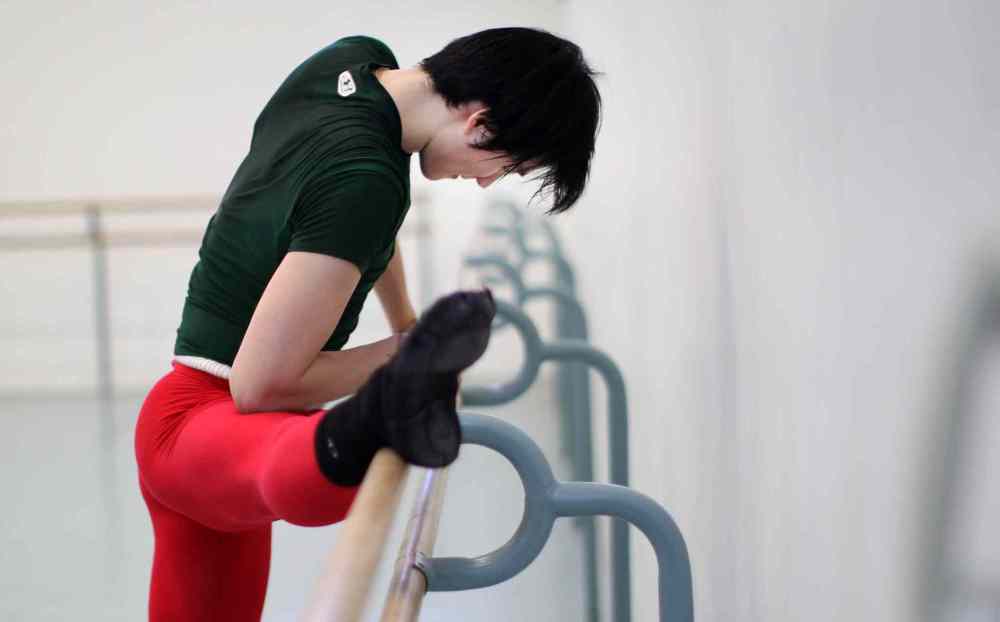 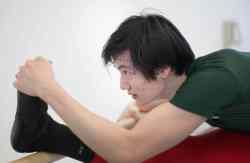 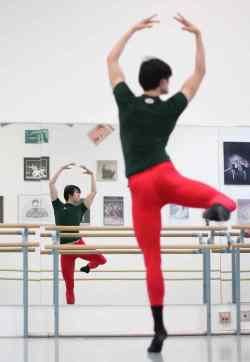 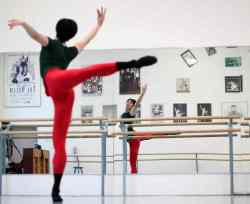 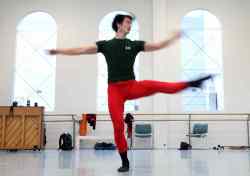 It’s just after 6 p.m., and Xing is at home with his wife Ke Hu, who is pregnant with their second child, his mother-in-law, Yanxia Zhao, who is in town from China to help with the new baby, and his two-year-old daughter, Vivian.

Today is Chinese New Year, and his warm, tidy home in the south end of the city is filled with the mouth-watering scent of dumplings cooking on the stove.

Xing, dressed in a bright yellow sweatshirt and sweatpants, is nursing a non dance-related injury; a sprained left ankle as the result of a fall outside. After dinner, he ices his ankle before dancing with Vivian — first to Gangnam Style, a household favourite, then a little pas de deux to Chopin.

The love for his daughter is obvious in his face, and he’s filled with new-dad jitters anew. “It’s hard,” he says of gearing up for both a big show and a new baby. “It makes me nervous. I keep my phone all the time beside me.”

He’s anxious that the baby will come during one of the performances of Swan Lake. She’s due any day now.

(His anxiety about the new baby coming during a performance of Swan Lake was for naught; Vincent Xing arrived at 4:30 a.m. on March 4, well before the curtain rose on opening night.)

Vivian, meanwhile, loves watching her dad dance, even sitting through all of Romeo + Juliet, which can be tough for some adults, Xing cheekily notes. She mimics his stretches, using the banister as a makeshift barre. Another future dance star, perhaps? 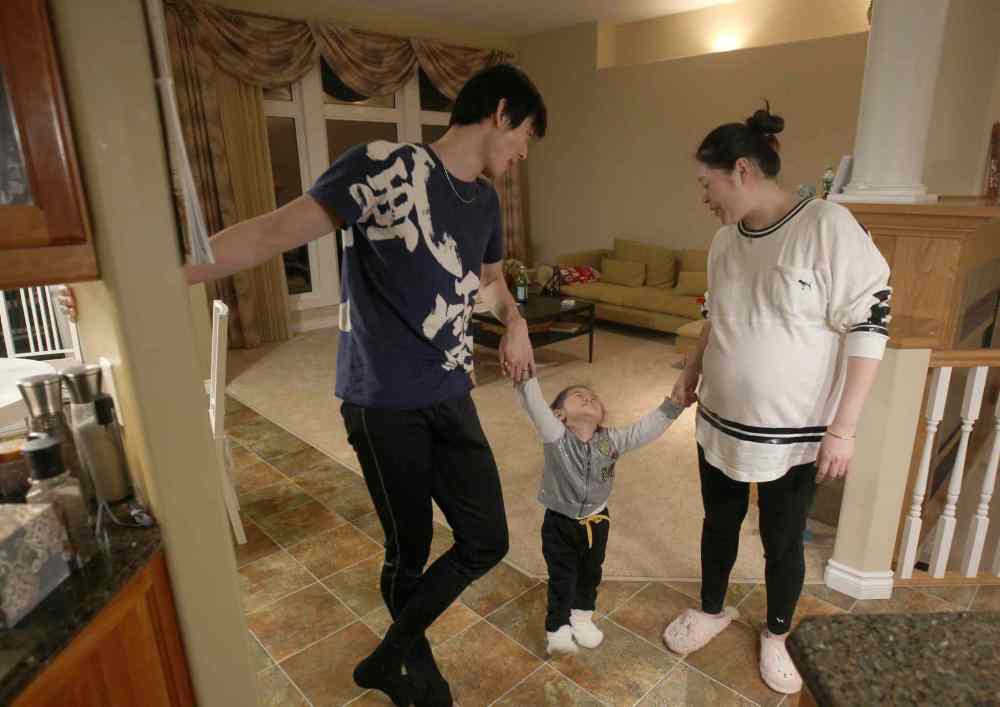 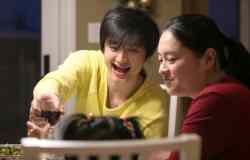 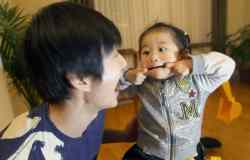 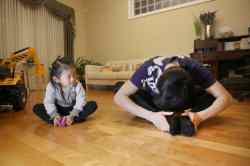 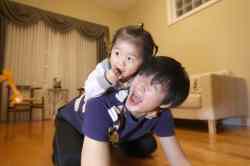 The ice isn’t helping his ankle much, so Xing turns to Chinese medicine, performing acupuncture on himself in his family room to alleviate some of the tightness in his calf. (Vivian is not a fan of the needles and keeps her distance.)

“This company is good, Winnipeg is good. The cold is not good, but it’s fine. The people are warm.”

He learned the practice from his father growing up in China. Xing found great relief through acupuncture during his days at the National Ballet. “It was amazing; the pain was gone,” he says.

Those legs work hard. When the company is ramping up for a big show, Xing dances from 9:30 a.m. to 6 p.m., with one break. “The last hour, the feeling is like drunk,” he says with a laugh.

Xing knows his body is his instrument, and he prioritizes taking care of it. Evenings are usually spent with his family and then it’s early to bed; he says he needs nine to 10 hours of sleep per night to allow his muscles to fully recover and repair.

While that doesn’t leave much time for socializing, Xing has adjusted easily to his new life in Winnipeg. After his first season as a guest artist, the decision to stay on with the company was easy.

“This company is good, Winnipeg is good. The cold is not good, but it’s fine,” he laughs. “The people are warm.” 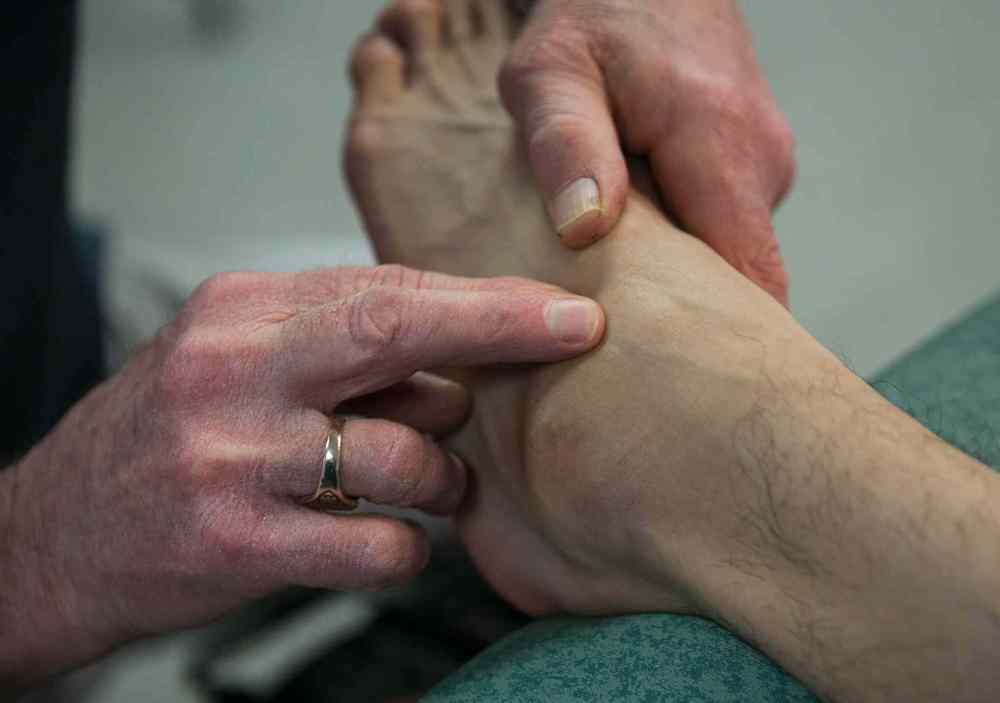 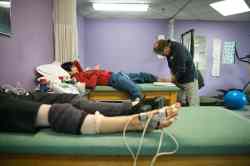 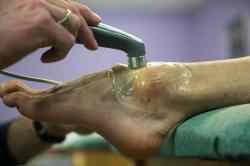 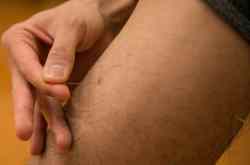 In rehearsal, Xing doesn’t relax. When he’s not performing for the ballet masters, he’s pacing the length of room, his mind at work. He doesn’t settle for ‘good.’ He aspires to great.

So it’s telling that his favourite part of rehearsal is ‘Notes,’ when dancers receive feedback and criticism about their performances in rehearsal.

“I enjoy that,” he says. “I know it’s good for me. It makes me stronger. It makes me better. I enjoy a really good rehearsal.”

Indeed, Xing doesn’t bring his ego to rehearsal, something Lewis has taken notice of. “Not only is he exceedingly talented, he’s very open. He’s like a sponge. He never complains. He works with everyone equally. If I ask him to do a different part that’s not the lead part, it’s ‘Yeah, absolutely, no problem.’”

Of course, he is working hard onstage. The grace and beauty the audience sees often belies the physical power and stamina required to be a ballet dancer.

“You have to jump high, you have to lift the girl in the air. But we have to make it look nice, like it’s so easy. Like it’s nothing,” Xing says.

That’s also true of pushing through an injury; the audience doesn’t see the pain of stressed muscles, tendons, ligaments and joints.

Dancers train like athletes — “You have to build the muscle, good quality muscle. You have to be strong,” he says — but it’s the artistry that sets it apart.

“For us, there is not a standard. Like, ‘OK you jump the highest, you got the first prize.’ You have to use the body to transfer the energy of the story to the audience. That’s the difference.”

Xing knows that even if a dancer has perfect technique — something all ballet dancers constantly strive for — the performances will ring hollow if he or she doesn’t bring musicality and character to them. To that end, Xing is naturally gifted; he’s one of the most expressive artists in the company.

Lewis is thankful that Xing has made Winnipeg the place he wants to practice his art form.

“He blew me away in Going Home Star, he did beautiful work in Romeo + Juliet and Swan Lake has been very strong,” he says. “He’s been a pleasure to work with.” 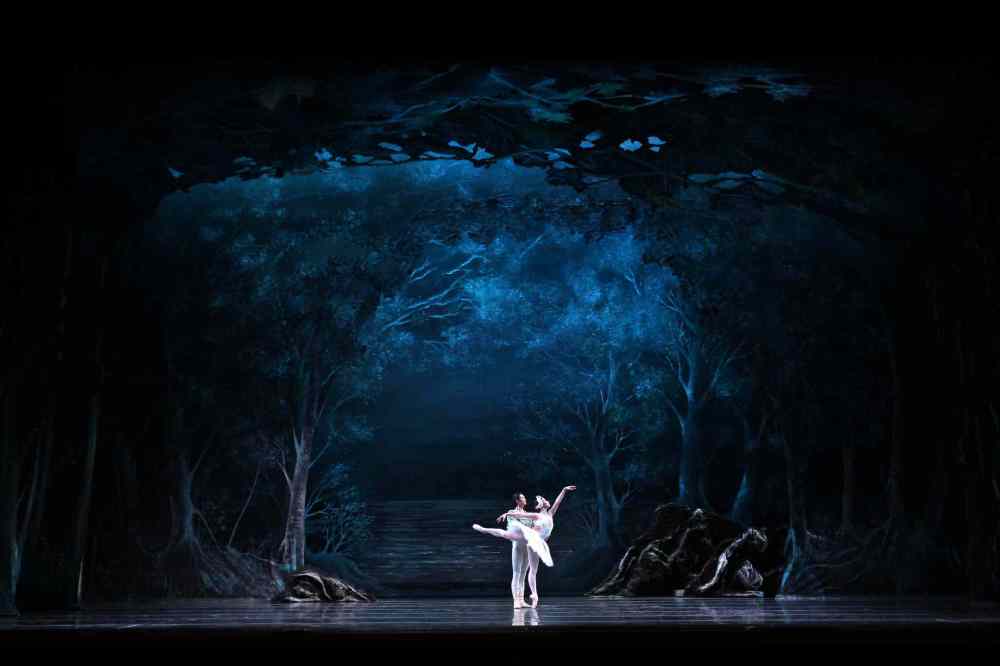 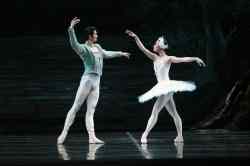 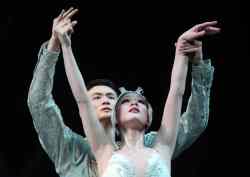 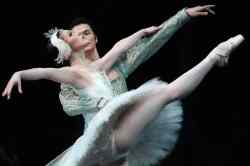 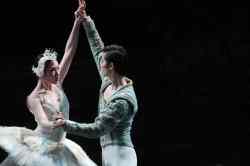