They came,they saw, they were blown away

One hundred people, maybe, that’s how many came out to the Winnipeg Indoor Soccer Complex to soak up the moment. One hundred pairs of eyes, and a dozen cameras.

One hundred people, maybe, that’s how many came out to the Winnipeg Indoor Soccer Complex to soak up the moment. One hundred pairs of eyes, and a dozen cameras.

For the 23-year-old athlete’s future, only a handful of those gazes really mattered. Those were the ones watching from turf level, milling about the field in NFL-crested jackets. One by one, count ’em up: the New England Patriots. The Pittsburgh Steelers. The Seattle Seahawks. The Green Bay Packers.

In total, 17 pro scouts gathered in Winnipeg on a sunny Monday afternoon for the first NFL Pro Day ever held in Manitoba. What they saw, and what they thought, could change Onyemata’s life forever. Their eyes could hold the key to him snagging an NFL draft spot next month, or barring that, a pro contract.

Above all, for a student from Lagos, Nigeria who had never even seen a football game until four years ago, those eyes could hold millions.

Shaking off their gaze, Onyemata set his feet for a 40-yard dash. He burst off the sideline, steel-cut thighs pushing his 6-3, 300-pound frame down the turf. As he blew past the midway mark, University of Manitoba Bisons head coach Brian Dobie called out a lone cheer. Then Onyemata slowed to a halt, and began the slow walk back to try again.

The scouts hunched over their clipboards and iPads, scribbling figures. Other than the mechanical whine of the overhead lights, the facility was silent.

They would clock that run at 5.06 seconds. It was slower than Onyemata was hoping; he’s run faster with Bisons trainers before. Later, his Los Angeles-based agent Carter Chow would shrug that off. What matters more, the agent said, is that scouts got to watch how Onyemata runs, got to see his mechanics.

He can move, after all. That’s what piqued the NFL’s interest two months ago, when Onyemata burst onto their radar with a standout performance at the East-West Shrine Game in Florida. It’s the fact that a guy with his size and squat, powerful build can move the way he does, so explosive.

Even if Onyemata’s football technique is raw, there are ways to argue that this too is a plus. He isn’t banged up. His habits have a short history.

So it appears. When Chow and Dobie started plotting to invite NFL scouts to the U of M, they hoped to see a handful of teams; they ended up attracting more than half the league. On NFL news tickers, the word “Manitoba” started running alongside the names of vaunted player factories such as Auburn and Nebraska.

This in itself is unique. At Ohio State last week, 142 scouts turned out to watch 15 different players. In Winnipeg, they all came for just the one.

When heavy fog grounded planes destined for Winnipeg Sunday night, teams raced to reschedule their scouts on early morning flights. When they landed, they clustered in the Bisons complex at Investors Group Field, chatting with coaches and with Onyemata, getting to know his soft-spoken demeanour and gentle patter.

Then the switch flipped, and they saw his power. In front of those eyes, Onyemata bench-pressed 225 pounds 33 times, and if he had been invited to the NFL Combine he would have been tied for No. 1 on the defensive line and No. 2 overall. His broad jump would have been in the top 10, his 33-inch vertical not far behind.

Around the field, the buzz from scouts was “phenomenal,” Chow said. “David certainly took care of his end of the bargain… he was incredibly explosive.”

The second half of the field work was new to Onyemata, though. It’s stuff he didn’t know. So New Orleans Saints defensive line coach Bill Johnson and his Philadelphia Eagles peer Chris Wilson had to teach him, walking him through the way scouts wanted to see him attack the training dummies.

“Let’s see how violent you can make those hips twitch,” Johnson said in his thick southern drawl. “If I was younger, I’d show you.”

By the end of the drills, Onyemata was drenched in sweat, and tiring. He’d just gone through an entire NFL Combine worth of workouts in less than three hours and the effort of it showed. But scouts wanted to see more so they put him on his knees, coaxing him to slam his arms forward as if to stop a charging opponent.

Onyemata tried it once, while Johnson shouted him on. Wilson knelt down beside him.

So he did it one more time, launching towards a pad held by a trainer, then slamming face-down in the turf. Minutes later, the scouts announced the Pro Day was closed. There was a smattering of applause from the stands above, where dozens of Onyemata’s teammates and high school athletes had watched.

It was over. The scouts cleared out quickly, but Bisons head coach Dobie lingered, retelling for Chow and everyone else who cared to listen the details of Onyemata’s incredible story. Like many others who had been there since the crack of dawn, the coach was exhausted; it had been a long and surreal day.

“It feels like we just played in the national semifinal or something,” Dobie said, laughing.

If this is Onyemata’s moment, in a way it is the Bisons coach’s, too. If the player makes the NFL, and if — as he promised Monday — his work ethic makes him great, then Dobie and his crew will get dutiful mentions in theSports Illustrated profiles and soft-lit ESPN features to follow.

In those retrospectives, Dobie will be remembered as the Canadian coach who took a chance on a quiet Nigerian student and put him on the path to the richest sports league on the planet. When asked about what that could mean for Dobie’s recruiting, the coach’s eyes sparkled. He was already planning to get on the phone with a few recruits when he got back to his office.

So if Onyemata does get plucked in the NFL draft next month, then it will gild not just his own life but all of Manitoba with the shine. At the centre of a gathering storm, the player himself knows this. For now, he’ll have to wait to find out — and just keep working. 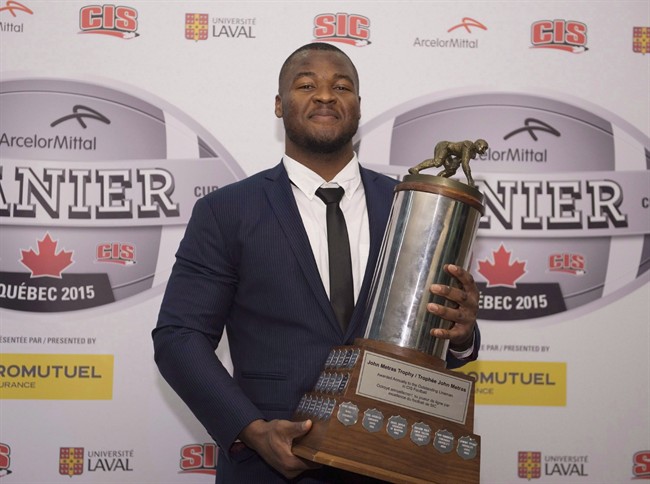 Have you Herd? NFL on way 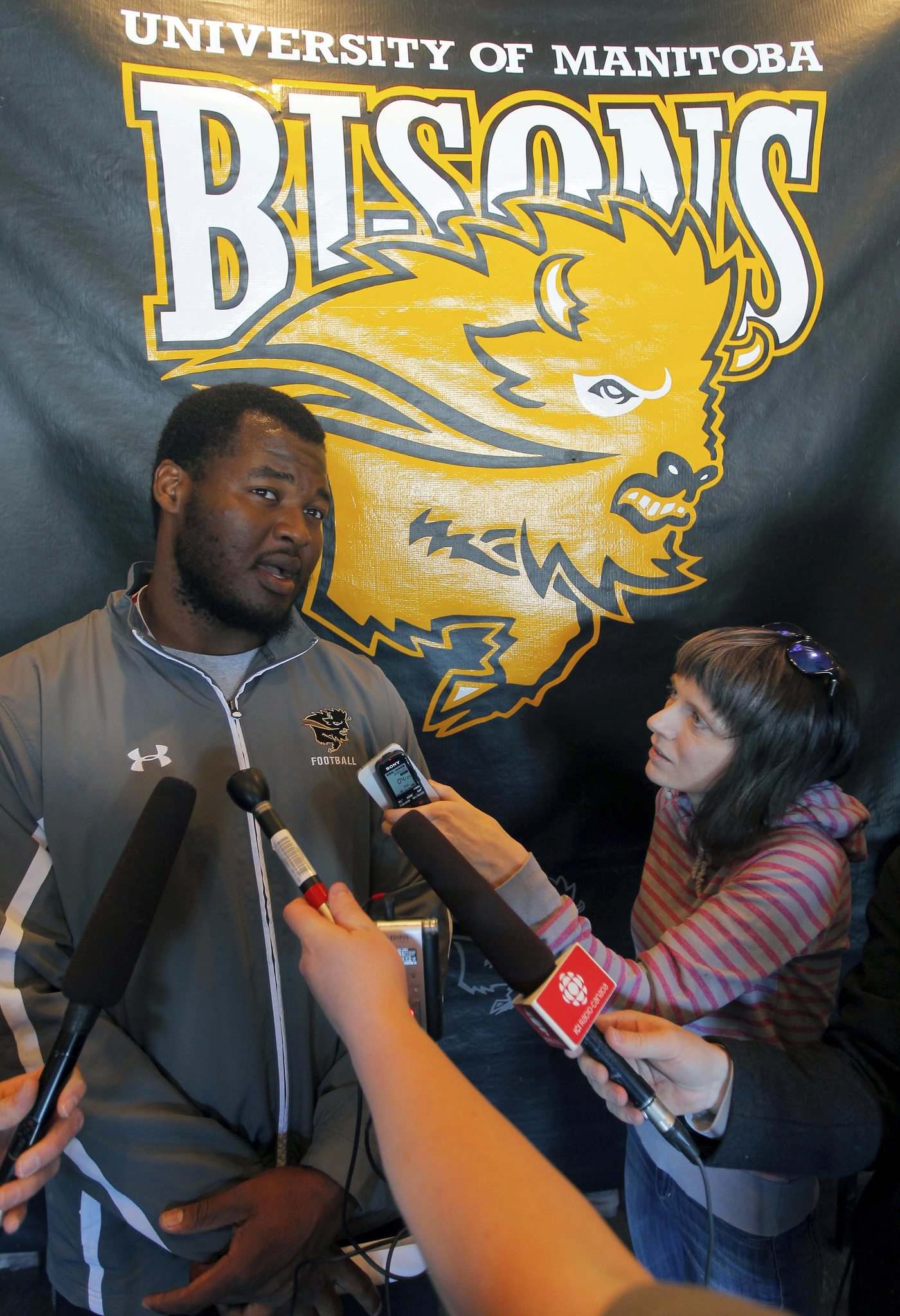 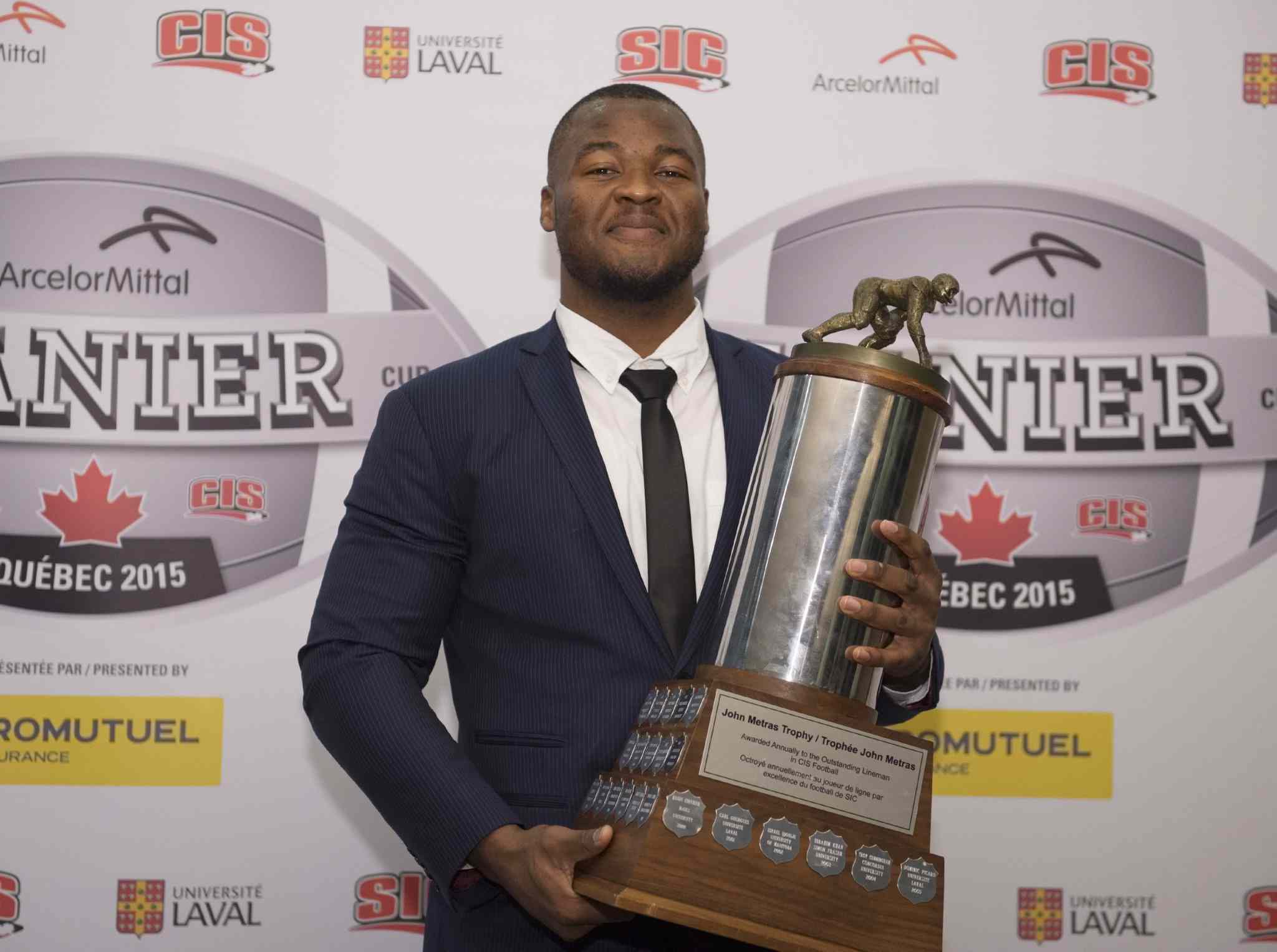 Bisons defensive lineman David Onyemata attracted more than half of the National Football League to Winnipeg Monday. Some statistics: