Elsie Bear’s Kitchen was hopping Thursday in the political heartland of Métis territory.

Elsie Bear’s Kitchen was hopping Thursday in the political heartland of Métis territory.

A giant TV screen was set up for news clips from outside the Supreme Court of Canada at the restaurant located at the headquarters for the Manitoba Métis Federation.

About 150 people, all MMF staffers, cheered on their president David Chartrand, and other Métis leaders and their sound bites that savoured the Métis’s biggest court victory ever.

“I can tell you this, I’ve worked for the Metis Federation for 18 years hosting their weekly radio show at NCI, the Métis Hour Times Two, and I can hardly wait for David Chartrand to come in Saturday and give us his report,” said an elated Ray St. Germain, reached by phone after the news broke.

The icon of Métis music Canada hadn’t attended the breakfast at Elsie Bear’s Kitchen and hadn’t needed to, either.

Word that the highest court in Canada had ruled Métis and non-status Indians are now in fact aboriginal peoples in the eyes of the court swept through indigenous circles in Winnipeg, spinning out on social media and lighting up Facebook and Twitter feeds all day.

“It’s a huge leap. We’ve been waiting to see this decision and David Chartrand’s been talking about this for years. And here it is,” St. Germain said.

The singer summed up his feeling in one word: “Wow,” he said.

Across the parking lot from the MMF at Winnipeg’s Aboriginal Centre, the head of Winnipeg’s indigenous community was busy digesting the news coverage of the ruling, face wreathed in a broad smile.

“It’s good news, justice for people who have been discriminated against for a long time in law. Finally they are going to get the recognition they deserve,” said Damon Johnston, president of the Aboriginal Council of Winnipeg.

At the North End’s Indian and Métis Friendship Centre meanwhile a group of women in their 60s and 70s were busy at their afternoon sewing circle, part of the Aboriginal Seniors Resource Centre.

“My daughter who’s a lawyer sent it to me,” said Winnipeg Ojibway elder Thelma Meade. “There was a lot that went through my mind. The Métis look at it (the ruling) as a source of new funding but I don’t know what that will do to First Nations people,” Meade said.

Meade, who lost her Indian status when she married a Métis man and later regained it, was voicing the concern on the minds of First Nations people who now wonder if they’ll have to share funds with two new groups now recognized as Indians.

Meade finds the legal distinctions disturbing and more than a little confusing for people who’ve lost or regained Indian status, spent part of their lives being considered Métis or non-status and wondering where they belong.

“It plays with your mind. To me it’s unfair to classify people as First Nation and then as Métis.It takes a while to transform yourself and your identity. The First Nations and the Métis (each) have their own cultures. Inside I was always an Indian,” Meade said.

There are more questions than answers right now, the women said.

Mary Lathlin, busy on a sewing machine stitching up a design for a star blanket quilt, boiled the decision down to the politics of identity, “Do you mean they’re trying to decide whether Métis should get treaty rights? Well if they’re half and half, sure, why not? They can have treaty rights. I’m treaty and I grew up on a First Nation Community.”

Across the sewing table, Olga Campbell, identifies as Métis but for her, the inevitable political wrangling bound to roll out now didn’t mean much. “It don’t make no difference to me,” Campbell said.

The place where Louis Riel staged the rebellion and used it to carve out the province of Manitoba is home to an estimated 90,000 indigenous people, divided into three major legal categories, Métis, First Nations and about 10,000 non-status Indians.

The court ruling means all three groups are now considered Indians under Canada’s constitution, putting Métis and non-status Indians firmly under federal jurisdiction, with the same fiduciary and negotiating responsibilities as Ottawa has to treaty Indians.

But Métis and non-status Indians in Winnipeg said Thursday they know the ruling doesn’t mean they’ll automatically get the same rights as treaty Indians.

“It opens the doors for their representatives to negotiate with government for those rights and that’ll take some time but at least the door is open now,” the Aboriginal Council’s Johntson said. “That door wasn’t open before.”

Johnston, who like Meade and thousands of others has lived life straddling the treaty, non-status and Métis worlds, was born non-status and ended up status.

“This decision doesn’t mean they (Métis and non-status Indians) will fall under the Indian Act and they’ll get treaty rights,” Johnston said.

“And it may end up being a little different for non-status than it is for Métis and the Métis nation has its own definition for who is Métis. When you look at it, those rights are all negotiable now. What this does is give people the freedom to walk through those doors and negotiate,” Johnston said.

David Budd agreed it will be years before anyone knows what kind of Indians the Métis and the non-status Indian will be.

Budd was born Métis on a reserve, the Cumberland House First Nation in Saskatchewan and regained his treaty, the way Johnston did, by applying for status registration after discriminatory sections of the Indian Act were struck down in court decisions dating back to the 1980s.

“It just means they (the Métis and non-status) are recognized now, at the Supreme Court level. Now it has to go to the political level and it’ll be all mashed around and debated. The government will have their idea of what it means. Aboriginal people will have theirs and it’s all got to be worked out,” Budd said. 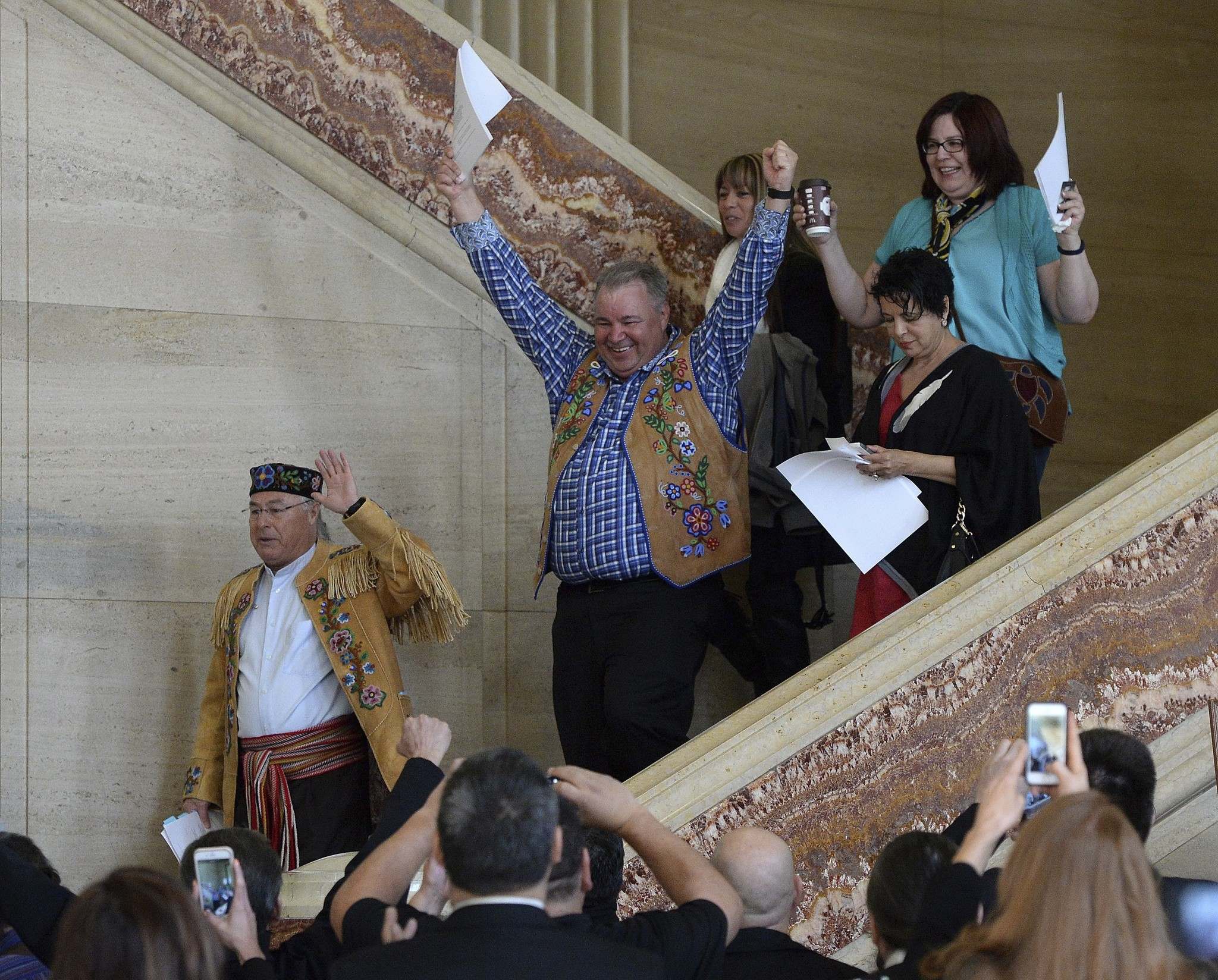