Professors, students, advocates take to the streets in March for Science rally

Scientists believe the evidence is clear: they need to get out of the lab more and start taking their message to the people.

Scientists believe the evidence is clear: they need to get out of the lab more and start taking their message to the people.

“We’re a fairly reserved lot,” said Andrew Park, associate professor of biology at the University of Winnipeg. “And we have not been all that good at public communication. I think we realize that and are getting better at it, but we have a long way to go.”

Park was already addressing the matter, literally, as one of the five speakers at the March for Science rally held on the steps of the Manitoba Legislative Building on Saturday. All of the speakers were either science researchers, students or professors.

Around 200 protesters and activists attended the rally on a blustery, cold late April afternoon. It was one of some 500 similar protests held around the world Saturday, including 18 in Canada.

The events were intentionally held in conjunction with Earth Day. The goal was to advocate for evidence-based policies, such as climate change and vaccinations, and push back against government funding cut to scientific research.

“There’s been a creeping erosion for knowledge and facts, especially from experts,” Park added, noting some of the backlash has resulted from segments of the population left behind by economic progress.

“If you don’t have access to good health care, you might ask what has science done for you lately,” said Park.

“We’re constantly faced with a challenging economic environment,” said Mark Belmonte, professor of plant biology at the University of Manitoba. “We have to have a strong voice in prioritizing and ensuring that science and science research is continually funded.”

To that end, Belmonte said scientists in all fields have to make data and research more understandable to the general public.

“I think that’s what will change the public perception,” he said. “It’s challenging stuff that we have to work with. How do you make it understandable for everyone? And we’ve got to start early.”

Michael Paterson, a senior research scientist with IISD Experimental Lakes Area, said the days when scientific research was widely accepted based on data are on the wane.

“Sadly, when you look at what is going on in the world, that’s not the case,” Paterson said. “Support for science is diminishing everywhere. If we don’t speak out, leaders forget.”

“If we don’t have evidence, we’re left with intuition, and that can be a very poor guide. When people thought the world was flat, that was intuition.”

“The ultimate goal is long-term survival,” he added, “and quality of life.”

Nathan Zahn, the director of Science First, a not-for-profit advocacy group for evidence-based policy, agreed scientists have to raise their voices, noting the facts don’t always speak for themselves anymore.

“It’s already happening,” said Zahn, who organized the rally. “That’s why we’re here today. It doesn’t have to be political. (The facts) just have to be communicated to the public.”

“It’s crazy we have to do this,” he added. “You’d think science would be more supported. There’s a cult of ignorance right now in some places, cognitive dissonance. They won’t listen to the facts even if it’s right in front of them.”

“It’s not so much about the money and the cuts, it’s about how we make decisions. Evidence-based policy. Whether it’s vaccines or climate change, the science should help us decide.”

The rallies were to support their American counterparts, who say they’re facing mounting attacks against science, which include cuts to the Environmental Agency under the new administration of U.S. President Donald Trump.

Signs in the crowd included “Defiance for Science” and “Didn’t Die of an Infection? Thank a Scientist.”

Ruby Pommer and her daughter Sage, 13, sat at the foot of the legislature steps and handed out their homemade “Periodic Table” cookies.

Pommer said the anti-scientific/anti-elite message of Trump “will affect us in the long-term.”

“Just his (Trump’s) whole public statement that climate change is a hoax perpetrated by the Chinese,” Pommer added. “I find that very irritating. I wish everybody would get out and yell about that. It’s such a crock.”

Gene Degen and Barb Degen said the issue is bigger than just Trump policies. And it’s bigger than any one country.

Worldwide rallies in the name of science 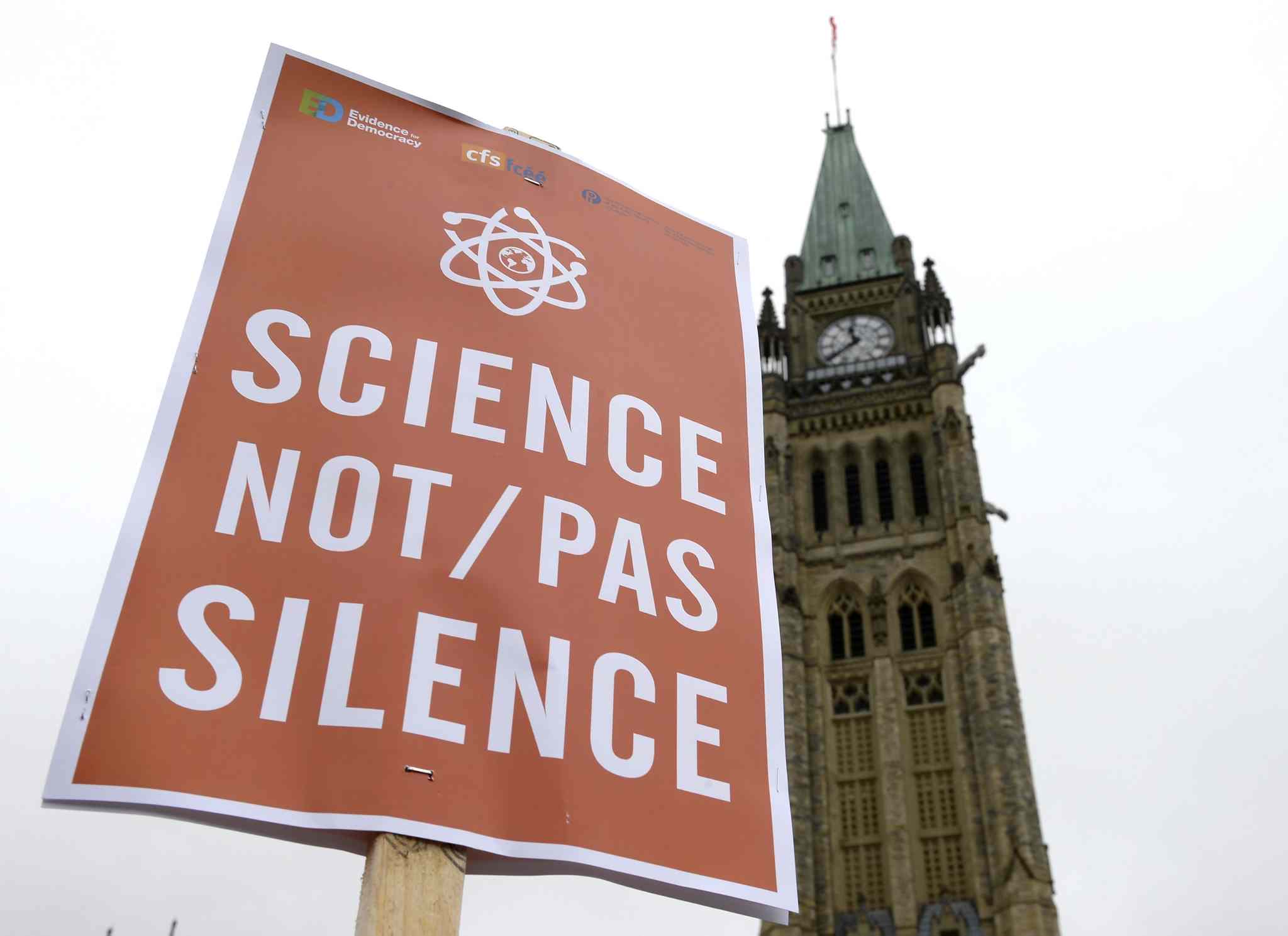