When Maxime Bernier still had a seat in the House of Commons and around the federal cabinet table, political strategist James Carville was ruminating on a voting riddle he had yet to solve.

"During my time as a political strategist, one of the most vexing problems was figuring out why so many people vote against their perceived interests," wrote Carville, who helped Bill Clinton win the U.S. presidency.

"A chief complaint of many Republicans is that Asian-Americans and Jews strongly support and vote for Democrats despite the affluent economic standing many have achieved. Similarly, Democratic strategists struggle to understand why 77 out the 100 poorest and most government-dependent counties in the United States voted for Mitt Romney in 2012."

Carville made those comments in a piece for The Hill in 2014, but that same vexing question resonates today as we look at some of the success Bernier’s anti-vaxx stance as leader of the People’s Party of Canada had at the ballot box Monday night.

Bernier didn’t win his seat. His party didn’t elect a single MP. But there was enough in that platform built upon anger over COVID restrictions and mandatory vaccinations to capture 5.1 per cent of all ballots cast. In case you are wondering, that’s more than twice the share of votes the Green Party attracted.

We have to assume the success Bernier had in those two ridings is directly tied to anger still raging in that part of the province over public health orders. And is it any wonder those two ridings filled with COVID deniers and vaccine holdouts saw so many place their hope in Bernier at the ballot box?

But in doing so, these voters were willing to shoot themselves in the foot in ways Carville never imagined.

Carville’s concerns were largely focused on voters marking their ballots against their own economic interests. Unfortunately, marking a ballot for Bernier puts you and everyone else around you at risk. If your interest is getting through the pandemic alive, then the People’s Party platform is kind of like ivermectin.

I don’t want to get all Darwinian here, but is natural selection at play when those in COVID hotspots vote for a party whose platform poses the greatest risk to public health efforts to flatten the curve?

If so, the next time we go to the polls Bernier might find some of his support has unfortunately died out. 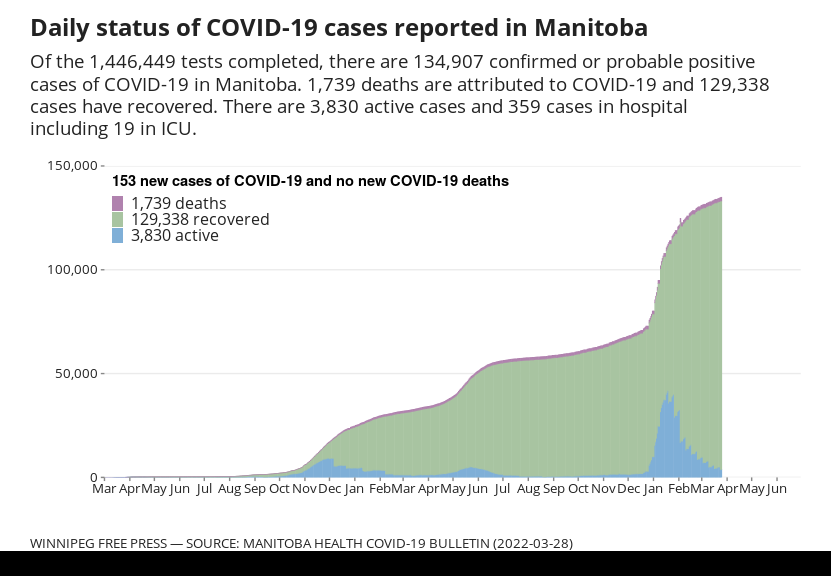 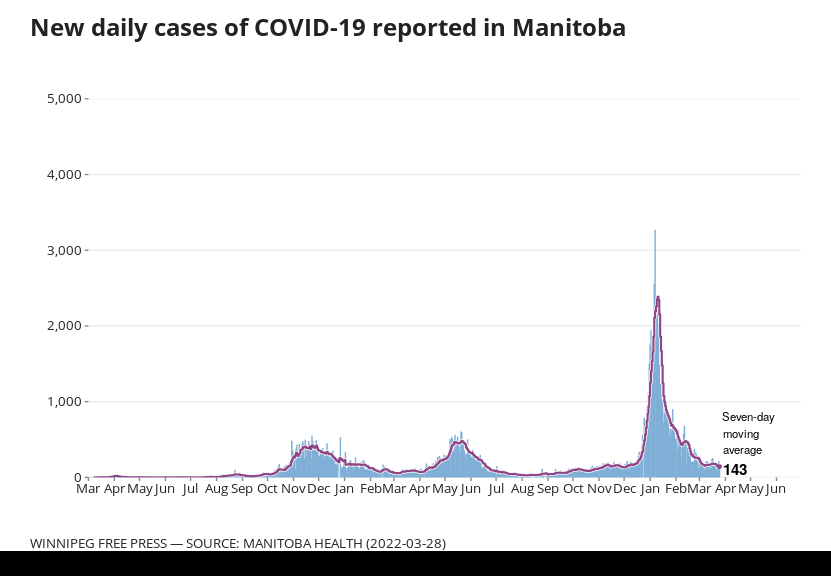 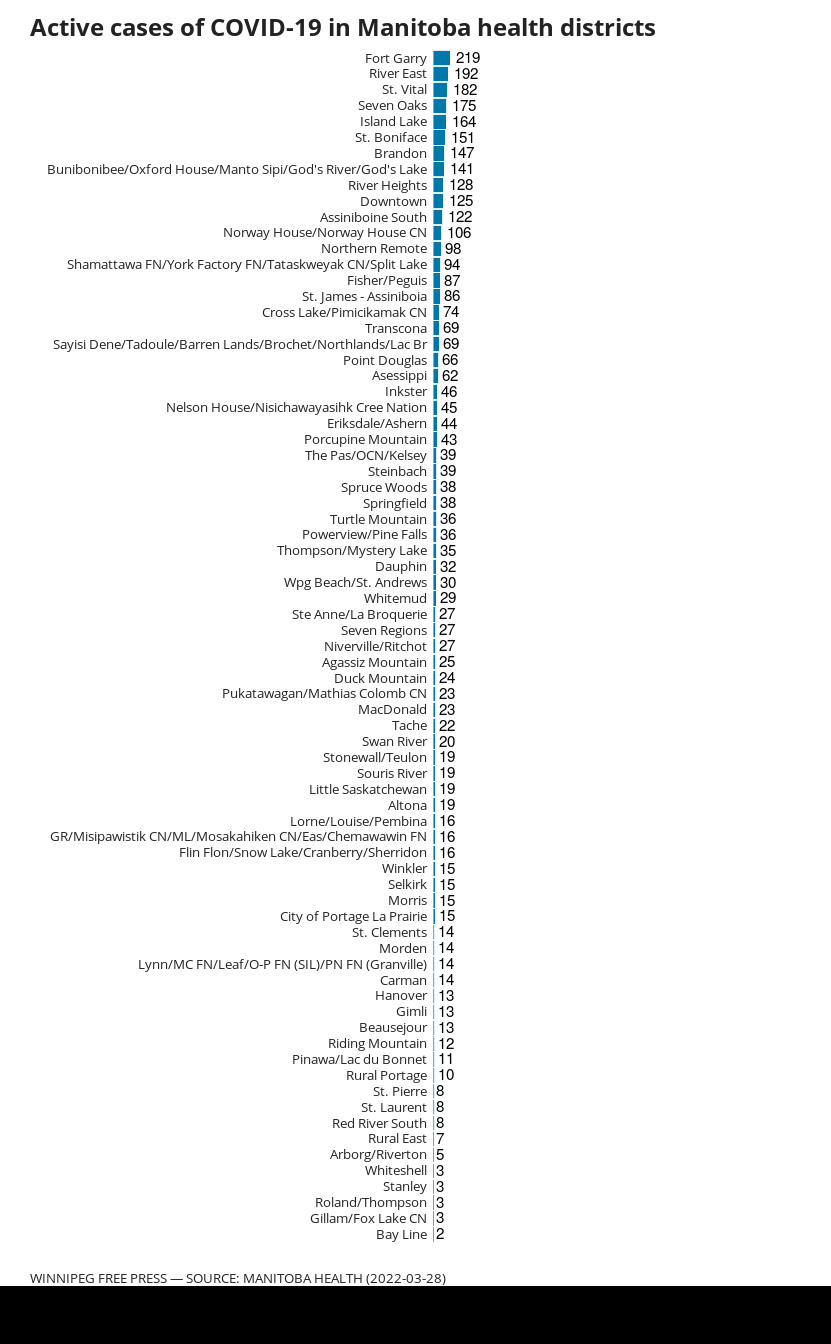 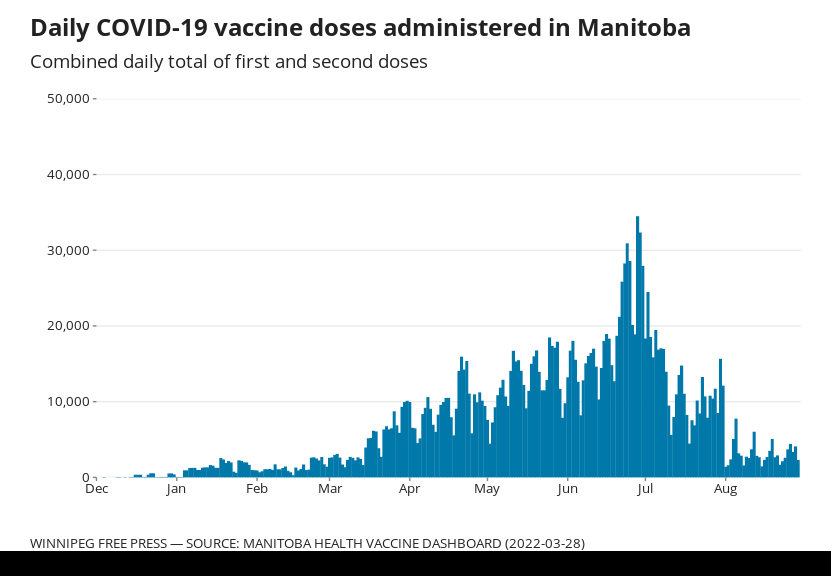 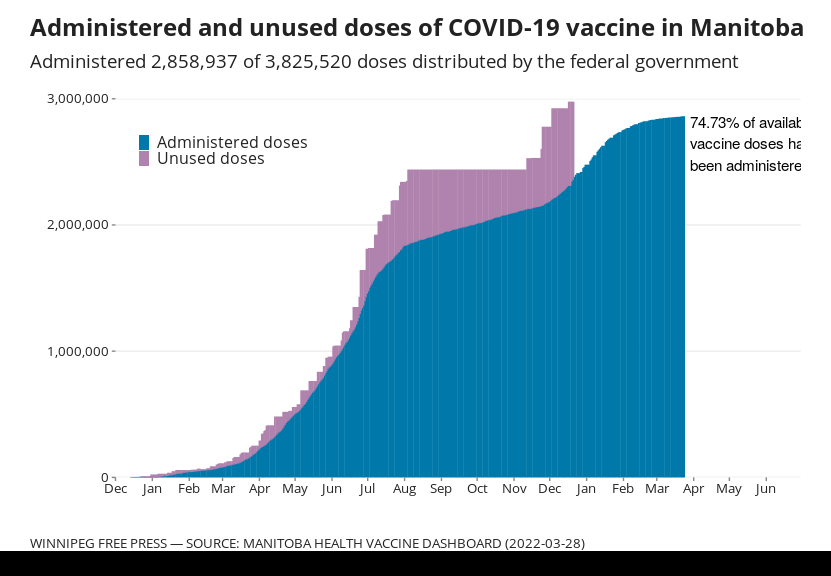 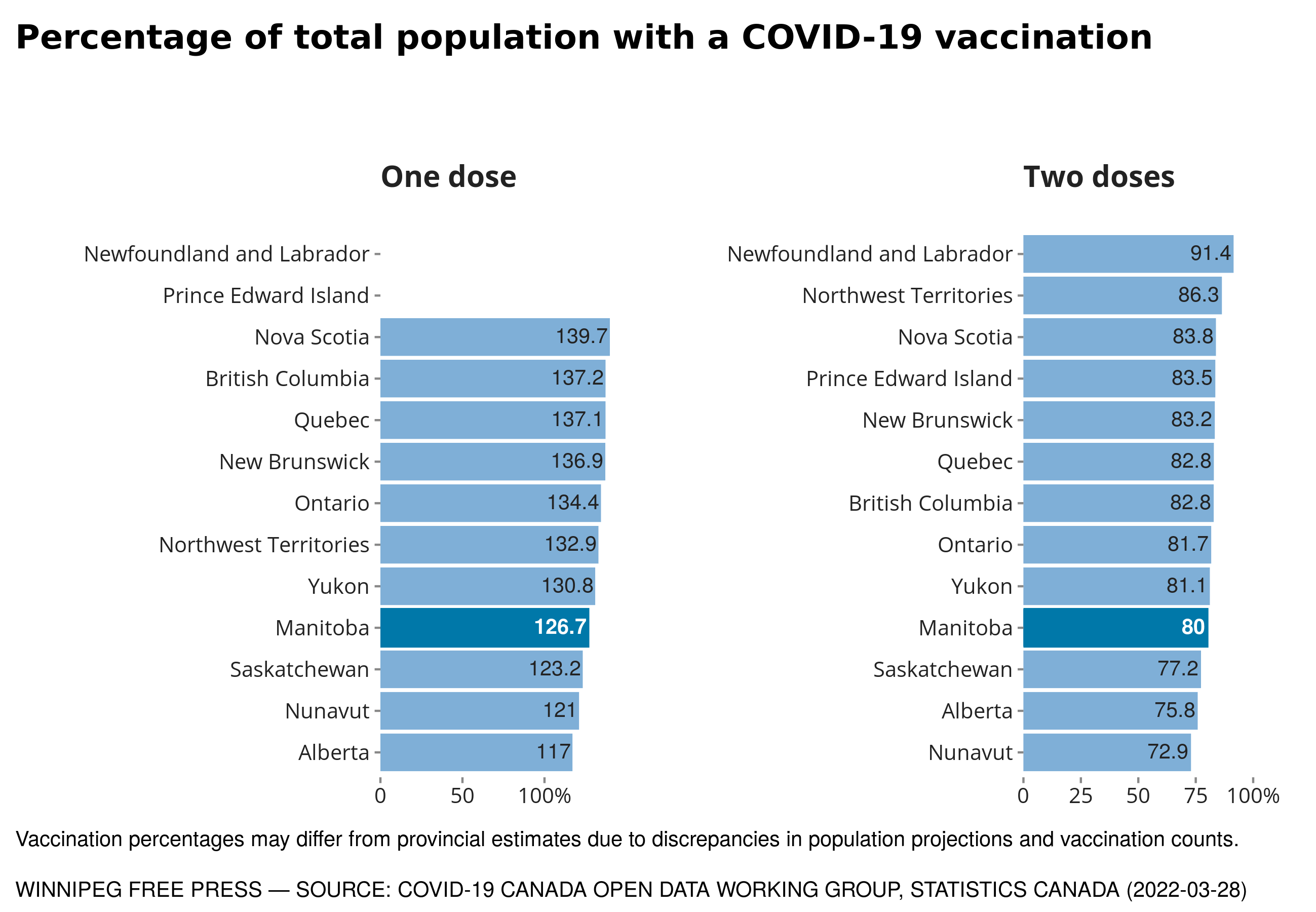 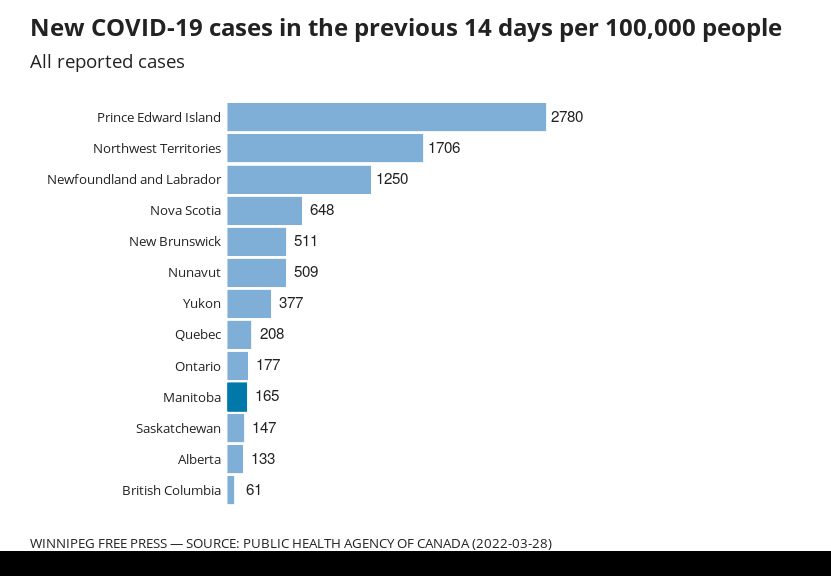 To see a larger selection of charts showing the state of COVID-19 provincially and nationally, visit COVID-19 by the numbers.

• Provincial health officials reported 66 new COVID-19 cases Tuesday and no new deaths. Of the 66, 50 are not vaccinated; 11 were fully vaccinated and five were partially vaccinated. As of Tuesday morning, 71 people were hospitalized with COVID-19 in the province, 14 of whom were in intensive care. The five-day test positivity rate was 2.3 per cent provincewide.

For the latest information on current public health orders, restrictions and other guidance, visit the provincial government's website.

All Manitobans born on or before Dec. 31, 2009 are eligible to schedule a first-dose vaccine appointment. Anyone who has received a first dose of any vaccine can now book their second-dose appointment. There must be a minimum of 28 days between receiving the first and second shots. For the latest information on vaccination, visit the provincial government's website.

Manitobans who have received all required doses of a vaccine at least 14 days ago can request an immunization card to prove complete vaccination. To request a digital or physical card, visit the provincial government's website.

• Nunavut reported two new cases of COVID-19 two days after reinstating its mask mandate. One of the cases is in Kinngait on Baffin Island; the other Kugluktuk in the territory's far west. Dr. Michael Patterson, chief medical health officer for the territory, said the new cases will not change public health orders. The new cases brings Nunavut's number of active infections to five. Three of those are in Kinngait, which has a population of about 1,500.

• Alberta Premier Jason Kenney's government is fighting to contain a rapidly expanding surge of COVID-19 cases. Kenney's government has sought federal emergency help with COVID-19 hospitalizations, which are becoming so numerous doctors may have to begin rationing life-saving resources. Ric McIver, Alberta's municipal affairs minister, asked for help with air transporting taking patients out of province for care, and for more intensive care nurses and respiratory therapists. Alberta has more than 20,000 active cases. On Monday, there were 954 COVID-19 patients in hospital and 216 of them were in intensive care, well over normal ICU capacity.

• A doctor fired from a Texas hospital after being accused of stealing COVID-19 vaccines sued the county Tuesday, accusing the hospital of discriminating against South Asians and spreading disinformation about him. Dr. Hasan Gokal says his supervisor in the Harris County Public Health department and a department human resources representative accused him of stealing and administering COVID-19 vaccine to too many people of South Asian origin or descent the first night of the rollout of Moderna's vaccine. Late that first night, all present had been vaccinated and 10 doses remained; Gokal says he began calling people he knew, including his wife, who were eligible. "There wasn’t one single person who was turned down (for vaccination) who was at risk that he could have given it to instead," said Michael Killingsworth, Gokal’s attorney. The department charged him with misdemeanour theft, which a judge dismissed, and reported him to the state's medical licensing board, which cleared him.

"I think this is a real failure of society and our most egregious sin to be at this stage where we have hospitals overwhelmed, ICUs overwhelmed and hitting this mark in terms of deaths per day."

— Dr. William Moss of Johns Hopkins University on rising death counts from COVID in the U.S.