"Literally over the past few days, it has become increasingly clear that there is no constructive path forward," he said, speaking at a mining conference in Florida about the company's decision to suspend its Frontier project in Alberta.

"The project has landed squarely at the nexus of a much broader national discussion on energy development, Indigenous reconciliation, and of course climate change, so we are stepping back to let Canada have this important discussion without a looming regulatory deadline for just one project."

The Vancouver-based company said it will take a $1.13-billion writedown on the Frontier project, which was expected to create an estimated 7,000 construction jobs, 2,500 operating jobs and about $12 billion in federal income and capital taxes, but was also expected to produce about four million tonnes of greenhouse gas emissions per year over 40 years.

Teck's decision comes only days before the federal government was expected to make a decision on the $20-billion project, though the future, and economic viability, of Frontier was still uncertain enough that analysts did not factor it into their valuation of the company.

Critics have pointed out that the mine, designed to produce 260,000 barrels of oil a day, wouldn't have been profitable unless North American oil prices were above US$75 a barrel, more than US$20 above where it currently trades.

Lindsay said Teck has no timeline for any potential resubmission for the project, and that it will focus on its priority projects.

Opposition Leader Andrew Scheer put the blame for the suspension squarely on Prime Minister Justin Trudeau and his inaction on the rail blockades.

Alberta Premier Jason Kenney also pointed to the lack of action on the blockades as part of the reason for Teck's decision. The blockades east of Toronto, which police moved in on Monday to dismantle, were related to opposition to a natural-gas pipeline project planned to run through Wet'suwet'en territory that is opposed by hereditary chiefs.

Industry Minister Navdeep Bains said the decision underscores the importance of all levels of government to work together on ambitious climate targets, including net zero emissions by 2050.

"Canadians don't want finger pointing, they want us to work together, they want us to collaborate, they want us to have a concrete plan to address climate change, and I think we have a responsibility because it's important of course for the well being of Canadians, it's also important for businesses and investors as well."

Fourteen First Nations and Metis communities had signed participation agreements with the company on the mine, some of which expressed shock at the decision.

Ron Quintal, president of the Fort McKay Metis, said in a statement that the political treatment of the project had been "deplorable."

"This is a black eye for Canada. This is a blow to Canada's global investment competitiveness."

The group Indigenous Climate Action, however, said the decision is a win for Indigenous rights, sovereignty and the climate.

Chief Gerry Cheezie of Smith's Landing First Nation, a downstream community that opposed the project and didn't sign an agreement on it, welcomed the news.

"Our community's survival is at stake. We are already feeling the impacts of the changing climate and the environmental degradation caused by the historical industrialization of our lands and territories. We can't afford another tarsands project," he said in a statement.

Environmental groups also cheered the decision as reflecting the economic challenges of the project and the realities of climate change, while the Canadian Chamber of Commerce said the decision shows the urgent need to figure out how to balance climate change and resource development.

"The Teck Frontier Mine, a project 10 years in the making, joins the long list of resource projects let down by our regulatory system. Without serious improvement, it will not be the last," said president Perrin Beatty in a statement.

News of the withdrawal helped send the company's shares down almost eight per cent in early trading on the Toronto Stock Exchange, though it closed down less than three per cent amid wider losses in the market. The impact was tempered because the overall uncertainty around the project had been priced into the stock already, analysts said.

National Bank analyst Shane Nagle said the decision was neutral for the stock, but that it should remove some uncertainty for the company and ultimately reduces its exposure to the oilsands.

"Like all companies in the resource sector, an increased focus from funds on reducing the impact of operations on climate change is becoming increasingly important," said Nagle in a note.

BMO analyst Jackie Przybylowski, however, said the decision was negative as it removes a potential boost to the stock.

"The long list of initiatives that could provide positive catalysts has been cut, and we now ascribe a higher likelihood for negative headlines in the near term."

Teck CEO Lindsay said that the decision on the project was in the best interest of shareholders and all Canadians, and he hopes it helps provide space so that crucial questions that big resource projects have raised can be resolved.

"It is our hope that this withdrawal will help create both the space and the impetus for this critical national discussion to move forward."

This report by The Canadian Press was first published Feb. 24, 2020.

Companies in this story: (TSX:TECK.B) 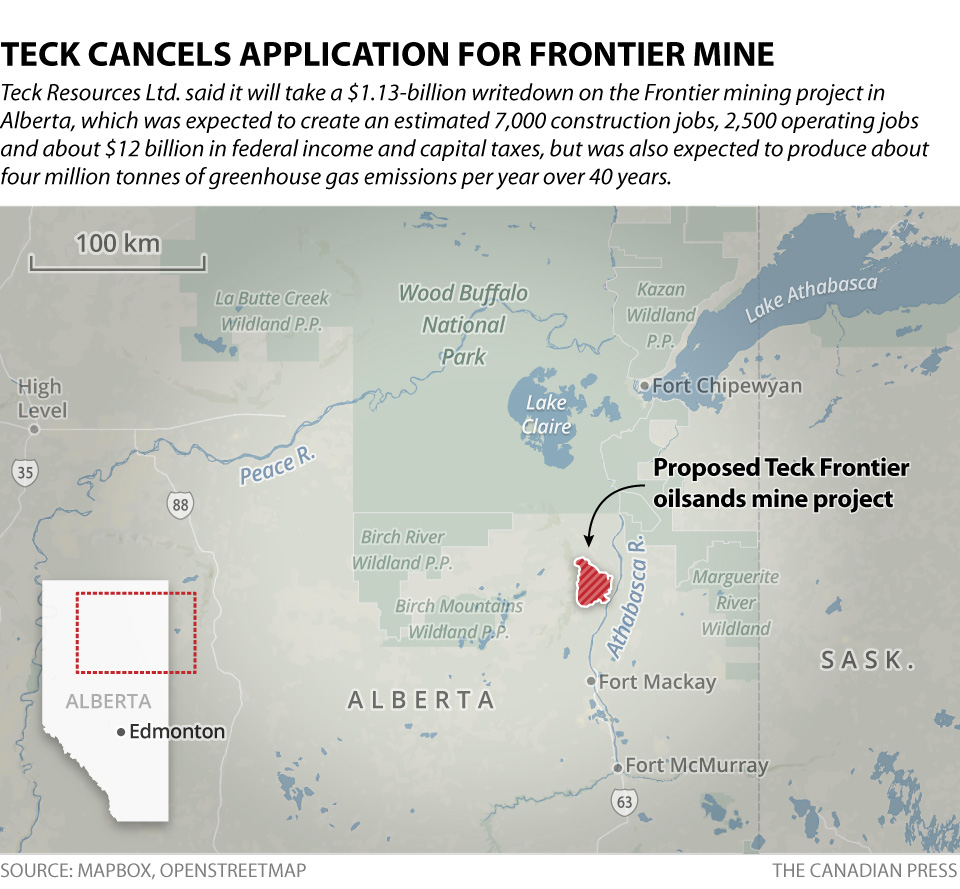