OTTAWA - Annamie Paul is no longer staring down the barrel of a booting from her perch atop the Green party.

OTTAWA – Annamie Paul is no longer staring down the barrel of a booting from her perch atop the Green party.

Party executives have called off a non-confidence vote that was slated for Tuesday and could have led to the leader’s ouster, according to two party sources who were granted anonymity because they were not authorized to speak publicly.

The vote by federal council would have required support from three-quarters of the 13-member governing body in order to proceed to a party-wide vote the following month at a general meeting, where an ultimate judgment on Paul’s leadership could have been rendered by the grassroots.

A party membership review, launched last week by Green interim executive director Dana Taylor, that would suspend Paul’s membership, has also been shelved for the time being, the sources say.

It was not clear why the vote and review were nixed.

Green spokeswoman Rosie Emery said the party has no comment, but that Paul would hold a press conference Monday morning.

The party has been riven by feuding and factionalism for months as Paul, who was elected leader in October 2020, struggles to steer the Greens in a new direction.

Last month, federal council members passed a motion demanding that Paul hold a press conference with Green MP Paul Manly and repudiate comments from a top adviser to the leader.

Paul fired back against party executives on June 16, calling them out for “racist” and “sexist”‘ accusations that were included in the written motion obtained by The Canadian Press. She is the first Black woman to lead a federal political party in Canada.

On June 30, party president Liana Canton Cusmano told members at a virtual town hall that Paul has failed to live up to council’s ultimatum or to “meet her obligations as leader,” citing Green MP Jenica Atwin’s defection to the Liberals earlier in the month.

Council’s demands followed internal strife that exploded into the open after a social media post from Noah Zatzman — the Paul adviser, who has since stepped aside — that called out unspecified Green MPs for antisemitism.

Atwin had warned about Israeli “apartheid” in a Twitter post on May 11, deeming Paul’s more traditional statement on violence in the Palestinian Territories “completely inadequate.” The Fredericton MP cited the “distraction” of party turmoil over the Mideast crisis in May after she crossed the floor.

Atwin’s post has since been deleted, though she told CTV’s Question Period on June 13 that “I certainly stand by what I’m saying.” The next day, she adjusted her stance on Israel to align with the governing Liberal party she had just joined.

Paul called Atwin’s stated rationale for crossing the floor a “completely manufactured reason,” and noted that the parliamentarian said the Green leader was not a key factor in her departure.

Other problems have hampered the Greens, including a halving of the payroll this month despite Paul’s objections due to financial imbalances reported by party brass. Green executives also moved to withhold funding from Paul’s campaign to win the Toronto Centre seat as Canada’s 44th federal election looms.

Paul, who does not have a seat in the House of Commons, came in second to Liberal Marci Ien in a byelection last fall to replace former finance minister Bill Morneau in the riding, a Liberal stronghold. Paul came in fourth place when she ran there in the 2019 general election.

This report by The Canadian Press was first published July 18, 2021.

Paul zeroes in on 'small group' of party execs 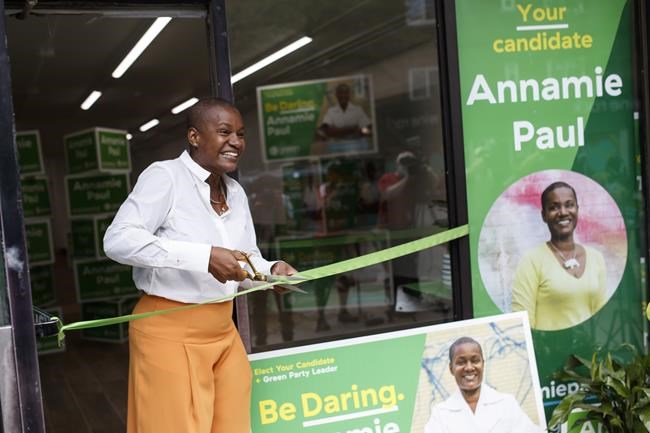