Help us deliver reliable news during this pandemic.

We are working tirelessly to bring you trusted information about COVID-19. Support our efforts by subscribing today.

A map released by the City of Vancouver highlights areas that would see the most severe damage during a significant earthquake.

The map has been produced as part of the city's ongoing investments to assess earthquake risk and upgrade infrastructure.

It shows a magnitude 7.3 earthquake would cause the most damage to Vancouver's older, multi-family residential and commercial areas.

Neighbourhoods in Chinatown, the west end, Kitsilano, and south Granville would be hit the hardest, with pockets of damage also highlighted in the Point Grey, Strathcona, Mount Pleasant and Marpole areas.

But the map also shows much of the southern half of Vancouver could see limited damage, although a statement from the city says disruption from such a powerful shaker would be felt city-wide. 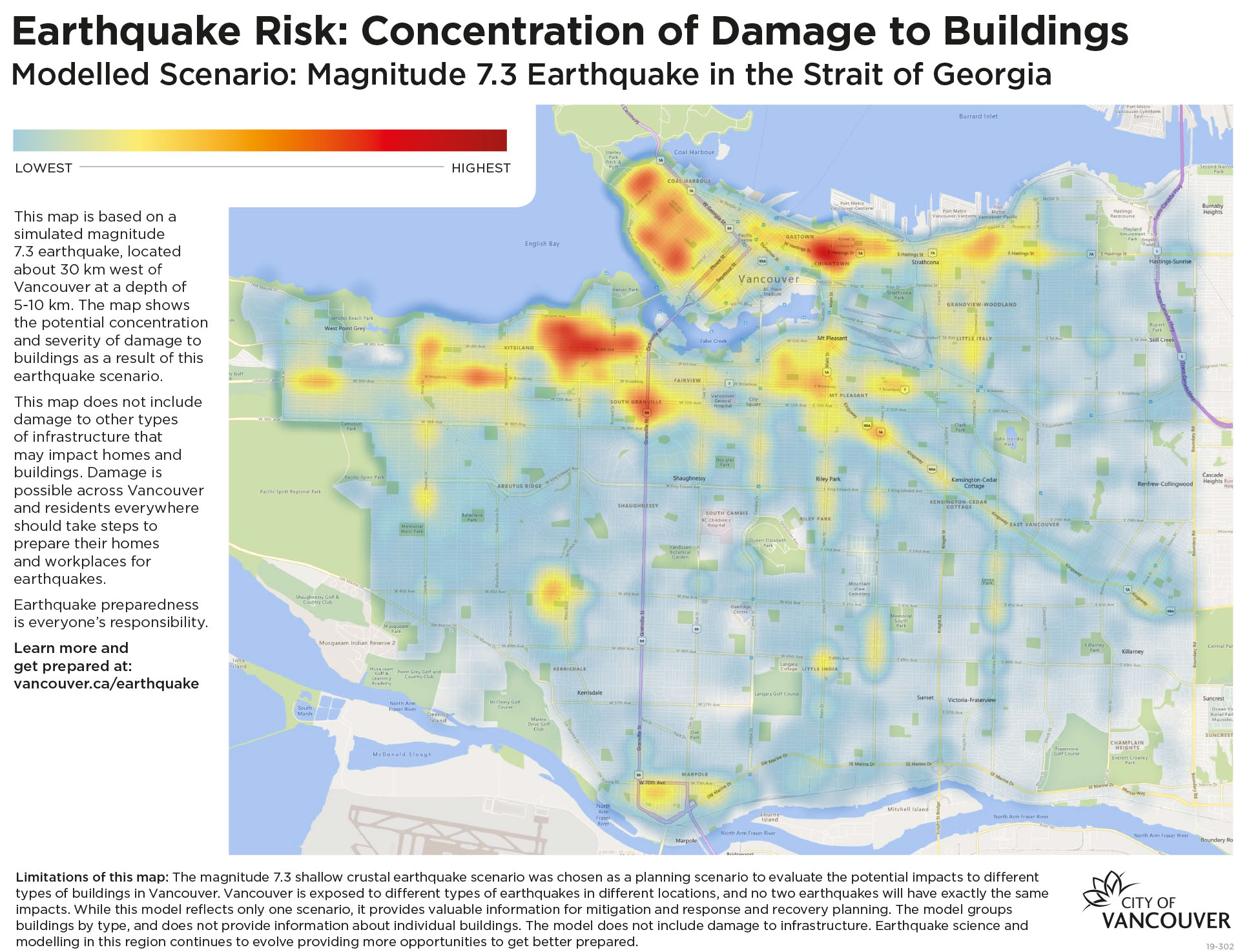 City officials are releasing the map in preparation for the 2019 Great British Columbia ShakeOut drill, due to be held across the province at 10:17 a.m. on Thursday.

"During an earthquake the best thing you can do is drop, cover, and hold on," says the city's statement.

The drill is designed to encourage all British Columbians to practice their response to an earthquake and assess emergency preparedness.

Vancouver Fire Chief Darrell Reid says beyond participating in the drill, everyone should be prepared.

"Know the risks, make a plan and have the emergency supplies you need to get by so first responders can prioritize life-saving calls," says Reid.

The area of greatest risk in B.C. is along the Cascadia subduction zone, a fault running from northern Vancouver Island to northern California, separating the Juan de Fuca plate east of Vancouver Island and the North American plate which supports much of the south coast.

Earthquake analysts say the Juan de Fuca plate is skidding below the North American plate, creating the potential for a major slip along the fault line, which would trigger a powerful earthquake.

The B.C. government's earthquake and tsunami guide says quakes powerful enough to cause structural damage happen in the province on an average of once per decade.

The province says there have been four large shakers since the devastating magnitude 9.0 earthquake in 1700, including a 7.8 quake that caused significant damage across Haida Gwaii in 2012.

This report by The Canadian Press was first published Oct. 16, 2019.

Your support has enabled us to provide free access to stories about COVID-19 because we believe everyone deserves trusted and critical information during the pandemic.

Our readership has contributed additional funding to give Free Press online subscriptions to those that can’t afford one in these extraordinary times — giving new readers the opportunity to see beyond the headlines and connect with other stories about their community.

To those who have made donations, thank you.

To those able to give and share our journalism with others, please Pay it Forward.

The Free Press has shared COVID-19 stories free of charge because we believe everyone deserves access to trusted and critical information during the pandemic.

While we stand by this decision, it has undoubtedly affected our bottom line.

After nearly 150 years of reporting on our city, we don’t want to stop any time soon. With your support, we’ll be able to forge ahead with our journalistic mission.

If you believe in an independent, transparent, and democratic press, please consider subscribing today.

We understand that some readers cannot afford a subscription during these difficult times and invite them to apply for a free digital subscription through our Pay it Forward program.

The Free Press would like to thank our readers for their patience while comments were not available on our site. We're continuing to work with our commenting software provider on issues with the platform. In the meantime, if you're not able to see comments after logging in to our site, please try refreshing the page.

Comments are open to The Winnipeg Free Press print or digital subscribers only. why?

Comments are open to The Winnipeg Free Press Subscribers only. why?

By submitting your comment, you agree to abide by our Community Standards and Moderation Policy. These guidelines were revised effective February 27, 2019. Have a question about our comment forum? Check our frequently asked questions.