A hole in the heart of our newsroom

A newsroom, and those in it, tends to become hardened to the grimmest of breaking news, which shouldn't come as news to anyone. But this week, our newsroom received breaking news of the personally heartbreaking kind.

A newsroom, and those in it, tends to become hardened to the grimmest of breaking news, which shouldn’t come as news to anyone. But this week, our newsroom received breaking news of the personally heartbreaking kind.

Seven colleagues lost their jobs Tuesday. Among them were some of our youngest and most talented. People whose faces and writings are familiar to the readers of news, sports, arts and social media. The layoffs had nothing to do with their performance and everything to do with the performance of the Free Press bottom line, even though, unlike many newspapers, ours is still profitable. It was their junior status in the union that singled out six of the seven. Last in, first out, as the saying goes.

But then even the seventh, deputy editor-online John White, was a relative newcomer among managers.

Free Press editor Paul Samyn, who was only officially appointed this month but has been with the paper for nearly 25 years, was left to formally deliver the news, individually, in his office. Although earlier, in a classy display of sensitivity and respect, sports editor Steve Lyons took Adam Wazny out for lunch and gave his once-rising young star a heads-up. Of the others, some sensed what was coming when they were summoned into the office for an “announcement.”

Not music writer Rob Williams, though. He was already in the newsroom, in the midst of writing a story, when he was told the editor wanted to see him. When Rob returned, layoff letter in hand, a group of colleagues gathered around his desk.

“What stood out for me was how much people cared,” one of Rob’s colleagues recalled. “That, and all the tears.”

Arts writer Alison Mayes, who endured a devastating 1999 strike at the Calgary Herald, would follow Rob into the editor’s office. The others had already, or would, take their turns; social media reporter Lindsey Wiebe, news reporter and National Newspaper Award-nominated feature writer Melissa Martin and web paginator Mark Lowe.

It isn’t as if anyone in the news business, be it print or broadcast, isn’t aware of the shaky economic times the world’s traditional media are embroiled in. Over the summer, the Calgary Herald laid off 30 staff, about one-third of its newsroom employees. CBC has been shedding jobs due to budget cuts. Other departments within the Free Press have also been affected in recent months. And it isn’t as if the fear of layoffs wasn’t out there, or, for that matter, that most of the unlucky seven weren’t aware of their vulnerable status.

Still, it’s one thing to see what’s coming down the track; it’s another thing to be standing there when the freight train hits you.

However, when that freight train hit, in keeping with the character of the place, no one was walked out, at least not the conventional way.

Rob Williams’s colleagues formed a kind of honour guard all the way out to the parking lot. And Wednesday afternoon, Mark Lowe was back sitting at his desk. It might have seemed as if nothing had happened the day before if it hadn’t been for the box full of personal belongings Mark was packing.

Earlier Wednesday, a reporter who had spent the previous night consoling a friend at home over a bottle of wine, received a consoling email herself from a friend half a world away.

“I’m sorry to hear of the losses,” Winnipegger David Pankratz wrote from Ethiopia. “And even the survivors, I’m sure, aren’t celebrating. All the best to you and your colleagues.”

In a way, many of the survivors were celebrating that night.

We gathered at The King’s Head Pub, near historic Newspaper Row, to celebrate our departing colleagues. There were no tears by then, but there was lots of embracing, beer-buying and even laughing.

Adam Wazny was wearing a Detroit Tigers cap, a big smile and joking with his sports department teammates about getting together to commiserate with recently fired Bombers head coach Paul LaPolice. An effervescent Melissa Martin, attired in a stylish floral party dress and fishnet stockings, looked like she was in the mood to pop a champagne cork.

The mood was less party-like for those of us learning what survivor guilt feels like. When I arrived, I couldn’t find the words to say anything to one of the six who turned up for their own wake. At first, I just stared at Lindsey Wiebe. Lindsey’s the age of my kids; she’s the News Cafe’s web wizard who had always been there to tutor newsroom Luddites like me on the new reality of techie tools such as Twitter.

Eventually, I would wrap my arms around Lindsey, and later Rob Williams, who held on like he didn’t want to let go.

Of course, none of us wanted to let go of them, either, least of all Paul Samyn.

Many of them represent our future.

Now, as uncertain as their futures may seem, even with their talents, they have to make their own. But, here’s some more breaking news.

All our futures are uncertain.

In fact, the only thing I’m certain about today is there’s a hole in the heart of our newsroom.

What's wrong with the newspaper? 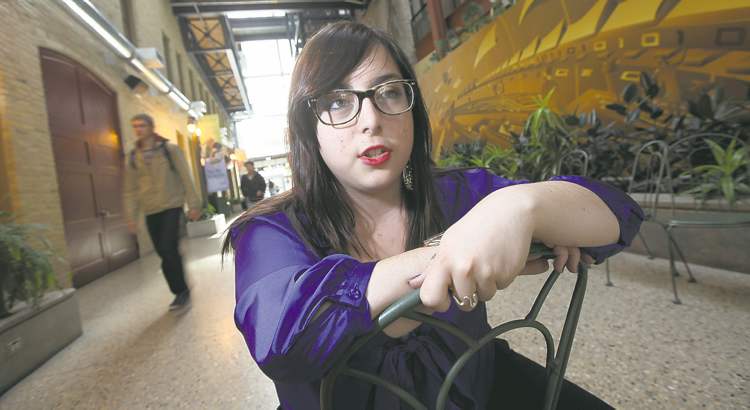