Peguis gets a jump on expected deluge

PEGUIS FIRST NATION -- The Fisher River has spilled its banks so many times in recent years, fighting floods has become routine for people living along this Interlake waterway.

PEGUIS FIRST NATION — The Fisher River has spilled its banks so many times in recent years, fighting floods has become routine for people living along this Interlake waterway.

In 2009, a spring flood forced about 650 residents of Peguis First Nation out of their homes and into hotels, mostly in Winnipeg. While the recovery was still underway, another 260 people fled following torrential rains during the summer of 2010.

The prospect of another spring flood has prompted a community-wide effort to fill 100,000 sandbags, build dikes around riverside homes and make plans for yet another evacuation from Manitoba’s largest flood-prone community that has no permanent form of flood protection.

“It does get sickening,” dike-builder Cyril Cameron said Tuesday in front of the second out of 75 homes that must be protected before the Fisher River rises this spring. “But every year is different. At least this year, we got the jump on it.”

On Tuesday in Peguis, dozens of volunteers buzzed about a former recreation centre that’s been converted into emergency-management headquarters. Thousands of sandbags are piled up in the hallways to prevent them from freezing, making the corridors look like Second World War foxholes.

About 4,000 sandbags a day are being filled with the help of a semi-automated ‘octopus’ machine. Dozens of water pumps and portable generators are lined up in neat rows.

Emergency co-ordinator William Sutherland said he prays every able-bodied member of this Cree and Ojibwa community of about 4,800 will take part in this spring’s flood fight. But he concedes he’s tired, just like the majority of Peguis residents.

About 50 people evacuated last summer remain in Winnipeg, under the care of the Manitoba Association of Native Firefighters, Hudson said. The average Peguis residence is now home to five people, he added.

The cycle of flood-preparation, cleanup and recovery could be avoided with the help of higher dikes or a diversion of the Fisher River. A preliminary study suggests that may cost $190 million, but neither Peguis nor Indian and Northern Affairs Canada is prepared to spend that kind of money

In 2009, Peguis and Ottawa reached a $126-million deal to compensate the First Nation for being forced off its former lands east of Selkirk during the 19th century. Hudson said the compensation money must not be used for infrastructure and he’s frustrated Ottawa won’t provide additional funds for flood protection.

“It’s been a problem every year since 1974. Maybe it’s because of who we are?” he said, adding half the roughly 900 homes in Peguis are potentially at risk from a major flood. “We are living in water. Would anyone other than First Nations accept these conditions?”

Indian and Northern Affairs Canada declined to comment about permanent flood protection for Peguis. But spokesman Jeff Solmundson noted Ottawa has helped the First Nation identify flood-prone homes and protect them through a combination of diking, moving them up higher and relocating several properties. Ottawa has also given Peguis $3.7 million to help recover from previous floods, Hudson added. But he called this year’s pledge of $200,000 too little to wage what he called a multimillion-dollar fight.

Last week, provincial flood forecasters predicted the Fisher River will not flood this spring as badly as it did in 2009. But there will still be some overland flooding at Peguis.

“They have to build something along the Fisher River,” said Cameron as his crew prepared to begin placing sandbags around a bungalow. “But that takes money, and money is something we don’t have, so that’s why we’re out doing this every year.” 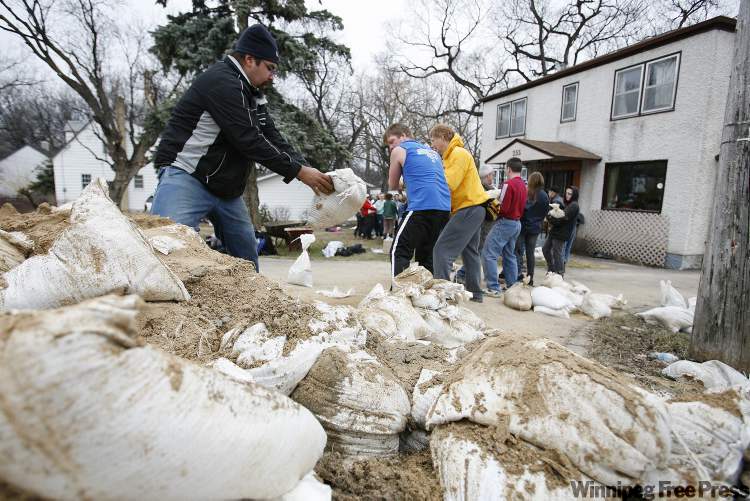