If you rummage through a Winnipegger's trash can, there's a good chance it's full of food scraps and leftovers that could be composted.

If you rummage through a Winnipegger’s trash can, there’s a good chance it’s full of food scraps and leftovers that could be composted.

According to a 2009 waste-composition study released through a Freedom of Information request, more than one-quarter of all trash Winnipeggers generate is food waste, which contributes to harmful gases and contaminants released by landfills. Another 25 per cent is recyclable paper and packaging materials such as newspapers, egg cartons and cardboard.

While some of this trash gets recycled, a lot of it is still heading to a landfill.

City solid waste manager Darryl Drohomerski said reducing food and organic waste will be a key part of Winnipeg’s new waste-management strategy, which is expected to be unveiled in early September and put to a council vote before the end of the month. Winnipeggers are among the worst recyclers in the country, and Drohomerski said only between 18 and 20 per cent of all waste is diverted away from landfills. Winnipeg won’t be able to get that rate up to 50 per cent without addressing organic and yard waste, he said.

“We should be able to do better,” Drohomerski said. “We’re doing OK, but we need to do a lot better compared to what other centres are doing.”

The province hired a consulting firm in 2008 to find out what’s inside the blue boxes and trash bags residents of Winnipeg, Brandon and Portage la Prairie put out for pickup. Consultants sorted through what’s thrown out in low-, middle- and high-income areas of Winnipeg in June 2008 and February 2009.

Laurie Streich, director of Manitoba Conservation’s pollution prevention branch, said officials had suspected food waste accounted for a large portion of the trash people generate. Food waste thrown in the garbage contributes to the methane gas released by landfills, Streich said, in addition to leachate, the contaminated liquid that drains from a landfill.

Some cities — including Brandon — have piloted food and organic-waste collection to reduce the amount sent to the landfill, she said.

“It is a sizable chunk, really,” Streich said of the amount of food waste.

Overall, the study found the average Winnipegger generated about 298 kilograms of garbage every year — up from 275 kg in 1996.

Drohomerski said he’s spoken with residents in parts of the city who are frustrated because their blue boxes are sometimes vandalized by area kids and recyclables get scattered everywhere. Other times, he said, recycling may not be a big priority for low-income families.

“I’ve talked to a number of people who say, ‘You know, I’m concerned with putting food on the table and keeping my job. Whether this item in my hand is recyclable is not super high on my priority list,’ ” Drohomerski said.

Winnipeg will implement new strategies to reduce food and yard waste next year before moving to a full organic waste-processing program a “couple years down the road,” Drohomerski said. The city also plans to focus more on education, so more Winnipeggers understand what they can do to reduce the waste that goes into landfills, he said.

Winnipeggers generate a total of about 52,561 tonnes of food waste and 30,000 tonnes of yard waste every year.

Dave Elmore, a retired engineer who does compost education with local non-profit Green Action Centre, said many people are still reluctant to compost because they falsely believe it smells bad and will take up too much time. Elmore said 40 to 80 per cent of what people throw away can be composted, including food, leaves and grass clippings. The key is teaching people how to do it properly, and he hopes the city will focus its efforts on educating people about how to compost at home, he said.

“It’s not as much work as they think and it doesn’t have to stink.” 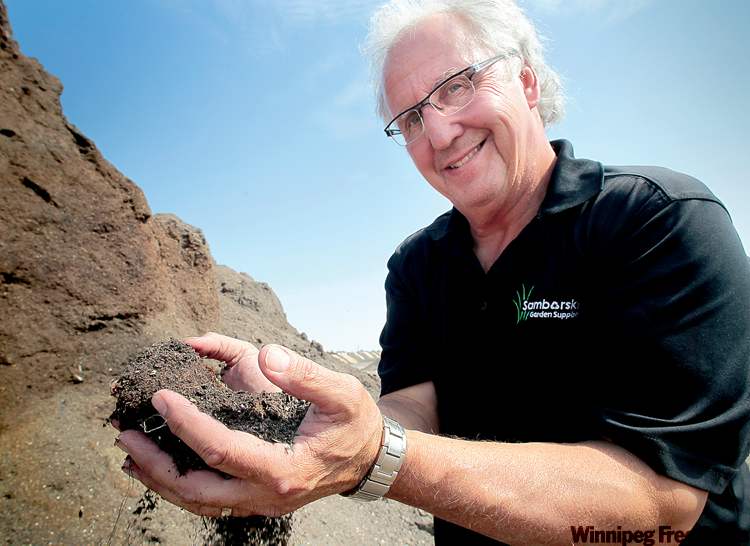 What’s in your garbage bag?

THE average Winnipegger generates about 298 kilograms of garbage every year. More than half of that waste is made up of compostable food waste and other paper and fibrous items, such as newspapers and egg cartons. While some of the waste gets recycled, Winnipeg has one of the lowest trash-diversion rates in the country, so a lot of it still goes to a landfill. Here’s a breakdown of what a waste audit found in people’s garbage bags and blue boxes: