Which is why he was so shocked last week when his customers arrived and asked if his Vietnamese diner, Vi-ann, was going away.

That’s how Bui learned that as the bustling Shoppers Drug Mart at the corner of River and Osborne seeks to expand, the buildings that house Vi-ann and hip video-rental hotspot Movie Village could be sold and demolished to make way for the 24-hour retailer’s renovations.

"I’m so worried," Bui said, turning tear-streaked eyes to the restaurant’s frosted windows. "I’ve worked so hard for this. If (my landlord) sells, I don’t know where to go."

For more than a decade, Bui, 55, has run Vi-Ann out of the ground floor of the little Osborne Street building. Expecting to renew his lease next June, he put new carpets in and added more lights to the low-ceilinged room.

video player to use on WFP

Then the news came out that his tenancy may not last so long. The proposed Shoppers Drug Mart expansion, which would almost double the store’s retail space, will go before the city’s board of adjustment for approval on Wednesday. If the proposal earns a thumbs-up from city planners, Bui and his business will have to move.

Martin Ringer, who owns the two buildings on the sale block, declined to comment on Wednesday.

Ringer’s son David opened Movie Village more than 20 years ago; he has not yet announced what might happen to that business if the development plan goes ahead.

In a way, it’s a straightforward real-estate transaction: Someone wants to sell and someone wants to buy. But change is never easy, especially in this cozy part of the city’s urban heart.

"Osborne is a special place in Winnipeg," said Barry Pomeroy, a University of Winnipeg professor who is helping to organize a Facebook campaign to block the proposed Shoppers expansion and save Vi-ann. "It is a unique community; it’s a great mixture of people who live there. I just don’t think that this expansion is really going to serve the Osborne Village residents."

With Pomeroy’s help, a petition against the project is now circulating. Customers are planning to join Bui at the public hearing next Wednesday.

Vi-ann’s owner is anxious about speaking before the city’s planners; he fears his English isn’t strong enough.

"But I will talk to them," Bui said. "I have to stand up for myself. I want (city planners) to think twice before they do that."

Bui said he understands the proposal isn’t personal, just the way real estate can work. He is a businessman, after all, and knows the value of a dollar — the dollar he didn’t have when he first arrived in Canada.

"You know the boat people?" Bui said, tapping his fingers against a palm-sized cup of orange tea. "I’m one of them."

In 1975, Bui was among 6,000 Vietnamese to flee to Canada at the end of the Vietnam War. He was 19, penniless, and couldn’t speak a word of English. With little education and few skills, he took a labourer’s job in a Winnipeg factory, earning just over $2 an hour.

Twenty-five years later, that company honoured Bui with a retirement party and a gold watch. He had saved enough to buy his own restaurant.

So in 2001, Bui bought Vi-ann for $100,000. At the time, he believed it would be the last job he would ever take. Now, it seems, his newcomer’s dream may not end that way — but how it will end is not yet clear. Bui said the building’s owner offered him $10,000 to relocate Vi-Ann. That’s not enough, he said, to move his four-employee business to a new home.

But maybe, as long as the customers of the cozy restaurant rally around its banner, his dream will find its way to carry on. They have already made posters to show their support: "I need my soup, I love my soup, please don’t take away my soup," one customer scrawled on a Save Vi-ann poster.

Bui gazed at the message and smiled.

"Their support makes me feel very good," he said. "And I need that now." 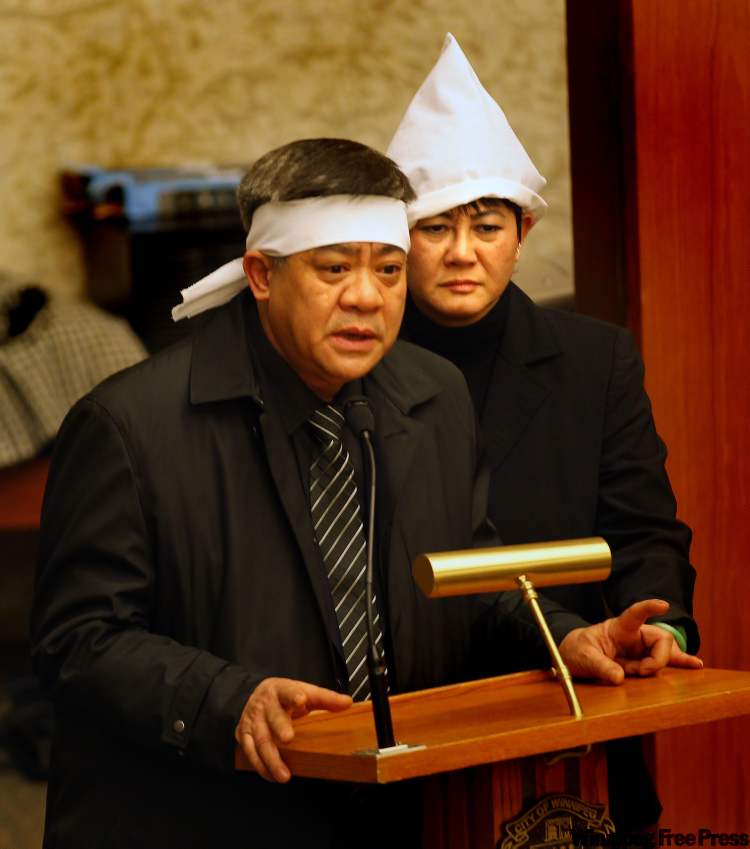