Justice seen to be done when cameras allowed in court

There were no dramatic outbursts. No "You want the truth... You can't handle the truth" confrontations. No Law & Order-style plot twists worthy of the infamous "chung chung" gong.

There were no dramatic outbursts. No “You want the truth… You can’t handle the truth” confrontations. No Law & Order-style plot twists worthy of the infamous “chung chung” gong.

What Manitoba’s first live-broadcast criminal case may have lacked in Hollywood-style sizzle, it certainly made up for by packing plenty of substantive punch.

The early verdict, at least from this little corner of the courthouse, is the bold new initiative to make the justice system more accessible than ever will go a long way toward educating the court of public opinion about its inner-workings.

No, it’s not perfect. Yes, more can, and hopefully will, be done in time. But the importance of this pilot project, which took its first steps Wednesday, can’t be overstated.

In the past, a simple headline that Cassandra Knott walked out of a Winnipeg court with her freedom intact after beating a second-degree murder charge may have led to plenty of public condemnation about another weak-kneed and poorly thought-out decision from the bench.

To anyone who watched and listened as Court of Queen’s Bench Associate Chief Justice Shane Perlmutter carefully delivered his extensive reasons, it was clear how much time and effort was involved. At least some of the typical howls of protest seemed to be muted by a refreshingly different perspective.

“It’s interesting how much thought one judge has to put into giving a decision,” said Lisa Toupin, who viewed a live online feed of the verdict as it happened Wednesday.

For those who spend any time at the Law Courts, this wouldn’t have come as a surprise. But that’s the whole point here. Most people can’t find time in their busy lives to head down to 408 York Ave. and park themselves in a courtroom even if they want to.

So broadcasting important court cases as they happen is reaching an audience that would otherwise be foreign to the process. That’s the “open-court principle” that is driving this project, which will no doubt have legal eyes from across the country watching closely.

“I thought it was great. Very well laid out and easy to follow,” said Linda Manson, who spent part of her afternoon watching the live court action on her computer.

She certainly wasn’t alone. Thousands of people viewed the live-stream feed at www.winnipegfreepress.com, and those numbers continue to grow. The number of viewers only grew as Perlmutter read his 52-page verdict, showing interest was gaining, not waning, despite the technical legalese involved.

Many other local media outlets carried the case live, so there’s no telling exactly how large an audience was reached. It’s clear pretty much every person who tuned in Wednesday would not have been in the court to hear the decision.

From a production point of view, the first broadcast went off without a hitch. The video and sound quality were top-notch.

Perlmutter didn’t play to the camera in any way, save for a quick explanation at the beginning about why this case was being broadcast. His decision was likely exactly the same one he would have read if the camera wasn’t in the courtroom, meaning nothing about the verdict was in any way altered or manipulated.

In a lot of ways, it was the perfect test case. It involved an issue so many Manitobans can relate to — domestic violence — and ended with a not guilty verdict on the type of defence not often seen.

“Superb quality but would have liked to see the rest of the courtroom,” said Austin Grabish, a University of Winnipeg student who tuned in. Many other expressed similar views, asking to see the lawyers or even the accused. For now, what was presented Wednesday will have to suffice.

The pilot project will only focus on verdicts or sentences being delivered in Court of Queen’s Bench or provincial court cases, meaning it will primarily be the judge who takes centre stage and not any of the other actors in the justice system. There will be no trials, no testimony. At some point that could change, but certainly not in the early days of this experiment.

At the Court of Appeal level, full hearings can be broadcast, beginning with the April 30 case of Jér¥me Labossière, convicted of three counts of first-degree murder for the slaying of his parents and brother.

All of these made-for-TV cases are subject to legal challenges from lawyers who can seek to exclude cameras if they can provide sufficient reasons.

But rather than worry about where things might be headed, it’s worth celebrating just what has been accomplished already.

Because on Wednesday, justice wasn’t just done. It was also seen to be done. 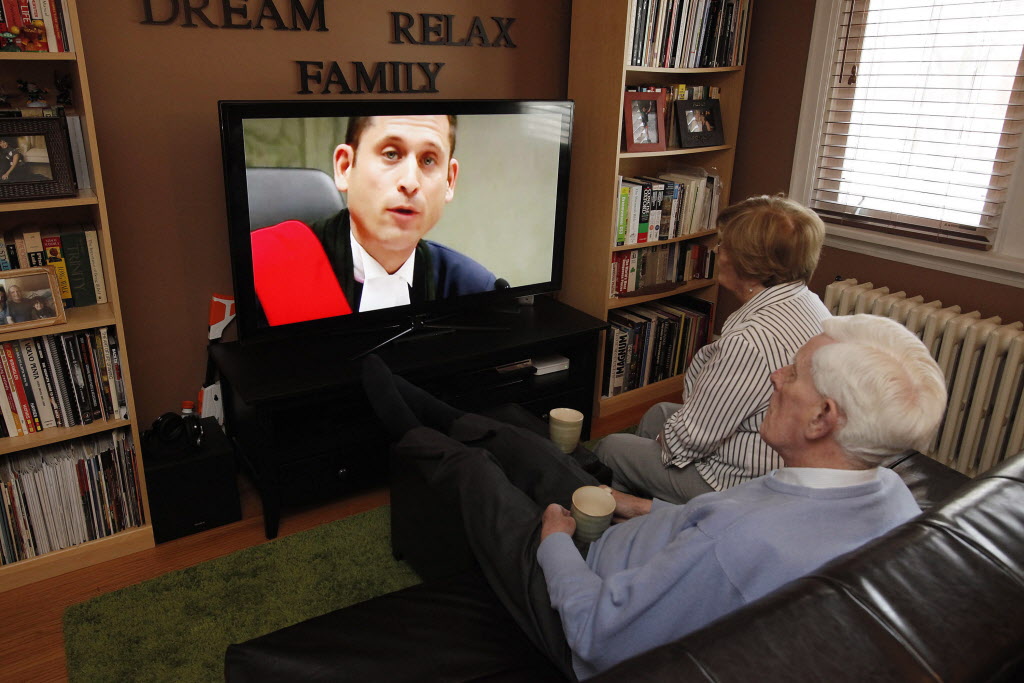