Man, calming traffic can really get the adrenalin going.

Man, calming traffic can really get the adrenalin going.

For those who thought we in sleepy River Heights were a boring, complacent lot, try building a “bump out” in the neighbourhood.

Construction at the intersections along Grosvenor Avenue, particularly the west end of that street, has tongues wagging. For some of us who have been around for a few years, it recalls Sandy Hyman’s foray into neighbourhood traffic planning some 15 years ago. Didn’t go so well then, either.

The golden rule of traffic engineering is that when you try to solve the problems of one route by pinching off vehicle access, you’ll enrage the residents of the nearby streets that are affected.

St. Boniface Coun. Dan Vandal rues the very mention of bump outs, which expand curbs a couple of metres into a street, intentionally slowing motorists way down. In 2001, he had the curbs on Lyndale Drive bumped out, hoping to push speedsters to busier arteries. Residents and motorists revolted and they were gone — all the bumps ironed out – in a year.

Now numerous routes in the city are undergoing reconfigurations with bump outs, this time as part of the city’s massive street works program to get more people on bikes and out of their cars.

There are 30-plus such projects around Winnipeg, and at a cost of $20 million they mark a huge leap forward in the active transportation agenda, which has had to settle for comparative chump change thrown at it over the years. But even at $20 million, this year’s construction bites off a small piece of an ambitious plan to turn Winnipeg into a more bike-able place for pleasure riders and commuters.

Parking lanes are being wiped off the streetscape, surprising residents and businesses alike. Sections of streets are being turned into one-ways and stops signs are being ripped out for traffic circles to make driving and cycling more fluid.

Some, such as cycling enthusiast Coun. Jenny Gerbasi, are thrilled by the investment, made possible by federal infrastructure spending.

Others, not so much.

How is a cyclist made safer by bump outs that force bikes left into traffic, a few skeptical commuters are wondering. On west Grosvenor, which will lose its street parking to accommodate dedicated cycling paths beside opposing lanes of traffic, the bump outs are smaller than usual and part of five intersection traffic circles, which are also smaller in diameter than is typical with roundabouts. That still pinches a lot of commuters (including buses) into the intersection of a fairly narrow street.

The way I see it, everyone will have to slow down, which, in theory, makes everyone safer — unless the aggressively stupid continue to insist that Grosvenor is a good stand-in for a thoroughfare.

On that point, I should come clean: As a resident of Grosvenor Avenue, which some drivers regard as a thoroughfare, I figure I’m a winner in all of this.

But if I were a resident nearer Kingsway, I’d be worried that motorists will swing my way instead of trying to merge onto the busy Corydon or Academy arteries.

Gerbasi and city planners stress that people should wait to see the final product. And, for the record, Vandal insists there was no trouble with snow clearing on Lyndale when the bump outs were in place. Gerbasi does concede that the one-year offer from the federal infrastructure spending deal meant this phase of the cycling corridors construction was done hastily, which left some neighbourhoods short on consultation. All three of the River Heights-Fort Rouge open houses, for example, were held in Fort Rouge.

The disruption in traffic patterns, as everyone adjusts, is bound to last awhile. This year’s $20-million expenditure was extraordinary — the Harper government has stressed this windfall was made possible only as a recession-fighting measure, and Canada has surfaced from the slump now. There’s a lot left on the to-do list, but when the rest of it (including Kingsway, also on the “active transportation” agenda) gets done is anyone’s guess.

No one ever said that mucking around with traffic patterns is easy (just ask Sam Katz, who vowed to synchronize traffic lights). But as Gerbasi points out, lots of cities have undergone much greater change and lived to tell about it. Strap in, enjoy the ride. Maybe pull out the bike, even? 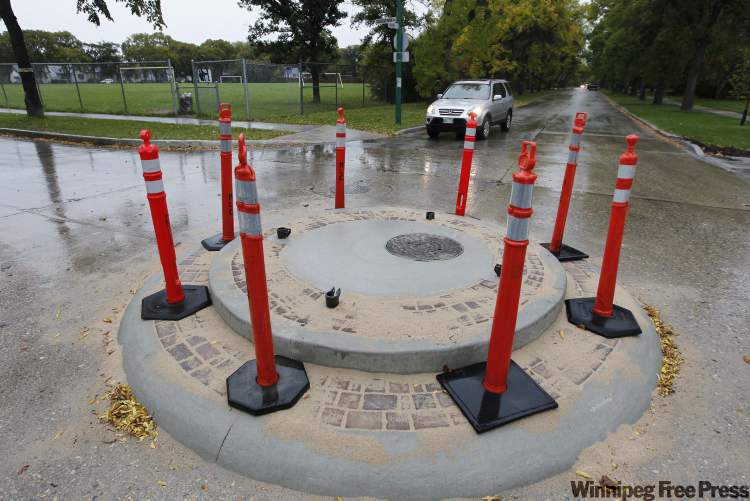