'A bit of a learning process'

Province pulls back on info about COVID cases in schools, cites stigma toward city student

Public health officials are once again pulling back on the amount of information they're sharing about COVID-19 cases and, once again, stigma is cited as the rationale.

Last week, when the first case of COVID-19 was reported at a school in Manitoba, public health officials issued a bulletin stating it involved a student at Churchill High School in Grade 7, Room 20.

On Sunday and Monday, when three more COVID-19 cases were identified in Winnipeg schools, only the name of each school — Daniel McIntyre Collegiate in the West End, John Pritchard School on Henderson Highway and Beaverlodge School at 6691 Rannock Ave., respectively — was provided in the media bulletin. From now on, there will be no mention of whether cases involve staff or students, nor any mention of a grade, room number or cohort, Dr. Brent Roussin said at a media briefing Monday.

"This is a bit of a learning process for us," Roussin said. "I think that when we first started getting the back-to-school plans together, we discussed at that time that we would be naming the schools and the cohorts and that was our plan.

"After doing so, there was a tremendous amount of stigmatizing behaviour that came out," Roussin said.

Public health is now restricting the information it shares after what happened to the Churchill High School student and their family, he said.

"There was pressure on an individual, there was social media posts there, and there was just a concern there that (by) releasing that level of information broadly, it's easier to identify someone," he said.

"Certain educators were letting us know," said Roussin. "We got some feedback that, in that instance, some of the information released there was perceived by some to be too much."

"Yes there were social media posts that would be considered stigmatizing toward the student and the family," Carter said Monday.

"Certain educators were letting us know. We got some feedback that, in that instance, some of the information released there was perceived by some to be too much." ‐ Dr. Brent Roussin

Public health's "learning process" when it comes to sharing information about the virus at schools echoes Roussin getting schooled this summer over identifying COVID-19 cases on Hutterite colonies. At first, backlash over stigmatizing such an identifiable group prompted him to stop saying if there were cases on colonies even though there were clusters in a particular health region. Then, to allay the fears of the rest of the health region's residents worried about catching the virus in their communities, he started identifying such places as "communal living settings."

Roussin said Monday that public health "constantly" reviews its processes and it's revising the disclosure of information involving schools.

"Any time there's an infectious case in a school, we're going to advise Manitobans," he said. Any more information than the name of the school will be shared only with those who need to know, he said.

"Public health will go look and see if there are any concerning contacts," he said. "If there are contacts within a cohort, we will communicate directly with everyone in that cohort and let them know whether they need to self-isolate or not," Roussin said. He knows Manitobans — especially parents of schoolchildren — want more information but Roussin said he has to balance the need for safety with the need for privacy so people don't fear stigma and will get tested when they must.

"We have to find a balance," he said. 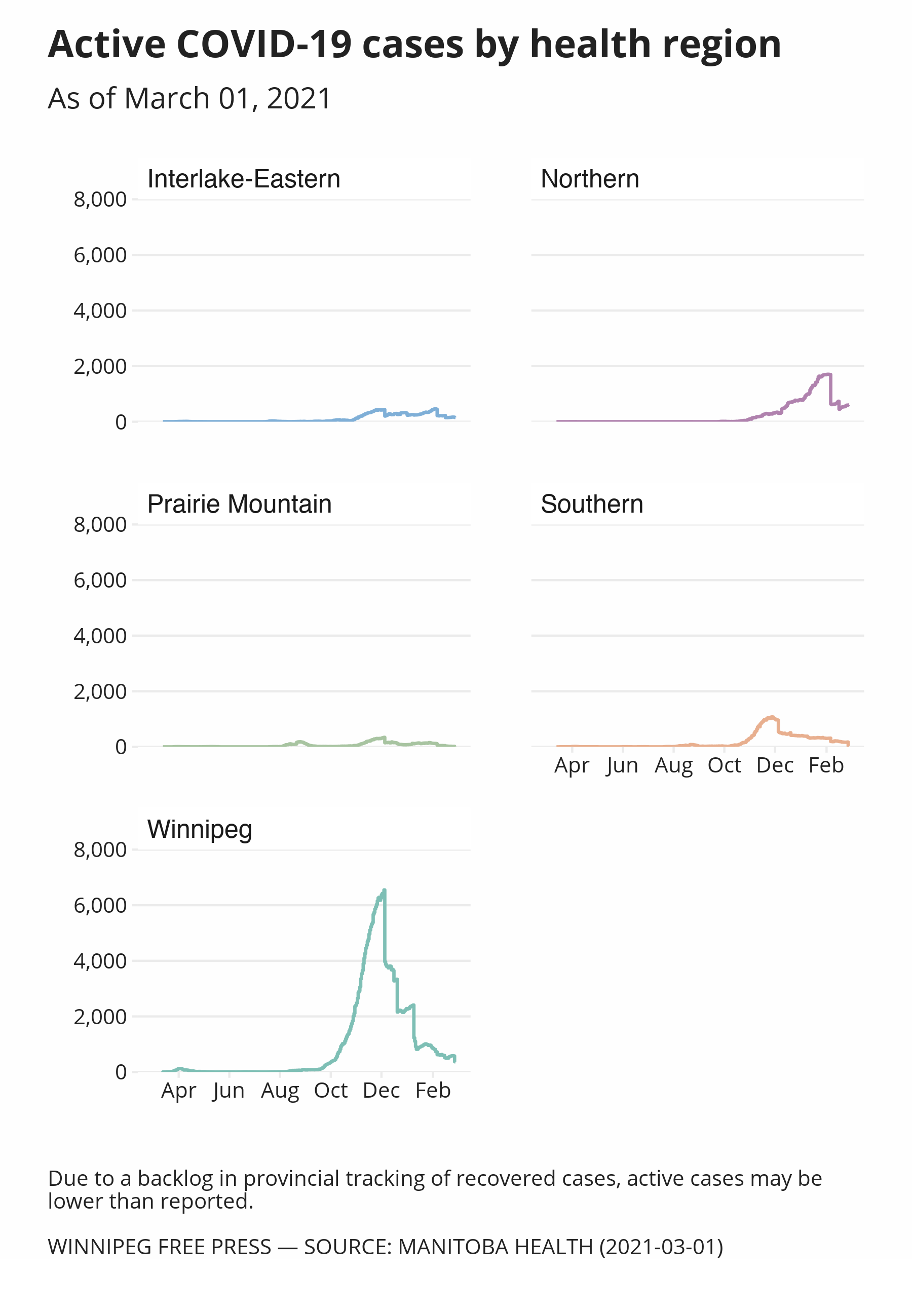 On Monday, Roussin confirmed three COVID-19 cases have been confirmed on Manitoba First Nations but wouldn't identify the communities, saying that is up to their leaders. On Friday, Fisher River Cree Nation announced that one of its members had a presumed positive test result for COVID-19, after being exposed to the virus while in Winnipeg earlier this month. Neighbouring Peguis First Nation reported two positive cases, both of whom were a close contact of another case.

Roussin reported the "individual" who tested positive at Beaverlodge School in Winnipeg was last in school on Thursday in the morning and afternoon, was asymptomatic and had followed all public health measures in place at the school. The school community and the cohort were notified, and additional cleaning of high-touch areas was done out of an abundance of caution, he said.

That infection was not acquired at school, nor were any of the other four school cases reported in Manitoba so far, including one at École New Era School in Brandon.

"Our screening is working," said Roussin. People with symptoms are not at school — and that needs to continue, he said. "We can't let our guard down."

Children mixing with kids in other cohorts outdoors at lunch and during recess is OK as long as they're maintaining a safe distance, he said. Preventing the spread of the virus in the community right now will help keep it out of schools, Roussin said, calling for vigilance.

Manitoba had 21 new COVID-19 cases Monday: 17 in Winnipeg, one in the Interlake–Eastern health region and three cases in the Southern Health. There were 257 active cases with 12 hospitalized including three in intensive care. Infections have ebbed and flowed in different health regions and health districts, as has the source of transmission.

The source of most new COVID-19 cases in the province now is close contacts of known cases, not those who've travelled, Roussin said.