The province announced 25 new COVID-19 cases Thursday, and made good on a promise to provide greater detail on where the novel coronavirus virus is active in Manitoba.

Public health officials are now providing a daily breakdown that shows the number of COVID-19 cases in 68 districts that make up the five health regions.

For example, of the 45 active cases under the Interlake-Eastern health region, more than half are in the Rural Municipality of Springfield district. Of Southern Health's 46 cases, most are in the Cartier/St. François Xavier district. 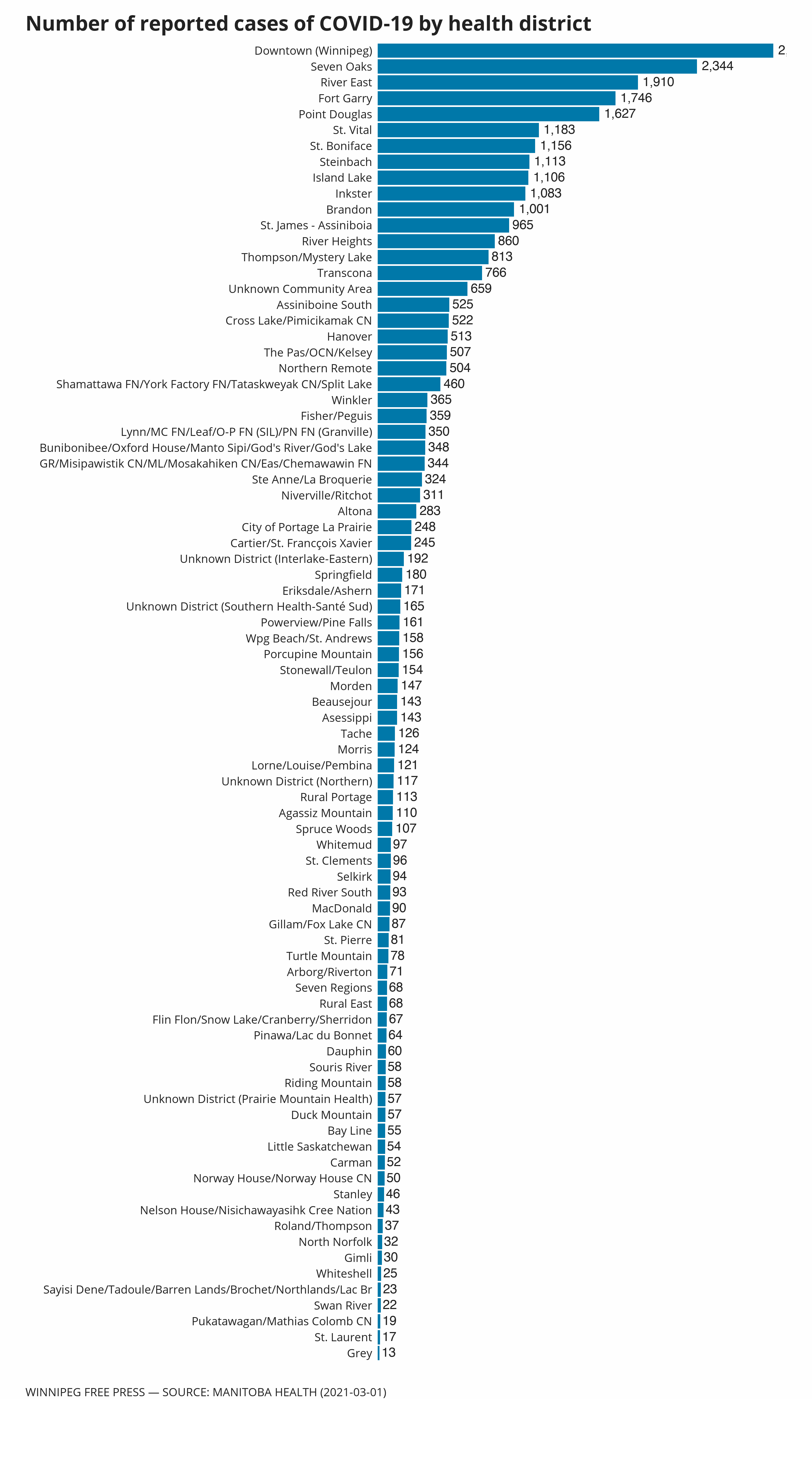 Brandon has the highest number of active cases at 80. Previously, the city's numbers were lumped in with the Prairie Mountain Health region data.

The Winnipeg health region serves two districts: the city (which includes the RMs of East and West St. Paul) and the faraway town of Churchill.

Thursday's numbers show 34 active cases in the region, with 32 in Winnipeg and two in an "unknown" district. Health officials did not confirm if those two cases are in Churchill.

There are no active cases reported in the Northern Health region, which does not include the town of Churchill.

"It's helping us provide Manitobans with a more narrow geographic view of where cases are being identified," chief provincial public health officer Dr. Brent Roussin said at a media briefing.

On Monday, Health Minister Cameron Friesen promised Manitobans more precise geographic information on new COVID-19 cases would be rolled out by the end of the week.

On Thursday, the province's online novel coronavirus online "dashboard" now shows how many cases are in each of the five health regions and the 68 districts that comprise them: 13 in Prairie Mountain, 24 in Southern Health, 14 in Interlake-Eastern, 15 in Northern Health, and two in the Winnipeg region.

However, the information is not enough to single out a specific community or neighbourhood. Officials don't want a place to suffer stigma, which Roussin said is "our enemy" in fighting the spread of the virus.

"These areas are made up of multiple communities and municipalities," Roussin said. "Winnipeg and Brandon will continue to be reported by the whole community. Breaking down those numbers more specifically isn't going to help the public health efforts."

Manitobans shouldn't let their guard down if they don't see any COVID-19 cases listed in their district, Roussin said. People need to continue washing their hands, keeping their distance, and, if they have even mild symptoms, getting tested right away and isolating at home, he said.

Active cases at a glance

There are 218 active cases of COVID-19 in Manitoba.

The regional and district breakdowns

There are 218 active cases of COVID-19 in Manitoba.

The regional and district breakdowns:

The two districts for the Winnipeg region are Winnipeg and Churchill, as Churchill is served by the Winnipeg Regional Health Authority. Health officials would not confirm Thursday the two "unknown" cases are in Churchill.

Included in the breakdown of the districts is an "unknown" category. Shared Health said it is used when the identifying information does not allow the individual to be assigned to a district geography. The regional health authority is still recorded but the case is assigned to the unknown district while investigation works to resolve the location and assign it correctly.

"We're providing this information to provide increased clarity to Manitobans to see where cases are being identified but we don't want Manitobans to ease up on the fundamentals in areas that may right now not be showing cases."

Of the 25 new cases reported Thursday, 12 are in Prairie Mountain and linked to previously announced cases in Brandon. The southwest Manitoba city's active total rose to 80.

Of those, 35 are employees at the Maple Leaf Foods Inc. plant, company spokeswoman Janet Riley said. Another 165 workers tested negative for COVID-19 as of Wednesday night, she said.

There is still no evidence the virus is being spread in the workplace that employs more than 2,000, Riley said. To help prevent community transmission, Maple Leaf is planning to distribute 500,000 face masks to the residents of Brandon, she said.

Seven new cases reported in the Winnipeg region are related to travel and close contacts, Roussin said. Case investigations are ongoing and when they are completed, additional information will be provided as needed to inform of any public health risks.

Six new cases are in Southern Health, but no further details were provided.

"These COVID numbers are reminding us COVID is not done with us," said Roussin. "We know Manitobans are concerned with the increased numbers" and they know how to drive them back down and flatten the curve.

"We have never been helpless against this virus."

Time to hit the road

A shrewd choice, but Harris has much to prove