Exuberant Manitobans get behind Canadian team at MTS Centre

They pulled on their red and white jerseys in Transcona. Out in Charleswood they got into the face paint. Over in St. James they drew up Go Canada Go signs. They drove in from Oakbank and Ste. Anne singing our national anthem.

They pulled on their red and white jerseys in Transcona. Out in Charleswood they got into the face paint. Over in St. James they drew up Go Canada Go signs. They drove in from Oakbank and Ste. Anne singing our national anthem.

Canada had a team playing for international hockey gold Tuesday night and in typical Manitoba fashion our fans made sure the players knew the province and country had their backs.

Team Ontario rode the crest of a record-setting 12,060 fans at the MTS Centre to a 5-3 win over Team USA for gold at the 2011 World Under-17 Hockey Challenge.

Brampton’s Sean Monahan scored two goals, including the winner, to give his province its eighth title in tournament history. Monahan got hot in the semifinal round scoring a pair of goals and carried that right into the final.

“The stage was bigger (Tuesday night) and you have to rise up to it,” said Monahan. “Our team came through and I got some lucky bounces. It was so exciting to see how big the crowd was and to have them all rooting for us. Any time you get to wear the Maple Leaf on your chest it’s an honour, but to do it in your homeland it’s even better.”

The crowd was the largest to watch a single game in tournament history and they weren’t disappointed with the effort or the result.

With the score tied 3-3 midway through the third period, Monahan laid claim on gold with a snap shot high into the mesh. The lanky winger from the OHL’s Ottawa 67s zipped into the slot and shrugged off a check before zipping his shot into the net and giving the crowd a chance to take a breath.

With fresh steam the fans let loose down the stretch, cheering their newest set of gold-medal wearing heroes. The players on the ice were billed as the stars but the crowd in the stands played scene stealer on a number of occasions.

Late in the third period Team Ontario’s Matthew Campagna scored on a penalty shot with a filthy deke that left USA goalie Jared Rutledge played out and defeated. As Campagna raced to centre ice for a teammate mobbing, the house exploded, sending a shiver down the spine of this hockey nation.

“The coach picked me to shoot. I’ve tried that move 1,000 times in practice and I decided to go with it,” said Mississauga’s Campagna. “After I scored, I couldn’t believe the atmosphere. We couldn’t hear each other on the bench. It was awesome to win gold for Canada, right in Canada.”

Both teams advanced to the championship with perfect 5-0 records and the U.S. was touted as the favourite. But Team Ontario stormed out of the gate and used a physical style to hammer away at the U.S.

Ontario led 3-1 after the first period with goals from Kerby Rychel, Monahan and Brendan Gaunce.

Ryan Hartman scored USA’s only first-period goal but a second-frame marker from Miles Koules and a goal early in the third from Patrick Sieloff evened the ledger at 3-3.

Earlier in the day Team Pacific captured bronze with a 5-4 overtime win against Team Quebec. 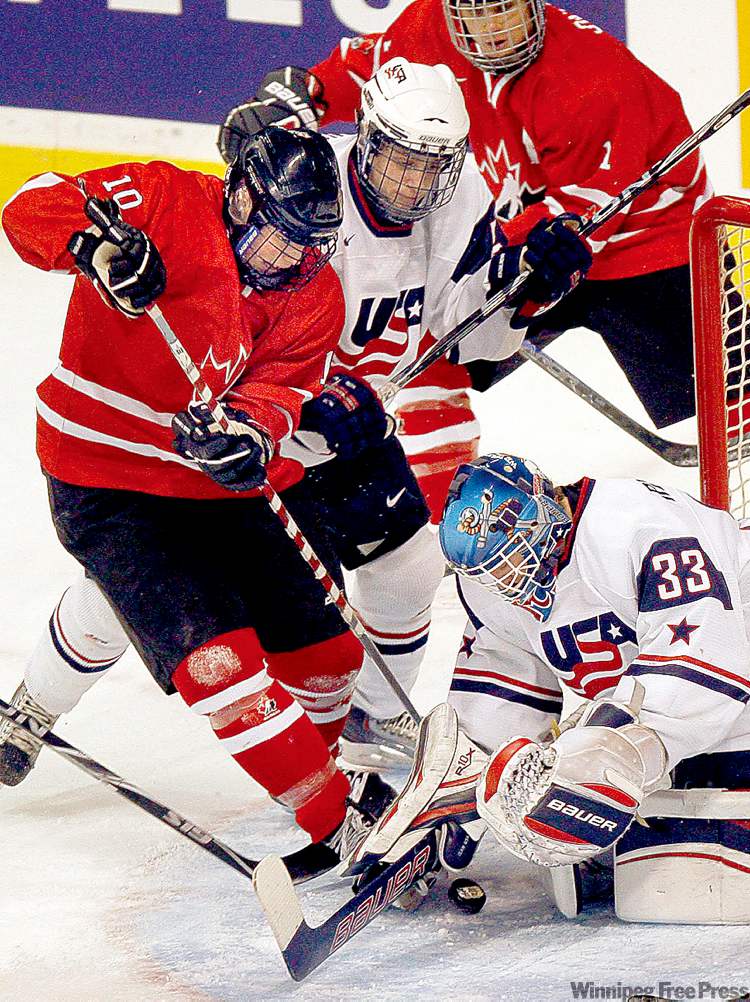