Devi Sharma will be acclaimed in Old Kildonan

Incumbent Devi Sharma was the only candidate nominated to run for city council in the Old Kildonan ward, so she will be acclaimed on Oct. 26, civic election day. 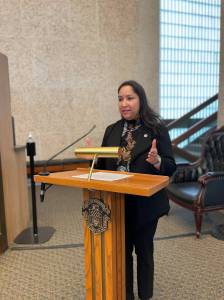 Sharma has represented Old Kildonan ward for three terms. Since being first elected, she has served as the first female speaker of council, is governance committee chairperson and sits on the Lord Selkirk – West Kildonan community committee. She is also a committee member for infrastructure renewal and public works and is on the City of Winnipeg access advisory committee.

“When I first put my name forward, I was approached by many people living in the community who had known me through my volunteer service on community centre boards and through schools and the Seven Oaks Hospital board,” said Sharma, who has lived in the ward for over 30 years. “It was nice to have that community support from the onset, and my internal desire was to create a thriving and vibrant community.”

“I’ve worked alongside community residents in Old Kildonan, and part of being successful at city hall is collaborating in a positive manner and having good relations with other city councillors,” Sharma said. “You have to work with your colleagues in order to bring things forward and be successful, and I think I have that proven track record.”