When I read last week that Canadian actor Paul Soles had died, at age 90, I had a hazy recollection of his role as “The Lawbreaker” on the quintessentially 1970s CBC panel show This is the Law.

When I read last week that Canadian actor Paul Soles had died, at age 90, I had a hazy recollection of his role as “The Lawbreaker” on the quintessentially 1970s CBC panel show This is the Law.

I had no idea until I read his obituary that the versatile Soles was also the voice of Peter Parker and his web-slinging alter ego Spider-Man in the original 1967 animated series.

That show was repeated in an endless after-school syndication loop during my childhood, and those memories are intense. Super-intense. In fact, I had images in my head that were so bizarre I wondered if they could possibly be true.

Rewatching some episodes from Spider-Man’s three-season (1967-70) run — and sourcing obscure old cartoons is what YouTube is made for — I’m gobsmacked by just how wildly, wonderfully weird the series was.

There is the no-budget animation, the loopy dream-logic storylines. There are the whirling, vibrating vortices. (In one episode, a villain mesmerizes the entire city of New York using Op Art.)

As with other trippy kids’ TV shows, like H.R. Pufnstuf and The Banana Splits Adventure Hour, Spider-Man was picked up by later generations of stoners. More recently, the original screen webslinger has been claimed by internet meme culture, with the “Spider-Man pointing at Spider-Man” image becoming a handy visual marker for our confused and conflicted era.

So, how does it feel to watch Spider-Man ’67 now? At a time in which technologically complex, hugely expensive animation is the norm, the show’s bargain-basement esthetic has a novel charm. This U.S.-Canada co-production succeeds not despite its cheapness but because of it. Since there’s not enough money to convincingly replicate objective reality, the animators just have a ball making their own crazy little worlds.

The first season was animated on a shoestring. (The spider logo on Spidey’s outfit only has six legs, which seems like an oversight for an arachnid-themed superhero.) The already low budget was slashed even more in the two final seasons, and the cost-cutting measures of new lead animator Ralph Bakshi (who went on to make underground and X-rated cartoons such as Fritz the Cat) included ignoring the canonical comic book Spider-Man villains — Dr. Octopus, Mysterio, Vulture — to avoid licensing fees.

Instead, the NYC-based Spider-Man battles a lot of generic green-skinned or blue-furred weirdos, either up in the sky, in strange subterranean cities or in some trancey transdimensional realm, because Bakshi was basically swiping whole sequences from Rocket Robin Hood, another Canadian production done on the cheap.

The look of the show is choppy and static, with much of the character animation reduced to moving mouths and occasionally blinking eyes. Mostly, the people in Spider-Man’s world stand stock-still even during outrageous alien invasions and mole-men irruptions.

Spider-Man ’67 is one of the first screen embodiments of the flawed and fallible superhero, a guy with exceptional powers but also a lot of everyday problems and a little bit of angst.

There is hypnotic repetition. Since the plots tend to be rudimentary, the animators usually eat up runtime with repeating scenes of Spider-Man swinging along the multihued skyscraper canyons of New York.

But this cheap and cheerful necessity yields some crazy beauty. The backgrounds are a revelation of expressionistic colour — chrome yellow, cobalt blue, tangerine, turquoise.

The skies — never blue — are bruised and brooding whorls of black and fuschia and lime. The eerily empty cityscapes, sculpted from light and shadow, feel like neon noir.

The series also sounds great. The iconic theme song has been covered by everyone from The Ramones to Michael Bublé, and the incidental music is cool — jazzy and percussive, with lots of groovy surf guitar.

Underneath the swell surfaces and kooky surrealism, though, there’s a genuine emotional anchor, and that’s down to the work of Paul Soles. His nifty vocal performance gives us Peter and Spidey as distinct sides of the same person — different but connected.

Peter was kind of earnest and nice, working after school to buy medicine for his Aunt May, while Spider-Man was cool and sardonic, occasionally breaking the fourth wall to talk straight to us. (Get that, Deadpool.)

Peter was overlooked by the football coach, friend-zoned by girls, berated by his irascible boss. But Spider-Man was also unappreciated — his fellow citizens could never decide if he was a hero or a crook — and often lonely.

Spider-Man ’67 is one of the first screen embodiments of the flawed and fallible superhero, a guy with exceptional powers but also a lot of everyday problems and a little bit of angst. We now take that trope for granted, but it was finding its way during the run of the original Spider-Man.

That’s maybe one of the strangest feelings that comes out of watching the series now: realizing that an under-recognized Canadian character actor and a nutty, no-budget cartoon show helped usher in what has become the ever-expanding, multibillion-dollar Marvel Cinematic Universe.

Winnipeg's Spider-Man has fun putting a smile on people's faces 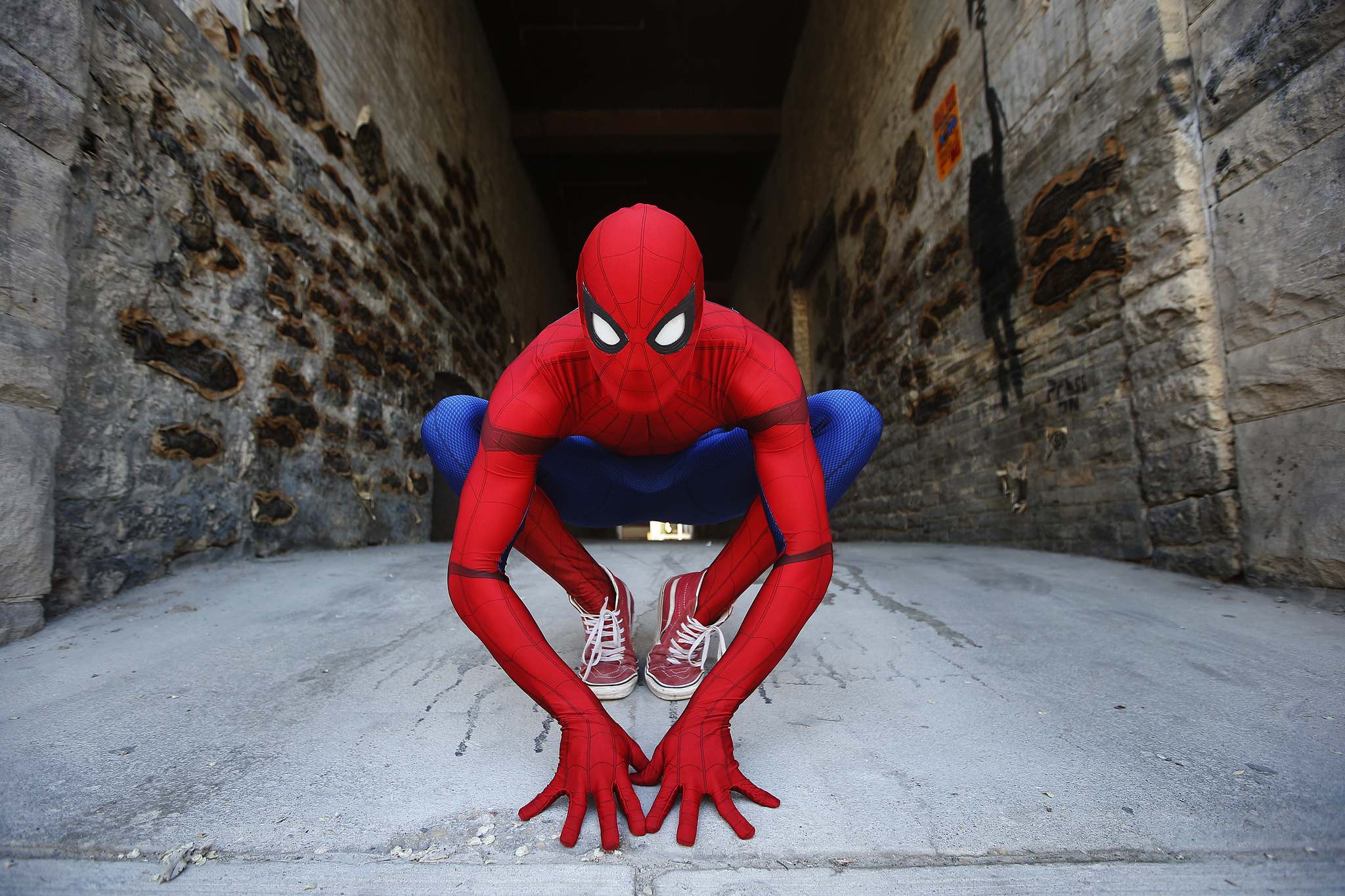