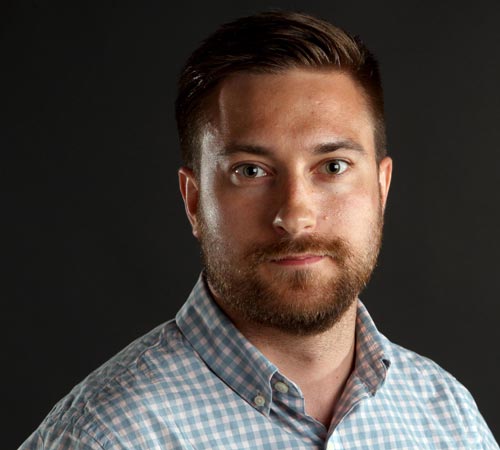 He packed his bags and headed to Ottawa, where he spent the next four years studying journalism at Carleton University. There, he discovered his love for all things media – and late night shawarma – though he prides himself on never writing a single article for the school’s newspaper.

Jeff got his first gig at CBC Ottawa during his fourth year at school, earning a national award for a radio documentary on his very first assignment. He eventually graduated and chose to leave a career in broadcasting for the city, girl and industry he loves (not necessarily in that order).

That summer Jeff joined the Winnipeg Free Press as winner of the Vince Leah sports internship, during which he covered all sports from golf to the Manitoba Marathon, to Goldeyes and the Bombers. He was in good hands right away, spending his first full week alongside legendary sportswriter Ed Tait, who had the daunting task of working the breaking news shift. It didn’t take long for Jeff to realize he’d like to make the Free Press his permanent home one day.

After his internship was up Jeff moved over to CBC Manitoba, where he spent the next three years doing a number of jobs including senior writer for the Winnipeg Jets. He’s currently halfway through his goal of covering a game in each of the 30 NHL rinks, with his favourite stops so far being Madison Square Garden in New York and the Bell Centre in Montreal.

Jeff would finally get his wish, joining the Winnipeg Free Press sports team, this time in a permanent role as a multimedia producer. He now spends his days researching and writing about local sports and building new and exciting projects online.

When he’s not on the clock, you can find Jeff googling the latest software, watching Netflix or at a garage sale on the weekends, where he’s become obsessed with picking and refinishing wood furniture, most notably the two oak library desks in his office.

Five players the Bombers should chat up during legal-tampering period

Five players the Bombers should chat up during legal-tampering period

The Winnipeg Blue Bombers have mere hours remaining to give their best sales pitch to pending free agents before both sides get their chance to peak behind the curtain and see what else might be out there.

After a year in the wilderness with the Edmonton Elks, might wide receiver Kenny Lawler find his way back to donning the blue and gold? (Jason Franson / Canadian Press files) 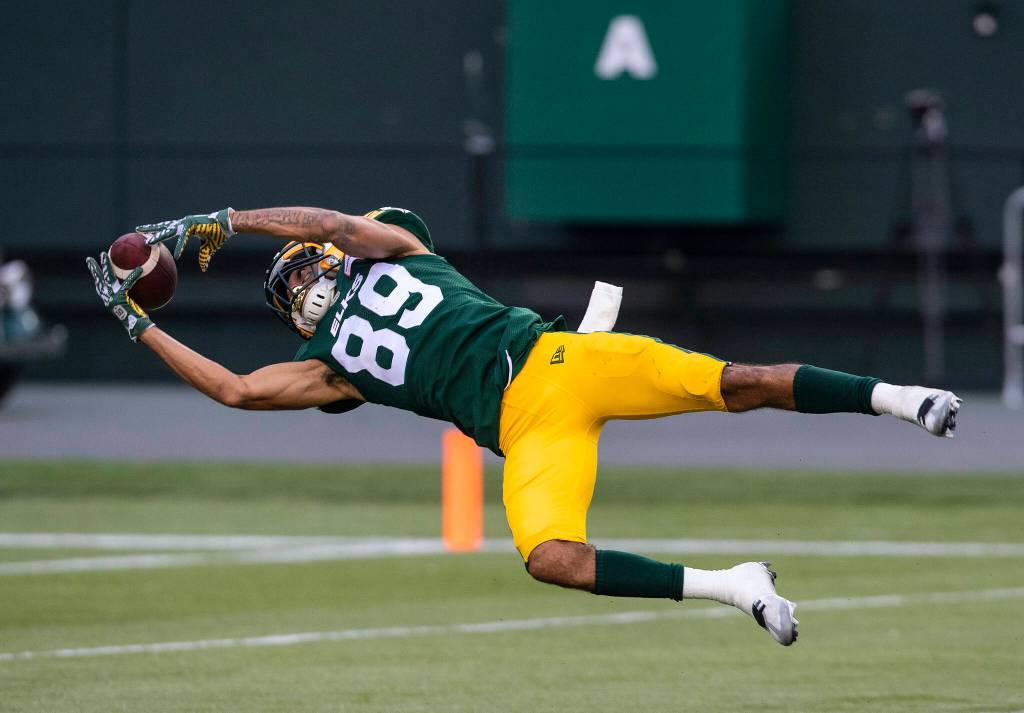 Joe Wiwchar has spent a majority of his 87 years helping grow the game of baseball in Manitoba and across the country, an illustrious journey that began in 1953 and continues to this day.

Joe Wiwchar with memorabilia from the Manitoba Baseball Hall Of Fame. 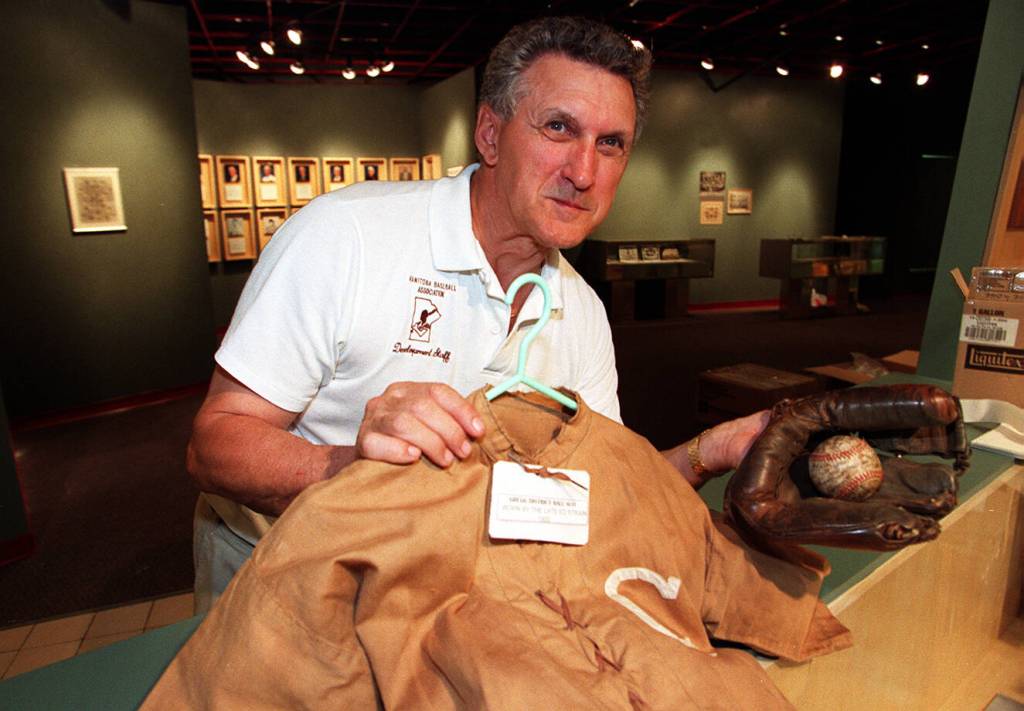 With just two weeks before the start of free agency on Feb. 14, we’ve reached the calm before the inevitable storm for front offices across the CFL. 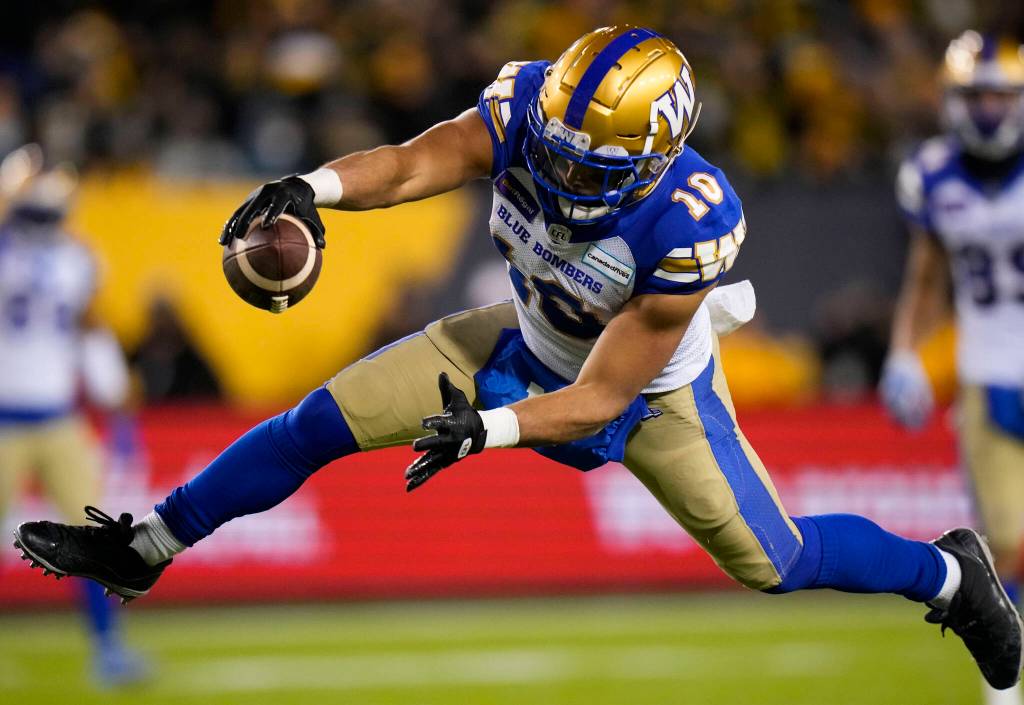 Jets rally in the third period to beat Blues 4-2

Jets rally in the third period to beat Blues 4-2

For the better part of Monday night it felt as if the Winnipeg Jets were digging themselves a deeper hole, destined to add another loss to what’s been the roughest week so far in their 82-game schedule. 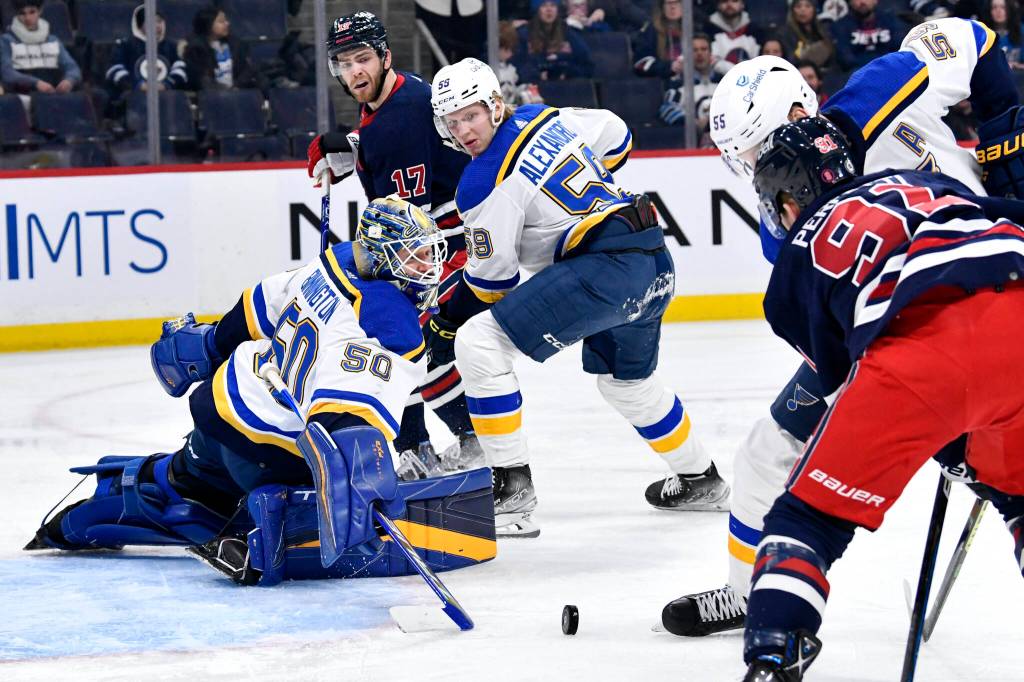 NASHVILLE — It was the longest stretch away from home for the Winnipeg Jets in their 82-game regular season.

Cole Perfetti appears to have found a spot playing on a line with Pierre-Luc Dubois and Kyle Connor. (Mark Zaleski / The Associated Press) 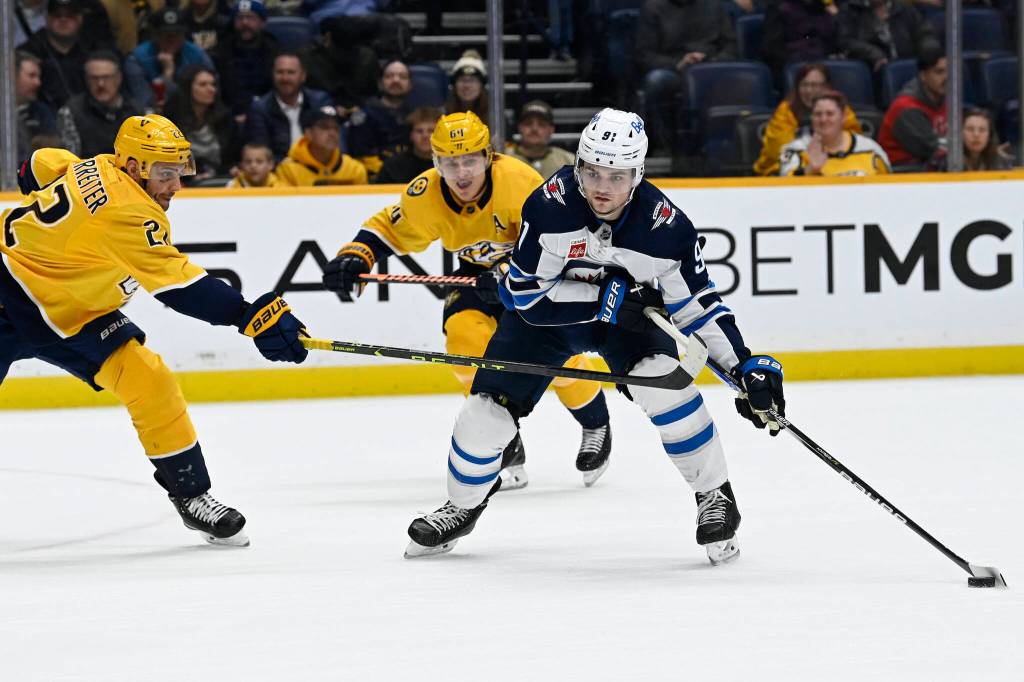 NASHVILLE — Playing their final game of a long road trip, the Winnipeg Jets put forth a valiant effort against a Nashville Predators team desperate to get back into the playoff picture.

Tanner Jeannot scored the game-winning goal with a wraparound 5:38 into the third period. (Mark Zaleski / The Associated Press) 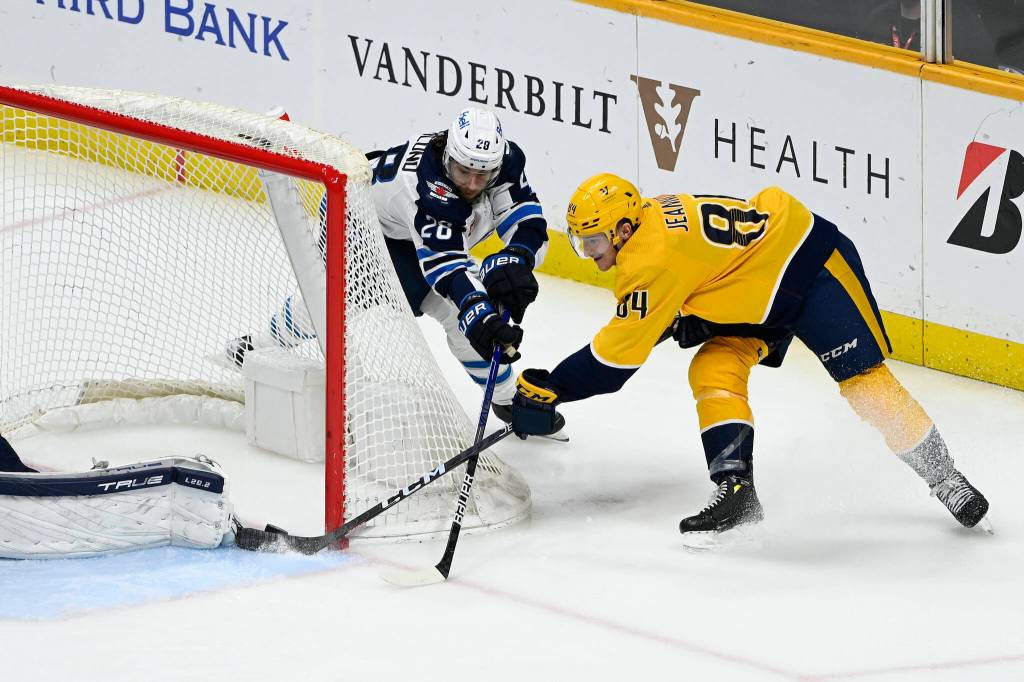 Glass coming into his own with Predators

Glass coming into his own with Predators

Cody Glass was overwhelmed last fall when given the news he had made the Nashville Predators out of training camp. 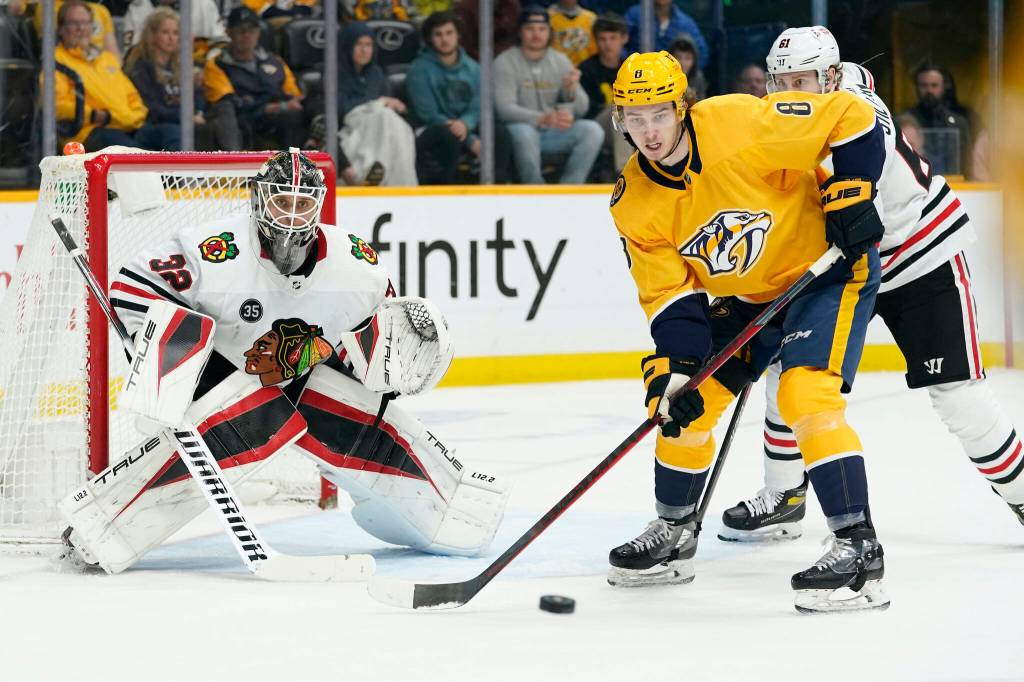 NASHVILLE — When Scott Arniel was hired as an associate coach for the Winnipeg Jets, he came in with a list of priorities he felt could take his new team to a new level. 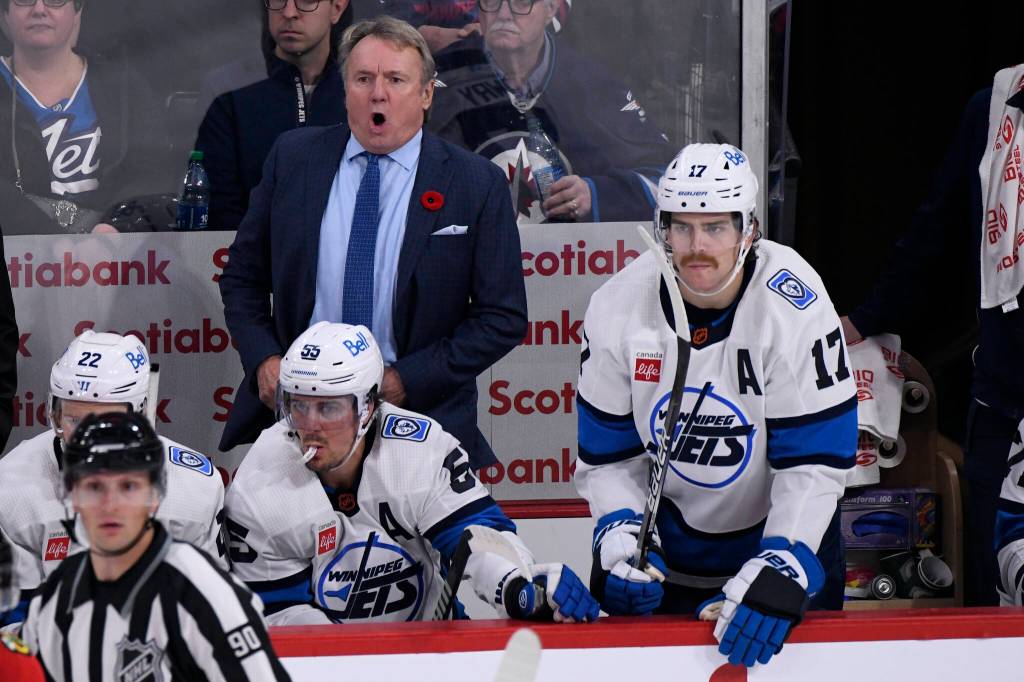 Jets’ attack too much for Philly

Jets’ attack too much for Philly

PHILADELPHIA — At first blush, it looked as though the Winnipeg Jets were going to have their way with the Philadelphia Flyers. Then the final 40 minutes played out, turning the game into a roller-coaster affair that went down to the dying moments. 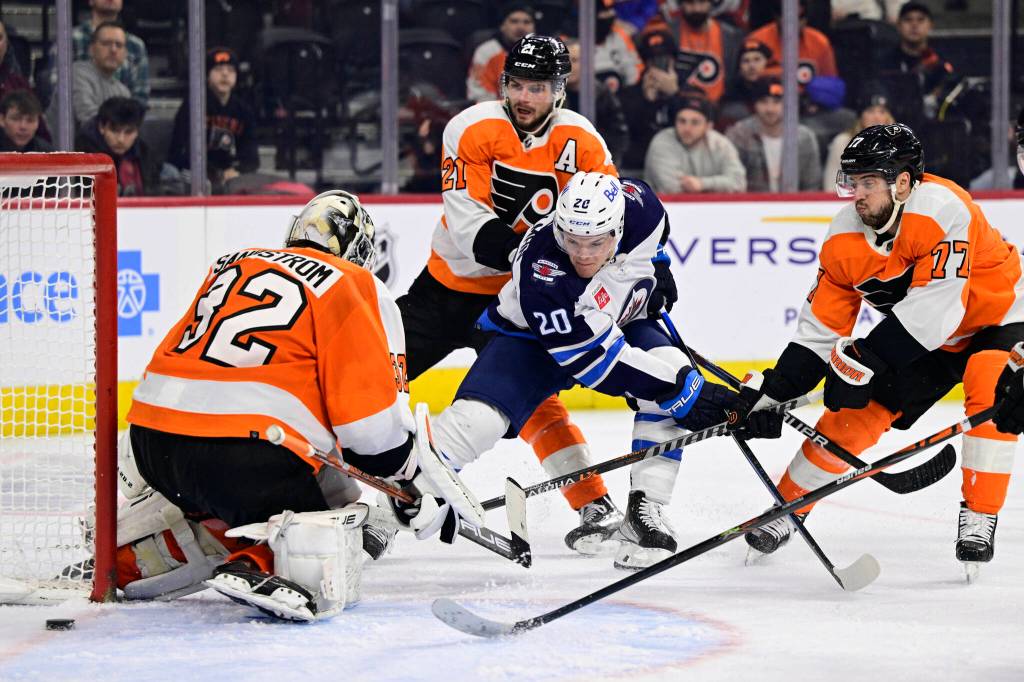 Carman’s Wade Allison has travelled a rough road, now he looks like a keeper for the Flyers

Carman’s Wade Allison has travelled a rough road, now he looks like a keeper for the Flyers

PHILADELPHIA — It hasn’t been a smooth road to the NHL for Wade Allison. 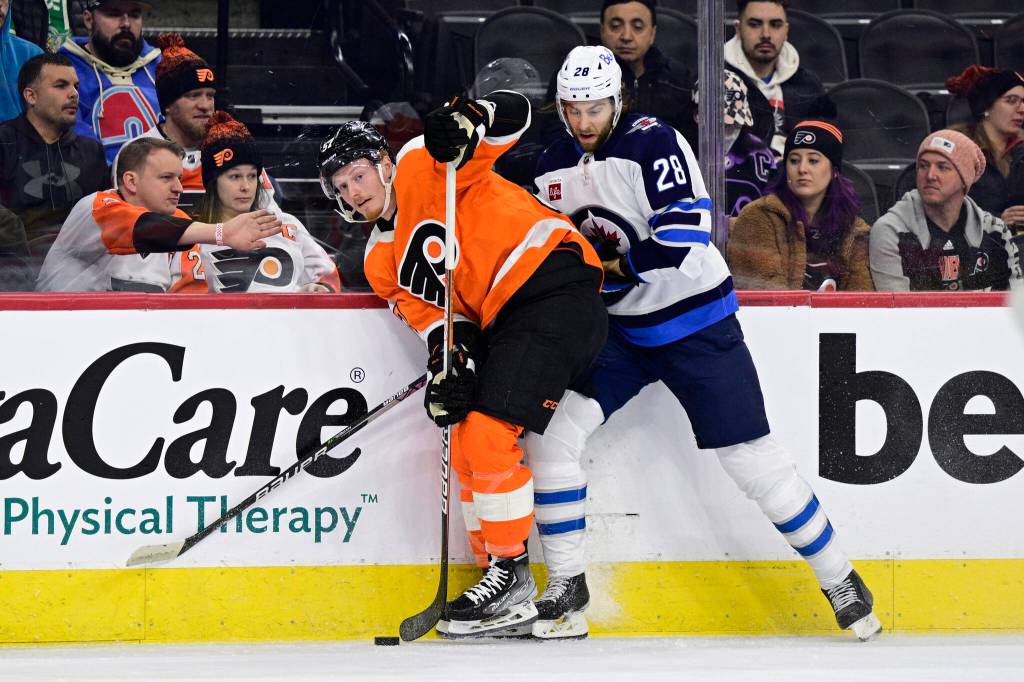 Jets back on track with ‘W’ in Ottawa

Jets back on track with ‘W’ in Ottawa

OTTAWA — It took a little bit to get their engines running at full speed, but the Winnipeg Jets eventually got back on track, earning a convincing 5-1 win over the Ottawa Senators at Canadian Tire Centre Saturday night. 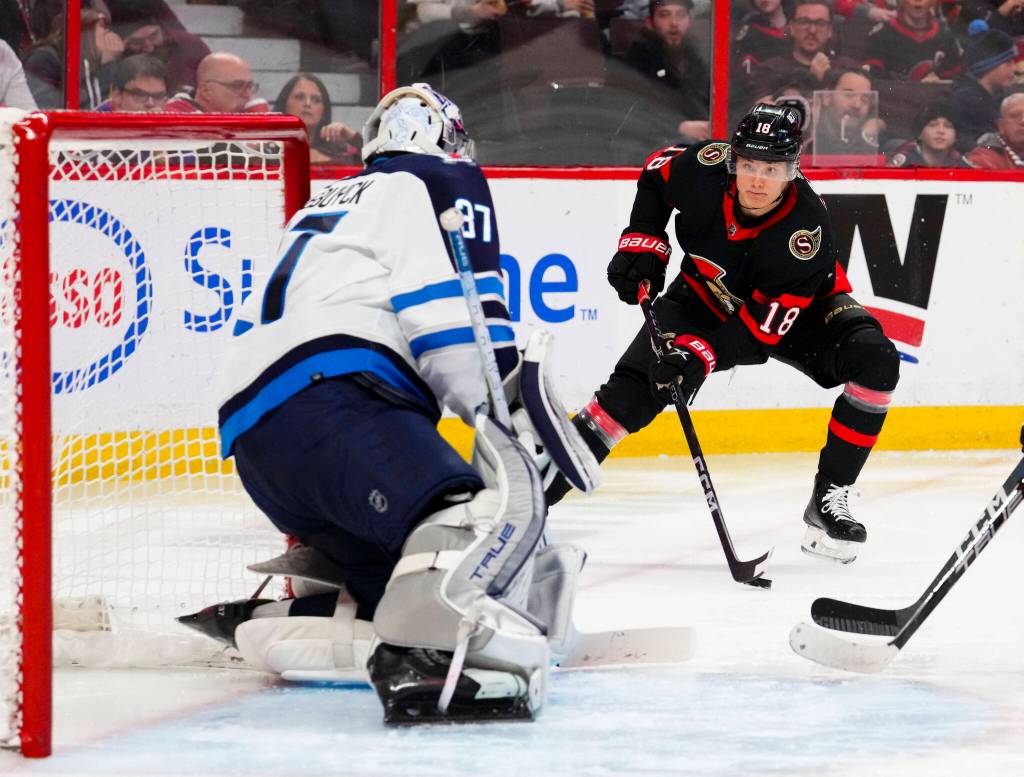 Jets not so mighty when they go east

Jets not so mighty when they go east

OTTAWA – While all victories count for the same two points in the standings, not all wins are equal. 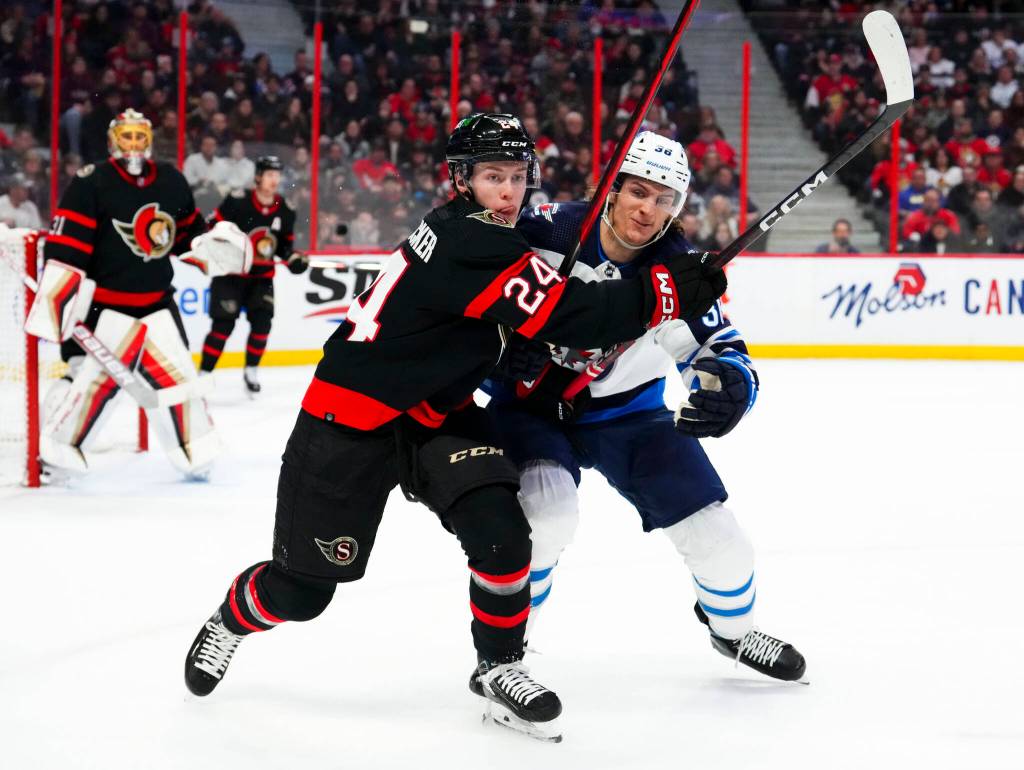 OTTAWA — The ink had barely dried on Rick Bowness’s contract as head coach of the Winnipeg Jets when a random resume crossed his desk. 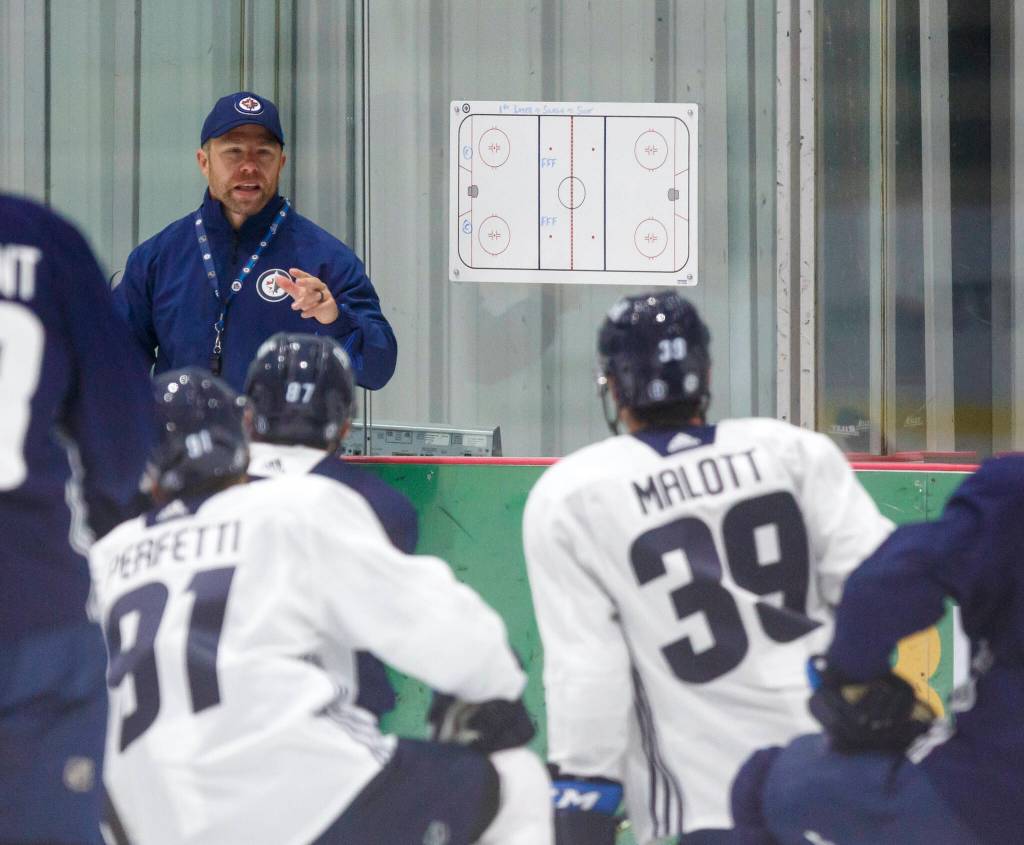 TORONTO — The Winnipeg Jets spent much of Wednesday’s media availability lamenting their recent play, specifically the last five games. One day later, they can add a sixth to the list.

Mitch Marner scores short-handed in the second period to put Toronto up 3-0 on the way to a 4-1 win over Winnipeg. (Nathan Denette / The Canadian Press) 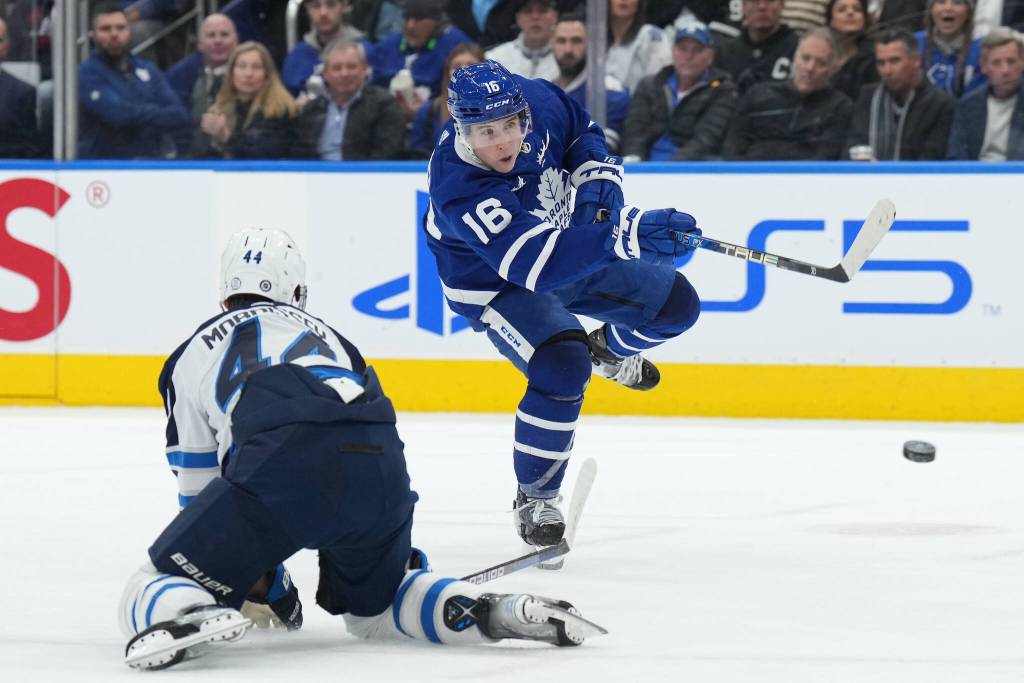 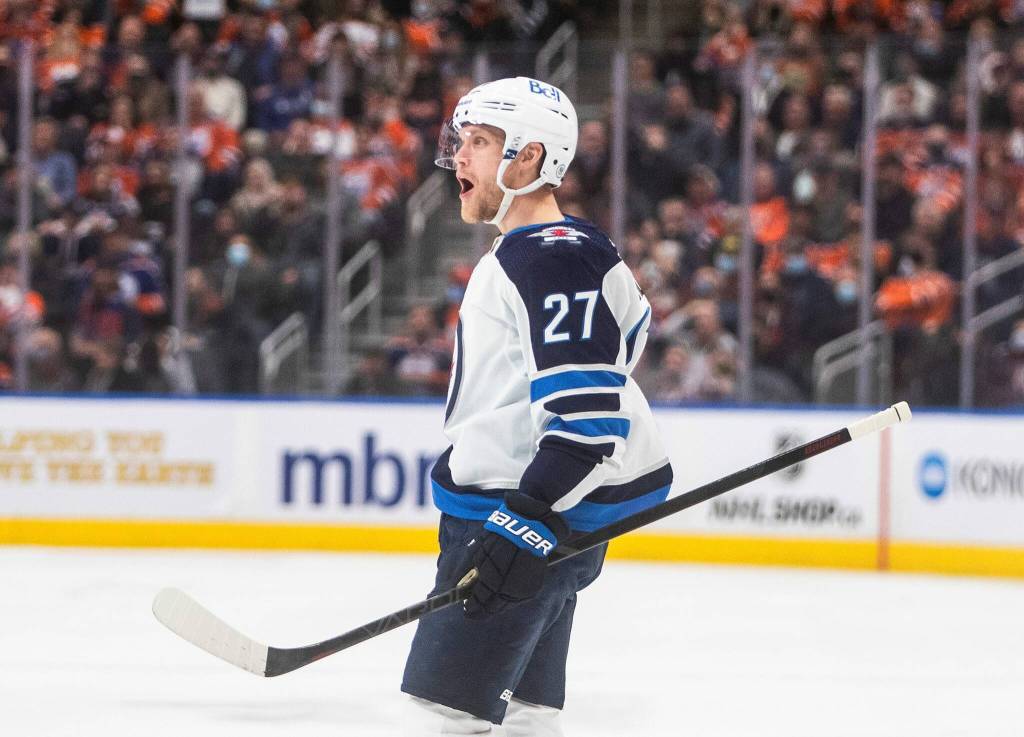 TORONTO — The NHL suffered another black eye to its brand this week, when Philadelphia Flyers defenceman Ivan Provorov opted not to participate in a pre-game warmup that involved players wearing Pride-theme jerseys, along with rainbow Pride stick tape, in celebration and support of the LGBTTQ+ community Tuesday night. 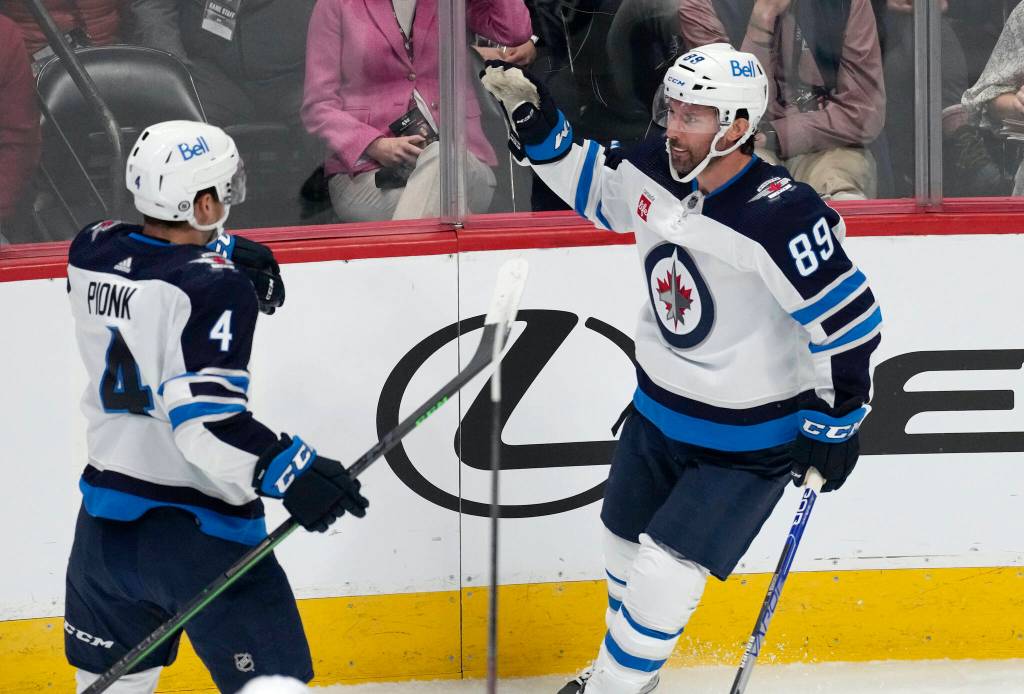 Bowness brings out the blender

Bowness brings out the blender

TORONTO — The Winnipeg Jets woke up Wednesday morning one of the NHL’s top teams. Heading into the night’s slate of games, the Jets were tied for first place in the Western Conference, boasting an overall record of 29-15-1, with victories in eight of their last 10.

Jets head coach Rick Bowness has talked a lot this week about his club needing to be better in all areas of the ice, to better play within his system, one that is built on being the aggressor. 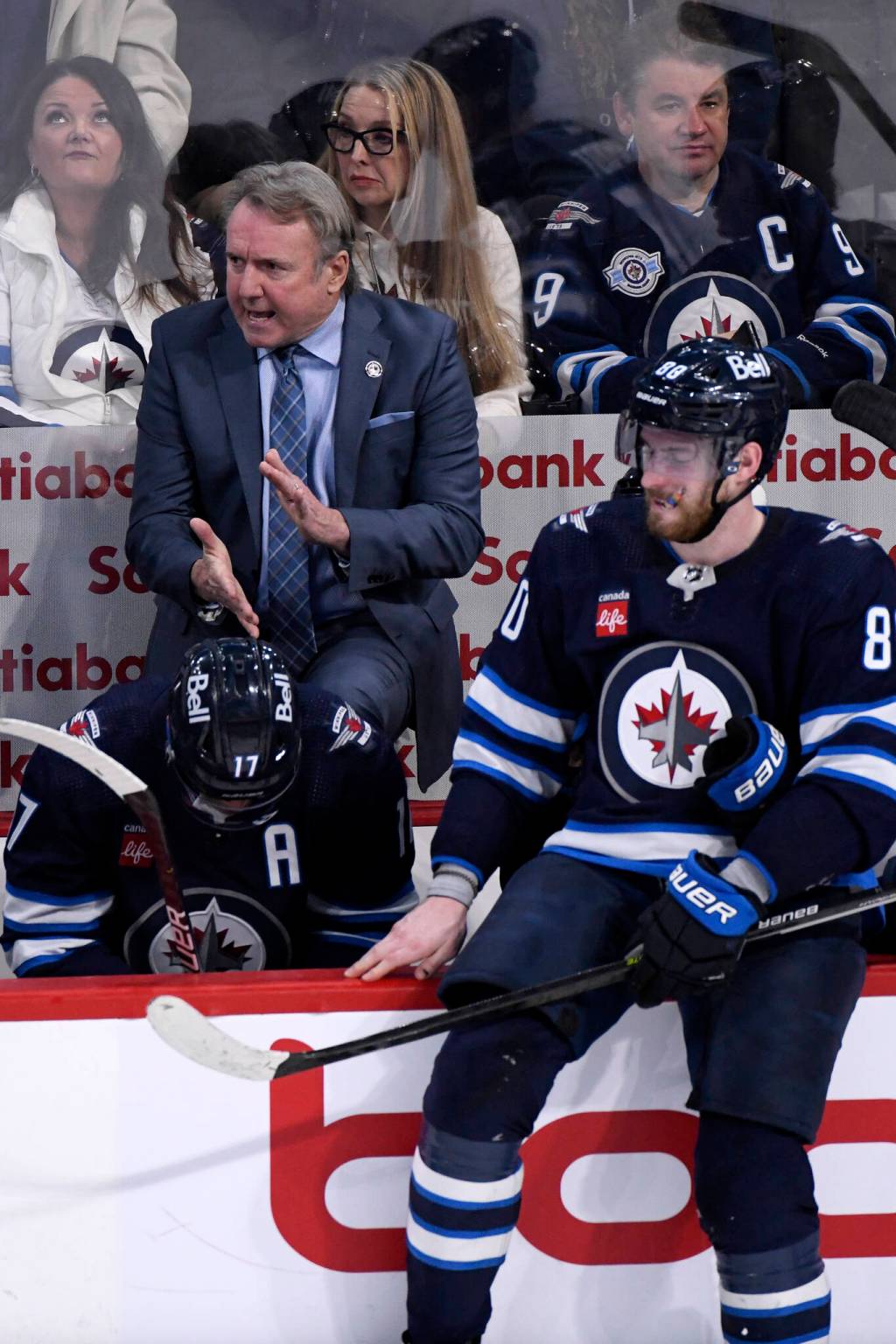 MONTREAL – The Winnipeg Jets have put forth several quality efforts this season, rightfully earning their position atop the Western Conference. Tuesday, however, was not one of those games.

Josh Anderson made it 4-1 for Montreal in the third, ending any chance of a Winnipeg comeback. (Graham Hughes / The Canadian Press) 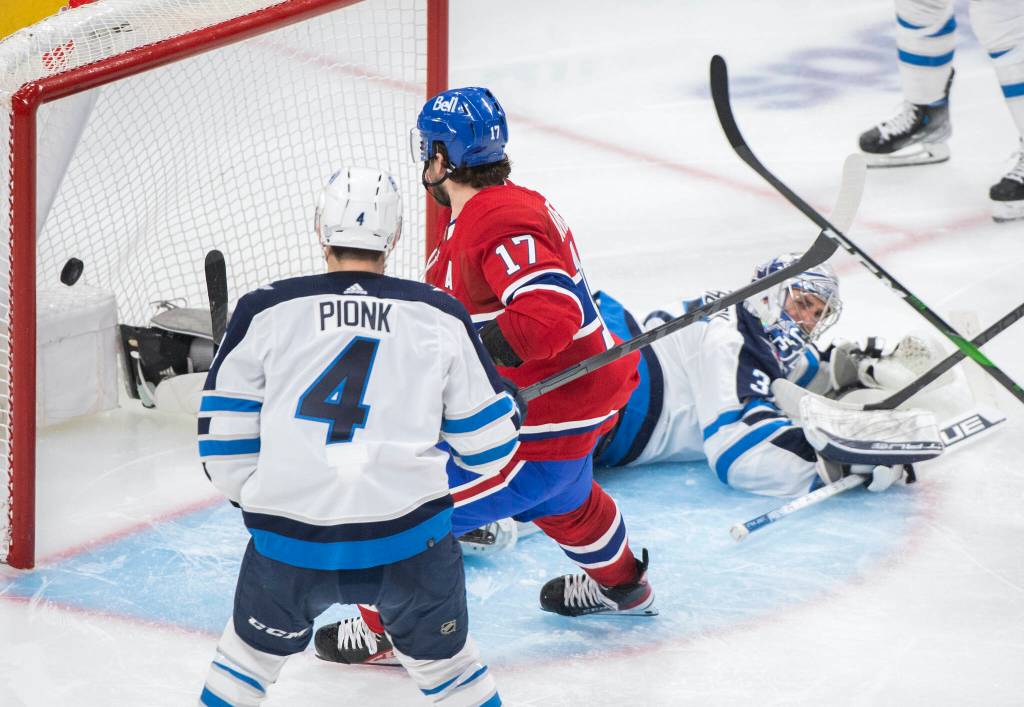 Dubois taking things one season at a time

Dubois taking things one season at a time

MONTREAL — The Winnipeg Jets had a near-full locker room Tuesday morning at Bell Centre, but Pierre-Luc Dubois garnered most of the attention.

The fact that Winnipeg Jets left wing Pierre-Luc Dubois is deepening his roots in Montreal also added to the fears his time in Winnipeg might end by the summer of 2024, when he’s eligible to become an unrestricted free agent. 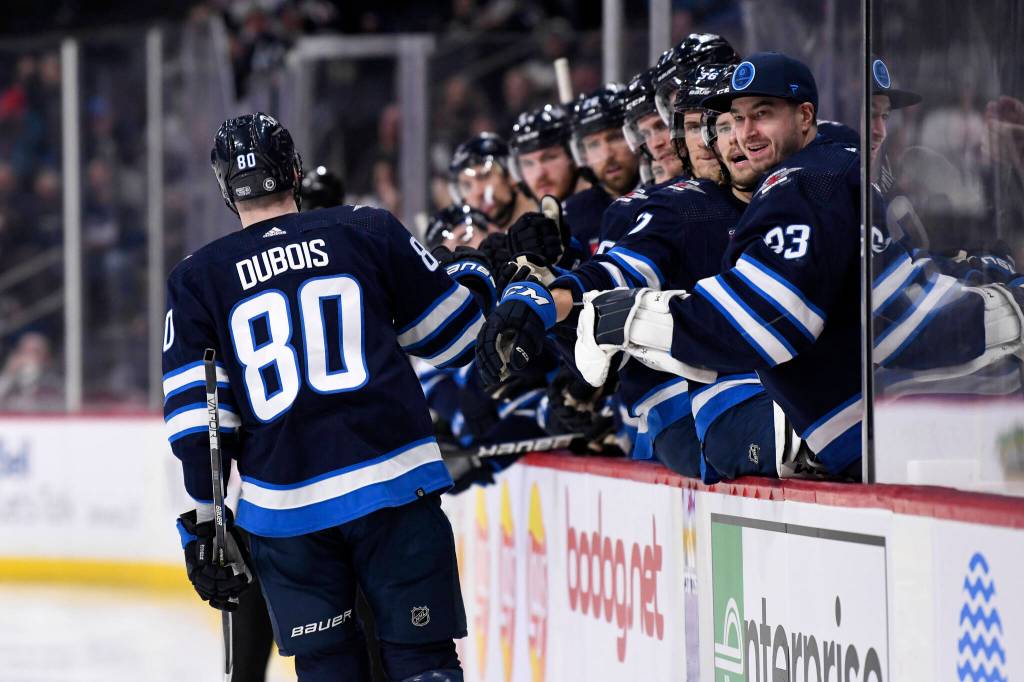 Dubois gives back to community

Dubois gives back to community

The Pierre-Luc Dubois Foundation’s golf tournament raises money to help children who otherwise might not be able to afford to play hockey take part in the game. 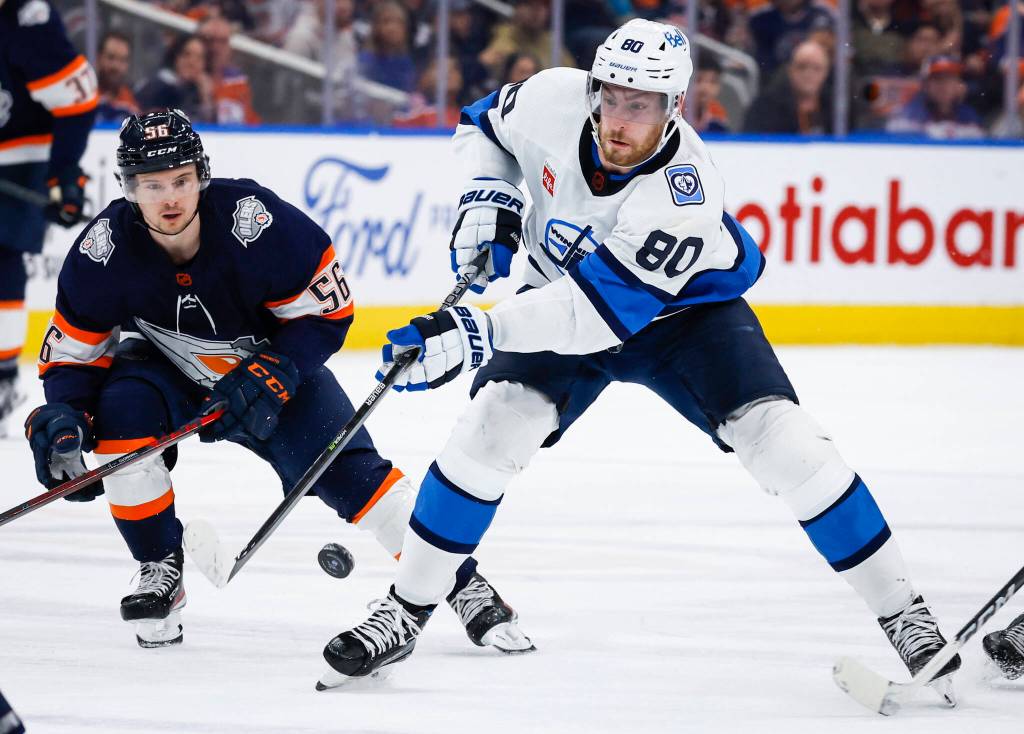 QB Nathan Rourke has signed a deal with the Jacksonville Jaguars after a stellar season in the CFL. 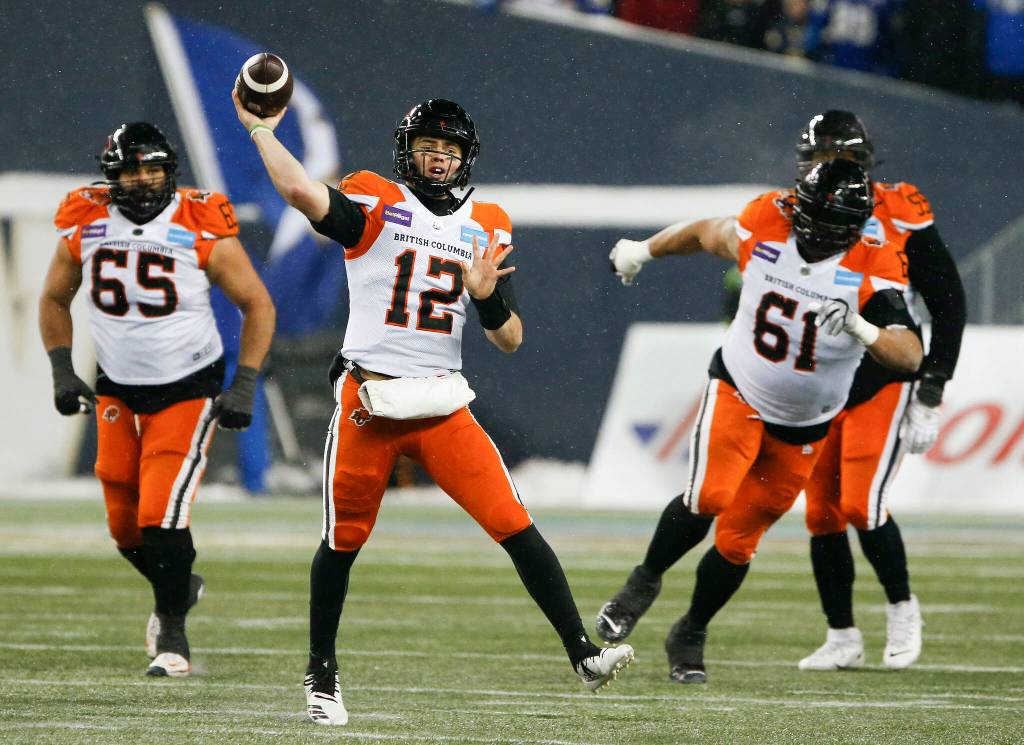 WASHINGTON – The Washington Capitals played the role of Grinch, stealing two points from the Winnipeg Jets in their final game before the Christmas break. 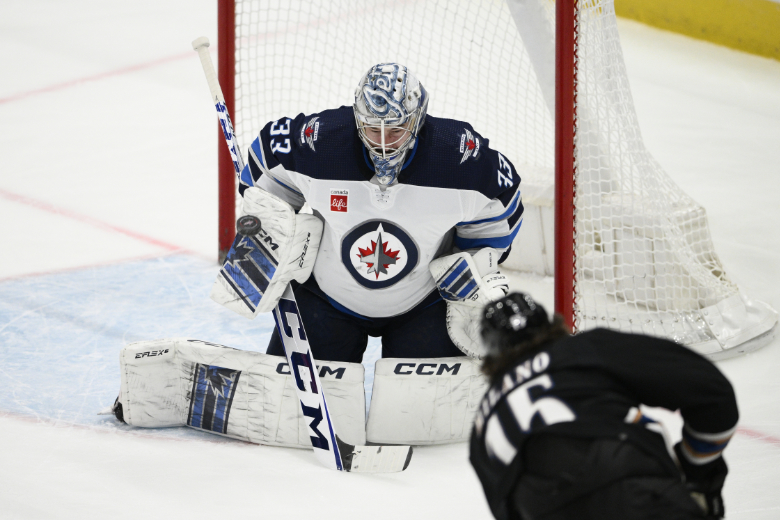 Arniel happy to be back in River City

Arniel happy to be back in River City

WASHINGTON — There’s been a lot of talk about Rick Bowness and the impact he’s had on the Winnipeg Jets. That’s going to happen when you’re the head coach and in the first few months on the job you take a team that missed the playoffs by 10 points and turn them into a one of the NHL’s top clubs. 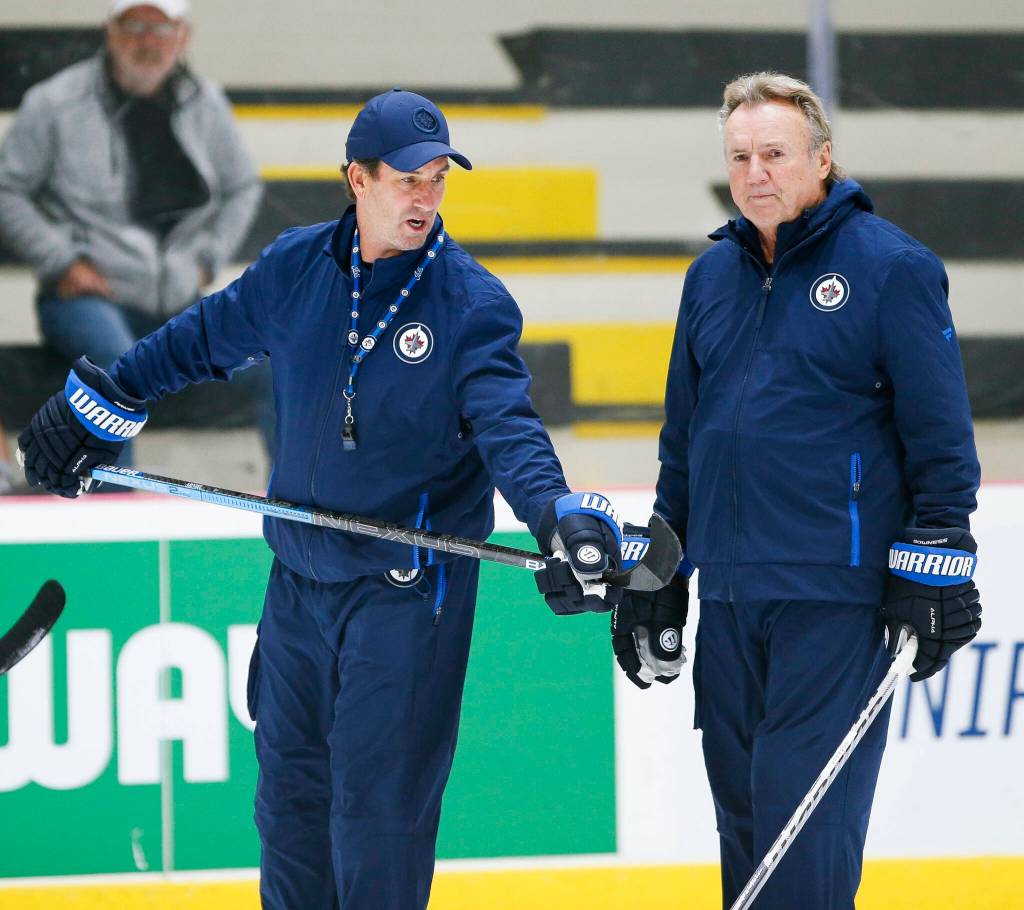 BOSTON – The Winnipeg Jets have proven capable of hanging with the NHL’s heavy hitters. The Jets entered Thursday’s road game against the Boston Bruins first in the Western Conference, at least when it comes to winning percentage, and have been near or atop the Central Division for much of their 32 games this year.

Boston goaltender Jeremy Swayman watches the puck after making a save as Jake DeBrusk crashes into the goal next to Jets’ center Cole Perfetti during the third period. (Mary Schwalm / The Associated Press) 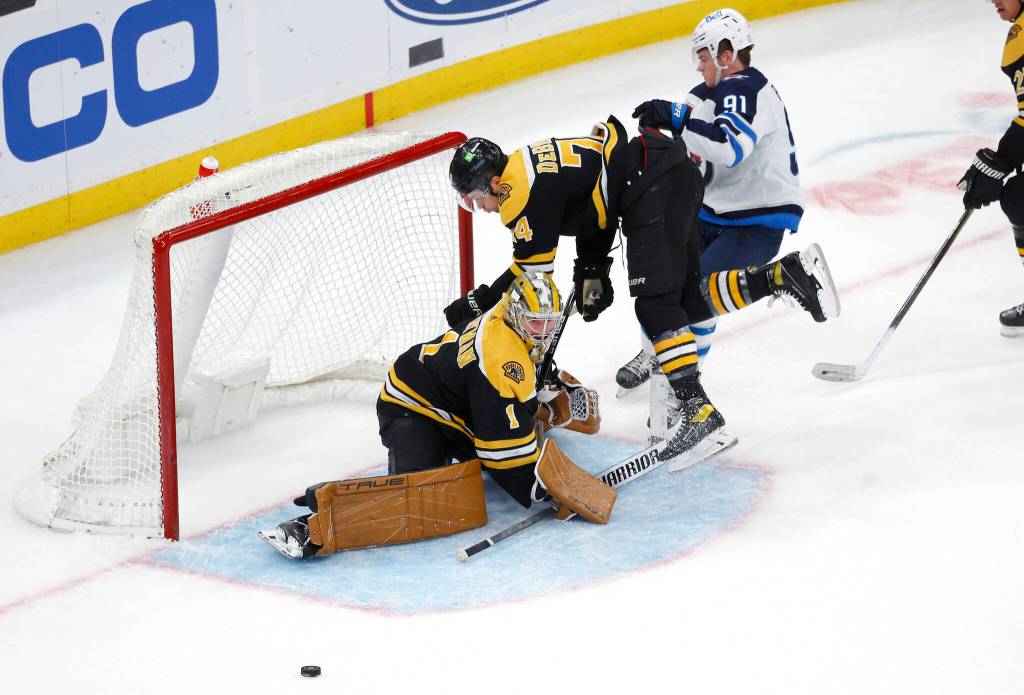