More than 40 people are recovering after carbon monoxide levels 10 times higher than what is safe were detected at the Super 8 hotel on Portage Avenue.

More than 40 people are recovering after carbon monoxide levels 10 times higher than what is safe were detected at the Super 8 hotel on Portage Avenue.

The building was evacuated of its 52 occupants and one dog, officials said.

"They were transported critical based on that reading and other symptoms, such as nausea, vomiting, shortness of breath, a decrease in level consciousness," he said.

Tuesday's mass carbon monoxide poisoning at a city motel had officials issue a warning to the public. Carbon-monoxide detectors and proper maintenance of heating and ventilation systems are essential because the poisonous gas is odourless and tasteless.

Carbon-monoxide detectors have been mandatory in Manitoba hotels, schools, hospitals, care homes, recreation centres, restaurants with dwellings attached and other public buildings for the past eight years.

Since then, there has been only one reported carbon-monoxide death in the province: in December 2016, a man died in his St. Boniface office building after a chimney vent cover collapsed.

But there have been several close calls in the province in recent years, and Tuesday's mass carbon monoxide poisoning at a city motel had officials issue a warning to the public.

Carbon-monoxide detectors and proper maintenance of heating and ventilation systems are essential because the poisonous gas is odourless and tasteless.

Homeowners are advised to install at least one carbon monoxide detector, and one for each level of a multi-storey residence, especially in sleeping areas or near heaters.

Basic models cost about $30 and should be replaced at least every 10 years, according to manufacturers' instructions. The alarms should be tested and batteries replaced consistently.

Since carbon-monoxide buildup happens when fuel-burning equipment is left running without enough oxygen in the atmosphere, Manitoba Hydro recommends having a licensed professional check and clean heating systems every year. They warn against using portable heaters or generators inside homes or garages.

Manitoba's current regulations requiring carbon monoxide detectors in certain types of buildings came into effect in 2011, a few months after high levels of the gas set off a detector at a Winnipeg daycare, sending 54 children and staff to hospital.

In 2016, high levels in a Brandon home initially went undetected despite having a monitoring device installed. The alarm didn't go off until after a family member called the fire department, they told the Brandon Sun.

A year later, a Winnipeg family was rushed to hospital after a gas generator caused a carbon monoxide leak in their home.

Tuesday afternoon, the Winnipeg Regional Health Authority confirmed it appears everyone will pull through. A few people remained under supervision in hospital, officials said.

Justin Schinkel, owner of the Super 8, said he expected to have more information about what caused the incident on Wednesday.

"It's the worst imaginable feeling, all of a sudden, something bad like this happens, you don't know the extent of it," Schinkel said. "We're just super happy that the first responders are so helpful and they've been able to get here so quick and help us out here."

One hotel worker remained in hospital Tuesday afternoon receiving oxygen, according to her father, Ken St. George, in a post on Facebook.

"Our daughter works there ... she is on continuous oxygen at the Grace, and is stabilizing ... thank God," he wrote in a post on Facebook. "Hope all staff and patrons come out of this whole." 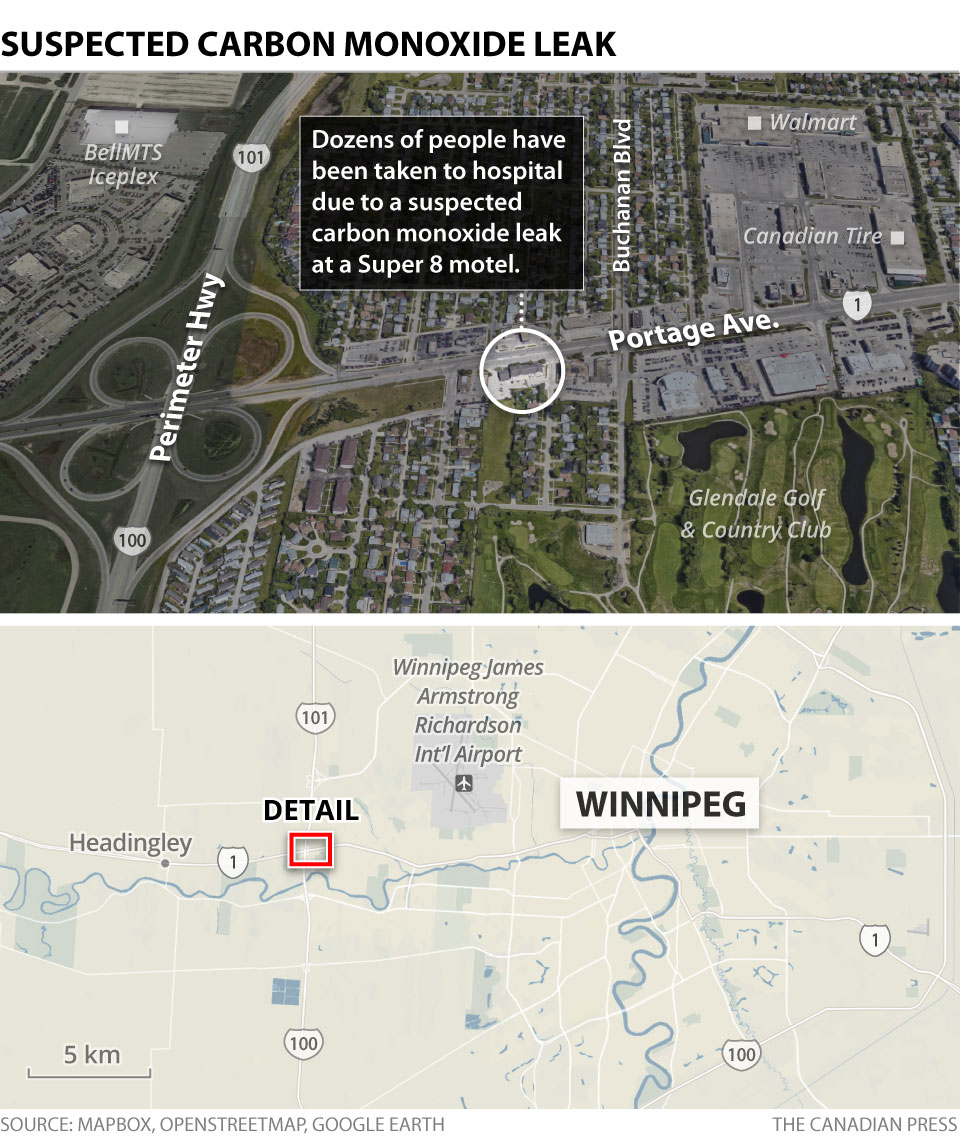 Lane said odorless carbon monoxide binds 200 times more strongly to the hemoglobin in blood than oxygen does — so it prevents people from getting oxygen to their cells.

"It's not a pleasant experience," said Brent Brooks, in town from Flin Flon and a guest of the Super 8. "I've had it (carbon monoxide poisoning) before, I've worked underground for years."

His wife started feeling ill first, then his 15-year-old son, and they were taken away by ambulance. He was taken to hospital later, after a finger-prick test showed he had 27 per cent carbon monoxide in his blood.

According to the University of Rochester, a normal level for an adult is around two per cent; heavy smokers can have up to eight or nine per cent carbon monoxide in their blood.

Sergiy Bolshakov said he was watching TV in his room when he started feeling ill and noticed a headache. But he didn’t realize something was wrong until fire crews came to knock on the door.

They basically "kicked us from (the) room, but (in) a good way," he said. He and his business partner, Oleg Lugovsky, were taken to hospital, where it was determined they had 20 per cent CO in their blood.

They were given oxygen and eventually got the all-clear to return to the hotel.

More Sergiy on the carbon monoxide incident at the Super 8 on west Portage this morning. pic.twitter.com/ui3Cnq5xYx

"It’s my first day in Winnipeg, but I’m sure the rest of the days will be better," he said.

He plans to stay at the Super 8 for the rest of his 18-day business trip from Toronto.

"No no no, why?" he said when asked if he would switch hotels. "What’s happened, it could happen anywhere."

The hotel was cleared for re-entry after 2 p.m. and guests began to return — some only to get their bags and go.

The Mulolani family drove in from Moose Jaw Tuesday afternoon and said they hadn't gotten a call from the hotel warning them what happened. "With young children, it's not a risk you want to take," said Kathryn Mulolani. They said the hotel provided them a room at the Motel 6 motel nearby in Headingley.

The supervisor of the Chicken Chef restaurant next door commended the work of emergency crews to get people out of the three-storey hotel quickly.

"It was pretty overwhelming, seeing the whole street blocked... It was crazy," said Nicholas Walker.

Manitoba Hydro spokesperson Bruce Owen said carbon monoxide poisonings usually happen in the winter when furnaces are pushed to the max — not in July.

"That just doesn’t compute," Owen said. "So something else had to have happened recently at the hotel to have caused this."

"It’s caused by the incomplete or improper ventilation of some gas-powered combustion, be it a furnace, be it a dryer, be it a propane barbecue," he said. "I don’t know what caused it today, that’s what we’re trying to nail down."

He said it would likely be caused by a natural-gas or propane-powered appliance.

A list of other significant recent deaths and injuries involving carbon monoxide.

May 2019: A woman was killed and a young person was injured in a suspected carbon monoxide poisoning at a private campground in Salmon Arm, B.C. Police said it appeared they were affected while burning wood in a cooking pot inside their tent.

March 2019: Eighty people were taken to hospital in St. John's, N.L., after being exposed to carbon monoxide at a hockey arena. The leak was linked to the rink's ice cleaning machine.

A list of other significant recent deaths and injuries involving carbon monoxide.

May 2019: A woman was killed and a young person was injured in a suspected carbon monoxide poisoning at a private campground in Salmon Arm, B.C. Police said it appeared they were affected while burning wood in a cooking pot inside their tent.

March 2019: Eighty people were taken to hospital in St. John's, N.L., after being exposed to carbon monoxide at a hockey arena. The leak was linked to the rink's ice cleaning machine.

December 2018: A woman and her two children were rushed to hospital for treatment after they were found unresponsive in a car resting against a guard rail in Abbotsford, B.C. The fire department said vehicular carbon monoxide poisoning is most commonly caused when cars are left running in an enclosed space, but exhaust fumes can also leak into the passenger compartment.

December 2018: Thirteen people with carbon monoxide poisoning were taken to hospital in Vancouver. Energy company FortisBC said a technician identified a problem with a boiler in their building.

February 2018: RCMP say a faulty water heater was to blame for a buildup of carbon-monoxide in a Calgary-area apartment block that killed a 12-year-old boy. The child was taken to hospital in critical condition and died.

December 2017: A farm company in Delta, B.C., said 43 workers received medical evaluation and treatment for carbon monoxide exposure after one employee reported feeling unwell. Workers were using gas-powered pressure washers in a greenhouse, which the fire department said did not have adequate ventilation.

November 2017: Investigators blamed a lack of boiler maintenance and a deteriorated chimney for a buildup of carbon monoxide gas in a Saskatoon apartment block where a 41-year-old woman was found dead. Fire officials said a leak allowed the gas to escape from the exhaust system and build up in the block's interior.

May 2017: Two people were taken to hospital and 26 others were treated on scene after a carbon monoxide leak at a Saskatoon food manufacturing and labelling plant. It was determined the gas originated in a propane-fuelled forklift.

December 2016: A person who died after he was found unresponsive from an apparent heart attack at a Winnipeg business was actually the victim of carbon monoxide. The fire commissioner said a vent cover on the building's chimney had collapsed, preventing it from venting properly. The same business was evacuated the next day when up to 20 people started feeling sick.

He said measuring people’s exposure in parts per million is difficult because different bodies and ages process it differently, plus rooms might have had different levels of exposure in their rooms.

"Nobody required resuscitation at the scene, which is a good sign," he said.

"If people are experiencing a light headache, nausea, shortage of breath, and they’re just lethargic — that’s a sign of carbon monoxide poisoning," he said.

"If any lesson is to be learned in this, it’s that you, too... should have have a CO detector where you live," Owen said. "I’ve got three of them."

-- with files from Canadian Press

What you need to know now about gardening in Winnipeg. A monthly email from the Free Press with advice, ideas and tips to keep your outdoor and indoor plants growing.

We sincerely apologize to the guests who were affected by this morning’s incident.

The safety of our guests and hotel teams is extremely important to us and we are incredibly grateful for the efforts of today’s emergency responders.

Although this hotel is individually owned and operated under a franchise agreement, we have been in touch with its owner and understand that the hotel was cleared to reopen by the city earlier today.

The Free Press is certified by