Justin Bieber opened his show at the MTS Centre Saturday night with some not-so-subtle imagery. He rose from the floor enclosed in a glass box, which then made its way up above the crowd as he sang Mark My Words, 12,000 fans screaming in adoration as he paced around like the “zoo animal” he sometimes feels like (according to his Instagram).

Justin Bieber opened his show at the MTS Centre Saturday night with some not-so-subtle imagery. He rose from the floor enclosed in a glass box, which then made its way up above the crowd as he sang Mark My Words, 12,000 fans screaming in adoration as he paced around like the “zoo animal” he sometimes feels like (according to his Instagram).

It’s no secret Bieber has had his troubles as of late — in the last few weeks alone, he’s instituted an unpopular ‘no photo’ policy with his fans and, just a few nights ago, got into a much-publicized scrap in a hotel in Cleveland. But the Purpose World Tour is all about redemption; all about reminding everyone why he’s managed to create the career he has and blocking out that negativity.

That means, of course, everything about his one-hour, 40-minute set was over the top; a complete sensory overload that proved what he’s capable of doing — lights and lasers shot out from every corner of the stage, massive screens on both levels of the two-tiered stage projected a constant slew of moving images, fireworks occasionally exploded from the back of the stage, and if it weren’t for the constant spotlight on Bieber himself, it would be easy to lose him among the dozen or so dancers busting their butts doing insane choreography and acrobatics all night.

There was also a hype man on stage, occasionally bellowing out commands to the audience; he was a strange and annoying distraction.

This is probably the largest stage setup that has been in the MTS Centre for some time, and the visuals were incredibly elaborate. During I’ll Show You, Bieber hunkered down in a cage-like contraption with orange and yellow lights swirling around him as the screens behind echoed with even larger bursts of light. It was exciting and stunning.

It seems the two-week break has done Bieber well — his last tour stop was in Toronto May 19 — his moves were sharp and he was in good spirits, even cracking a smile and shaking fans’ hands a few times. Having watched a couple of clips of past tour stops on YouTube, his lethargy there was evident, but in Winnipeg, he seemed well-rested and on his game. The 22-year-old Canadian has always been credited as an excellent dancer, and as he knocked out routine after routine, including an especially impressive, rapid-fire combo in Children, it’s easy to see why. Even when he wasn’t giving it 100 per cent, it still looked pretty good.

The Purpose World Tour, unsurprisingly, is focused most on his music from that album — there were only three songs from his previous seven albums, the first of which to appear, Boyfriend, conjured such an ear-splitting reaction it was almost funny. He also threw in As Long As You Love Me and the infinitely popular 2010 hit Baby.

The spectacle hit a whole new high as Bieber launched into his newest single, Company. A trampoline with a catwalk on all sides descended from the ceiling on which Biebs and crew promptly starting knocking out a killer routine that culminated with the man himself doing a few bouncing backflips, which earned perhaps the loudest hollers of the night.

It’s unclear (and unlikely) if Bieber was producing live vocals the entire night, but there was one section where there was no doubt — he sat alone on a red velour couch with his acoustic guitar and blew through Home to Mama and Love Yourself.

He later closed his main set with title track Purpose, a song that is similarly stripped down compared to the rest of his show. All three songs were well-done, with Purpose being the clear standout, and were the only moments in which Bieber’s voice was allowed to take centre stage. While they weren’t flawless renditions, they were real and satisfying.

As rain fell from the roof soaking Bieber during the one-song encore, Sorry, it only helped solidify that shows like this one are less about the music and more about the presentation.

In that context, the Purpose World Tour is a success.

Raia, 26, studied jazz at Columbia University in New York, and that influence can easily be heard in her scat-like runs and fluttering vibrato. She is a talented singer to be sure, but Raia’s real weapon is her performance ability. It takes an incredible amount of confidence to walk out on a stage that size completely alone — no band, no dancers, just her and a mic — but Raia carried herself extremely well, manoeuvering around the stage and working the crowd like a pro. 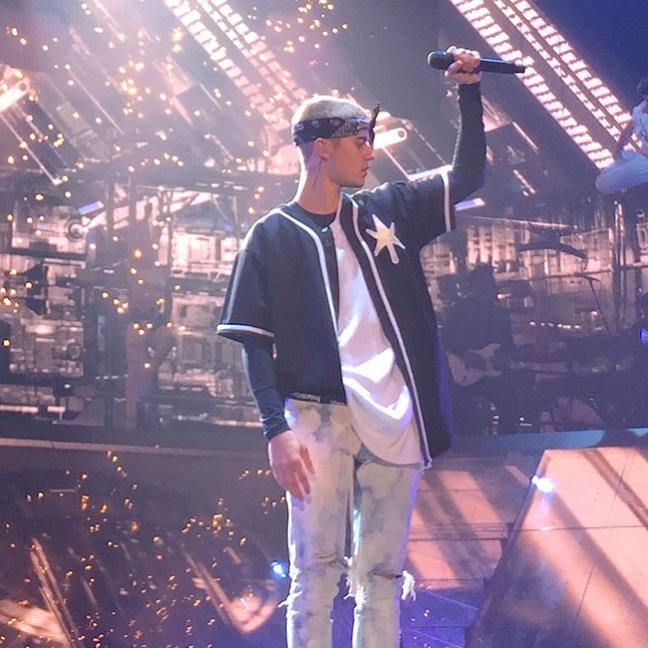 4 stars out of five