In May, the country went into mourning after the announcement of Tragically Hip singer Gord Downie’s terminal brain cancer diagnosis.

In May, the country went into mourning after the announcement of Tragically Hip singer Gord Downie’s terminal brain cancer diagnosis.

In the weeks that followed, music fans and journalists the world over poured their hearts out — homages to monumental Hip songs that helped shape their lives, favourite albums and shows and quotes, eulogistic tomes about how the Hip, and Downie specifically, helped shape the country’s musical identity. Even our own Free Press reporters and columnists have tackled the topic from every possible angle, trying their best to do the band’s legacy justice.

For local Hip fans, all those words, conversations, stories and memories have been a pathway to Friday night, a night both anxiously anticipated and dreaded — very likely the last Tragically Hip show in Winnipeg.

But the vibe Friday night was definitely not one of sadness. As the first waves of applause began to rumble through the MTS Centre, the screams were guttural and substantial, packed with excitement, admiration and respect.

At 8:30 p.m. on the nose, Gord Sinclair, Rob Baker, Paul Langlois, Johnny Fay and Downie were greeted by a standing ovation. Downie, dressed in a metallic lime-green suit, wasted no time throwing out some of his signature dance moves, his erratic limbs popping and locking as he and his bandmates kicked off the show with At the Hundreth Meridian.

Every song elicited an overwhelming roar from the crowd, but as the all-too-familiar opening riff of Wheat Kings rang through the arena, it was clear that song held special meaning for most in attendance.

Whatever else this tour may be, it’s also to promote their new record, Man Machine Poem. The top of their set had a handful of new tracks, such as Machine, Tired As F— and What Blue. The Hip put equal gumption into these cuts, but the crowd was slightly less enthusiastic; the songs are solid but haven’t had time to marinate as others have.

The faces of Gord 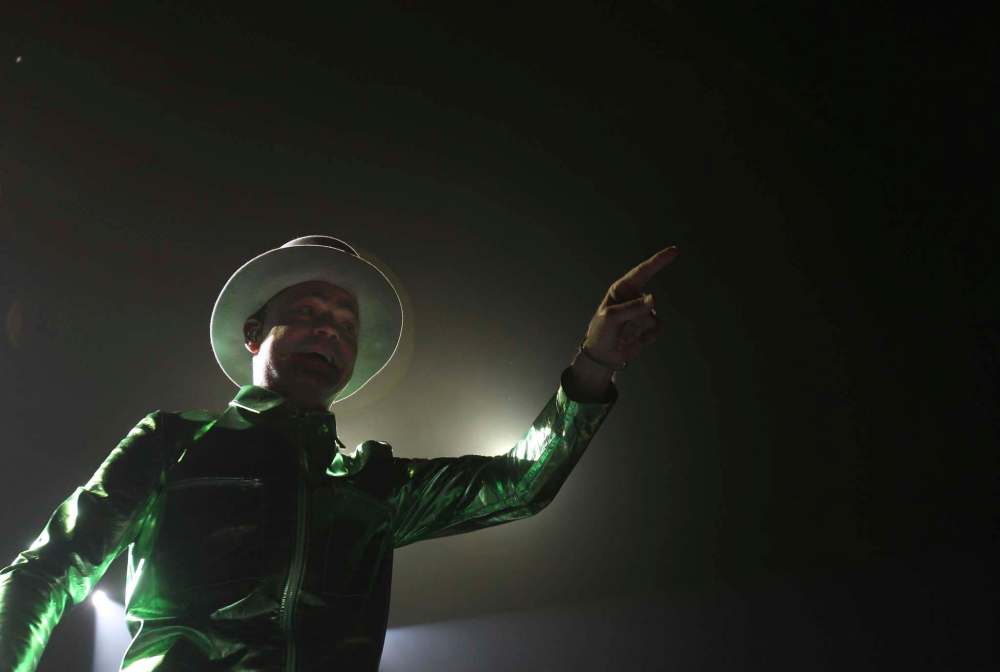 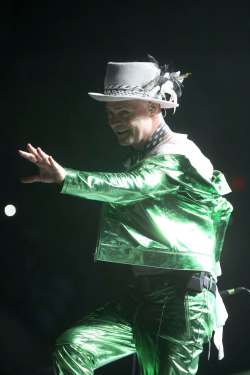 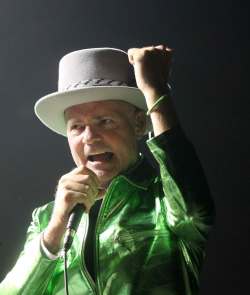 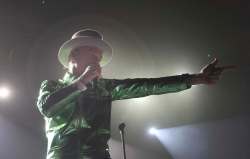 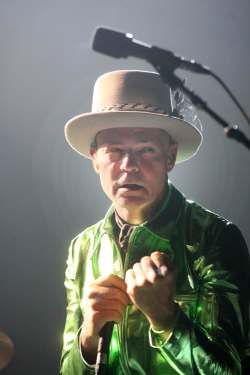 For the first portion of the show, the five men stayed close together, all inhabiting an intimate circle, set up more like a jam space in a small basement than the stage of an arena tour. A quick intermission and wardrobe change for Downie (now in a metallic gold suit) later, and they were in full rock band mode, spread out with room to jam. It’s impossible to fault Downie as a frontman — he is odd and endearing, confident and commanding. Is he a flawless vocalist? Absolutely not. Does that diminish who he is as a performer and songwriter? Absolutely not. Of course, it helps that his bandmates are a quartet of meticulous and skilled musicians who provide the solid foundation that allows Downie to shine in his own very distinct way.

As has been noted, the setlist for each concert on this tour varies from city to city, and with as extensive a catalogue as they have, why not? Escape is at Hand for the Travellin’ Man, Bobcaygeon and Poets from 1998’s Phantom Power, The Last of the Unplucked Gems and Little Bones from 1991’s Road Apples — each little nugget of songs offering a nostalgic window into a specific career point, and for many, a specific life point.

The third section of the evening was welcomed by yet another quick change for Downie (now in metallic teal) as the stage was surrounded on its periphery by cage-like, glowing tubes. Despite being nearly 90 minutes in at this point, there were no signs of fatigue. In fact, as the night went on, things seemed to get more and more ramped up, almost as if it were tracking the phases of their career, from tiny clubs to full-out arena rock shows.

The Hip slowed things down with Long Time Running, Downie’s gravely voice powering through the chorus as 16,000 fans sang along, before launching into the last track of their main set, Twist My Arm. A quick but hearty three-song encore followed (Boots or Hearts, Opiated,New Orleans is Sinking), as did a second encore studded with the most boisterous singalong of the night, Ahead By a Century.

The Free Press has decided to forgo our usual star rating because, on this rare occasion, it’s irrelevant. No number of stars is going to adequately or unbiasedly capture the emotion and intention behind this night — it’s impossible to attach a numerical value to a goodbye, so we won’t.

What was clear and definable, however, is the passion Hip fans feel for this band, as the standing ovation started after the first song and remained the whole night through, and chants of “Gordie, Gordie, Gordie,” erupted more than once. As Downie took the stage solo at the end of their main set, humbly nodding and waving to his fans, the adoration in the room was palpable. The applause continued to grow, so loud and full it seems unlikely any other artist could ever compare, solidifying the moment as one local Hip fans will never forget.

Gord's last scream: Tragically Hip frontman asks us all to bear his pain