Perpetual emotion After a topsy-turvy 18 months, RWB prepares for a moving return to the stage By: Jen Zoratti Posted: 7:00 PM CDT Tuesday, Oct. 12, 2021

It’s been a long year-and-a-half for the Royal Winnipeg Ballet.

It’s been a long year-and-a-half for the Royal Winnipeg Ballet.

After the pandemic wiped out what was supposed to be a jubilant 80th season in 2020/21, the company had to figure out how to keep on dancing. Dancers rearranged living-room furniture to accommodate grand jetés in those early, Zoom-led days, which were followed by months of masks, cohorts, distancing — tricky, for a contact art — and virtual performances.

And so, when the RWB finally takes the stage — live and in person — at the Centennial Concert Hall on Thursday night to open its 2021/22 season with the mixed program Perpetual Motion, you can expect a few tears.

“It’s going to be a very emotional first show back,” says second soloist Katie Bonnell. “This is our lives. We put so much of ourselves into this. And it’s been a long 18, 19 months just hoping and praying and waiting for this moment, and it’s finally here. Yeah, I’m gonna be a mess.”

“It’s been a very long time getting here,” echoes soloist Elizabeth Lamont. “You know, I was taking class in my kitchen, and then I was so excited once we were in cohorts to be able to take class in the studios. But getting back here, things are starting to feel more normal. We’re still wearing masks in the studio and we’re still taking a lot of precautions, obviously — but we are finally allowed to partner, which has been so exciting.”

Perpetual Motion, which runs to Oct. 17, is composed of two very different favourites that were meant to be included in the 80th anniversary retrospective: Toer van Schayk’s Seventh Symphony, choreographed, of course, to Beethoven’s masterwork, and Agnes de Mille’s Rodeo, a theatrical ballet about the tomboyish Cowgirl, who is trying to win the heart of the Head Wrangler at the Burnt Ranch, with music by Aaron Copland.

“Seventh Symphony is kind of the perfect ballet to start the season with because the whole ballet — it’s a feeling, not a story,” says RWB associate artistic director Tara Birtwhistle. “But when you watch it, it’s the feeling of going on a journey, and then rising up together as a group. It’s that feeling of inspiration, rising together, coming up from something that may be dark.

“And then Rodeo is just good old-fashioned fun. It’s comfort food for the soul.”

“Comfort food for the soul” could be a through-line for the 2021/22 season, which features perennial favourites, such as Nutcracker — whose return on Dec. 18 to 28 “just screams normal,” Birtwhistle says — and The Sleeping Beauty (Feb. 23-27), and quintessential RWB productions, such as Val Caniparoli’s A Cinderella Story.

“Often people will say — and it’s kind of silly — but they’ll say, ‘Well, I’ve seen it before,” says RWB artistic director and CEO André Lewis. “It’s a bit like saying, I’ve drunk wine before, so I never want to drink it again. Each bottle of wine has its own flavour. Each artist brings their own interpretation to a set of steps.”

Because the pandemic is still posing logistical challenges, the company has elected to keep things in house this season, Birtwhistle says.

“We have all the props and costumes that live with us live in the warehouse, the ballets can be set by our own artistic staff — although we have discovered Zoom, so we had some artistic consultants for Rodeo and Seventh Symphony Zoom into the studio,” Birtwhistle says, adding that video conferencing will likely remain a tool in the ballet’s artistic arsenal so they won’t have to, say, fly in a choreographer for a one-day workshop. “It opens up the world a little bit.”

Many COVID-19 protocols will remain place. Patrons must show proof of full vaccination and photo ID to enter the concert hall, and Lewis says all the dancers are fully vaccinated. In addition to returning to live performance, the company will be navigating new COVID choreography backstage. That’s why Lewis wanted to kick off the season with a ballet that didn’t have a lot of backstage technical demands — such as flying, for example — to avoid having too large a crew.

Onstage, however, things will feel as close to normal as they’ve felt in a long time. (And it’s not just the dancing that will be live; the Winnipeg Symphony Orchestra will take its place in the pit, as well.)

“As nice as it was to have somewhat of a season last year with the digital stuff, it just isn’t the same,” says second soloist Stephan Azulay. “We kept ourselves busy, but it was really just a waiting game until, when can we come back on stage? This is a really exciting moment for us and the audience members and the arts community.”

“It’s live for a reason,” Lamont says, adding that she’s excited to reconnect with the energy of an in-person audience.

Now, Lewis wants to start rebuilding momentum. “For people to come, to know that we are alive, that we are in person, that we can do this. People will be safe, precautions have been taken, protocols are in place, come a little bit earlier than normal so that you can get through and make it happen, but not to be afraid.”

“It’s been a long year-and-a-half,” Birtwhistle says. “It would be great to have bums in seats.” 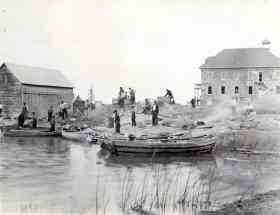 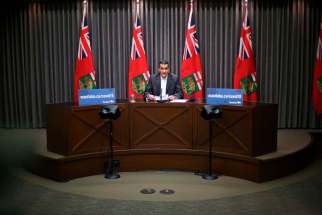 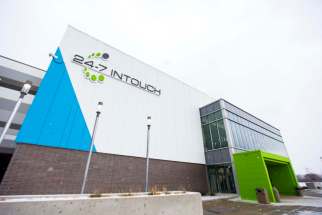 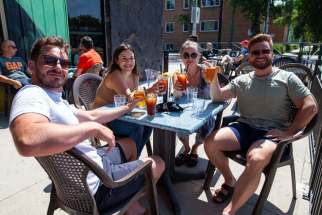 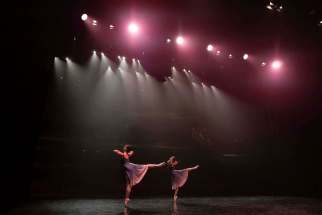 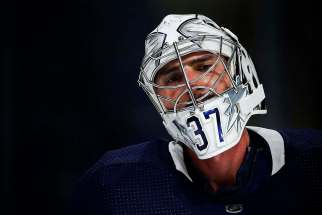 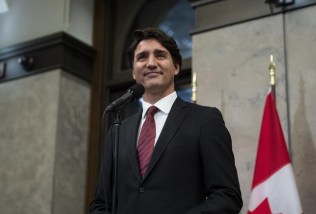