PARIS - French President Emmanuel Macron pledged Tuesday to rebuild Paris' beloved Notre Dame Cathedral "even more beautifully" after a raging fire destroyed its spire and its roof but spared most of the structure, including the church's twin medieval bell towers.

PARIS – French President Emmanuel Macron pledged Tuesday to rebuild Paris’ beloved Notre Dame Cathedral “even more beautifully” after a raging fire destroyed its spire and its roof but spared most of the structure, including the church’s twin medieval bell towers.

Macron said he wanted to see the renovation of the beloved Roman Catholic architectural landmark completed within five years.

“We have so much to rebuild,” Macron said in a televised address to the nation. “We will rebuild Notre Dame Cathedral even more beautifully. We can do it, and once again, we will mobilize (to do so).”

Authorities consider the fire an accident, possibly as a result of restoration work at the global architectural treasure that survived almost 900 years of tumultuous French history but was devastated in the blaze on the second day of Holy Week.

Paris prosecutor Remy Heitz said the inquiry into the fire would be “long and complex.” Fifty investigators were working on it and would interview workers from five companies hired for the renovations to the cathedral’s roof, where the flames first broke out.

Investigators have already questioned nearly 30 people, said a Paris judicial police official, speaking on condition of anonymity in order to comment on an ongoing probe.

News that the fire was probably accidental has done nothing to ease the national mourning for the symbol of national pride. Hundreds of people gathered for a vigil prayer across the Seine from the cathedral, singing and listening to music by a string quartet.

Interior Minister Christophe Castaner said there were still some risks to the structure and that it was “under permanent surveillance because it can still budge.”

A plan to safeguard the masterpieces and relics was quickly put into action after the fire broke out.

The Crown of Thorns, regarded as Notre Dame’s most sacred relic, was among the treasures quickly transported after the fire broke out, said Deputy Mayor Emmanuel Gregoire. Brought to Paris by King Louis IX in the 13th century, it is purported to have been pressed onto Christ’s head during the crucifixion. Also saved was the tunic of St. Louis, a long, shirt-like garment from the 13th century, said Culture Minister Franck Riester.

“The works of art, the most precious treasures were secured last night,” Riester told reporters, thanking teams from city hall, the culture ministry, firefighters and the bishopric who worked to save the items.

Some of the works were being transferred from City Hall to the Louvre, where they will be dehumidified, protected and eventually restored. The minister said the cathedral’s greatest paintings would be removed starting Friday. “We assume they have not been damaged by the fire but there will eventually be damage from the smoke,” he added.

The 3-meter-tall copper statues that looked over Paris from Notre Dame’s 96-meter peak already had been removed from the roof days ago and sent to southwestern France as part of a 6 million-euro ($6.8 million) renovation on the spire and its 250 tons of lead.

Much was saved in the interior too. The only major work damaged inside was the cathedral’s high altar, installed in 1989 under Cardinal Jean-Marie Lustiger. It was hit when the spire collapsed, said Laurent Prades, heritage director for Notre Dame.

“We have been able to salvage all the rest,” said Prades, who watched the recovery overnight. “All the 18th century steles, the pietas, frescoes, chapels and the big organ are fine.”

The three large stained-glass rose windows, among the most famous parts of the cathedral, were not destroyed, but might have been damaged by the heat and will be assessed by an expert, he added.

“The task is — now the risk of fire has been put aside — about the building, how the structure will resist,” said Junior Interior Minister Laurent Nunez.

The first 24-48 hours were crucial to protecting the stone and wood structure from water damage and assessing the next steps, she told The Associated Press, warning that parts of the cathedral remain “extremely fragile,” notably hundreds of tons of scaffolding around the spire that collapsed. Notre Dame is part of a UNESCO heritage site and UNESCO has offered its expertise.

Pope Francis offered his prayers that Notre Dame, the “architectural gem of a collective memory,” will once again be a shrine to the Catholic faith, a symbol of the French nation and a spiritual and architectural gift to humanity.

In a condolence note to Paris Archbishop Michel Aupetit, Francis said the fire was particularly devastating given that it came during the sombre days leading up to Easter during which Christians commemorate the death and resurrection of Jesus.

Repairing the cathedral, including the 800-year-old wooden beams that made up its roof, presents challenges.

The roof cannot be rebuilt exactly as it was because “we don’t, at the moment, have trees on our territory of the size that were cut in the 13th century,” said Bertrand de Feydeau, vice-president of preservation group Fondation du Patrimoine, adding the roof restoration work would have to use new technology.

Also of concern, Feydeau said, is the organ, “a very fragile instrument, especially its pipes.”

“It has not burnt, but no one can tell whether it has been damaged by water. Nobody knows if it is a functioning state or will need to be restored,” he told AP.

Offers of assistance flowed in from around the world to help restore the 12th century tourist attraction to its former glory.

Poland, the Czech Republic and Greece were among those offering to send experts from their own restoration projects, while major French businesses pledged financial assistance.

In his speech, Macron thanked firefighters, police and those who pledged funds, although his goal of rebuilding the cathedral in five years seemed ambitious.

Peter Fuessenich, who oversees reconstruction for the Gothic cathedral in Cologne, Germany, said it could take decades to repair Notre Dame. Cologne Cathedral was heavily damaged during World War II and work to repair it is still ongoing more than 70 years later.

“It will certainly take years, perhaps even decades, until the last damage caused by this terrible fire will be completely repaired,” he told broadcaster RTL. “When the last stone was set in Notre Dame, the first one was laid here in Cologne, and in this respect it affects us all very much.” 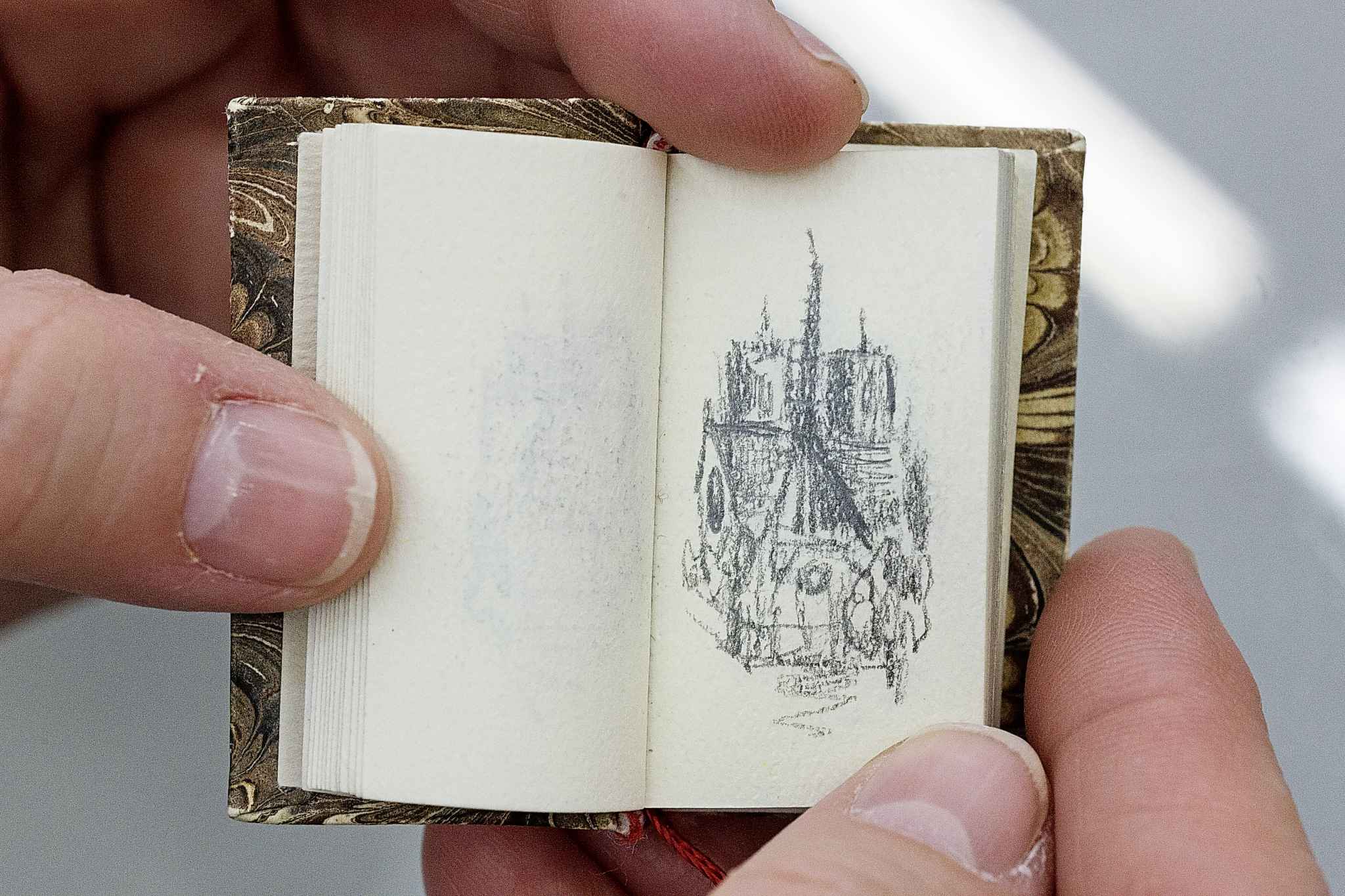 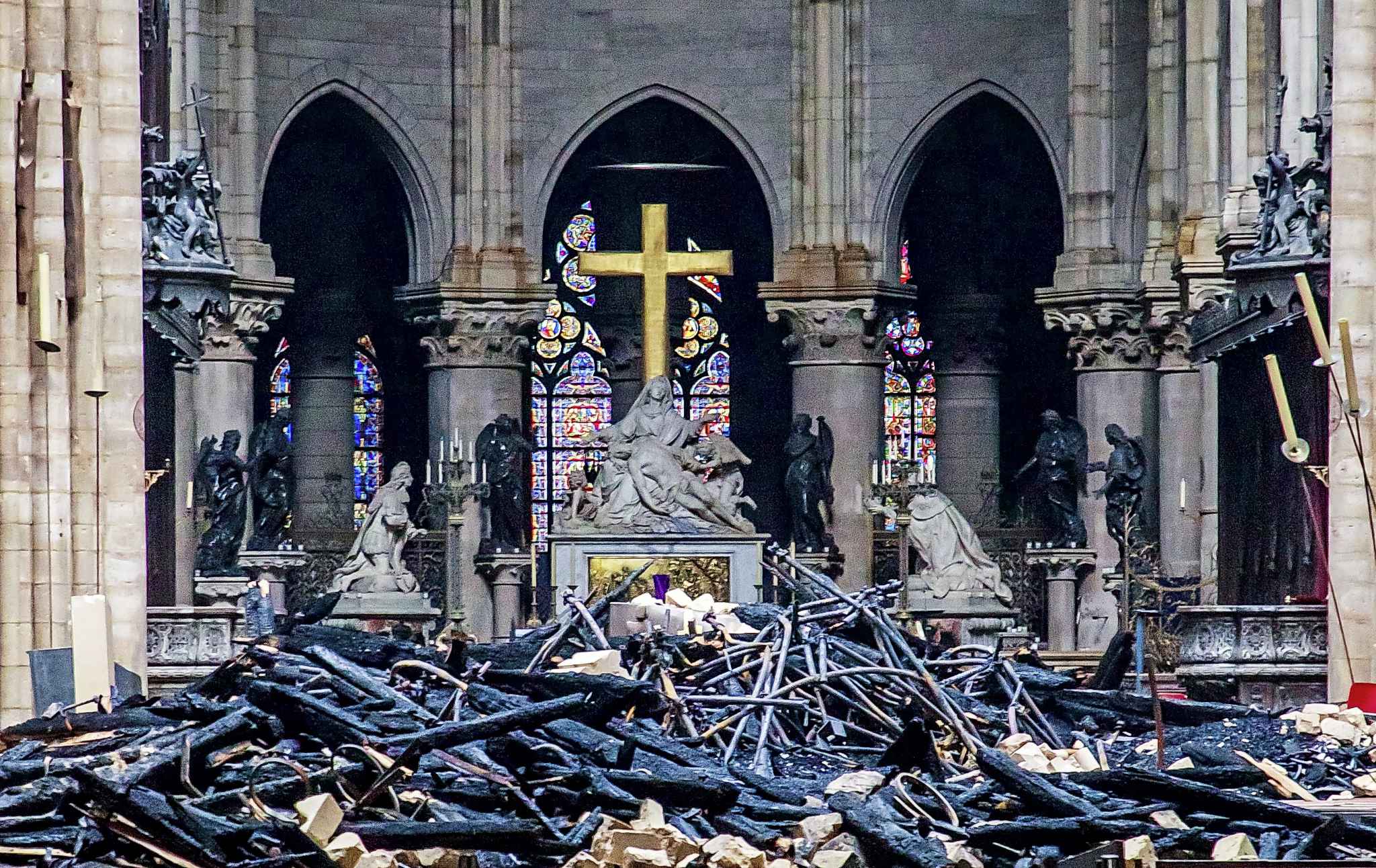 Notre Dame hailed as monument to the 'best of civilization' 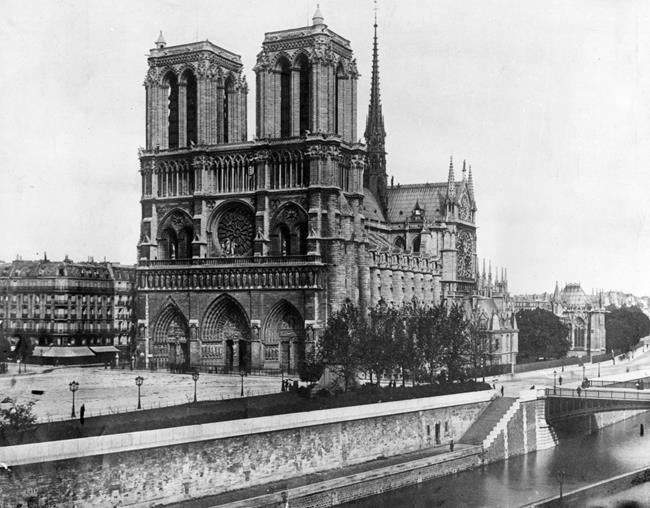 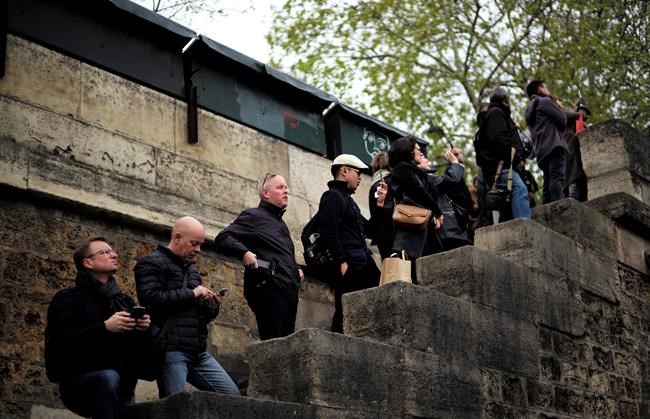 Around world, 'our hearts ache' at Notre Dame Cathedral fire 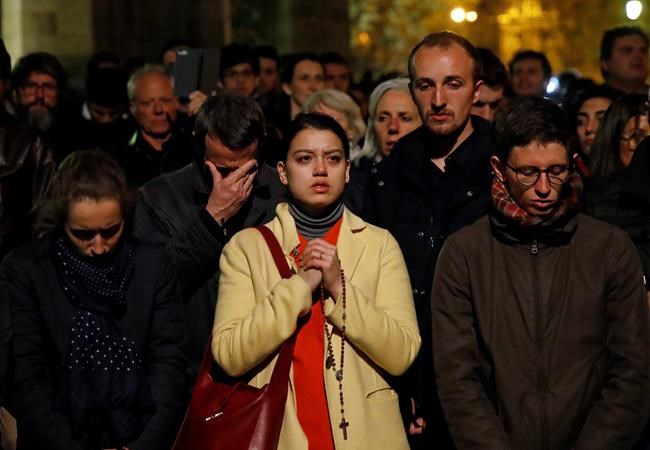 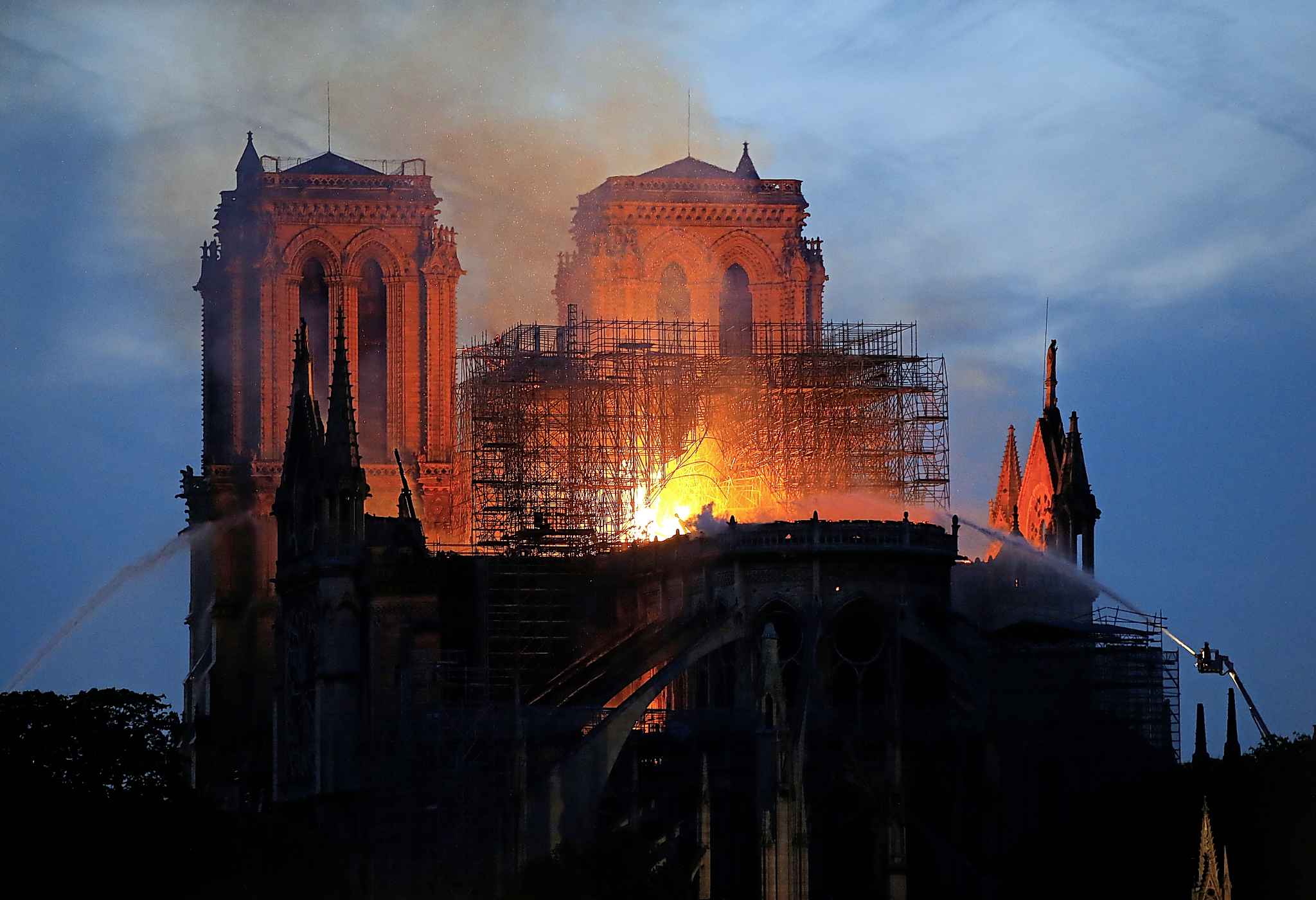 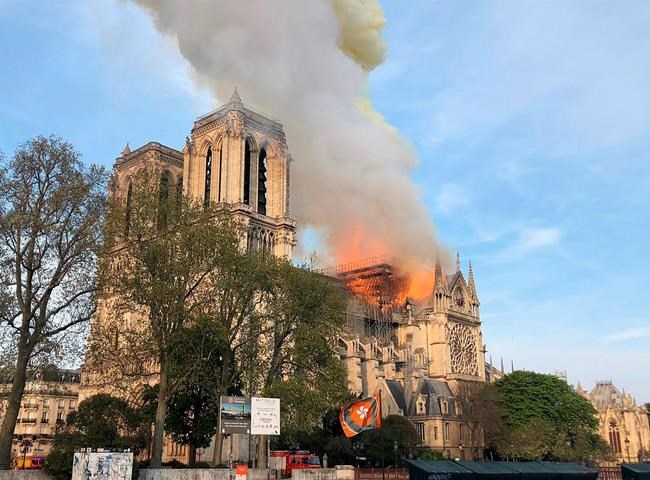