While 13 Manitoba-grown acts were nominated at the 43rd annual Juno Awards — handed out over two nights this weekend in Winnipeg — only two emerged with hardware: Winnipeg-born jazz bassist/composer Mike Downes and Brandon-born violin virtuoso James Ehnes emerged with hardware.

While 13 Manitoba-grown acts were nominated at the 43rd annual Juno Awards — handed out over two nights this weekend in Winnipeg — only two emerged with hardware: Winnipeg-born jazz bassist/composer Mike Downes and Brandon-born violin virtuoso James Ehnes emerged with hardware.

Ehnes also had the distinction of being only double winner at Saturday night’s Jian Ghomeshi-hosted, industry-only gala, at which 35 of this year’s awards were handed out. The remaining six will be awarded during Sunday night’s broadcast which airs on CTV at 8 p.m. from the MTS Centre.

The darling of the Junos, broadcast host and five-time nominee Serena Ryder, was crowned Artist of the Year — one of the most prestigious awards of the night — beating out Céline Dion, Michael Bublé, Drake and Robin Thicke. She’s up for four more prestigious awards at Sunday night’s telecast, including Single of the Year, Album of the Year and Songwriter of the Year.

The twins’ synthpop opus Heartthrob was crowned Pop Recording of the Year, besting efforts by Bublé, Robin Thicke, Walk Off The Earth and Hedley. “Oh my god we haven’t won anything since 1996. We want to start with our piano teacher,” Sara said in her acceptance speech. “This was an important one for us, we’ve been all kinds of bands. We wanted to make a pop record. Thanks for honouring that.” It may well be their weekend; Tegan and Sara are up for Single of the Year, Group of the Year and Songwriter of the Year at Sunday’s show.

Montreal indie rock juggernaut Arcade Fire — which leads the pack with six nominations for its Talking Heads-indebted double album Reflektor — won its first Juno of the weekend at the gala. Reflektor was named Alternative Album of the Year, beating out local electropop act Royal Canoe, Rah Rah, The Darcys and Yamantaka // Sonic Titan. Arcade Fire could pick up five more awards at Sunday’s broadcast, at which it’ll be “performing” at Sunday’s broadcast via video.

Two of Canada’s most buzzed-about cowboys took home Junos. Dean Brody’s Crop Circles was named Country Album of the Year — an honour, Brody said backstage, that’s better than being named one of Hello Magazine‘s 50 Most Beautiful People. “The other is just ammunition for all my friends.” Brett Kissel (who was born in 1990 in case you haven’t felt old yet today) was named Breakthrough Artist of the Year.

The Nicest Guy in Canada has an aw-shucks quality that didn’t go unnoticed. “I’ll never forget this night,” Kissel said in the night’s most earnest, but sincere, speech. He was just as charming backstage. “I’m feeling incredible. I’m excited to share this with everyone back home on the cattle ranch.” Adorable. He’s also been wearing the same cowboy hat since he was 12.

Rock album of the year went to Matt Mays’ Coyote, beating out efforts by CanRock stalwarts such as Matthew Good and Headstones. The Nova Scotia-raised rocker was absent when his name was called — “I was out there talking about surfing. Sorry everybody, that was lame” — but gave a touching acceptance speech dedicating the award to his guitarist Jay Smith, who died last year. “We lost a good friend and a brother,” Mays said. “This goes out to his family. It goes out to my band who played through a really tough time.” Mays was nominated for two Juno awards at the 2005 awards in Winnipeg.

Rap Recording of the Year went to Drake’s Nothing Was The Same, shutting out releases from Shad, Rich Kidd, SonReal and broadcast host Classified — who won in this category last year. Drake wasn’t at the gala; he’s probably kicking it with Rihanna somewhere. R&B/Soul Recording of the Year went to JRDN — aka Ralph Jordon Croucher — and the always best-dressed Kardinal Offishall for Can’t Choose.

Backstage, Kardi talked about how far the Junos have come since Rascalz famously refused its 1998 award for Best Rap Recording because it was presented in the non-televised portion of the ceremony. Rascalz won the award for Cash Crop, which contained Northern Touch, one of the most important songs in Canadian hip hop. “Classified is co-hosting the award show. We’ve come a long way with the Junos. Tonight was really a proud moment.”

Triple threat George Leach — he’s a musician, artist and actor — snagged Aboriginal Recording of the Year for his sophomore album, Surrender. Backstage, he spoke about the unifying power of music. “Music is to bring people together. It’s never to separate,” he said, later adding, “I think music is one of the last platforms for people to say what they want to say.”

Winnipeg noisecore act KEN mode, who won the inaugural Metal/Hard Music Album of the Year Juno in 2012 were beat out by Whitby, Ont. progressive metal act Protest the Hero, whose Volition was awarded the trophy.

Ron Sexsmith’s 13th album, Forever Endeavour, proved to be lucky number 13, snagging him the Juno for Adult Alternative Album of the Year. Backstage, he mused on the AAA category. “This category didn’t exist when I won (for Other Songs) in 1998. I won in roots and traditional, which I felt bad about, because I beat all these fiddlers. I’m happy they created this island for misfit toys.”

Electronic Album of the Year is a consistently interesting category, and 2014 was no exception. Halifax-raised DJ Ryan Hemsworth beat out Noah Pred, Graze, Blue Hawaii and this writer’s projected winner A Tribe Called Red for Guilt Trips.

“It’s important to note that we accept this award on behalf of the people who get up everyday and do virtuous things,” he said.

People like Dr. Denis Mukege, a Congolese gynecologist who “repairs the bodies and lives of women who have been raped as war intimidation tactic,” Kreviazuk said. She emotionally spoke of one woman in particular, Alice, who worked alongside the doctor to help survivors. Two weeks ago, before Dr. Mukege was due to fly to Winnipeg to receive an honourary Doctor of Laws from University of Winnipeg, Alice was brutally victimized herself. “Alice told him to say hi to Winnipeg, and thank everyone for their compassion,” Kreviazuk said. “When an injustice happens, sometimes it feels like we’re responsible. Sometimes it feels like we’re a victim. Whatever that feeling is that is stirred inside you, it’s a call to action.”

The rest of the awards, including Single, Album, and Songwriter of the Year will be handed out Sunday. 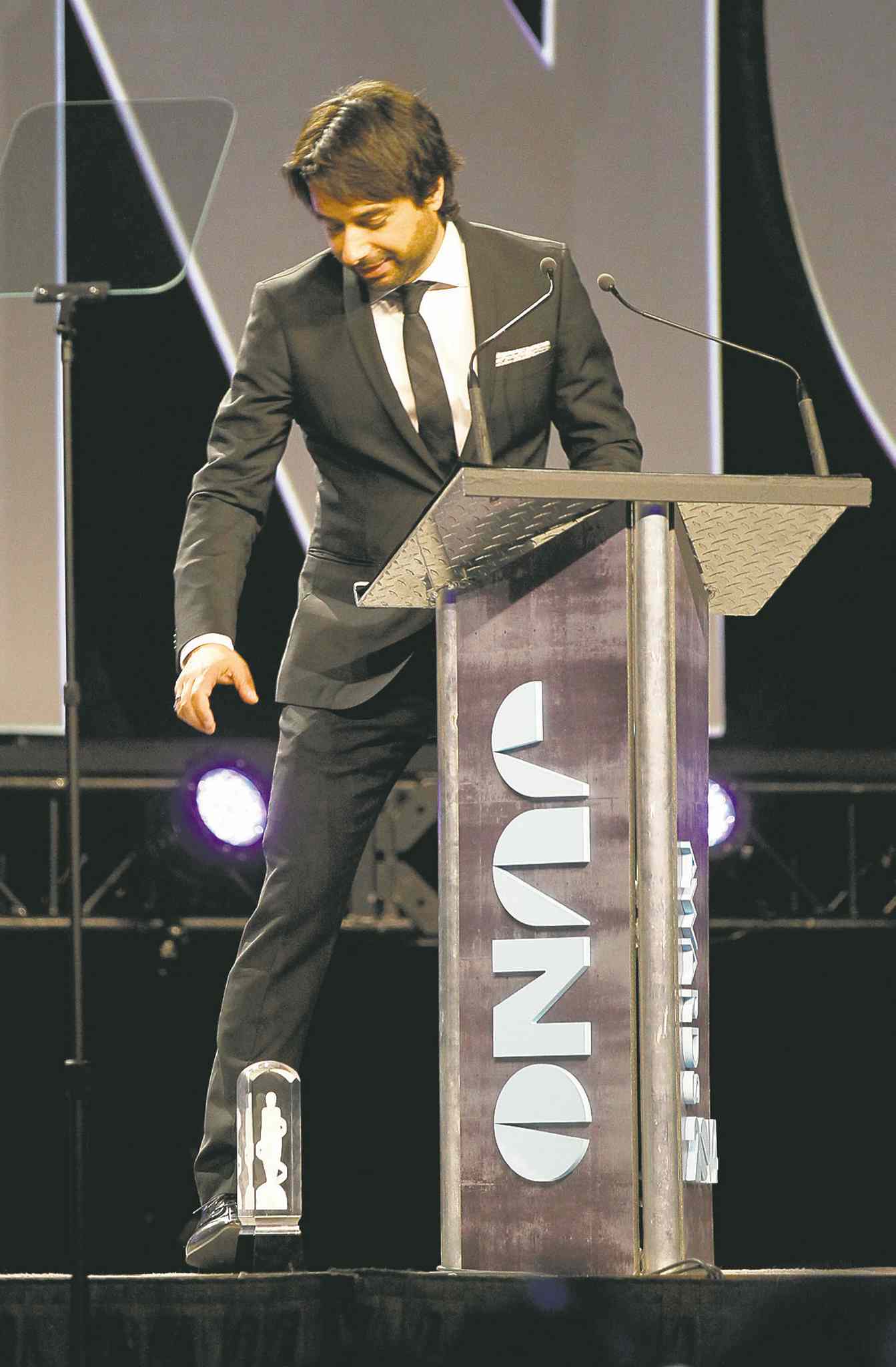 Artist of the Year
Serena Ryder

Children’s Album of the Year
Helen Austin –  Colour It

Rap Recording of the Year
Drake – Nothing Was The Same

Roots & Traditional Album of the Year: Group
The Strumbellas – We Still Move On Dance Floors

Blues Album of the Year
Downchild – Can You Hear The Music

Jack Richardson Producer of the Year
Henry “Cirkut” Water (co-producer Luke Gottwald) – “Wrecking Ball” from Bangerz, by Miley Cyrus / “Give It 2 U” from Blurred Lines by Robin Thicke

Video of the Year
Feeling Good – The Sheepdogs, directed by Matt Barnes

Metal/Hard Music Album of the Year
Protest the Hero – Volition

Pop Album of the Year
Tegan and Sara – Heartthrob