‘Here comes another car now, slowing down to take a look.”

‘Here comes another car now, slowing down to take a look.”

Ever since an aged, Orbit garbage receptacle landed in Broose Tulloch’s front yard in June 2019, the 52-year-old public works employee has grown used to drivers, cyclists, pedestrians… even the odd pizza delivery guy stopping in their tracks as they go past his yellow-and-white split-level. Curious types, some familiar with the large, white, fibreglass sphere, others not so much, pause to study the bin, a holdover from an era when dozens more dotted Manitoba highways, deposited there by the provincial government to discourage motorists from littering.

That Tulloch resides in a neck of the woods unofficially known as “the Planets” — he’s on Neptune Bay; neighbouring tracks, all intersected by Planet Street, are Mercury, Mars, Saturn and Jupiter (sorry, no Uranus) — only seems to add to the astronomical amount of attention his depository, just over a metre tall, receives on a regular basis.

Standing on his front steps, near where the Orbit is being shaded by a crabapple tree, Tulloch recalls the morning he glanced out his living room window and noticed a hydro crew assembled by the curb. Thinking the worst, that they had arrived to dig up his lawn, he ventured outside in his PJs to ask what was going on.

Zip, responded a grey-haired foreman. Rather, he was simply explaining to his younger co-workers what the Orbit was, exactly.

“I was like, ‘OK, cool, take all the time you like,’” Tulloch says, waving to the occupant of the aforementioned vehicle, who has since rolled down their window to snap a few pics with their phone.

Like this writer, who unwittingly happened upon Tulloch’s Orbit about a month ago after detouring through the Parker neighbourhood to avoid construction on Pembina Highway, you might be wondering how a homeowner on a bay named for the eighth rock from the sun came into possession of an object mimicking something out of ‘60s TV series Lost in Space.

The answer to that begins in June 1965, when a government press release quoted then-highways minister and future premier Walter Weir (PC — Minnedosa) as stating, in part, “An imaginative new approach to the problem of litter along highways is being launched this year… 10 new-style trash containers called Orbits and resembling miniature spaceships will be placed along the Trans-Canada Highway early in July.”

By the time the program was aborted in the mid-1990s, largely owing to star-crossed bins having been grossly mistreated (reports abound of Orbits being stuffed with all manner of rubbish, mouldy mattresses, liquid waste and animal carcasses included), something in the range of 150 receptacles had been fanned out across the province.

Tulloch, born in 1969, the same year Neil Armstrong became the first human to set foot on the moon, guesses he was six years old when he began noticing Orbits on the shoulder of the road, on the way to his grandparents’ farm near Portage la Prairie. A space nut for as long as he can remember, he and his brother would implore their father to pull over, so they could examine what they mistook for a grounded satellite more closely. Did their father comply, happy to satiate his sons’ inquisitiveness? Fat chance, Tulloch says with a laugh.

“He’d say something like if he was going to stop, it would be for gas and gas only,” he says, noting his father was also one for strictly obeying posted speed limits, never going a tick over or under. That meant when they passed signs indicating an Orbit’s pending presence — “Put your trash into Orbit… 5 Minutes,” or “Orbit — 10 secs,” read the placards — Tulloch and his brother would break into a loud, “10-9-8…” countdown that culminated with them whizzing by the Orbit at the predicted pace, without fail.

Fly ahead 30 or so years. Fifteen minutes early for a lunch date in Fort Garry, Tulloch, who began hosting a weekly radio show on CJUM-FM dubbed Beer for Breakfast in 1999, decided to kill some time by driving past a house on Mercury Bay he remembered from his childhood, back when it belonged to his mother’s best friend. Along the way he spied a For Sale sign in front of a home on Neptune Bay, one block over. “Omigod, I’ve always wanted to live in the Planets!” he said aloud, a dream that came true 24 hours later when a bid he hastily submitted was accepted.

In the spring of 2019, Tulloch, by then married with a two-year-old daughter Daisy, was visiting his wife’s family at their rural property near Lockport, the former home of a nine-hole golf course and accompanying miniature-golf track. Tulloch did what he describes as a “quadruple take” the second he eyeballed — Holy Ground-control-to-Major Tom, Batman! — an Orbit on the mothballed mini course, where it had served as an obstacle for players to putt around.

He had a single question: “How much?”

James Rewucki is the founder of Absurd Machine Films.

In 2013 the 55-year-old filmmaker wrote, produced and directed Where Have All the Orbits Gone?, a 15-minute documentary revolving around Manitoba’s Orbit initiative, a trash-collection system launched in 1965. We caught up with Rewucki to chat about the MTS Stories from Home production, as well as its lead character, an Orbit receptacle currently residing on Broose Tulloch’s front lawn on Neptune Bay.

James Rewucki is the founder of Absurd Machine Films.

In 2013 the 55-year-old filmmaker wrote, produced and directed Where Have All the Orbits Gone?, a 15-minute documentary revolving around Manitoba’s Orbit initiative, a trash-collection system launched in 1965. We caught up with Rewucki to chat about the MTS Stories from Home production, as well as its lead character, an Orbit receptacle currently residing on Broose Tulloch’s front lawn on Neptune Bay.

FREE PRESS: Let’s start with a chicken-or-egg question: which came first, you latching onto an Orbit or the brainstorm to make a film about Orbits?

JAMES REWUCKI: The idea for the film, 100 per cent. The doc came out in 2013 but I probably had the notion for it a good, five years beforehand. Like a lot of people my age, I grew up with these things and naively assumed it wouldn’t be too difficult to find one. That didn’t turn out to be the case, it took almost three years to track one down.

FP: Three years? Wow. In that case, where did you find the one we see in the film, the Orbit that’s presently at Broose Tulloch’s place?

JR: After running into one dead end after another, I reached out to Manitoba Highways to ask if they had any still kicking around. I got routed through six or seven different channels before I was put in touch with a guy in Brandon who said he had one sitting in a fenced-off compound, gathering dust. If I wanted to drive out there and get it, it was mine, he told me.

FP: There have been a lot of stories about Orbits being shot at, run over… even set aflame. What shape was yours in, the first time you laid eyes on it?

JR: It was a bit beaten up, definitely, but luckily my family is in the car business. I took it to the bodyshop where they slapped a fresh coat of Chrysler 300 white (paint) on ‘er. By the time they were done it looked almost good as new. Almost.

FP: My favourite scenes in your film are the ones featuring Peter Boychuk, the provincial employee who came up with the Orbit’s unique design in the first place. You must have been over the moon when you were able to track him down.

JR: To be honest, he was pretty excited, too. He mentioned how nice it was that, after all these years, somebody was interested in doing a documentary about his creation. He was super personable, answered all my questions… just a really nice guy and a joy to work with.

FP: Last question: after the documentary came out, is it safe to assume you heard from other Manitobans who grew up in the ‘60s, ‘70s and ‘80s, people who also have a soft spot for the Orbit?

JR: A lot of people did reach out, and what was funny is how almost to a person they remembered doing the same, nutty countdown we all did, when we saw the signs saying put your trash into Orbit in 10 seconds or whatever. I get the Orbit is a quirky, kitschy local kind of thing, so it’s not like I was expecting my film to get hundreds of thousands of views. It has been viewed thousands of times, though, and the people who’ve watched it definitely seem to get a kick out of it.

It turned out the Orbit-in-question belonged to his wife’s uncle James Rewucki, an independent filmmaker who acquired it in 2011 to “star” in a documentary he was working on titled Where Have All the Orbits Gone?  Rewucki made it clear the Orbit wasn’t for sale when Tulloch reached out to him a few days later. If Tulloch wanted it that badly, however, he would happily entrust it to him, free of charge. (That’s right, Tulloch is more guardian of the galaxy than owner.)

It was rather heavy and somewhat awkward to lift — it took three of them to load it and its four-legged metal base onto a covered trailer — but it was definitely worth the time and effort, Tulloch says, running his fingers along a small crack on the Orbit’s underside, a blemish he intends to correct “one of these days.” Almost from the moment he parked it next to a patch of petunias, neighbours began popping by to give it the once-over, and to comment how it was such a perfect fit, given the name of their bay.

“Nobody’s tossed any garbage in it yet, knock on wood,” he says, when asked whether it’s mistakenly been used it for its original purpose. That said, an anonymous donor did leave a marker behind last winter, a toy snow globe occupied by a pair of plastic aliens that Tulloch plans to secure to the top of the container again this Christmas.

“Aside from me wanting to touch things up a bit, I also know a fellow with a (computer numerical control) machine who intends to make a stenciled sign for the opening that would have my address on it, that a light could shine through from the inside, like a beacon,” he continues, mentioning Daisy, now four, gets a big kick out of running around it, oblivious to the fact not every house has an Orbit plunked near the front door.

“Other than that, the plan is simply to enjoy it and allow it to stand as a conversation piece for the entire neighbourhood. Everybody took up walking during COVID, right? You hear it all the time around here now: ‘Who wants to go for a walk to the Orbit?’” 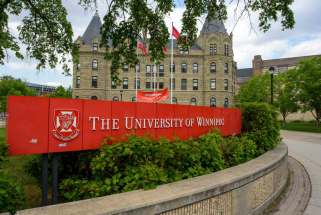 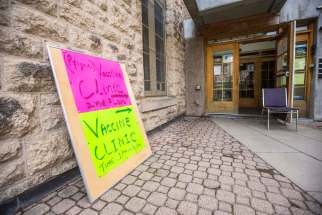 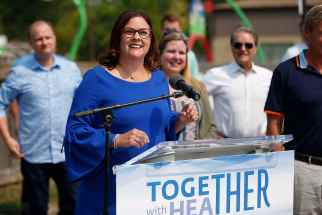 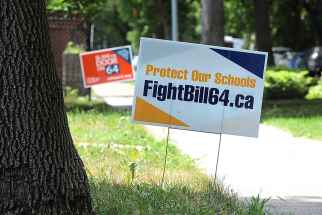 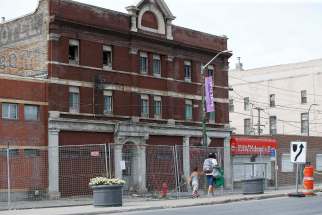 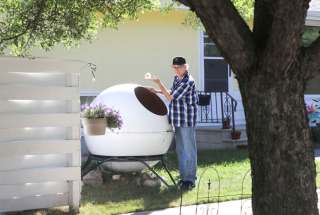 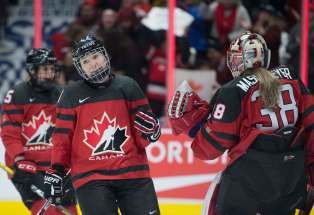