It’s great to have the Jets back, but they missed the net on logo

Can a pacifist cheer for the Jets?

Can a pacifist cheer for the Jets?

That’s the question posed by a friend on Facebook, following the unveiling of the new Jets logo.

For him, it’s a dilemma. He’s glad the team is back, but asks: “Fighter planes for a team logo? What’s wrong with this picture?”

What’s wrong for him is how the team adopted the silhouetted CF-18 Hornet on top of a stylized red maple leaf and air force roundel for its logo.

He’s not the only one who feels that way.

“I’m glad the Jets are back but I’m disappointed with the logo,” says Diane Cooper, chairwoman of Project Peacemakers, a local faith-related peace organization.

For her, the logo is a worrisome sign of how the image of the military in Canada is changing.

“We’re moving away from our peacekeeping tradition,” she says. “More and more we are defining ourselves as a nation by our wars — it makes me feel uneasy.”

Another person who feels uncomfortable with the new logo is Dan Dyck of Mennonite Church Canada.

For him, the new Jets logo is part of how sport is being used to “colonize the imagination of adults and children” to make the use of military force more acceptable to Canadians.

“It’s all part of a plan by the military to show that military solutions are the acceptable way” to resolve international problems, he says.

As an experienced public-relations practitioner, he also sees it as a brilliant marketing strategy.

“They’re doing it in ways we don’t even see,” he says of the military infusing its way into the consciousness of Canadians through things like hockey. “These things have a way of creeping in until nobody notices it anymore.”

To counter these kinds of messages, Mennonite Church Canada has launched a new initiative called Live for Peace. Among other things, it encourages churches to purchase billboard space in their communities to erect signs promoting peace such as “imagine life without war” and “love is stronger than hate.”

John Siebert is executive director of Project Ploughshares, a church-sponsored organization that seeks to create a secure world without war. He agrees with Cooper and Dyck.

There is a “clear and well-articulated policy to put defence and the role of Canadian Forces in forefront of Canadian policy,” says Siebert. “There’s nothing covert about it.”

According to Siebert, there is a “concerted effort to emphasize the role of the Canadian Forces and reconnect it with the Canadian public.”

One of the key ways the military is doing this is through sport, he says. “It’s a way to re-emphasize the role of the military in Canadian life and interaction with the world.”

For Siebert, this is very different from how Canada used to see itself as an actor on the international stage. Until recently, the dominant image of the military in Canadian life was through United Nations peacekeeping missions.

For a long time, he says, Canada was a leading contributor in the world to peacekeeping missions. Now, however, “we are no longer a leader,” he says.

A quick check of the United Nations website bears that out. Of 97,921 police, military experts and troops involved in UN peacekeeping missions today, only 191 are Canadians — and only 17 of those are Canadian Forces members.

In terms of how that compares to the contributions of other countries, Canada today ranks 53rd. Twenty years ago, it was Number 1.

Over that period, there’s been a 40 per cent drop in wars, Siebert notes, adding that this is due, in large part, to the work of peacekeepers. But Canada, he says, “has gone AWOL.”

For Siebert, the newfound emphasis on military force is the wrong way to go.

“The main reasons for war today are inequality, lack of political participation and lack of development, and the main way to help prevent conflict is diplomacy and development,” he says.

“These are things Canada could lead the world in. But in a period where Canada could be a superpower in diplomacy and development aid, we have chosen to be a junior member of military coalitions.”

Meanwhile, what’s a hockey-loving Jets fan who is also a pacifist — or who is simply uncomfortable with a logo that promotes the military — supposed to do?

One option is to only wear the old Jets jerseys. Another might be to join Hockey Fans For Peace on Facebook. The mission of the group, which was formed by people who opposed Canada’s involvement in Afghanistan, is to “urge the NHL and the mass media to stop using hockey games and broadcasts to promote support for the war.”

With only 247 members, it’s not likely to have much of an effect, especially here in Winnipeg.

But maybe that’s OK. As theologian Stanley Hauerwas said about being a peacemaker and another sport — baseball, in this case — “Being a Cubs’ fan and a pacifist are closely linked; namely, both commitments teach you that life is not about winning.”

Let’s hope that’s not true for the Jets nor for peaceful ways of resolving conflicts. I hope both do well this year. 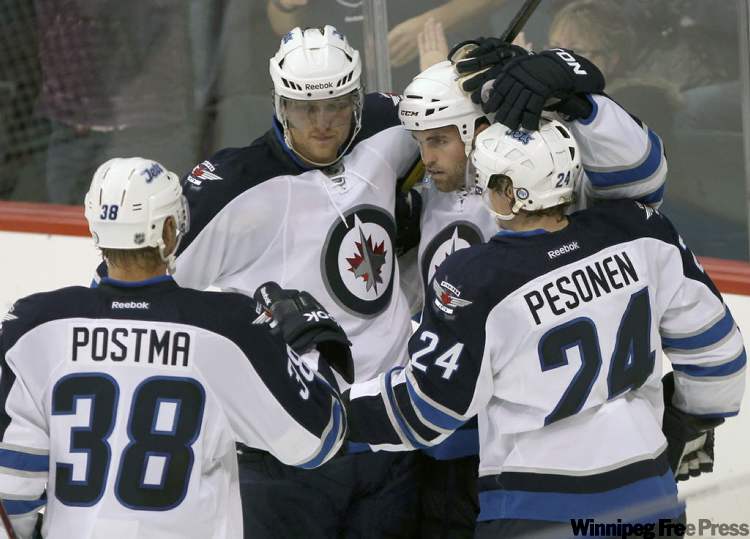