Don’t be fooled, however, into thinking there’s no action going on in the downtown rink’s basement offices.

Monday night’s late-breaking news that Ice Edge Holdings has stepped away from its negotiations with the city of Glendale didn’t change the no comment stance the organization has taken on the subject of the NHL returning to Winnipeg.

Don’t be surprised, however, if phone discussions and meetings were keeping True North chairman Mark Chipman and his people busy after the news began emanating from Phoenix.

"Talks have broken off," Ice Edge Holdings chief operating officer Daryl Jones told the Free Press late Monday night. "We were adamant about needing exclusivity in these negotiations and they haven’t provided it. I’m not totally surprised. We’ve been dealing with this for a while. We thought we had agreed to certain things and expected them in writing. That didn’t materialize."

Ice Edge had been working with Glendale city council to draft a lease agreement that was agreeable to both parties. Once a lease was agreed upon, Ice Edge had hoped to buy the Coyotes from the NHL, which purchased the club out of bankruptcy last fall.

Glendale city council is still expected to vote on a request to satisfy a number of NHL demands, including one that would see the city put together a financial guarantee to cover any losses incurred by the Coyotes for the 2010-11 season if the NHL is forced to operate the team for a second season.

"No comment," was all True North Sports and Entertainment communications director Scott Brown had to say when reached Monday and asked about the latest developments in Phoenix.

Ice Edge stepping out of the deal will leave Glendale city council with the choice of agreeing to cover losses for next season while the NHL tries to find a new buyer or to refuse the option and likely see the Coyotes relocated to a new city.

The hockey world is waiting to see what unfolds as the NHL and the city of Glendale battle in an attempt to keep hockey in the desert. True North is sitting off to the side and watching with interest like a duck on a pond, all calm on the surface but paddling furiously below the waterline.

Should the Coyotes become available for relocation, the NHL and True North are in position to act fast and come to a quick agreement. A deal to purchase an NHL team usually takes months but Chipman and his team have been working alongside the NHL for some time and the majority of work on such a pact has been done.

Chipman isn’t interested in making headlines about rumours and hypothetical situations. His goal is to secure an NHL team.

They’ve mostly made the correct moves and now find themselves close to a checkmate position. True North has made no secret of their interest in acquiring an NHL franchise if and when a deal is presented that makes sense.

Is that the Coyotes? Maybe. But at this stage, that deal sits in the hands of seven civic politicians in Glendale, Ariz.

Glendale city council will vote tonight to accept or turn down a list of demands put forth by the NHL. Chief among them is a guarantee to cover operating losses incurred by the Coyotes next season if the team cannot be sold to a group that will operate the team at Jobing.com Arena going forward.

It should be noted that any vote by Glendale city council does not end this saga one way or another. If they vote no to the NHL’s demands, the heat gets turned up and True North will likely find itself in position to try and complete negotiations with the NHL over the purchase of the Coyotes. An agreement could be finalized in a matter of days.

A yes vote merely gives Glendale city manager Ed Beasley the authority to attempt to satisfy the NHL’s conditions. There’s no guarantee that will happen and the window to get it done is days, not weeks.

The NHL wants "certain immediate financial commitments and assurances," and if they can’t receive them it’s believed the league will begin the process of selling the franchise to a group that would relocate the team. Winnipeg is at the top of the list of potential relocation markets.

That’s where Chipman and his group would come in. There have been reports that a purchase agreement between True North and the NHL is already in place but no one from True North has confirmed those reports.

More likely is a situation where Chipman and the NHL have discussed what both parties would need for a deal to be brokered and work has been done in the background to get each group in position to satisfy those needs.

A deal, such as purchasing and relocating an NHL franchise, can’t normally be done in a week.

True North, however, should they enter negotiations to purchase the Coyotes from the NHL, wouldn’t have the luxury of time to close a deal either if they want to play in the 2010-11 season.

Most of the details will have to be worked out in a short time and True North isn’t in the habit of being disorganized. Somewhere, in an office with several locks on the door, are True North’s NHL plans. You can be sure of that.

If you’ll recall, Chipman and Co. quietly went about their business putting together an arena package and made no noise about it until the project was shovel-ready with financing, land and contractors in place.

You can see the results of that method of operation by driving down Portage Avenue and checking out the MTS Centre, home of the AHL’s Manitoba Moose but capable of housing an NHL team.

Silence has been golden for Chipman in the past and to date his strategy has been sound.

Perhaps you’ll be able to see the fruits of that labour playing against the likes of the Montreal Canadiens and Toronto Maple Leafs as soon as this fall.

CAN WE AFFORD IT THIS TIME? The economics behind an NHL team
Rock and a hard place 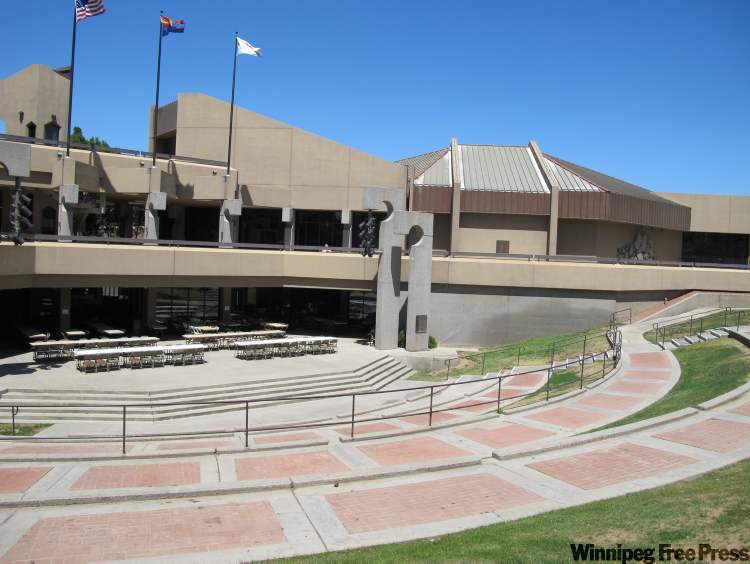