Thousands brave menacing skies to get glimpse of royal icon

Queen Elizabeth’s sixth and likely final visit to Winnipeg Saturday saw her hopscotch all over town, from the new airport to the old Government House, from The Forks to CFB Winnipeg.

With tornado watches that never amounted to much and thunderstorms that did, the biggest hitch of the day was the oppressive heat that sent many royal-watchers to paramedics suffering heatstroke. At one point, two young cadets at Government House linked arms to form a chair and carried a faint older woman through the crowd to medics.

The tour started just after noon with two firsts for the Queen — she was the first passenger to land at the new Richardson International Airport terminal and it was her first time disembarking directly into the terminal, like regular folk.

"There she is!" cheered several women as they spotted the Queen and Prince Philip walking though the glass bridge and into the airport.

Small in stature but swift-moving, the Queen walked the rope-line, paying special attention to some veterans. During a brief ceremony, while Philip whispered amiably with Premier Greg Selinger, the Queen signed a message for a time capsule that will remain in the airport until 2060.

Then it was on to Government House, where she lunched with 75 VIPs, including Mayor Sam Katz, Winnipeg police Chief Keith McCaskill and former premier Gary Filmon.

"For more than 125 years, this building has been a symbol of our living connection to the monarchy," said Lt.-Gov. Philip Lee, before handing the microphone over to Grand Chief Ron Evans, who offered a traditional grace in the Cree language.

After a royal nap, while 1,500 people gathered outside in the garden, the Queen emerged in a new outfit — a floral skirt, smart green jacket and a hot-pink hat that rivalled the other notable hat of the day, Gail Asper’s navy, netted number.

Among the girl guides, corgi owners and Folklorama ambassadors, the United Empire Loyalists stood out in their 18th-century period costumes. Although the group had a prime vantage point, they didn’t get to meet the Queen, but even a glance, it seems, said enough.

"She was looking at us a lot, so we’re thrilled she recognized us," said Cathy Darbell, wearing a long colonial cotton dress. "This was thrilling for me. It’s a special day."

If the event at Government House was a garden party, the gathering at The Forks was a rock show.

According to one official estimate, about 25,000 people converged on The Forks. What started as a hushed procession past the new human rights museum relaxed into a loud, friendly concert in the Queen’s honour.

And, if the Government House garden party catered to traditional monarchists, The Forks was tinged with politics and a bit of aboriginal flare.

Prime Minister Stephen Harper delivered a serious speech about Canada’s human rights record, echoed later in the Queen’s own speech, and Canadian Museum for Human Rights CEO Stuart Murray thanked Treaty One First Nations right off the hop for allowing the event on their traditional land. An aboriginal hoop dancer was the first act to entertain the Queen in her royal box, but few noticed his remarkable acrobatics. Almost every face was turned toward Her Majesty, who sat with her hands in her lap and her trademark black patent purse at her feet.

The rain held off all afternoon until the moment the royals waved goodbye from the stage at The Forks. The crowd gaily waved back, and then the skies opened up.

Fifteen minutes later, as an honour guard of Afghanistan veterans lined the tarmac of Canadian Forces Base Winnipeg, the Queen’s motorcade arrived.

A flag-waving crowd of about 150 military members and their families were there to see the monarch off. Standing at the fence, 13-year-old Brendon Demeyer clutched a handmade sign. "It’s my birthday, and all I want to do is meet the Queen," it read.

In the end, Brendon didn’t get his wish — as globs of rain poured down, Prince Philip opened an umbrella over the Queen’s head and walked her to the plane, where she bid goodbye to Mayor Katz and Premier Selinger. Then she climbed the steps to the Canadian government plane, turned once, and gave a final wave to the cheering crowd.

Slideshow of Queen's visit to Winnipeg 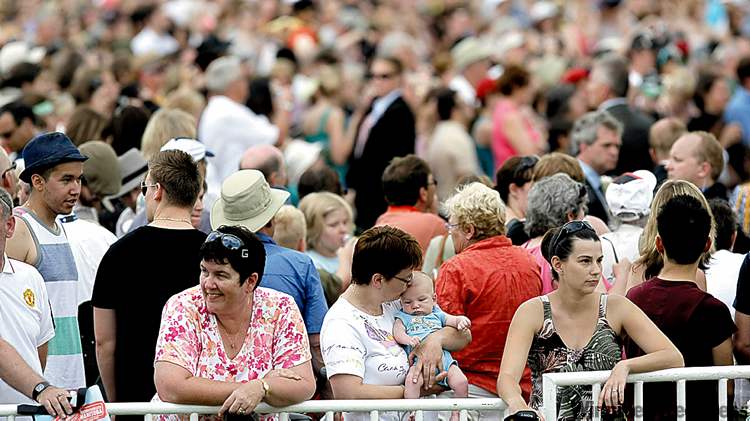