WINNIPEG — The Manitoba government once again delayed its plan to purposefully flood rural properties across a huge area southeast of Portage la Prairie.

WINNIPEG — The Manitoba government once again delayed its plan to purposefully flood rural properties across a huge area southeast of Portage la Prairie.

Emergency Measures Minister Steve Ashton said Thursday crews will wait until Saturday morning — at 6 a.m. — to cut through a dike along the Assiniboine River at the Hoop and Holler bend.

The cut will send flood water southeast, flooding an estimated 150 properties on 225 square kilometres of land.

On Thursday, Ashton tried to soothe the concerns of people whose land will be deliberately flooded.

“It will be moving fairly slowly. There are areas … that will not see any water for days,” Ashton said.

When the cut in the river’s southern dike is made, far less water will be released than first anticipated: 500 cubic feet per second (cfs) initially, flood officials said Thursday. That could be increased in 500 cfs increments daily as needed.

The province raised the spectre of the intentional flood on Sunday. The move is considered the lesser of two evils because doing nothing could cause the Assiniboine to spill its banks in other areas as well, swamping twice as much land and affecting 850 homes and properties in the rural municipalities of Cartier, St. François-Xavier and Headingley.

Provincial officials had earlier said the Hoop and Holler cut could happen as early as 8 a.m. Wednesday, then 2 p.m. Wednesday.

Excavators were already starting to dig out the dike Thursday as nearby residents scrambled to pile sandbags around their homes.

The main reason for the delay is the success provincial crews have seen in building up the Portage Diversion, increasing its capacity to 32,000 cfs, up from 25,000 cfs, Ashton said.

Crews remained at work to boost the capacity to 34,000 cfs. As a result, increasing amounts of water were being diverted into Lake Manitoba through the Portage Diversion.

“Our objective is to delay the controlled release as long as it is safely possible to allow us as much time as possible (to prepare),” Ashton said.

Another 50 homes on both sides of the Portage Diversion were issued precautionary voluntary evacuation notices Thursday. About 150 families had already been told earlier in the week to leave.

When the cut in the dike does happen, “it will pond up behind the first north-south road and then slowly spill over to the second one,” said Steve Topping, executive director of Manitoba Water Stewardship.

“And actually, as it progresses downstream, it will slow down.”

Homes that are above road grade may not suffer any flooding, officials said. People who own homes that are below the roadway have been advised to build up sandbag barriers to a level 60 centimetres above the road level.

Sandbagging continued at a furious pace south of Portage la Prairie as families, friends and volunteers prepared for Saturday.

Truckloads of sandbags arrived in the town of Newton, and were snapped up quickly.

“Everyone is doing what they can,” said Brad Dick of Newton Enterprises. “This gives us more time for us to prepare.”

Tanya Souque said if there is one bright spot in the stress of the past few days, it’s the coming together of people to help each other.

“I live in the danger zone and have spent three days sandbagging my house, families’ houses, neighbours’ and complete strangers’ houses,” Souque said.

“We are trying to move grain out and save anything possible. It is amazing how many family, friends and complete strangers who are not being affected in any way have come to help.”

One of the first properties to be hit by the artificial flooding — if the cut is made — is owned by quarter-horse rancher Ted Bray.

His farm is on the edge of the Elm River, which will be used to siphon off flood water from the Assinibine through the cut.

“I haven’t been sleeping,” Bray, 60, said of what could in store for him and his small farm. “There’s just too much to think about.”

“The support has been outstanding,” Bray said. “People from the community have been great. There’s such urgency. Everyone understands it.”

Bray said he was first told Tuesday morning about his house and farm being at risk. He’s moved his animals, but hasn’t had time to move his machinery to higher ground, not that there is any higher ground in this part of Manitoba.

“We’ve tried to do everything we can,” he said, as he and son John beefed up the sandbag dike around the house.

“But we’ve just been so busy.”

Bray and others want a firm commitment from government that they will be compensated 100 per cent for their losses, and what they’ve spent protecting their properties.

“I spent $400 on lunch to feed everyone who helped me the other day,” he said. “Will I be compensated for that?”

Should the cut in PR 331 be made, it’ll take a day or so for Assiniboine River floodwater flow east down the Elm River towards Bray’s farm.

“They say they’ll be able to control it, but if they can’t, it’ll be a disaster,” he said.

“I don’t think they really know for sure what will happen,” Bray said.

Bray’s farm, about two kilometres south of Oakville, was last flooded in the 1950s, before the province built the Assiniboine Diversion at Portage La Prairie.

Several kilometres north of Bray’s propery, the situation is just as critical for hundreds of soldiers from Shilo and Edmonton. They’re working furiously to strengthen weak spots in a dike built several weeks ago along the Assiniboine on either side of PR 430.

The highway has been blocked off and turned into two landing zones for half a dozen helicopters to continuously ferry sandbags, loaded in cargo nets hooked underneath, to soldiers from the First and Second Battalions of the Princess Patricia’s Canadian Light Infantry working on the dike below.

Soldiers from Shilo starting working on the dike several days ago; more from Edmonton arrived Thursday.

Cpl. Mitch Wilson was one of about two dozen reservists working to protect a home.

The 19-year-old from Winnipeg had been shovelling heavy sand for several days and was running on five hours sleep, but still had a smile on his face.

“It’s tiring but we make it fun,” he said. “I think people really appreciate the help. It feels good to be out here and help people out. I feel proud to be a part of it.

“It feels good to know I’m helping out Canadians.”

Also on Thursday, Ashton said recent heavy rains in eastern Saskatchewan and western Manitoba are causing flood forecasters to predict a new higher crest along the Qu’Appelle River near the western Manitoba town of St. Lazare.

He said the community is working to raise its dike by a foot. 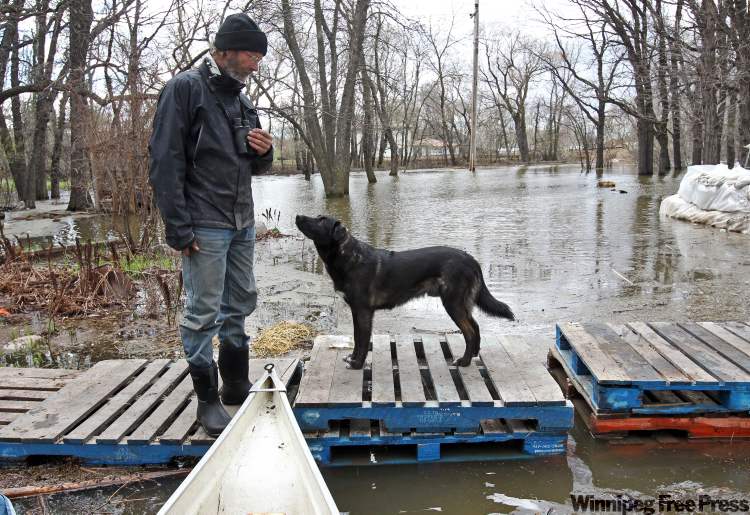 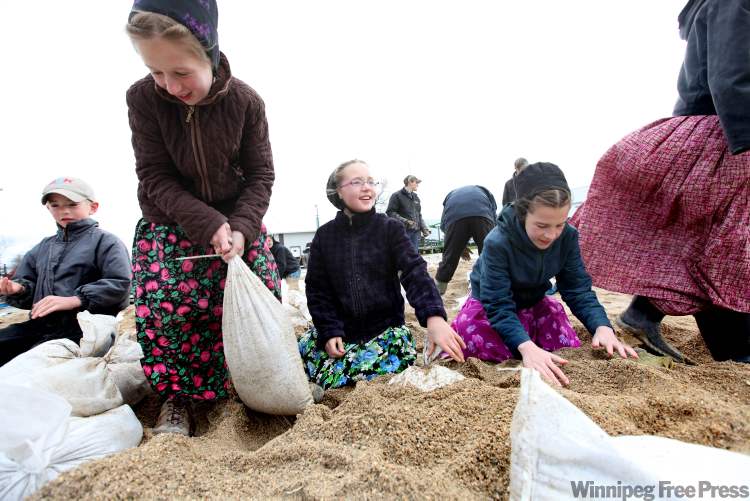 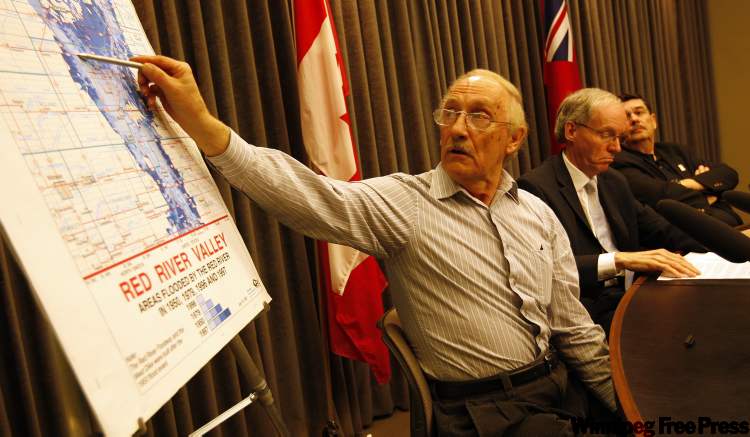 Theories abound on how Hoop and Holler got its name 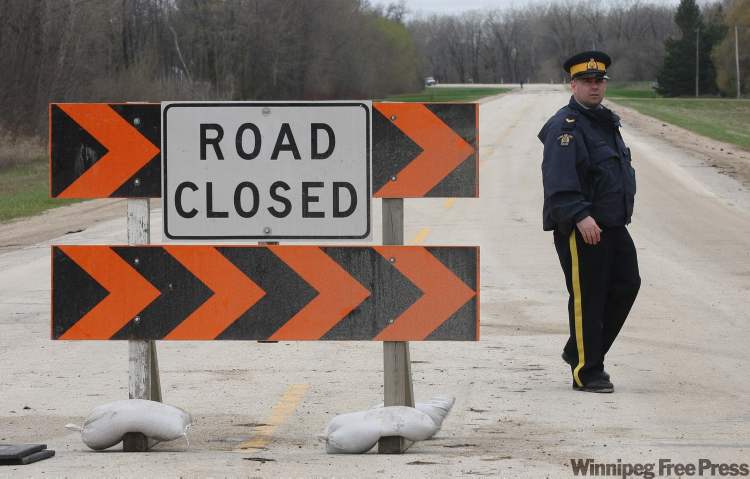 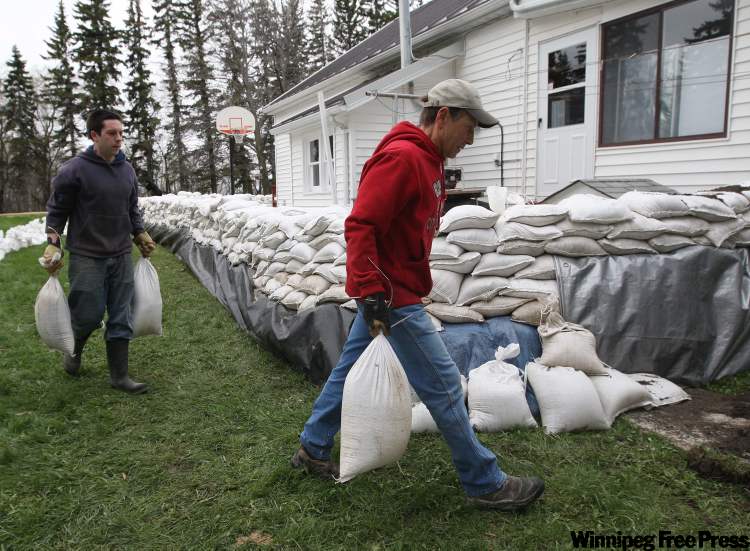