Back in 1980, Bill Norrie was Winnipeg's new mayor, the Jets were completing their first NHL season and a young commerce graduate named Bill Menzies started working on a bus-corridor project for Winnipeg Transit.

Back in 1980, Bill Norrie was Winnipeg’s new mayor, the Jets were completing their first NHL season and a young commerce graduate named Bill Menzies started working on a bus-corridor project for Winnipeg Transit.

Norrie served five terms before retiring in 1992. The original Jets played 15 more seasons before moving to Phoenix in 1996.

And on April 8, 2012, the 3.6-kilometre first leg of the Southwest Transitway will open in Winnipeg, allowing buses travelling between downtown and southwestern neighbourhoods to bypass traffic in Osborne Village and on the northern stretch of Pembina Highway.

“One of the reasons I joined Winnipeg Transit was this project was on the books,” said Menzies, now 58 and the manager of service development for the city’s transit utility.

The Southwest Transitway, until recently known as the Southwest Rapid Transit Corridor, could be seen as a life’s mission for Menzies, who has spent decades quietly working behind the scenes on Winnipeg’s rapid-transit plans.

The very model of a dutiful public servant, Menzies has never lobbied publicly to complete the project or whispered so much as an unkind word to reporters about a city council that has approved, cancelled and re-approved a corridor first envisioned in 1976.

That same restraint was on display this week as Menzies finally had the chance to talk about the opening of the busway, which will result in the largest Winnipeg Transit schedule overhaul in decades — changes to 18 existing routes and the creation of new ones.

Unlike the unwittingly ironic Winnipeg Transit advertisements that herald the delayed arrival of rapid transit as “your city in fast forward,” Menzies touted not the time savings afforded by the modest initial leg, but the consistency of service, especially in and around Osborne Village during the morning and afternoon rush hours.

“The biggest advantage of the transitway is the reliability,” said Menzies, stating any trip along the transitway between Queen Elizabeth Way near The Forks and Jubilee Avenue near Pembina Highway will take seven minutes, including stops at three new transitway stations.

Ten bus routes will use the entire transitway for trips between central and southwest Winnipeg. Among them is a new No. 185 express bus to the University of Manitoba that includes a loop through Osborne Village, picking up some of the slack from reduced coverage on the No. 60 Pembina route.

Another three bus routes will use the transitway between Queen Elizabeth Way and Warsaw Avenue before exiting onto Pembina Highway on their way to Grant Avenue or Linden Woods.

A further four routes have been amended to connect with rapid-transit routes, while a brand-new No. 99 Downtown-Osborne Village route has been created to continue to cover Smith and Donald streets.

“There’s lots of service,” said Menzies, whose agency is predicting a 20 per cent rise in transit ridership as a result of the corridor — a figure some politicians doubt.

During off-peak hours, when Winnipeg’s streets are not congested, any time savings provided by the transitway may be imperceptible. During the morning rush hour, the transitway will cut eight minutes off a non-express trip between downtown and the University of Manitoba — and only two minutes off an express trip, Menzies said.

The time savings will be more noticeable when weather or traffic accidents bring vehicle traffic to a standstill in and around Confusion Corner, he added.

“Right now, at peak hours, it can take buses 25 minutes to crawl through Osborne Village,” Menzies said. “We’ll be bypassing all of that.”

The question on the mind of many Winnipeg taxpayers, however, is whether it was worth $138 million to achieve these modest conveniences. And the ultimate answer, of course, lies in whether the city, province and Ottawa can agree to fund a second phase of the transitway that would extend to the University of Manitoba — or even upgrade the entire route to light rail.

In the meantime, Winnipeg Transit must contend with educating transit users about the coming route changes — and dispel the misconception that transit users must get on and off buses at either end of the corridor.

On Thursday morning, some transit passengers waiting for buses at Confusion Corner remained unclear on how the transitway will operate. University of Manitoba student Sukhpreet Lotey, for example, said he isn’t sure whether eight minutes of saved time will make much difference to his daily commute from his home in Tyndall Park.

Other users who are aware of the transitway expressed annoyance about having to change their ridership habits. Patrick Fuller, a mandolin-playing busker who often travels between downtown and southwest Winnipeg, said he doesn’t like having to walk an extra block south to the Osborne Station.

“I don’t like it at all. Elderly people will have trouble getting there, too,” he said. “But getting buses off the street might be a good thing, and I see why they’re doing it. The streets are so narrow.”

During the first few weeks of the transitway’s operation, Winnipeg Transit staff will circulate around downtown stops and be present at the new stations to offer route advice in person, Menzies said.

Frequent transit users will adjust to the new schedule in two or three days, but University of Manitoba students may not catch on until the resumption of classes in the fall, he said.

As for a jump in ridership, only time will tell.

“We’re not saying we’re going to be the only mode of transportation. We’re just trying to give people more options,” Menzies said.

NEXT SATURDAY: The long road toward rapid transit in Winnipeg — and what lies ahead.

Some concrete facts about the Southwest Transitway, the first completed stretch of Winnipeg’s rapid-transit network

Length: 3.6 kilometres for the first phase, which opens Sunday, April 8.

First-phase route: From Queen Elizabeth Way near The Forks to Jubilee Avenue near Pembina Highway.

– Purpose: Initially, to allow buses travelling between downtown and southwest Winnipeg to bypass traffic in Osborne Village, at Confusion Corner and along the northern stretch of Pembina Highway. May eventually be extended south to University of Manitoba. May also be upgraded to light rail corridor.

–  Construction: 2009 to 2011, with final tinkering to transit stations early this year. The work included 31,000 cubic metres of concrete, 300 kilometres of reinforcing bars and 500 tonnes of girders, structural beams and trusses. Sections of Donald Street and Stradbrook Avenue were moved to accommodate the corridor and a new pumping station was built to aid land drainage.

–  Major features: A new bridge over Osborne Street, south of Confusion Corner, and a 350-metre tunnel below the Fort Rouge Yards. Winnipeg Transit claims the tunnel is the longest for motor vehicles in Manitoba.

–  Bus routes: Seven existing and three new bus routes will use the entire transitway. Three routes will also utilize a portion of the transitway. Another four are being modified to connect to rapid-transit routes. A new Route 99 will run between Osborne Village and downtown to replace routes shifted onto the transitway.

–  Rapid-transit stations: New stations at Harkness Street, Osborne Street and Morley Avenue in Fort Rouge, plus a Balmoral Street terminus on the University of Winnipeg campus.

–  Bike lockers: Eight enclosed lockers for bikes at Osborne Station; four each at Harkness and Fort Rouge stations. Cyclists must supply their own locks. Winnipeg Transit is developing a protocol for cutting off locks left too long.

–  Bike-and-pedestrian paths: East of the transitway, the South Winnipeg Parkway has been upgraded from The Forks to the intersection of Osborne and Glasgow in Fort Rouge. There’s also a new path from Jubilee Avenue to Osborne and Glasgow. West of the transitway, there’s a shared sidewalk from Osborne Station to The Forks. A gap remains at the Osborne underpass, forcing cyclists to dismount. The path may only be widened when CN replaces its rail bridge.

–  Emergency access: Ambulances, police cars and fire trucks may use the transitway during emergencies.

–  Unauthorized access: Anyone who drives, walks, in-line skating or rides a bike or skateboard on the transitway will be subject to a $500 fine.

How rapid is rapid?

Winnipeg Transit says the main benefit of the Southwest Transitway will be reliability of service, as it will take seven minutes to travel from one end of the 3.6-kilometre corridor to the other, including stops, no matter what time of day. This means the time savings over buses on streets will be noticeable during rush hour, but almost imperceptible at other times of the day.

Here are the projected time savings for morning rush-hour trips on two routes — one regular, one express — from the downtown intersection of Graham and Donald to the University of Manitoba: 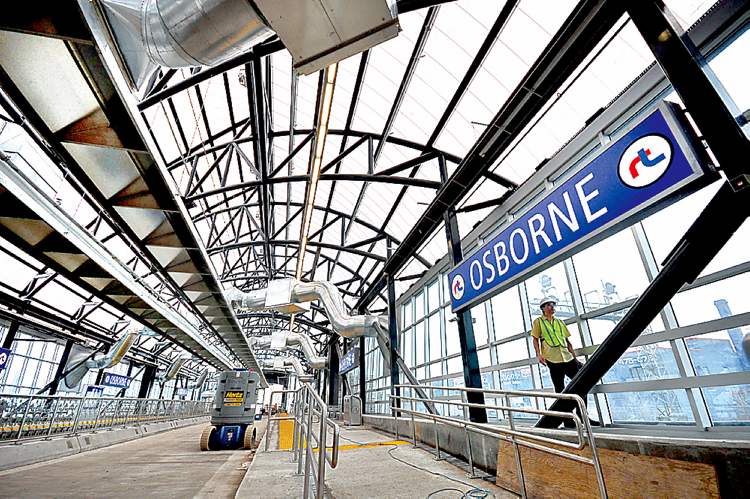 84 and 86 Whyte Ridge: Extended to Pembina and Windermere to connect to rapid-transit routes.

95 Tuxedo-Riverview: Extended to Pembina and Windermere to connect to rapid-transit routes.

99 Downtown-Osborne Village: New route running along Smith/Donald streets and Stradbrook/River avenues to make up for buses moved on o transitway.

More info on the web: