PHILADELPHIA -- Maybe a guy becomes immune to it after slogging away in training rooms all over the hockey map for more than a decade.

PHILADELPHIA — Maybe a guy becomes immune to it after slogging away in training rooms all over the hockey map for more than a decade.

You see, coaches yell and scream, rant and rave all the time. And so when Winnipeg Jets head athletic therapist Rob Milette first heard somebody holler “Mullet!” — his nickname — just after noon on Thursday in Raleigh, N.C., it just seemed like another mini-crisis was unfolding on another regular day at the office.

Practice was over, after all, and only a handful of players who weren’t dressing for that night’s game against the Carolina Hurricanes were putting in extra work out on the ice.

“Some of the coaches started screaming for the medical staff, but they scream for us every day, whether it be for a tape job or for a water bottle,” Milette said Friday. “They always scream the same way, so you’re never really sure what’s going on.

“But when they start yelling for me to get out there quickly, I just started running through the room. And my first instinct was to grab some towels as I ran by.”

What Milette came across when he sprinted onto the ice at PNC Arena in Raleigh was both gruesome and a first for him. “I’ve been doing this for 12 years,” he said, “and that’s easily the most grave incident I’ve been a part of, for sure.”

Lying in the crease at one end of the ice was Jets defenceman Zach Redmond, his own blood already pooling around him. Lee Stubbs, the team’s strength and conditioning trainer and assistant athletic therapist, who had been on the ice working with injured goaltender Al Montoya, was already down on the ice applying pressure to a gaping wound on Redmond’s inner right thigh.

Perry Pearn, one of the Jets’ assistant coaches, had taken off his track-suit jacket and it was fashioned into a tourniquet around Redmond’s leg. Mark Grehan, the Jets’ assistant equipment manager and also a certified athletic therapist, was also in the mass of humanity and applying pressure to Redmond’s injury. So, too, was Jet winger Anthony Peluso and some of the therapists who work for the Hurricanes.

Seeing all the staff on scene, Charlie Huddy, the veteran coach and long-time NHLer who had been on the ice working with the players, skated to the nearby blue-line, kneeled down on one leg and began to pray.

ANTTI MIETTINEN has been a pro hockey player since the turn of the millennium in Finland, Russia, the American and National Hockey League. He’s suited up for 517 NHL games with three teams — the Dallas Stars, Minnesota Wild and Jets — and at age 32, has fashioned a solid career as a respectable two-way player.

But it was during the condensed Jets’ training camp in late January that Miettinen slipped on a stick at practice and crashed into the boards, suffering a concussion. He was just given the green light to return to work a week ago and accompanied the team on their current five-game road trip, crossing his fingers his 2013 debut would be soon.

But, as is the custom in hockey, the players who are not scheduled to be in the starting lineup are required to put in some post-practice work. Miettinen, after all these years, knew the drill on the drills.

“We were doing one-on-one battles in the zone and I was trying to wrap around from behind the net and use the goal as a screen and for Zach to stay a bit behind me,” Miettinen said Friday, not long after finishing an optional skate at the Wells Fargo Center in Philadelphia, where the Jets play this afternoon.

“I don’t know if he tripped on the netting or something… he tried to go between me and the net. The next thing I know, as I’m taking a stride, I’m stepping on him. It happened so fast I had no idea his leg was under there. I turned around right away and saw there was quite a bit of blood coming out. There were a bunch of guys on the ice who rushed in and put pressure on it right away.”

Still visibly shaken by the incident, Miettinen was asked about how tough the last day or so has been for him.

“Compared to what he had, I shouldn’t obviously think that I had a bad day,” answered Miettinen. “But of course I feel bad for what happened. My body felt like spaghetti (Thursday). I went to see him at the hospital… I don’t know if he remembers that too well, but it was good to see him talking and stuff like that.

“It’s an unfortunate accident. I feel pretty bad about what happened. I hope everything goes well for Zach. For the short time that I’ve known him, he’s got a great will and spirit. I just hope the healing process goes well for him.”

ANTHONY PELUSO’s practice jersey was soaked in blood around the arms as he left the ice Thursday, not long after Redmond had been rushed away via ambulance. Peluso is a big man at 6-4, 234 pounds, but he’ll readily admit this: It takes a lot of strength to try and hold a teammate’s leg together in an effort to stop the blood from spurting.

“You start feeling your arms get tired and your hands get tired,” Peluso said Friday. “But Zach’s been a close buddy of mine since we’re both (living) at the hotel (in Winnipeg). It’s a teammate. You try and do everything you can for him.”

His quick reaction was one of many that helped save Redmond. When Peluso saw his buddy go down and instantly begin showing signs of pain and bleeding, he rushed to a nearby bench to grab a towel.

Peluso, FYI, has no first-aid training. But he does have some experience.

“As a kid… I’m accident-prone a little bit,” he said. “So whenever I cut myself, my parents always told me to put pressure on it or rinse it with water. Not much thinking time. The reaction time was minimal.

“There was nothing that happened that you could tell how serious it was. But the fact you see one of your teammates like that, in pain, it sets off a trigger.”

ZACH REDMOND’s rookie NHL season may be over, but here is the bigger picture today: He is lucky to be alive. Miettinen’s skate blade not only sliced through Redmond’s hockey pant leg — above the Kevlar socks he was wearing — it severed the femoral artery and the popliteal vein.

“Basically,” head athletic therapist Milette explained, “every main blood vessel in your leg that supplies blood to that lower limb was in trouble.”

Seeing that so many were applying pressure to the wound, Milette and assistant athletic therapist Brad Shaw called an ambulance, helped get Redmond on the spinal board and applied oxygen.

Critical in the early going was this: Redmond had to remain conscious. If he had passed out, the staff on scene would have been forced to use a defibrillator to keep his heart pumping.

“Not enough credit is going out to Zach Redmond for staying conscious with us, talking to us,” said Milette. “He was answering our questions, he was talking with us. He was very alert. I can’t say enough about the guy. He was unbelievable (with) the trauma that he went through and how composed he was during the process.

“He lost a lot of blood there and his heart was definitely struggling. We were monitoring his vitals, checking his pulse. His pulse was really weak and really slow. He was pale. He was starting to tell us he was getting thirsty and that told us he had lost a lot of blood.”

Milette estimates Redmond lost a litre to a litre and a half of blood. The average human body has about 5.6 litres.

It took surgeons at a hospital in Raleigh three hours to complete their work, including taking a piece from another vein to splice it into the femoral artery. Blood vessels, surrounding tissue and muscles also needed repair.

Stubbs stayed with Redmond at the hospital while the team, who had been given progress reports on their teammate’s status by the coaching staff, returned to Raleigh’s PNC Arena and skated to a 4-3 win over the Hurricanes.

By night’s end, Redmond was repeatedly asking for updates on how his teammates were doing.

He will likely remain in Raleigh for the next week or so. His family is scheduled to join him there from Michigan and his agent, Scott Norton, plans on visiting, too. The latest report the Jets got from Stubbs on Friday was that Redmond was sore and fatigued after losing so much blood, but recuperating well.

The recovery period is unknown. And, obviously, so is the impact Redmond’s injury will have on his promising career.

“We can only hope his recovery goes just as well as the surgery went,” Milette said. “It’s way too early to tell. There were so many things damaged it’s impossible to tell how his recovery is going to be.” 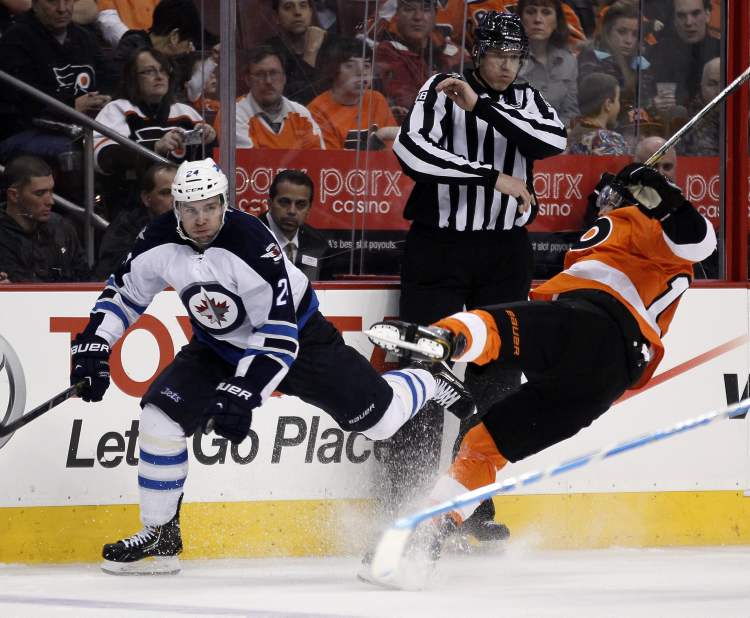 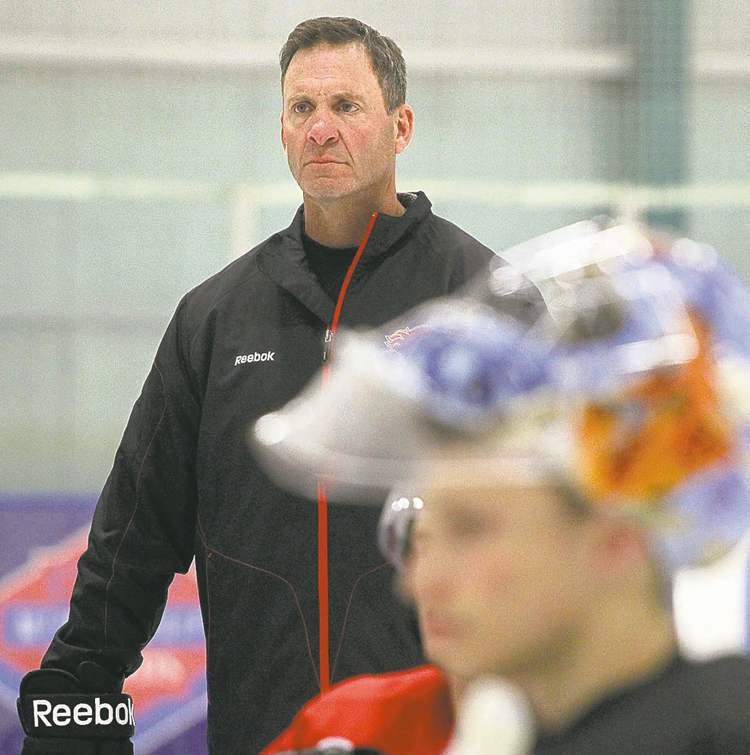