Byfuglien’s game a roller coaster, but he feels good

WINNIPEG — Winnipeg Jets defenceman Dustin Byfuglien in not so many words today asked for calm regarding his game.

WINNIPEG — Winnipeg Jets defenceman Dustin Byfuglien in not so many words today asked for calm regarding his game.

The team’s most-used player — he averages more than 24 minutes per game — has infrequent conversations with reporters but engaged a group after today’s 30-minute practice at the MTS Centre before the Jets departed for New York and the start of a three-game road trip Monday night against the Rangers.

About himself and then his game, Byfuglien said: “Pretty good I guess. It’s a grind but everything’s feeling pretty good.

“It (his game) is a bit of a roller coaster, but for the most part I feel pretty good. Pucks don’t go your way, bounces, you fight it a little bit, but I seem to be able to come back and have a good shift afterwards and not let it hang on you.”

Byfuglien said the team’s push is forward, not looking back, even though it has dropped its last two games, allowing some chasing teams to get closer.

“We’ve just got to keep the game simple, keep pushing forward, and not let a couple losses get us down,” Byfuglien said. “We’ve got to jump back up and continue to get some wins and play a solid game, every 60 minutes.”

Byfuglien, who has six goals and 21 points with a plus-one this season, was asked about his own recent inconsistencies.

Jets coach Claude Noel said after Saturday’s home loss to Carolina that Byfuglien’s been “up and down.”

He expanded on that somewhat today.

“Players never go into any stretch of time trying to be inconsistent,” the coach said. “They’d like to be consistent, love to be able to present their A game but it doesn’t work that way. Certain things happen during games. That’s the biggest challenge for any pro player, try to be steady and consistent.

“He understands the implications of a good game versus not. So he’s doing his best. And hopefully he puts his best foot forward in these next 12 games.”

The coach offered a strong hint that the Jets’ fortunes will have plenty to do with Byfuglien’s performance.

“He’s very important because when he goes, we go pretty good behind him,” Noel said.

Today’s Easter Sunday practice didn’t last long and was conducted without defencemen Ron Hainsey and Toby Enstrom and forwards Blake Wheeler, Bryan Little and Evander Kane. Noel said all were excused for “maintenance” reasons… The Jets have 12 games left, five on the road and seven at home. 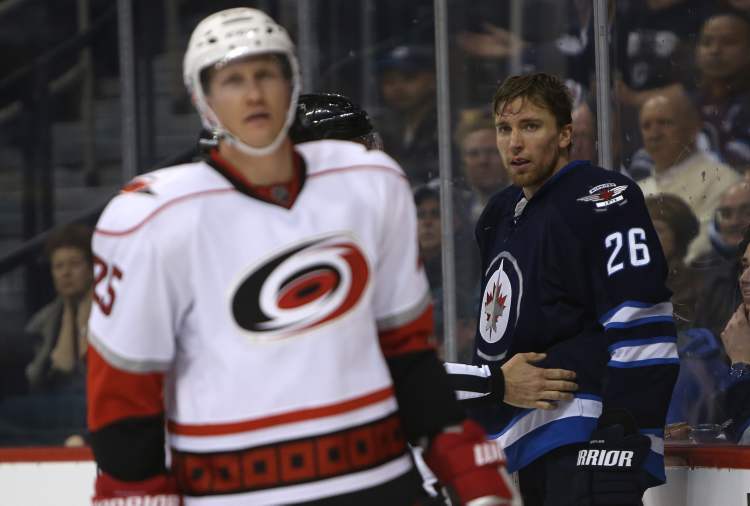 A bit of polish and Buff could shine