First came the ice and destruction.

First came the ice and destruction.

Then the volunteers cometh.

Hundreds of local residents arrived by the dozens on Saturday with backhoes and bulldozers and wheelbarrows — helping to chip away massive ice floes that on Friday night destroyed 12 homes and damaged another 15 along Ochre Beach, located 20 kilometres east of Dauphin.

“Today was just a work day,” RM of Ochre River deputy reeve Clayton Watts told the Free Press Saturday night. “They got a lot done. They had an unbelievable amount of people working out there; all kinds of friends and people from around other beaches.”

“Everybody was pitching in to help them (residents) make it through the day,” Watts said. “It was a good community effort. It’s typical. Everybody just helps out.”

According to provincial Emergency Measures Organization officials, a total of seven permanent homes were literally crushed by the ice that rose up within minutes from Lake Dauphin around supper time on Friday, pushed by north winds gusting up to 60 kilometres per hour.

Doug Davis had just taken a shower and was about to sit down on his couch and relax at his home along Ochre Beach on Friday night.

Then he heard the ice coming.

Within the next five minutes, a wall of ice rose from the lake so powerful that it plowed though the Davis’s two-storey home, pushing furniture from one bedroom into another. It pushed the bathroom tub and vanity into the hallway.

The Davis family wasn’t alone. In all, 27 homes and cottages were damaged or destroyed – although no injuries were reported.

A local state of emergency was declared in the municipality, and residents along the beach were evacuated on Friday night.

The provincial Emergency Social Services were called to the scene Friday night to assist residents in finding temporary lodging. Structural experts from the Office of the Fire Commissioner were also on hand to determine whether some residents could be allowed to attempt clean up or collect belongings. On Saturday, the residents and volunteers were allowed to return to the area and begin digging the ice on homes that were declared structurally stable.

All for a natural event that was over in just 15 minutes.

“They (homeowners) heard it before they saw it (the ice) coming up their decks,” Watts said. “Then it came right in their front windows. It was just a matter of minutes. Fortunately, no one was hurt. We were very lucky.”

On Saturday morning, Watts was standing on an adjacent beach, looking over the damage.

“The ice is up taller than the cottages and homes,” he said. “It kind of dwarfs them.”

“This is nothing you can predict,” Watts said. “Water, you can see it coming up. There’s nothing you can do to prevent this. Sometimes, it’s just the luck of the way the wind is blowing. You can just hope for the best, and the best was no one got hurt.”

However, Watts said many of the cottagers and home owners affected by the ice wave were also just recovering from severe flooding in 2011. In fact, a few of the homes were newly constructed.

“That’s what’s so devastating,” he said. “These people have rebuilt their homes and got their lives back together. Now they have to start over again.”

In fact, the Davis’s were just in the process of seeking out contractors to rebuild the foundation of their home, due to lingering flood damage.

Instead, on Saturday morning, Elaine was surveying an entirely different dilemma.

“We’re looking at a front room filled ice and we’re trying to shovel it out,” she said. “There are huge chunks. It breaks my heart to see our house….everybody’s houses. The feeling is indescribable. She’s gone.

“But you salvage what you can. There’s not much a person can do. You just have to take a deep breath and do what you have to do.”

Davis was even more concerned about weather reports on Saturday that high winds were being predicted this weekend.

“Mother nature’s not done with us yet,” she said. “You never know.”

However, on Saturday night, the winds had begun to die down, Watts said. 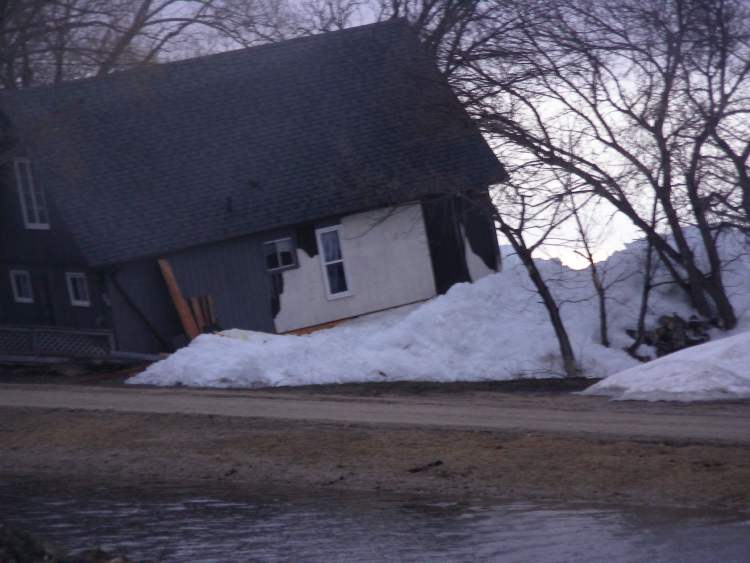