Alouettes come back to beat Bombers 38-33

It started inauspiciously enough for the home side – imagine a ship christening where the champagne bottle swings right through the hull – but in the end the Winnipeg Blue Bombers and Montreal Alouettes did up the debut of Investors Group Field in style.

It started inauspiciously enough for the home side – imagine a ship christening where the champagne bottle swings right through the hull – but in the end the Winnipeg Blue Bombers and Montreal Alouettes did up the debut of Investors Group Field in style.

The two clubs served up an absolute dandy in the first-ever game in Winnipeg’s spiffy new stadium Thursday night, the only flaw – at least for Bomber faithful – was the result in the Canadian Football League season opener: Alouettes 38 Bombers 33.

Down 14-0 before the game was five minutes old, the Bombers rallied in the second half, only to sputter when it mattered to Anthony Calvillo & Co.

Indeed, the Bombers overcame a 23-13 deficit at halftime by out-scoring Montreal 20-1 in the third quarter, but then had no gas left to take it to the finish line.

Calvillo, the 40-year-old Bomber killer, connected with S.J. Green on a 42-yard touchdown early in the fourth quarter, Sean Whyte added a pair of late field goals and the Als defence then stymied the Bomber attack until the final gun.

As a result, Winnipeg opens at 0-1 and the Als go to 1-0. These same two clubs meet next Thursday in Montreal.

“We got down in the first half by turning the ball over,” said cornerback Jovon Johnson. “But we bounced back and put ourselves in position to win and that’s all you can ask for. We shocked a lot of people… I don’t think nobody even expected us to be in the game after being down 14-0. We know we can beat that team, it’s just a matter of us limiting our mistakes and hopefully we get some breaks next time.

“(Coach Tim Burke) just told us to stay on course, stay on track. That’s a good football team we played against but we can’t turn the ball over. We’ve got to put ourselves in the position to win because the margin of victory is that small.”

The Bombers got TDs from Clarence Denmark and Chris Matthews on passes from Buck Pierce with Demond Washington providing a spark with an 80-yard punt return score. Justin Palardy was a perfect three for three in field goals, with a long of 48.

Calvillo wasn’t perfect, but he was deadly when it mattered, completing 20 of 35 passes for 264 yards with one TD and one interception. Montreal forced five Bomber turnovers, including three interceptions by Pierce, who finished 19 of 34 for 258 yards.

The game started disastrously for the home side, as Pierce was intercepted on the Bombers very first play from scrimmage by Geoff Tisdale. Three plays later Chris Jennings was dancing into the end zone for a three-yard score, the first touchdown in IGF history. It got worse less than two minutes later when Mike Renaud’s 39-yard punt was returned 78 yards by Tyron Carrier for another TD and a 14-zip lead for the visitors less than five minutes into the game.

But to their credit, the Bombers came to life on their next possession as a Pierce-to-Denmark 45-yard strike set up a Palardy 35-yard field goal. Winnipeg would cut into the Als’ lead late in the quarter when a Calvillo pass bounced off Brandon Stewart’s foot into the arms of Washington, who returned the gift 49 yards to the Montreal six-yard line.That mistake was capped off two plays later when Pierce hit Matthews, playing on a bum ankle, for a three-yard TD.

After the emotional roller-coaster start, things slowed considerably in the second quarter. Montreal got 36 and 35 yard-field goals by Whyte to jump ahead 20-11 and then conceded a safety that cut the gap to 20-13. That’s when Calvillo went to work, driving the Als 78 yards on 11 plays down to the two-yard line before having to settle for a Whyte nine-yard field goal on the final play of the half.

The Bombers would roar back into the contest in the third quarter, out-scoring the Als 20-1 as Pierce hit Denmark and then Washington returned the punt for a TD that gave the Bombers their first lead of the game.

But as fans have seen so many times before, that’s when Calvillo and the Als defence went to work. The Als pivot did just enough to move the club – he connected with Green for the one score while driving Whyte into position to two of his fourth-quarter field goals. All told, Whyte was a perfect five for five.

“We really killed ourselves in the first half. We had three big turnovers in the first half that spotted them 14 points real early. We were battling from behind. We came out and put up a lot of points early in the third but we’ve got to continue to do that.

“We got stuck down there in our own end in the fourth quarter and never could get out of there and gave them point after point. We’ve got to get better.”

Before the kickoff the pre-game ceremony was done up right by the dignitaries and legendary players.

A half hour pre-game show to open the new facility, co-hosted by Chris Walby — one of the greatest to ever wear Bomber colours – and Laura Lussier, was capped by a very cool moment for the club’s long faithful:

Legendary receiver Milt Stegall catching a perfect spiral from Matt Dunigan and then racing to midfield to bust through a gold ribbon.

The opening ceremonies featured all the usual pomp and circumstance, including a historical video montage accompanied by the University of Manitoba orchestra and bag pipes, and some of the folks instrumental in getting the facility built like David Asper and Mayor Sam Katz. There was a video message from former Bomber head coach Mike Riley from his office at Oregon State and a number of ex players, including Lyle Bauer, James Murphy, Bob Cameron, Trevor Kennerd, Paul Bennett, Wade Miller, Rod Hill, Paul Robson and Pepe Latourelle were all on hand at centre field, along with Canadian Football League commissioner Mark Cohon.

The loudest cheers came with Ken Ploen, wearing his old No. 11, entered the stadium with the game ball, capping up the Kickoff Run that weaved through the province and for Stegall, who had the place hopping as he bounded down the field in full uniform.

And, predictably, the Alouettes received a chorus of boos as the entered the stadium. But most important for the visitors, they exited with a ‘W.’ 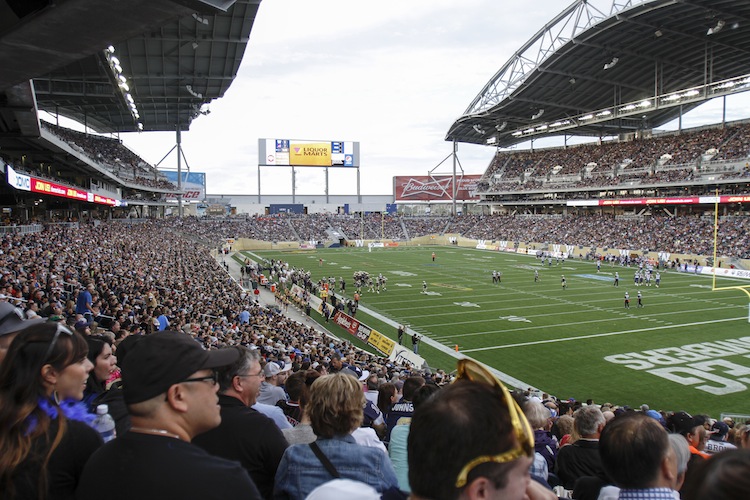 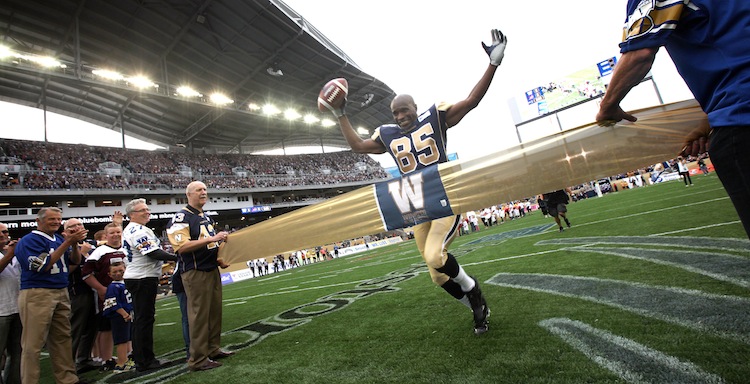