The game plan: Don’t take blame for anything

You can tell a lot about people by the way they respond to a crisis.

You can tell a lot about people by the way they respond to a crisis.

For example, when water from melting snow flooded luxury suites at the new Investors Group Field, home to the Winnipeg Blue Bombers, there were a variety of noteworthy responses.

The Bombers, figuratively speaking, huddled. That is to say, the team refused to provide details of the extent of the flooding or allow anyone to see the damage.

In doing so, team management showed once again its propensity to turn what should have been a simple act of public relations into an exercise in chainsaw juggling.

At city hall, meanwhile, Mayor Sam Katz did what he seems to do so well and so often these days: He blamed someone else for the mess.

It doesn’t matter if it’s tardy garbage collection, deficient snow clearing or cost overruns in major city projects, Katz’s default position is to deny any responsibility and point an accusing finger at someone else.

When you break down the allegations by Katz and Sheegl, and compare them to the facts, you quickly realize this is nothing more than an exercise in butt covering.

True to form, in a statement on Wednesday Katz slammed the Bombers and BBB Stadium Inc., the entity responsible for building and operating the stadium, for ignoring flaws in the design. “That’s just poor planning,” Katz said. “End of story.”

Sensing Katz was once again trying to find someone — anyone — to throw under the bus, Sport Minister Ron Lemieux waded into the debate, pointing out (rightly) the city was and continues to be a full partner in BBB. And during the period when the stadium design was being finalized, former Winnipeg chief administrative officer Phil Sheegl was the chairman of BBB’s board.

This prompted an improbable response from Sheegl, who only last fall resigned in some degree of disgrace from his job as top city bureaucrat, just days before an audit of the troubled fire-paramedic station program was released to the public.

That audit held him responsible for much of the mess.

Sheegl emerged from early retirement to back up Katz’s assertions, claiming BBB inherited deeply flawed, incomplete design plans purchased from David Asper, who had originally been the point man in the bid to build a new stadium. When Asper was bought out, BBB was created and took over the project based on the original design.

Sheegl further alleged BBB knew all along there were deficiencies in the stadium’s design, but they were dismissed by a provincial government desperate to get it built prior to the 2011 provincial election.

There are almost too many flaws in Sheegl’s claims to deal with in one column.

Although the NDP government did take political credit for building the new stadium during the 2011 election campaign, the structure was not completed until the spring of 2013. If, as Sheegl insisted, there were chronic flaws or omissions in the original design, there was more than enough time to address them.

In fact, given the fact the stadium was unexpectedly delayed for an additional year (from the original opening date of May 2012 until May 2013), one expects there would have been more than enough time to deal with deficiencies.

When you break down the allegations by Katz and Sheegl, and compare them to the facts, you quickly realize this is nothing more than an exercise in butt covering.

It should be said BBB is a deeply afflicted entity. From its inability to meet its original opening target of May 2012, to cost overruns, costly disputes with contractors, and the failure to anticipate and address traffic and crowd control issues, this has hardly been a smooth, flawless process.

The flooding is just the latest in a series of missteps that serve as evidence of BBB’s shortcomings.

How could a structure such as this be constructed without adequate drainage so precipitation, in whatever form, had somewhere to go other than the luxury suites?

It remains a mystery, thanks in large part to BBB’s inability to meet its legal and moral obligations — as stewards of a public amenity — for transparency.

However, none of that changes the fact the city is a full partner in BBB. That fact is what allows Katz to take political credit for building the stadium, something he has done repeatedly since sod was first broken at the University of Manitoba. It’s also the fact that holds the city and Katz responsible when problems arise.

When faced with a crisis, some people will step up, take whatever blame they have coming and then hunker down to find a solution.

Others, as we have seen in this story, turn tail and run as quickly and as far as they can from responsibility. 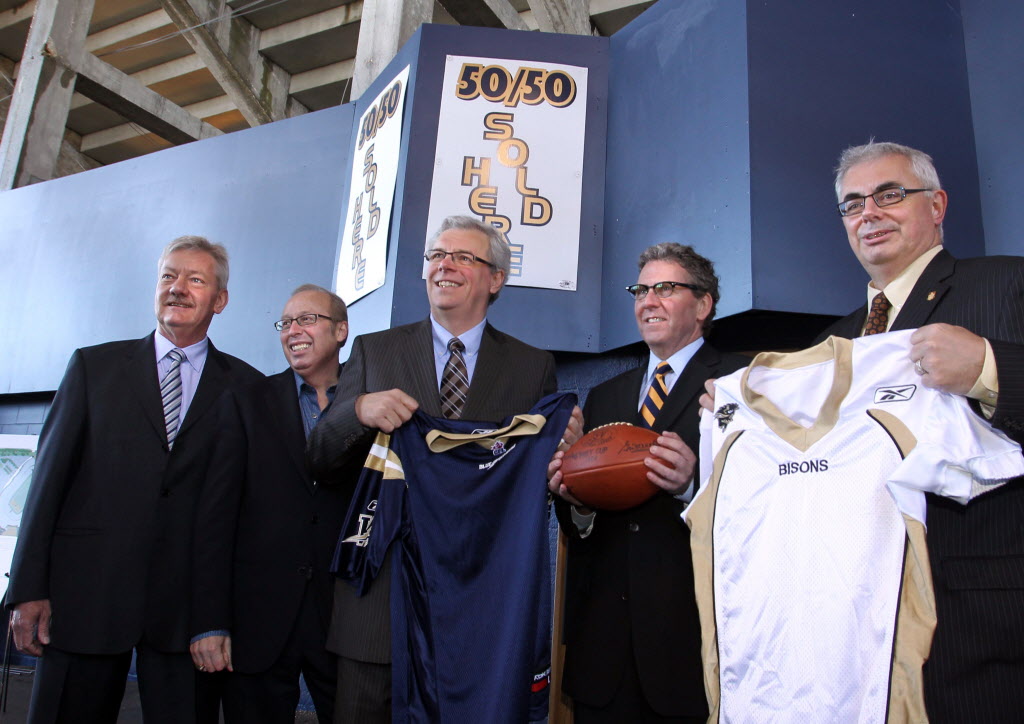