Key recommendations from Phoenix Sinclair inquiry yet to be implemented

Much work remains for CFS

The province is making slow progress on some of the biggest — and most expensive — child-welfare reforms recommended by the Phoenix Sinclair inquiry, nearly two years after it was released.

The province is making slow progress on some of the biggest — and most expensive — child-welfare reforms recommended by the Phoenix Sinclair inquiry, nearly two years after it was released.

Little tangible change has been made to reform a complex funding model that still encourages Manitoba Child and Family Services workers to apprehend children instead of preventing family breakdown. There has been no legislative change allowing child welfare to extend services and funding to foster children until they are 25 years old.

It’s unclear whether any progress has been made to ensure a child in care has just one worker, instead of many. And average caseloads are still well above the 20-case cap recommended by commissioner Ted Hughes, who headed up the inquiry into Phoenix’s death and the state of Manitoba’s child-welfare system.

The province has introduced legislation to bolster the role of the children’s advocate, though the changes fell short of Hughes’ recommendations. And the province essentially rejected at least one of Hughes’ proposals — that anyone practising social work be registered with the Manitoba College of Social Workers, the profession’s new regulatory body. Instead, the province decreed only employees with the words “social worker” in their title need register.

The new college has argued that move dramatically weakens the new legislation and undermines Hughes’ recommendation. Still, the college has 1,800 social workers registered after just nine months of existence.

Phoenix Sinclair, 5, was tortured by her mother and stepfather and left to die in the basement of her home in Fisher River First Nation in 2005. When it was released in January 2013, the massive Hughes inquiry into Phoenix’s death cost $14 million and made 62 recommendations to improve the child-welfare system that let her down.

A spokeswoman for Manitoba government said more than half of the recommendations have been implemented. It’s not clear which ones.

“We continue to reach out and engage community leaders, non-profit organizations, other departments and other levels of government to ensure the memory of Phoenix Sinclair is honoured through the conscientious improvements to the child-welfare system,” the province said in a written statement.

In January, to mark the one-year anniversary of the Hughes report, the province released a 230-page implementation report meant to lay out scenarios for action on half of Hughes’ 62 recommendations (the ones not already underway). Among child-welfare sources, the document was widely seen as a stop-gap measure meant to buy time.

But Sherri Walsh, commission counsel to the Phoenix Sinclair inquiry, said she has a more hopeful take.

“I do think the government is working hard at responding to the recommendation,” said Walsh. “It’s clear this report has not been gathering dust.”

Walsh said the province is paying particular attention — as it ought to — to the recommendations that deal with poverty as a key root cause of family breakdown.

Manitoba children’s advocate Darlene MacDonald said her office is also watching key recommendations closely and hopes to issue an update of its own early in the new year.

MacDonald said what’s also needed is a focus on stability for children in care. MacDonald said her office is still hearing too often from children who are moved from home to home, under the guidance of multiple workers.

“It’s still very much a crisis-oriented practice, which is very sad,” said MacDonald.

The dissolution of devolution 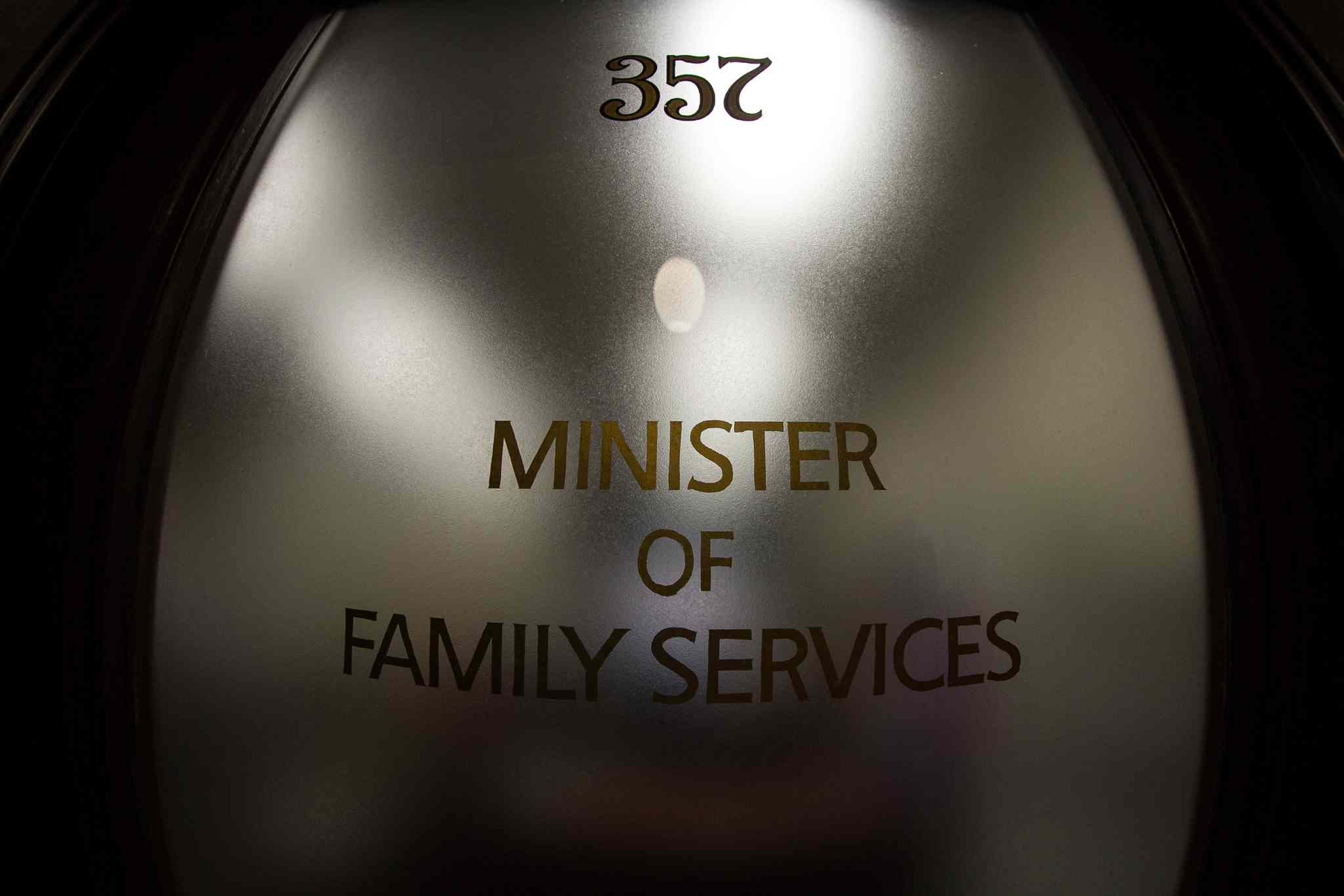 Cracks in the system

Anyone who practises social work in Manitoba, under whatever title, should be registered by the Manitoba College of Social Workers.

Status: not done. Social workers are only obliged to register with the new college if they have the words “social worker” in their title, which drastically shrinks the tally.

The watchdog agency should have its own legislation and the ability to advocate for children getting all kinds of publicly funded services, not just child welfare. And the advocate should be able to work for youth until they turn 21, not 18.

Status: underway, but a half-measure. Legislation now before the house gives the child advocate stand-alone legislation and boosts its scope, but not so much that it includes all children getting publicly funded services. For example, children being bullied at school can’t call on the advocate’s office for help unless they are in care.

A bachelor of social work or equivalent degree should be required of all social workers hired by agencies to deliver child-welfare services.

Status: unclear. The province says the authorities don’t keep statistics on the number of child-welfare hires who have BSWs, so it seems impossible to know whether this recommendation is underway. On the other hand, the Southern Authority’s latest annual report says 72 per cent of new hires at the authority’s 10 agencies were brought in at “Designated Level Worker 2,” which requires a BSW. That’s down a little from the year before, when 82 per cent met the DLW2 requirements. Some argue, though, a blanket call for every child-welfare worker to have a BSW is overly prescriptive and unnecessary. A social work grad might know far less about child welfare than someone who has worked for years with children in a related job.

Social workers doing either prevention or child protection should have no more than 20 cases per worker.

Status: not done. Front-line social workers say caseloads remain very high. Bringing caseloads down to 20 will require even more social workers in a system that can’t hire them fast enough. The province says average caseloads now stand at 25, and it is working to achieve the target set in the Hughes report.

The rules should be changed so children in care can keep getting services and foster parents can still get funding until the age of 25.

Status: not done. Youth can still only get extensions of care until 21, but the number of young people getting those extensions appears to be on the rise, with more care given to children aging out. The General Authority granted 20 more “extensions of care” in 2014-15. In the Southern Authority, the number rose to 411 in 2014-15, 127 more than the previous fiscal year. And the children’s advocate said she’s getting fewer calls from youth worried about their support and funding coming to an abrupt halt.

Legislation, including the Freedom of Information and Protection of Privacy Act should be fixed so social workers, police, teachers, doctors and others can share information about a child without being burdened by complicated privacy rules.

Status: not done. No legislative amendments have been proposed. Even proponents of more openness and information-sharing in the system say this is a tricky area since it’s difficult to legislate the fine line between sharing information in a child’s interest and breaching a child’s privacy.

The department should create a new database system to replace the cumbersome Child and Family Services Information System — the software that manages the case files of every child who comes in contact with CFS.

Status: underway, but slowly. The new software package is called Curam, and the province decided in 2008 it wanted it. In May, a “scoping” exercise for the new software was done. Now, the province is starting the detailed design phase. It’s not clear when Curam, originally thought to cost $50 million, will be in place.

Funding is still based on an artificial distinction. Children in care get one pot of money; families getting prevention services to keep their children out of foster care draw from another pot of money. But prevention should be embedded in all services, and the model still favours taking kids into care so they can access funding. The four child-welfare authorities (Métis, Southern, Northern and General) should be funded to a level that supports family enhancement. A good step would be to boost the $1,300 fund each family can draw from for support services. A next step is to work with the authorities and agencies to determine proper funding levels.

Status: no massive reform, but there are hints the province will increase the $1,300 fund to $2,100 — a move the child advocate said would be a good start.

One worker per child

Every effort should be made to ensure a child has the same worker throughout his or her involvement with the child-welfare system.

Status: unknown. The province could not provide an update on this recommendation.

The housing allowance provided by welfare should be increased to 75 per cent of median market rates.

Status: done. This was among the recommendations the Hughes report made that dealt with poverty and the root causes of children in care.

Cracks in the System

LOAD MORE CRACKS IN THE SYSTEM